In a forgotten corner of Yangon, a theme park feted by the former junta now lies derelict, with its residents facing an uncertain future. Win Htut Tin has an abandoned theme park behind his home, and it’s fair to say he’s a bit ungrateful about it. He stands at the back entrance of the grimy Yangon diner where he lives and works as a fry cook, unimpressed by the rusting rollercoaster tracks before him, which are slowly being swallowed by vines and tree branches.

Deeper into the thicket is an array of dead machines: a merry-go-round whose horses stare bleakly at their dilapidated surroundings, a pendulum “Viking” ship that is, confusingly, guarded by a life-size statue of a pirate, and bumper cars plonked gracelessly in the corner of the arena they once whizzed around.

Not that Win Htut Tin cares. “I don’t really go in there,” he says “It’s closed down and I’m afraid of the snakes.” Don’t you think it’s really cool, I ask him, that you have all these old rides here? He presses his lips together and shakes his head in silence. No, no he doesn’t.

His loss. There may or may not be serpents lurking in the dense shrubbery, but I think Yangon’s derelict amusement park is one of the most fascinating spots in the city. The boisterous children dancing along overgrown paths and clambering on the rides seem to agree.

“I’m not scared!” said one boy as he climbed to the apex of the rollercoaster track with his friend. The view is great. To the north-west, the tip of the Shwedagon Pagoda pokes through a deep-green canopy.

The plants tangled among the machines suggest the site was deserted before the fearless young rollercoaster climber was born, but the amusement park shut down only in 2012 or 2013, said an official at the neighbouring Yangon Zoological Gardens, who asked not to be named.

No one seems certain why it closed but his explanation is that the director of the company leasing the land failed to attend a meeting with the Ministry of Forestry to renew the contract because he was abroad.

Whatever the reason, its shuttering marked the end of one of the former junta’s less sinister projects. The opening ceremony in late 1997 was attended by some of the most powerful men in the regime. They included General Khin Nyunt, who was then Secretary-1 of the State Law and Order Restoration Council, and Secretary-2, General Tin Oo. The Japanese ambassador was there too. His country supplied the rides, which are still inscribed in places with Hiragana characters.

The junta seems to have hoped a flashy carnival was just the thing to distract a population living under the yoke of brutal military rule. State media declared the newly built park “a recreation centre for the people” and labelled it “world class”. They boasted of “modern games such as jet roller coaster, twister, motor boat, air balloon, indoor computer games and bumping car.”

Maybe it did distract people, a little. The park seems capable of evoking nostalgia in a country where many dislike dwelling on the past. Sam Aung Moon, who translated for us during a recent visit to the park, remembers going on the rides when he was younger. His attitude was refreshing compared to that of the underwhelmed fry cook.

“That’s the Rocket,” he said, pointing past the iron struts of the rollercoaster to a horrifyingly flimsy metal tower. The structure has two capsules attached to each end of a long metal shaft. The middle of the shaft is attached to the tower. The idea was that soft, squidgy humans would enter the capsules and be spun around like astronauts in training, but with less of the requisite safety regulations. “People with heart conditions weren’t allowed to get on,” said Sam.

The Rocket has spun its last spin, but some of the rides still kind of work. We asked Sam to hop into a capsule of The Twister, which tipped him back and forth in a lolloping motion. In the old days an engine would have simultaneously rotated all the capsules like a roundabout, but Sam enjoyed it all the same.

The pendulum ship still swings back and forth, if you push it. (Side note: the masterminds behind this park really did not know the difference between pirates and Vikings. One sign suggests the ship is the property of sea bandits with eye-patches, another that its crew are 10th-century Scandinavians with battle-axes.)

The lonely pirate guarding the pendulum boat (which is adorned with Viking helmets) is unarmed. His raised, clenched fist now encircles an empty gap that presumably once enabled him to grip the handle of a mighty sabre.

“He doesn’t even have a sword,” giggled Sa Nar Than, who lives in an abandoned karaoke bar on the edge of the park, as we approach the ship. Someone has taken pity and inserted a dried coconut tree frond in place of the old weapon. Sa Nar Than can do one better though. The 27-year-old plucks out the frond and replaces it with a long, sturdy stick from the ground. All the better to defend Viking ships.

“Me and my friends like to relax on the ship,” said Sa Nar Than. Rocking gently back and forth on a longboat is the ideal activity for them after they’ve worked up a sweat kicking a cane ball into the air by the merry-go-round. 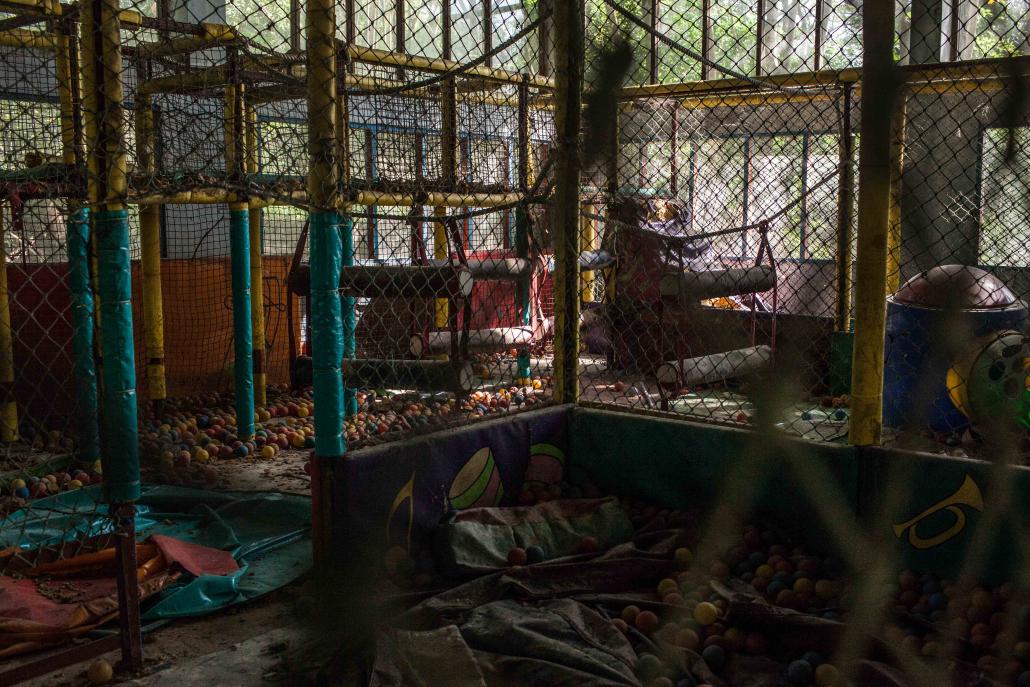 The ten-acre site no longer throngs with visitors, but the space still plays an important role in the lives of nearby residents. Dozens of people who used to work in the restaurants and entertainment centres on the southern fringe of the site have been allowed, unofficially, to continue living there after losing their jobs, said both Sa Nar Than and a man who described himself as a “watchman” for his uncle’s abandoned shop.

In the bumper car arena, we found a group of men sitting on a platform playing a card-game called Coconut. Later in the afternoon people gathered to play football in the vacant space. Small goalposts sit at both ends of the arena, and the low walls that once kept wayward racers from crashing into spectators now stop the ball from rolling off the pitch into the bushes.

The site has an uncertain future. Doh Pyi Thar Enterprises Ltd., the company that built it in partnership with the Ministry of Forestry, was dissolved earlier this year, according to opencorporates.com. The company’s on-site office appears to have been taken over by angry street dogs, which let out a chorus of vicious barks from inside the building as we approached one of the entrances (we made a swift U-turn).

The park was built on land that at the time was being used by the zoo, said the official I spoke to there. Gen Khin Nyunt wanted the theme park to be part of the same attraction, but a dispute over ticketing appears to have resulted in the companies in charge of each attraction running them separately. The land now belongs to the Yangon authorities, which are yet to put it out to tender, he added.

For the people squatting on the park’s periphery, that uncertainty threatens serious consequences. Nu Nu Htwe, 45, lives there after her last home was demolished to make way for a swimming pool at the hotel where she worked. She sees a similar future for her current home when people move in to dismantle it. “When the machines are removed we’ll have to go,” she said.