A hill station, a princess and a peace dividend

Blessed with panoramic views and steeped in Karen lore, Thandaung Gyi and its grassroots approach to tourism offer a model for other communities emerging from conflict.

IT’S a scenic drive of about 30 miles (48 kilometres) up through the hills from Taungoo to Thandaung Gyi, a former British hill station in Kayin State just over the border with Bago Region that is enjoying a revival as a tourist destination.

The outskirts of Taungoo give way to palm and banana trees, betel nut plantations and paddy fields. The road is reduced to one-way traffic as it climbs through tea and coffee growing country to the little town.

The British established Thandaung Gyi as a hill station in the 1850s. It is about 4,000 feet (1,220 metres) above sea level and its cool, clean air and attractive setting offering panoramic views has helped it to benefit, via a grassroots tourism initiative, from a “peace dividend” following the signing of a ceasefire between the Karen National Union and the government in January 2012, which suspended more than 60 years of hostilities.

After the ceasefire, PeaceNexus, an NGO, with help from Germany’s Hanns Seidel Foundation, consulted the government, KNU and community members about a livelihoods-based initiative that could best support the peace process. The outcome was the creation by residents of the Thandaung Gyi Tourism Development Working Group, which has supported the establishment of about a dozen guesthouses offering bed and breakfast accommodation. Thandaung Gyi is the only community in Myanmar where residents have been permitted to provide bed and breakfast accommodation.

We stayed at the I-Wish guesthouse, which was built in 1912 and has been run by the same Karen family for three generations. There are two large rooms at the front of the original building and simpler rooms in a new block at the back, all of which have hot showers.

The service is friendly, the breakfast hearty and guests can enjoy outstanding views across a valley to the nearby Bayintnaung military training base. One of the biggest in Myanmar, it looks weirdly picturesque in the distance.

I had travelled to Thandaung Gyi with my family to escape the first days of Thingyan in Yangon, before returning to the commercial capital for the finale. The other reason for the trip was to attend an event celebrating the life and death of a Karen princess and the sacred mountain connected to her violent demise. The annual celebrations were launched 24 years ago.

During the long years of fighting between the KNU and the government, Thandaung Gyi was a secure Tatmadaw garrison town. There was much fear in the community then but after the ceasefire in 2012 a more relaxed atmosphere prevailed because of the improvement, if only superficial, in relations between the KNU, Tatmadaw and Thandaung Gyi Township administration.

Thandaung Gyi, which is seemingly a string of hamlets, has many lovely old wooden houses and some even more impressive brick buildings that probably date to the colonial era.

An elderly woman told us that tea production had been disrupted during military rule but was making a comeback, together with coffee and cardamom. A colonial-era tea factory on a hilltop at the edge of town has been renovated and could be an asset, but currently produces little.

The years of conflict resulted in many Karen moving to Thandaung Gyi to escape the Tatmadaw’s brutal counterinsurgency tactics. After the ceasefire about a quarter of the town’s population moved down the hill to Thandaung, where there is more space and roads leading into Kayin State. 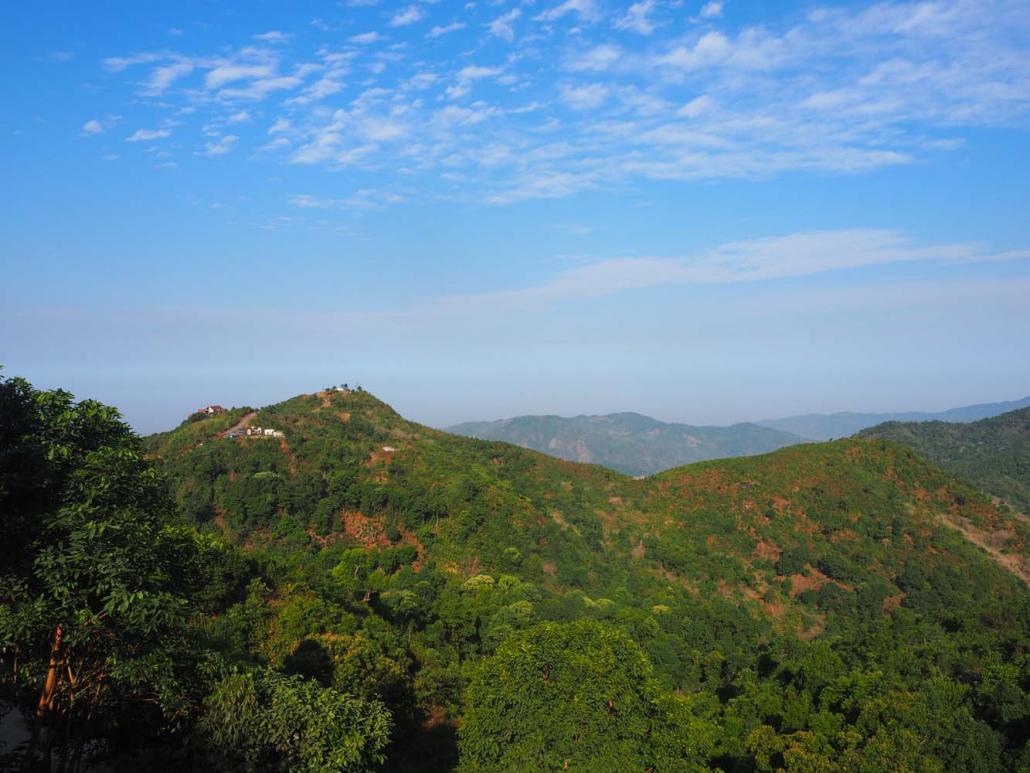 On the morning of April 13, we drove to the foot of Naw Bu Paw Prayer Mountain, which is 4,796 feet (1,462 metres) above sea level, and rises opposite its sister peak, the Karen New Year Mountain. We had attended the traditional New Year celebrations there two years earlier. There was traditional dancing and music, and the memorable sight of “male” and “female” bamboo poles, decorated with flowers and flags, being hoisted to the sound of Karen drums and horns as the sun rose over the mountains.

Our visit in April was to attend the anniversary of celebrations launched 24 years ago by the local churches to honour Naw Bu Paw, a Karen princess who long ago married a general in a king’s army and died a tragic death. The story of the princess is an ancient legend recounted in hta oral poetry. Before the recent “rediscovery” of Naw Bu Paw, animists venerated her as something akin to a nat at shrines in the area. Naw Bu Paw is a Karen culture hero, and her story is particularly resonant in this area, which has the greatest density of Karen languages and dialects. Her story, a mythic-historic narrative, plays a symbolic role in Karen culture that is recognised by and relevant to the different Karen subgroups.

Naw Bu Paw’s husband was magnificent in battle, not least because she had given him a magic comb that rendered him invisible. Magic combs are an oft-recurring Karen trope. Naw Bu Paw also had the power to multiply substances and objects, for example cooking a small amount of rice and using it to feed multitudes of people. Naw Bu Paw’s husband was killed by the last surviving enemy combatant after he prematurely removed the magic comb. The king accused her of witchcraft and put her on trial on top of the mountain, and she was executed nearby.

Stone steps lead the way to the summit of Naw Bu Paw Prayer Mountain, with wonderful views of the surrounding hills and the distant plain. Along the way are shrines, some handsomely decorated, which have been sponsored by pilgrims, often in memory of their parents.

The 24th anniversary service was ecumenical but decidedly Christian, led by a group of about six pastors and a retired Roman Catholic bishop. The service included speeches, songs by individuals and a choir, Bible readings and prayers, and ended with a brass band. There were a few foreigners but most of the congregation were from various Karen groups. Many people had perched on rocks and boulders to get a better view.

Shortly before the service started, two colonels, another officer and about 10 soldiers arrived from the nearby Tatmadaw base. The officers stood on the stage, joining the priest and the pastors. When the army men arrived, an initial ripple of fear spread across the congregation, many of whom still associate the Tatmadaw with death and terror.

However, the congregation seemed to appreciate the presence and participation of the Tatmadaw representatives at the service, which was conducted mainly in Karen with hymns and prayers in Burmese. It was extraordinary to see Tatmadaw officers singing Christian hymns in Burmese. There would have been enthusiastic participation from the congregation if the hymns and prayers had been in Karen. Although people sang, many were unlikely to read Burmese, and few were likely to have sung hymns in any language other than Karen.

After the service, the crowd gathered on the summit, under mostly clear skies and bright sunshine. As a kola-wah, or “white foreigner” in Sgaw Karen, I received many requests for photos. We also met some Karen family friends who, like us, had travelled up from Yangon.

A descent always seems easier and faster than a walk to a summit. At the bottom of Naw Bu Paw Prayer Mountain, we were presented with commemorative packets of uncooked rice. Auspicious and blessed, the rice would multiply material and spiritual blessings, as Naw Bu Paw did with her rice.

We met so many lovely people, but it helps that I speak some Karen and that my wife comes from a nearby area. It was wonderful to re-introduce our two boys to their Karen heritage.

The visit to Thandaung Gyi left some abiding impressions, including of a loving, resourceful, resilient, and sometimes quarrelsome Karen community, with high levels of “human capital”. Other impressions are of the beautiful and sad mythos of Naw Bu Paw, which has a unifying role among Karen Christians.

There is also the need for secure post-conflict livelihoods and developing a healthy local economy, which could be greatly assisted if the Kayin State authorities ended uncertainty over the future of the town’s guesthouses, which are operating on expired licences. The reissuing of licences to guesthouse owners would also reduce opportunities for corruption among influential local actors keen to muscle in on the tourism sector.

When the guesthouse project was launched in Thandaung Gyi it was envisaged as a model of a grassroots, eco-friendly approach to tourism. If the government indicated its continued support for this project, local livelihoods could receive an important boost, and the town could set an example for other parts of the country that are emerging from conflict.

After enjoying Thandaung Gyi for a few more days, we headed back to Taungoo and took a day-trip to another Kayin State hill station, at Leiktho, which is mainly populated by Catholics and features a beautiful waterfall on the end of town. Then it was back to Yangon for the last day of Thingyan.

TOP PHOTO: Soldiers from the nearby Tatmadaw base wear Karen tunics at a Christian ceremony on top of Naw Bu Paw Prayer Mountain in April 2018. (Ben Dunant | Frontier) 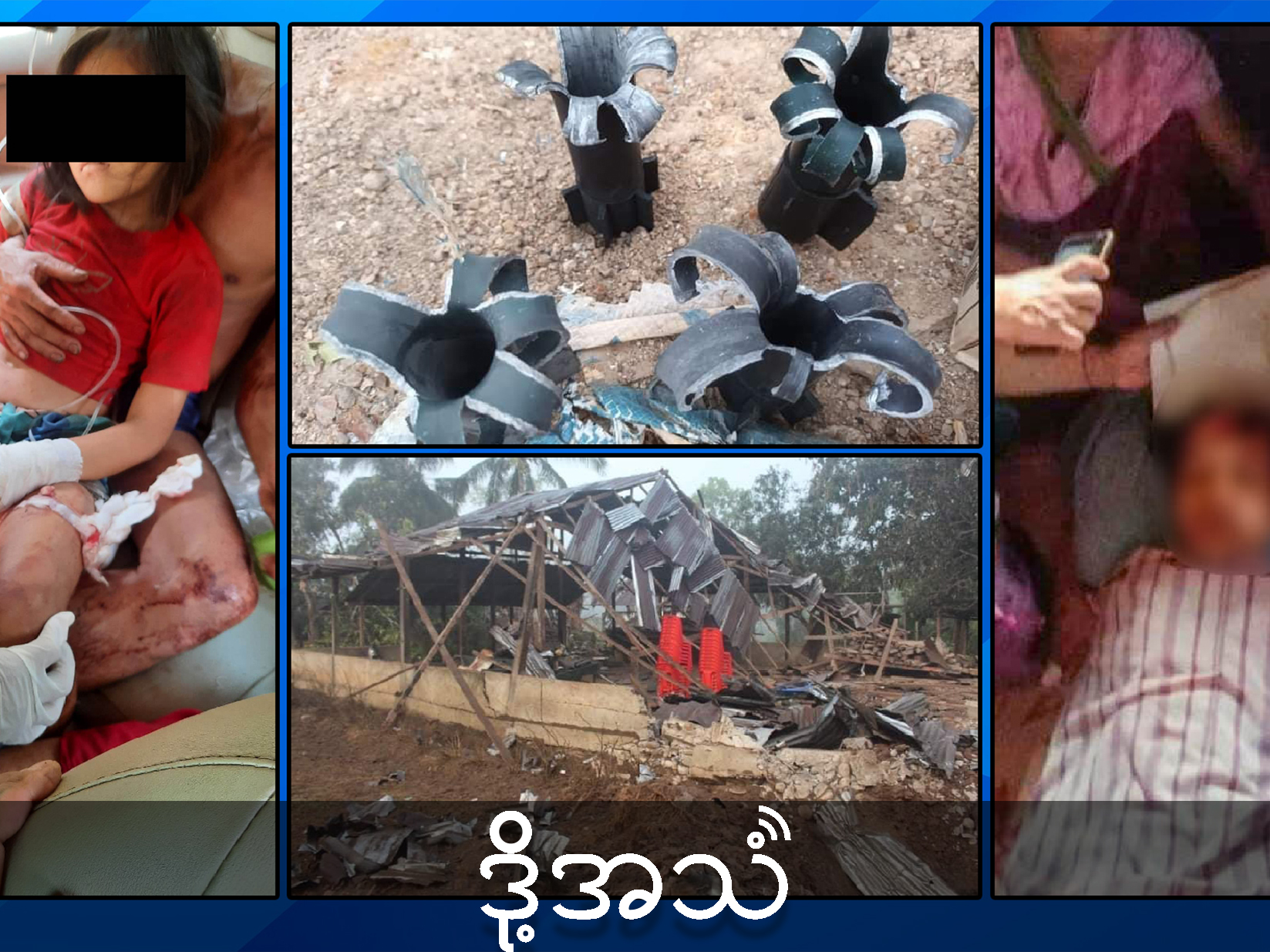