A deadly fight in Magway Region for the Ayeyarwady’s 'gold'

Villagers in Magway Region have blamed a riverside clash that left at least 30 people dead on an inadequate response by government officials to a dispute over rich alluvial farmland.

THE SANDBARS of alluvial soil that appear each year in the Ayeyarwady River and other waterways are so productive that farming communities are prepared to fight to keep them.

That’s what happened on an island in Magway Region’s Yenangyaung Township known locally as myay nu kyun (sandbar). On July 23, an ugly melee between the residents of two nearby villages left 30 people dead, nine missing, and the Ayeyarwady River stained with blood.

The residents of Phaye Kyun and Kantha villages, who had previously been friendly neighbours, fought with machetes known as dah, as well as spears, sticks and slingshots over the 2.8 hectares (seven acres) of cultivable land on the island. After the fighting ended, 29 residents of Phaye Kyun had been pulled dead from the Ayeyarwady, and nine remain missing. A Kantha villager also died.

What grievances motivated villagers who had lived together peacefully for years to fight each other over 2.8ha of land? What was the trigger for their bloody confrontation?

The island emerged from the river between the two communities around 1998. As it was initially closer to Phaye Kyun, which is located on the mainland just north of the town of Yenangyaung, Phaye Kyun’s residents began cultivating the land in 2003, according to local officials.

Crop yields from the rich alluvial soil are up to five times that of normal land, said Phaye Kyun resident U Bo Thein, who has farmed the land since 2016.

“You don’t need to use fertiliser; the soil produces genuine organic products,” he said. “For farmers, this alluvial soil is gold.”

Bo Thein said vegetables and flowers are grown on the island. “If all 2.8ha is cultivated, we can earn K90 million from the sale of agricultural produce,” he told Frontier.

The residents of Phaye Kyun farmed the island for 15 years, until 2018. A contributing factor to the dispute is that there are no documents that prove that residents of the village own the land that is submerged beneath the Ayeyarwady from around July to November each year.

U Zaw Win, head of the Department of Agricultural Land Management and Statistics in Magway Region, acknowledged that Phaye Kyun residents had farmed the land for many years but it was difficult to say they owned it because no official survey was ever conducted. 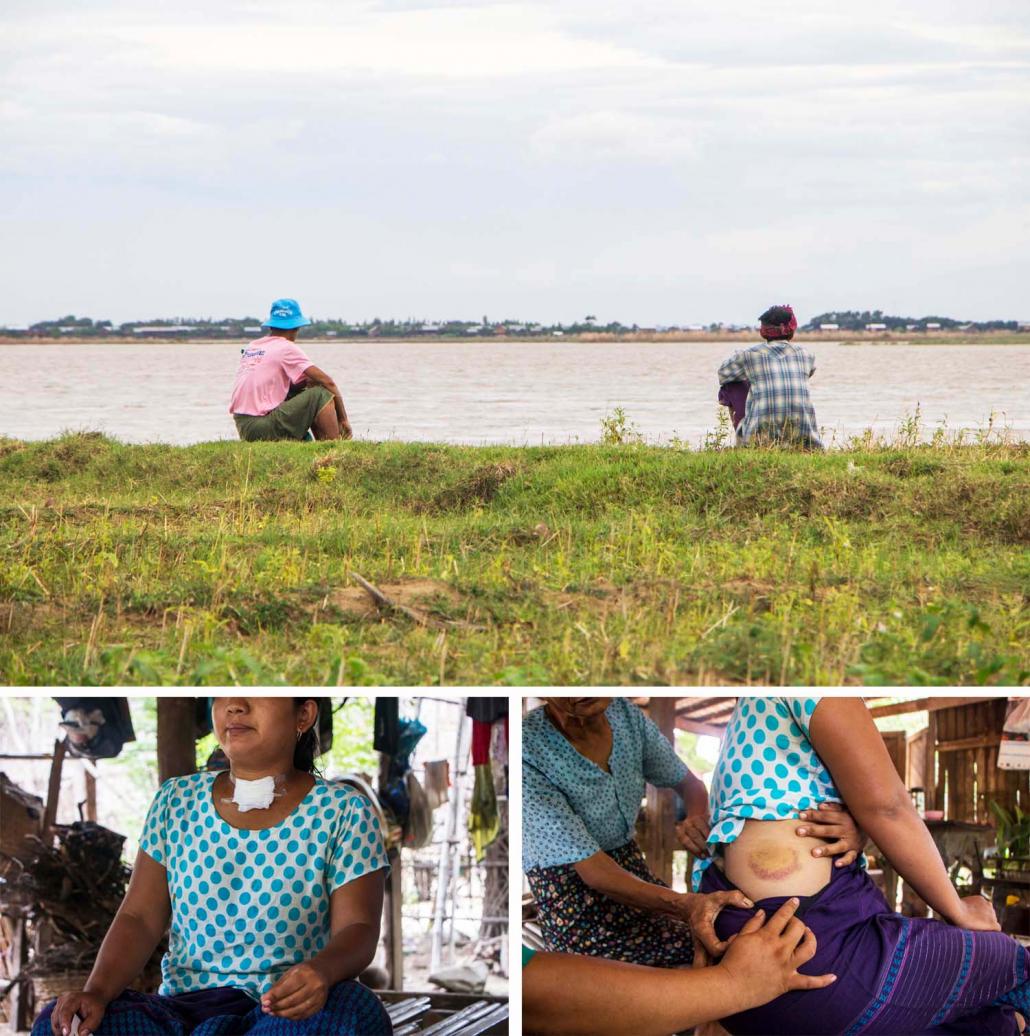 Tensions began simmering between the two communities in August 2018, when a Kantha man built a house on the island. Phaye Kyun residents complained to the township General Administration Department office. They say that no action was taken.

“More and more houses were built on the island,” recalled U Myo Zaw Than, the administrator of Phaye Kyun village tract.

U Than Oo, his counterpart in Kantha village, located on Kyankaing Island to the south of myay nu kyun, said its residents had begun moving to the island after experiencing land loss because of riverbank erosion.

“The riverbank collapsed and we were forced to move to the island, otherwise we would have drowned,” he said.

Visiting Kyankaing Island, Frontier saw the threat that the village faced from erosion. Over the years the destruction of the riverbank has caused the loss of many acres of farmland, and homes, monasteries and pagodas have been forced to relocate. Those that remain are wedged in against the riverbank, facing an uncertain fate.

The riverbank was so unstable that it was dangerous to walk too close to the edge. In the water there were large trees that had toppled over when the soil around their roots had washed away.

Phaye Kyun residents say that in 2018 they wrote twice to the Yenangyaung Township GAD to complain about the situation, and also wrote to the Magway District GAD and the Ministry of Border Affairs. They sent the first letter on August 20 – just a day after the first house was built on the island.

Township GAD records show that officials travelled to the island five times during 2018 but attempts to end the dispute made little progress.

When it seemed clear that the government was not going to resolve the dispute, Phaye Kyun residents decided to take matters into their own hands. On July 13, about 100 villagers gathered on the island and began demolishing houses built by Kantha residents.

“It is true that we acted in breach of the law,” said U Than Htay, a former administrator of Phaye Kyun. “We tried to resolve the situation in line with the law but nothing happened and the villagers became dissatisfied.”

Kantha administrator Than Oo said a complaint was lodged with Yenangyaung Township police about the demolition of the houses but no action was taken. 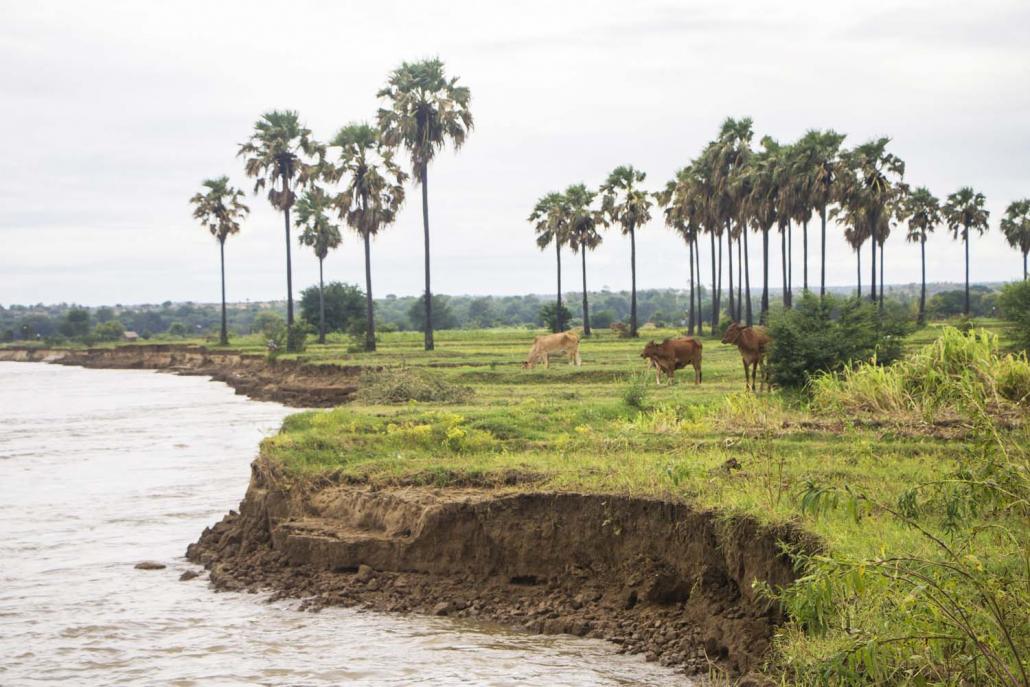 Kantha residents say they were forced to move to the alluvial island because their land on Kyankaing Island (pictured) was lost to erosion. (Thuya Zaw | Frontier)

Tensions escalated and on July 23, a group of Phaye Kyun villagers travelled by boat to the island with the intention of driving away the Kantha people, who launched a counter-attack.

“We were beaten like dogs when we landed on the island,” said Phaye Kyun resident Ko Nyein Chan. “We could not retreat, because of the river, and if we tried to climb up the riverbank, we were overwhelmed by our attackers, who beat us and chopped us with dah,” Nyein Chan told Frontier.

The outnumbered Phaye Kyun villagers were eventually able to clamber aboard their boat but it soon capsized, leaving 38 missing. Twenty-nine bodies were later pulled from the river. Myo Zaw Than, the Phaye Kyun administrator, said another 18 residents were injured in the fight.

Although the police and regional government initially attributed all of the deaths to drowning, on August 5 an officer from the Yenangyaung township police force told Frontier that a forensic investigation had revealed three people died as a result of injuries incurred in the fight.

“Our boat sank and our villagers died and they are entirely responsible,” said Ma War War Lwin, who suffered a nasty spear wound in the neck during the clash.

“We fought them because we did not want to abandon our land,” said Than Oo, the Kantha village administrator.

While the two communities blame each other, they also attribute the tragedy to the failure of government agencies to resolve the dispute.

“It is true that we are guilty of solving this problem outside the law, but I wonder if the government and administrative bodies are also culpable; they did not solve the problem and because of that many people died,” said former Phaye Kyun administrator Than Htay.

The 2012 Farmland Law provides for township farmland management boards, under the GAD, to designate which villages near alluvial islands have the right to farm them. It is not clear why the relevant board did not exercise its authority in relation to the dispute.

U Mang Kho Hao, the administrator of Yenangyaung Township, said there had been a plan to survey the disputed land in a bid to end the dispute. “But they could not wait any longer and that’s why this tragedy occurred,” he told Frontier.

Than Oo said the government had more than enough time to conduct the survey. “They [officials] did nothing for a year so the villagers solved the problem their way.” 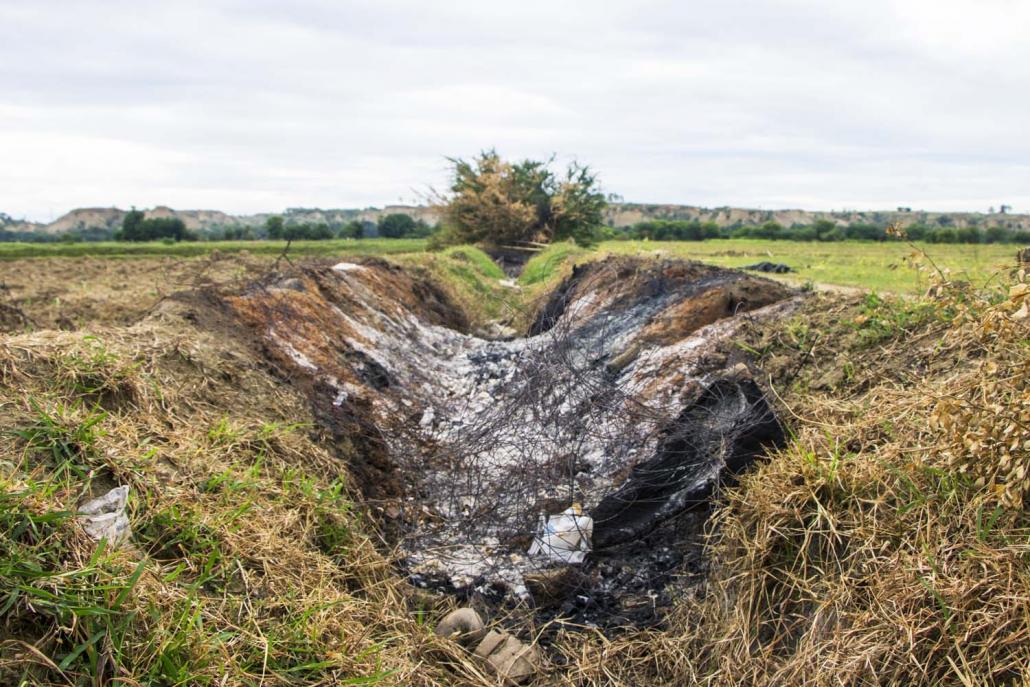 A ditch near Phaye Kyun where the authorities hurriedly cremated the bodies of residents who were killed in the fighting on July 23 or subsequently drowned. (Thuya Zaw | Frontier)

At a news conference on July 25, Magway Region Chief Minister Dr Aung Moe Nyo blamed the bloodshed on the failure of the two villages to abide by the law.

An 11-member commission headed by U Myint Swe, the regional minister for labour affairs, was appointed to investigate the dispute. It was initially instructed to release its findings by August 5 but the deadline was waived when it became obvious that the investigation would not be finished in time, said a commission member who asked not to be named.

“We will investigate who led the fighting and who were the agitators. If it is found that the relevant departments failed to take responsibility or make a timely decision, action will be taken against them,” the commission member said.

Police have responded by filing cases against four Kantha residents for murder. Three other residents are facing several charges, including attempted murder and voluntarily causing grievous hurt with a dangerous weapon.

U Than Kyaw Htay, a lawyer who specialises in land-related laws, said disputes over alluvial islands were common along the Ayeyarwady but he had never seen anything as severe as the July 23 incident.

“There are laws relating to alluvial islands, but the right decisions have not been made in this case,” he told Frontier.

Myo Zaw Than said the dispute had destroyed the friendly relations that had existed between the two villages and he worried about the future.

“Seven acres on an alluvial island is valuable for our farmers, but it is not more valuable than human lives,” he said. “Those people died because there was no government management in accordance with the law.”