A day of tension and drama as nationalist protests flare

Hours before authorities decided to shutter four Islamic schools in Thaketa, controversial monk U Wirathu was part of a 100-strong crowd that attended a trial for nationalist protesters in Kamaryut.

ON APRIL 28, a group of monks and laypeople declaring themselves nationalists forced the closure of four Islamic schools in Thaketa Township’s Anawmar 1 ward. The closure came just hours after the first hearing in the trial of several prominent nationalist leaders.

On hearing the news of the schools being sealed, most people seem to think the incident resulted from a dispute between local Buddhists and Muslims in Thaketa, but based on Frontier’s observation of events throughout the day, the incident in Thaketa was instigated by external actors. We have presented the incident in a timeline format to enable readers to decide for themselves.

Clerks at Kamaryut Township Court confirmed that the first hearing in the trial of several monks and laypeople facing a charge under section 505(b) of the Penal Code for staging a protest outside the United States embassy in Yangon on April 28, 2016, would be heard that day by Township Judge Daw Thanda Shin.

The charge relates to making, publishing or circulating any statement, rumour or report “with intent to cause, or which is likely to cause, fear or alarm to the public or to any section of the public whereby any person may be induced to commit an offence against the state or against public tranquility.”

It is the second charge they have been hit with as a result of the protest, which was related to the Rohingya issue in Rakhine State. They are also facing trial for allegedly violating section 19 of the Right to Peaceful Assembly and Peaceful Procession Law.

Supporters of the defendants began gathering at the court around 9am.

More than 100 monks and laypeople, many dressed in white shirts and longyis, arrived at the court. Soon after, controversial monk U Wirathu arrived and was cheered by the group. 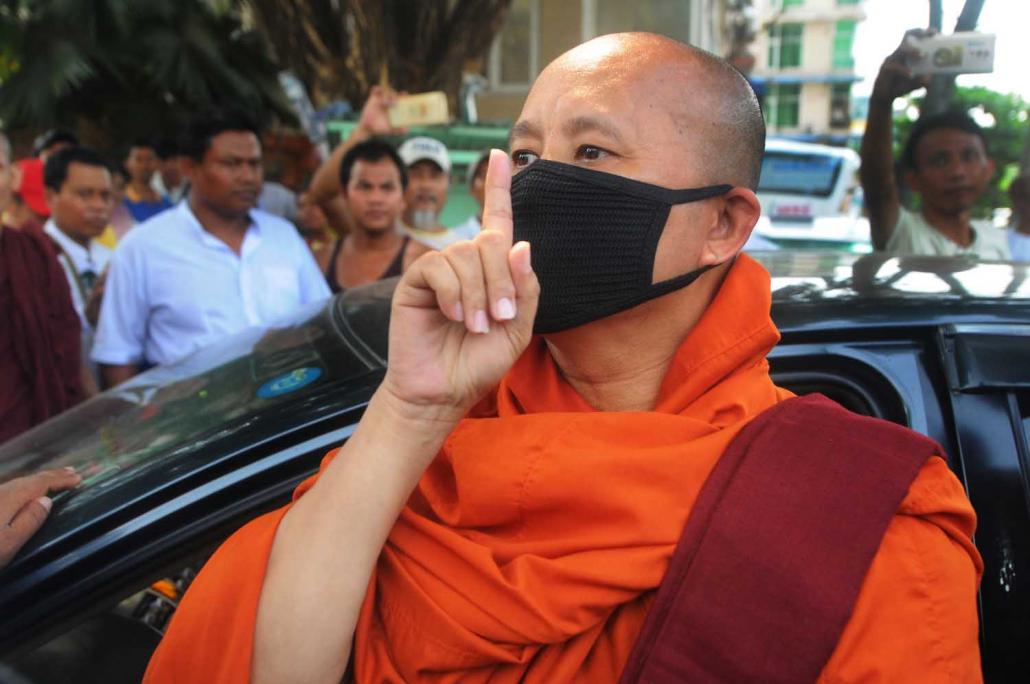 Ko Sai Zaw Thike, a photographer for 7Day newspaper, tried to take a photo of Wirathu, but was pushed and shouted at. He moved away and sat at a nearby teashop, where about half a dozen people from the protesting group approached him and questioned him in an aggressive manner. Wirathu then walked away from the court, towards a nearby monastery.

Judge Thanda Shin began the trial at 2pm. All those facing charges were present, except Parmaukkha. Unlike in other trials, the judge did not sit at the bench, but instead removed her shoes and stood where the lawyers usually stand. She explained the case to the defendants in a gentle manner, then said that she was moving to a new posting in Nay Pyi Taw and that a new judge would oversee the trial. The hearing was postponed until May 12.

Nyarna Dhamma and Thu Saitta said it was “oppression” to charge them, and that anyone who sought to lay charges against monks must first get permission from the township branch of the Sangha Nayaka, which regulates the clergy. They claimed that any judge who accepted a case against monks without seeking permission from the authority was neglecting the law. The judge responded in a gentle tone and said she would act according to the law.

One of the monks present told reporters to make sure they write accurately about the trial.

The protesters applauded and cheered the defendants as they left the court.

Wirathu then walked back to the court from the monastery with a black mask covering his mouth – a protest against a recent decision by the State Sangha Maha Nayaka Committee to ban him from delivering speeches for one year. When he arrived at a car that was waiting to transport him, he removed the mask to reveal black and red tape over his mouth and raised an arm above his head in apparent triumph. The crowd cheered and began singing “Nationalism must win”.

After the defendants left the court, Frontier heard members of the group saying they would travel to Anawmar ward. Win Ko Ko Latt, a defendant and one of the country’s best-known nationalist activists, told Frontier that he wasn’t part of the group travelling to Anawmar and that he didn’t know who the leader was.

Members of the protesting group left Kamaryut and began arriving at the General Administration Department office in Anawmar 1 Ward, Thaketa Township. Three monks and other members of the group then spoke to a local GAD official and demanded that Islamic schools in the ward be shut down, saying the schools could be used for education, but not for praying.

The argument was led by a monk who arrived in a car with yellow-coloured number plates – for cars registered by religious institutions – and a sticker for a monastery named as “Taung Thar Lay”. There were about 100 monks and laypeople present.

The GAD officer told the group that he did not have the authority to close the schools. The crowd then grew bigger and the administrator said he would report the complaint to his superiors.

The administrator and a police officer arrived at the GAD office to meet the group. Soon after, a monk known to be the general secretary of the local township monk authority also arrived.

The group then removed all media from the GAD office, but videos shared on social media show the monk from the local township trying to negotiate with the group, telling them that the matter should be dealt with systematically in collaborating with other religious leaders. But the protesters were insistent that the schools be closed immediately. Police Colonel Myo Swe and more members of the protesting group arrived at the office. 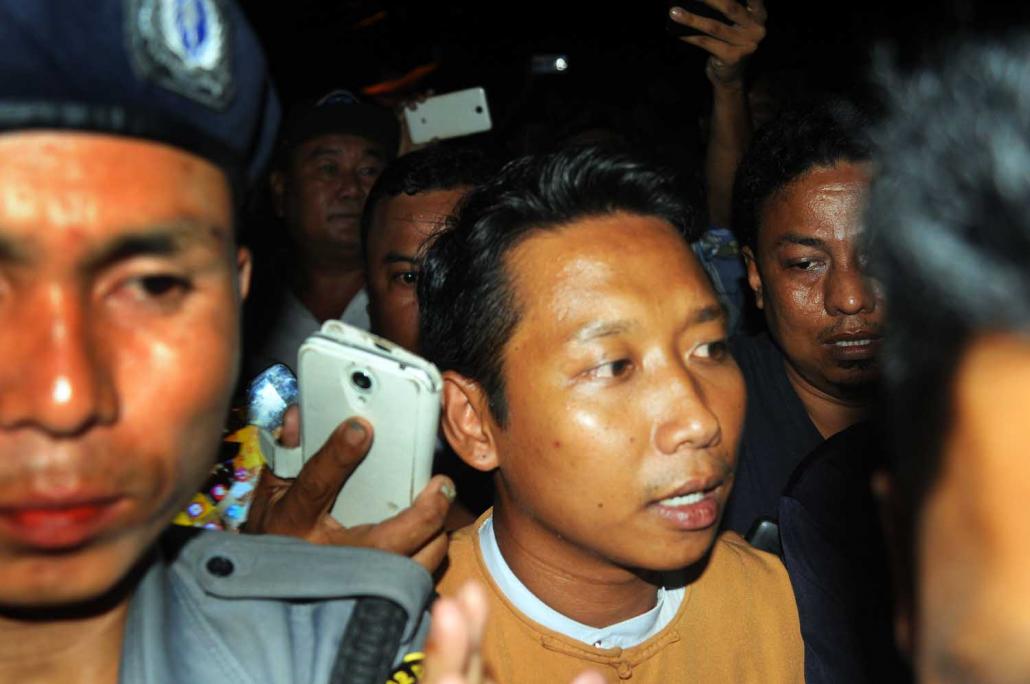 NLD Pyithu Hluttaw MP for Thaketa Township U Wai Phyo Aung arrived at the township’s GAD o ce in the early evening, but refused to condemn the actions of the protesters. (Steve Tickner | Frontier)

Ko Min Kyi Thein, a broadcast journalist for Associated Press, began taking footage at the front of the administration office and asking questions. The group responded that the media is not reliable and an argument followed.

Min Kyi Thein then addressed a monk in a manner that is supposed to be used for laypeople – in Myanmar, it is respectful to address a monk in a different manner than laypeople – and was shouted at. He was then hit with an umbrella by one group member, and kicked by another. Then unrest occurred and the police intervened, blocking off media access to the administration office.

U Wai Phyo Aung, the NLD’s Lower House MP for Thaketa Township, arrived at the office and news emerged that a decision had been made to close the four Islamic schools in the ward: those at Anawmar East 4th Street, West 7th Street, West 11th Street and East 12th Street. Police prevented media from taking footage of them shutting the schools.

The schools were closed by 7pm and a small group of Muslim residents complained about the decision to Wai Phyo Aung, who refused to comment.

There are about 1,000 students in total at the four schools, said Ko Tun Tun Win, who taught at the school on West 11th Street before it was shuttered. He told Frontier that his school had permission to act as an education and religious site since it had been relocated from Pazundaung Township in 1958. The other schools only had permission for education, he said.

“They destroyed our peaceful existence, I feel very sad,” said a Muslim administrator for one of the households in the area, who spoke to Frontier on condition of anonymity. “They did it [closed the schools] even though we didn’t make any problems. Anyone whose place for prayer is closed would be sad.” 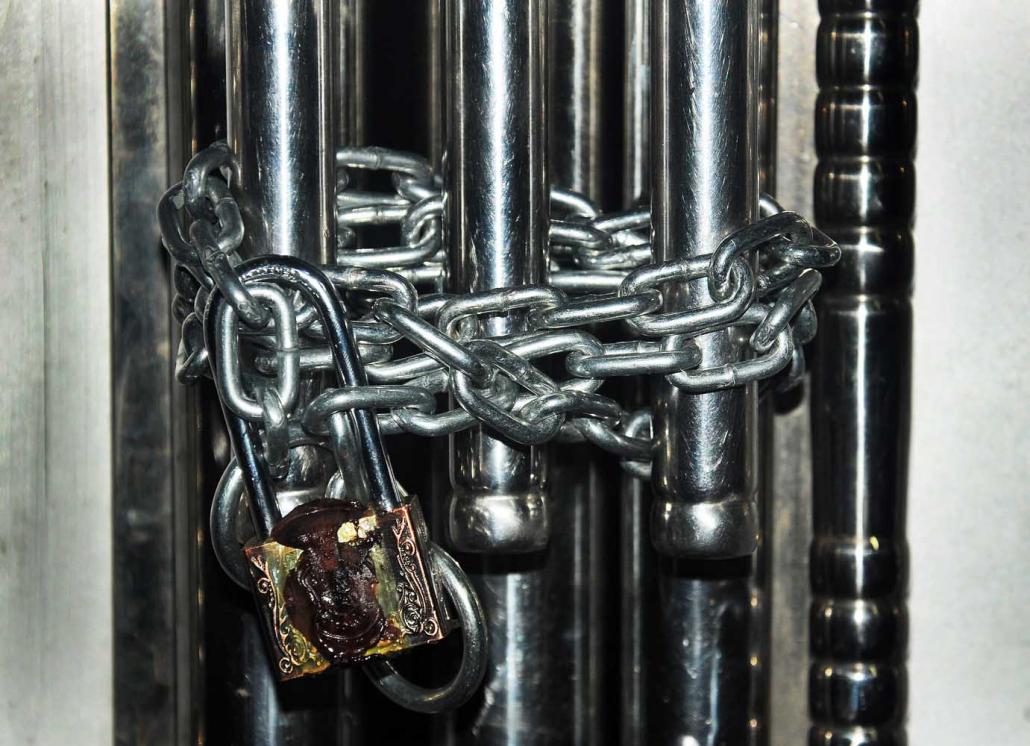 The padlocked gates to one of the Thaketa schools shut over the course of the protest. (Steve Tickner | Frontier)

Residents from the Buddhist and Muslim communities in Anawmar 1 ward said that the protesters had all been outsiders, and that no local residents were involved.

“We are not that rude,” said a local Buddhist resident. “We have been staying here a long time and nothing like that has happened. It is not good,” he said, referring to the behaviour of the protesters and the decision to shut down the schools.

Myo Swe said the police were only there for the security purposes, and it was up to the administrative body if they want to charge those who caused the unrest.