The former ruling party responds to questions about funding, citizenship and Rakhine State at its first news conference since a far-reaching leadership reshuffle last year.

THE Union Solidarity and Development Party held a news conference in Nay Pyi Taw on May 12 at which journalists had a rare chance to quiz senior officials on key issues.

It was the first time USDP officials had faced the press at such an event since a party conference last August that saw most of its leadership replaced.

All of the party officials at the news conference were newly elected to the leadership last year. They were Dr Nandar Hla Myint (spokesperson), U Hla Thein (central committee member) and central secretaries U Pike Htwe, Dr Pwint Sann and U Tin Aung Chit.

Does the USDP intend to reveal the source of its income?

Tin Aung Chit: Have existing organisations, [political] parties, government bodies, MPs and the people who were calling for it [during the previous government] already publicly revealed their sources of income? If they have, we will not hesitate to publicise our sources of income.

Nandar Hla Myint: The first thing I’d like to say is that there are allegations that USDP has used public funds and that it has acquired land, buildings and funds through the use of public funds. My question is, just what exactly is the definition of public funds?

When looking for land [to host events] we submitted requests [for land grants] … We were provided with grants, according to the law. We collected and saved donations from party members. By collecting funds and donations from citizens and businesspeople who supported us, we were able to build our offices [around the country]. We did not receive any state funds. We did not receive any government funds. We did not confiscate anyone’s land.

We are being accused of using public funds. How exactly can these funds be defined? People say they are state-owned properties. Well, it’s true. The previous government might have implemented the procedures when we applied for the possession of the vacant lands. However we didn’t build the office with the state funds. If there is [evidence that we did], I want [our accusers] to point out exactly.

What is the USDP’s opinion about the situation in Rakhine State?

Nandar Hla Myint: What I’d like to say is that despite the fact that there are different religions and races in Myanmar, everyone is entitled to citizenship rights if they qualify to be a Myanmar citizen. But it must be in line with the law. Everyone who meets the criteria of the verification process under the 1982 Citizenship Law qualifies for citizenship. Those who do not cannot be citizens. 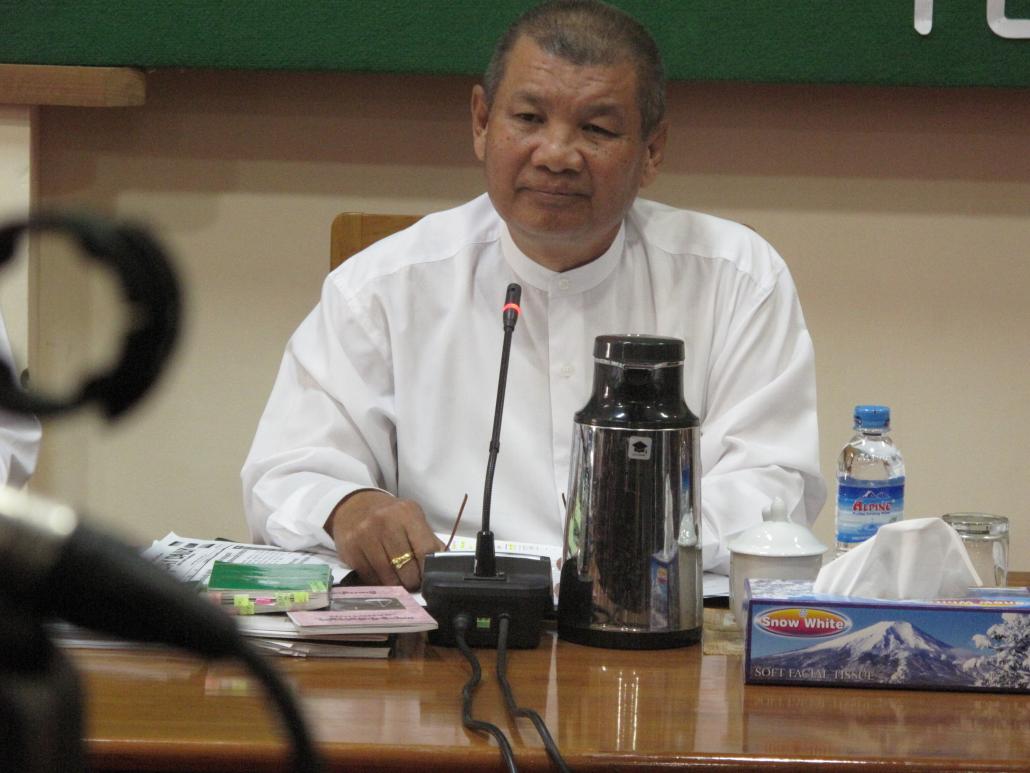 The USDP has attracted criticism over the citizenship issue because some say it did not try to solve it while it was in power but is now saying that the matter is important. What is your response?

Hla Thein: There is a great difference between the situation in our time [the USDP government] and now.

We tried to solve this issue with the policy of solving domestic problems in the country. However this domestic problem is being made worse by a group formed by foreigners. You media might know to what extent this has been happening.

Everyone can see that this issue is still being influenced by international organisations getting involved in this domestic issue. Therefore we did a lot better than the current [government].

Please give a comparison between what the USDP government did to try to resolve the situation in Rakhine and what is happening under the current government.

Hla Thein: The situation facing the current government over this issue has changed compared to the situations faced by governments since 1962. If we look at this issue, I don’t want to refer to armed groups such as the Kachin Independence Army whose members, citizens of this country, attacked military bases because of their own discord.

However, in the time of the USDP government, we never experienced our west gate [border] being breached and attacked [when militants attacked border police posts in Rakhine on October 9 last year]. It never happened before.

During the time of the previous government, President U Thein Sein officially denied the existence of the Rohingya to the world. There are no Rohingya in Myanmar. We cannot accept their existence. Previous governments handled this issue in their own ways according to the law and achieved stability. However this domestic issue has become an international issue. The current government apparently thought that [former United Nations secretary-general] Kofi Annan would be suitable for handling this issue and to gain the trust of the international community it appointed him [to head the Advisory Commission on Rakhine State] to solve this problem.

As a result of meetings between the commission and them [Rohingya], they gained more privileges and conflicts broke out. The State Counsellor [Daw Aung San Suu Kyi] has herself officially rejected the decision of the United Nations [Human Rights Council to send a fact-finding mission to Rakhine to investigate allegations of human rights abuses by the security forces in an operation launched after the October 9 attacks].

The main difference is that the former officials in that area managed to take responsibility to ensure those areas were peaceful without damaging the national economy of our people.