Youth rush to help households as 10,000 affected by Myitkyina flooding

With water rapidly rising in several quarters of Myitkyina and residents packing and preparing to move, former drug users from the Care Hands Youth Reform Organisation, known in Jinghpaw as Ram Hkye Shalat, travelled to flood-affected neighbourhoods to help people move their possessions to safety.

Brang San, 20, was working with a team of 12 at the home and art gallery of Nhkum Brang, in Shatapru ward, to carry the painter’s work to higher ground on Friday night.

“If the water comes, we will move everything,” he told Frontier. “We will do what we need to do to help, even if it takes the whole night.”

On July 10 the Department of Meteorology and Hydrology issued a flood warning, which said the Ayeyarwady River was within a few feet of reaching danger levels in Myitkyina, Bhamo and Shwegu.

The department also warned that the river could reach these levels within two days in Myitkyina and Shwegu, and three days in Bhamo, and urged people in low-lying areas to take precautions. 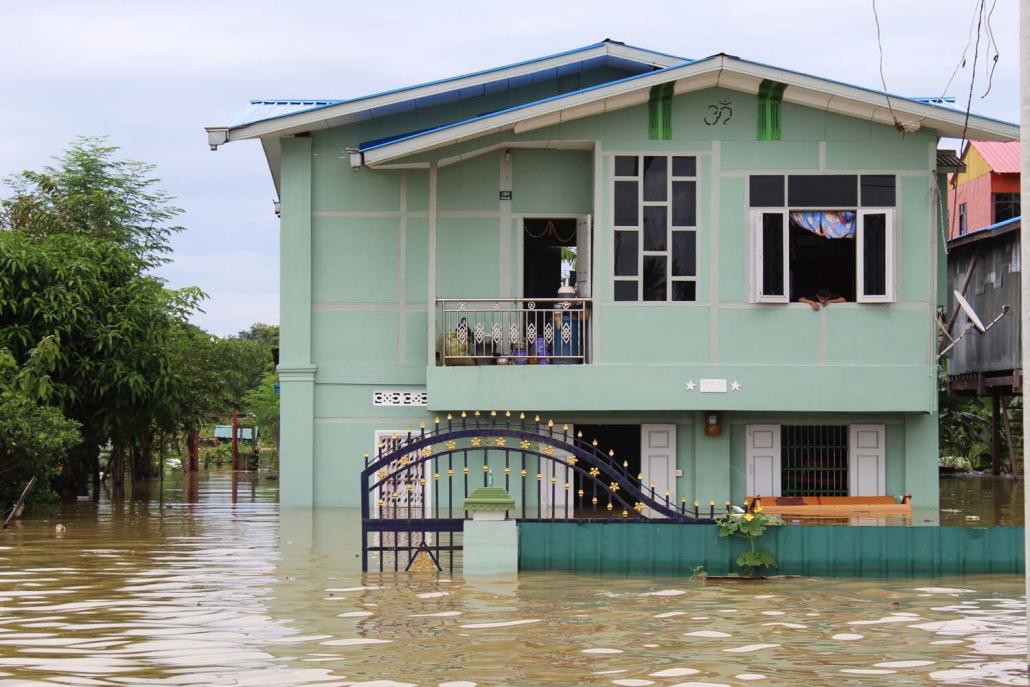 A boy leans out of the window of his flooded home in Gyet Poung Chan ward. (Emily Fishbein | Frontier)

By July 11, much of Kachin National Manau Park in Myitkyina was submerged and the main gate was impassable. By the following evening at the park’s riverside Lung Ga Pa Kachin Traditional Restaurant, only the thatched roofs of the restaurant’s huts were visible.

Frontier saw flooding at two points along the key access road to Myitkyina airport, though flights continued. The fields between Shatapru and Tatkone wards were fully submerged; nearby roads were lined with pigs tied to poles and fences, their pens flooded over.

By Saturday evening, the water was receding, according to the Kachin State Government Office’s Facebook page, which said that 10,303 people from 2,035 households had been affected, and that the flooding was caused by continued heavy rain in the northern Kachin townships of Putao, Hsawlaw, and Machanbaw, leading to a rise in the Ayeyarwady tributaries, the Malikha and N’Mai Kha rivers, which meet 45 kilometers north of Myitkyina. 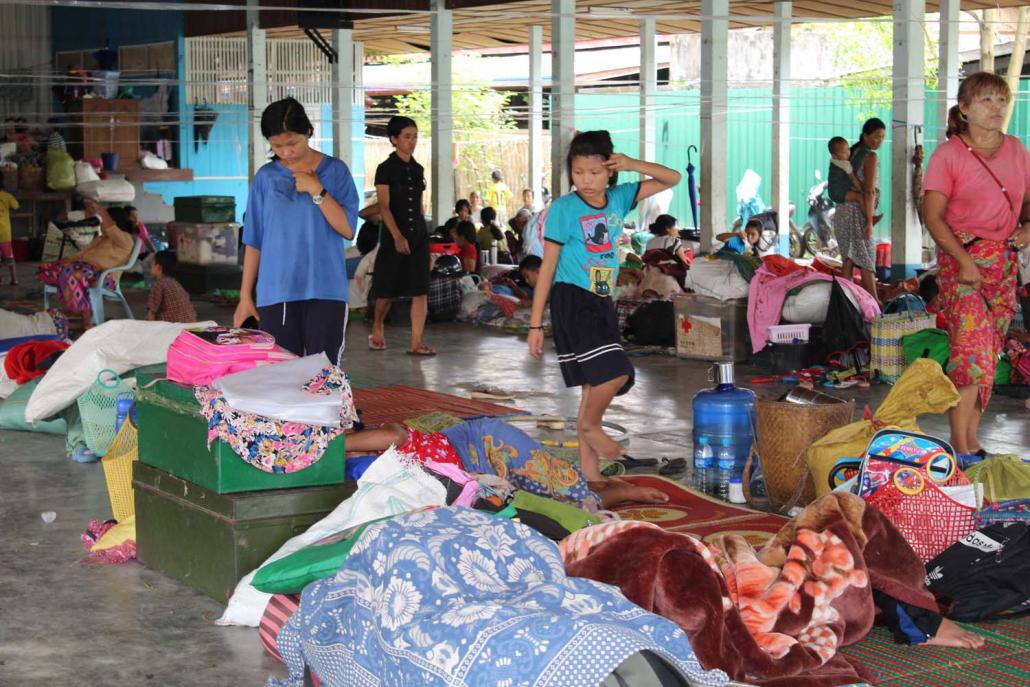 The flooding, which exceeded 12 metres, was the worst to afflict Myitkyina since 2004, when it reached more than 14 metres, according to Eleven Media.

On July 13, Frontier accompanied about 40 Kachin youth as they traveled to flood-affected areas to deliver bottled water.

Volunteer Wun Zup Aung said he and other young people regularly convene for volunteer activities on short notice, connecting over phone and Facebook. He said the volunteering work is valuable not only for helping the community, but also for connecting Kachin youth through a meaningful activity.

The group’s first stop was Ziun Kachin Baptist Church in Lay Gone ward, where 682 people had relocated the night before from Ziun IDP Camp with help from the state government, according to camp manager U La Mai. Inside, the displaced people lined the floor in rows, their belongings piled in burlap sacks, awaiting a lunch donated by the church.

After delivering water to the IDPs, the youth waded through thigh-high water along the ward’s back streets, checking on those who had stayed in their homes.

Next, the youth traveled to Gyet Poung Chan ward, where vast swathes of land were under water. Renting a speedboat, they passed half-submerged homes and a flooded Union Solidarity and Development Party office. 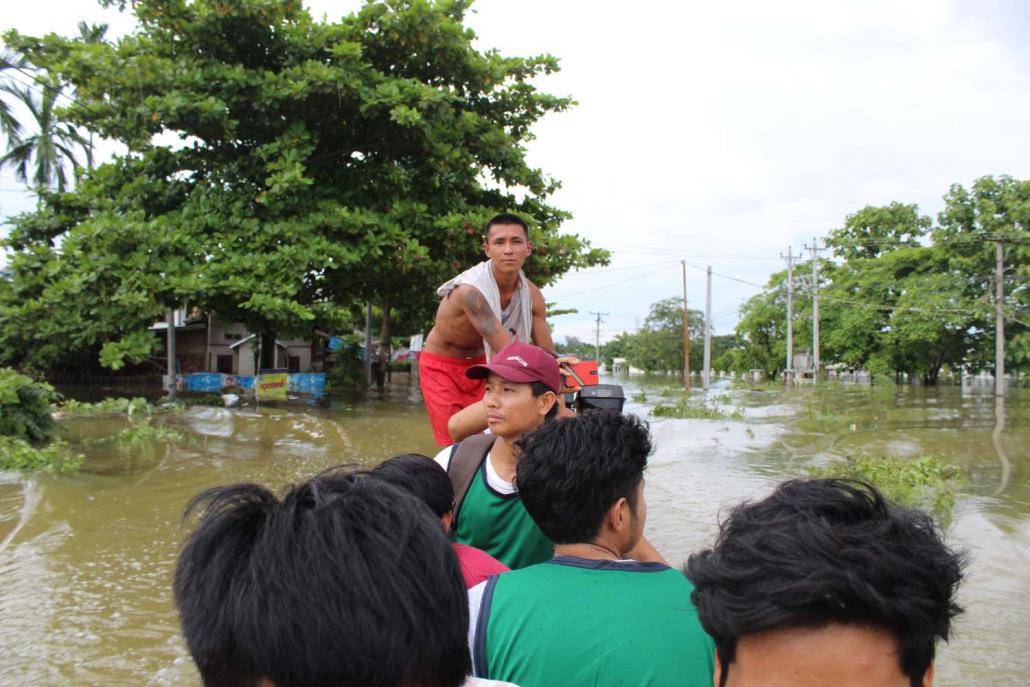 On reaching dry land, they ventured out on foot to more flooded areas where water eventually reached their chests. In some areas they travelled by inflatable raft to isolated houses, where there was not yet any organised assistance.

While many families had boarded up and left their homes, some had merely moved to the upper floors. Frontier saw a few people traveling by rafts fashioned from bamboo and empty jerry cans.

When asked whether she had enough food, one woman in Gyet Poung Chan ward said from her second-floor window, “A neighbour brings me some rice and curry once a day.”

By midday on Sunday, the floods had significantly receded.

Near Manau Park, tables were full at Café 60, which had been boarded up the day before due to a flooded kitchen. At the doorway to nearby 74 Cafe & Laundry, the last remnant of the prior day’s ankle-deep water was a small, stranded fish.