The latest World Bank ease of doing business report ranked Myanmar near the bottom of 190 global economies and this story will help you to understand why.

IT’S FAIRLY easy to register a trading business in Myanmar. But getting permission to import or export products through Yangon’s port is another matter entirely – let alone physically getting goods into and out of the country.

Despite some reform steps, the process remains complicated, slow and costly. The latest World Bank Doing Business report for Myanmar ranked the country 163rd of 190 surveyed for trading across borders.

The numbers in the report are staggering: the World Bank says it takes 230 hours to complete border compliance when importing goods, including obtaining, preparing and submitting documents during port or border handling, customs clearance and inspection procedures, compared to an average of 70.5 hours for East Asia and the Pacific, and 8.7 hours for high-income countries. The cost is also higher, at US$457 compared to $431 for the region and just $111.6 for high-income countries.

This expense, both in time and money, is borne by businesses and consumers once the imported items finally make it through the port.

But a big complaint from many agents is that officials fail to follow rules and regulations, instead demanding under-the-table payments to process documents. Frontier interviewed seven agents for this article; all said that such payments were mandatory and institutionalised. 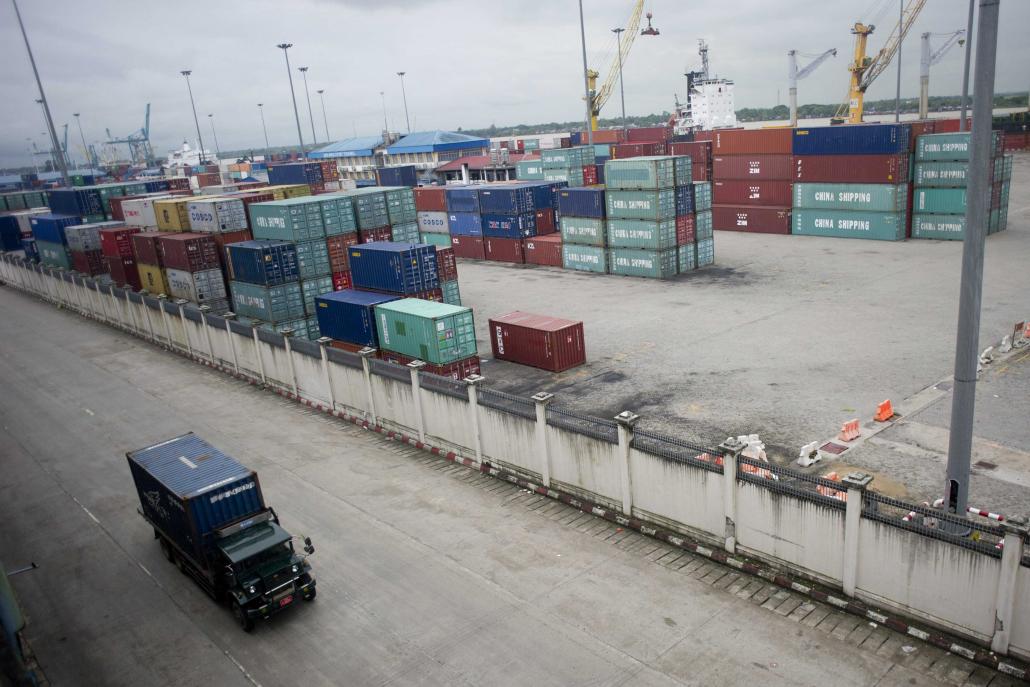 A truck drives past a cargo container yard at a port in downtown Yangon. (AFP)

“We had all hoped that the process would be smoother under the new government,” an agent said. “But it’s still the same and we all have to ‘negotiate’ with the government departments; it’s not about following the rules and regulations.”

Another agent said that there was actually little actual negotiation in terms of the size of under-the-table payments to government officials. Completing all procedures for a single import permit was nearly always around K150,000, because the informal fees are well known and rarely change.

Myanmar is not unique in having corruption at its port: Mr Troels Vester, the head of the United Nations Office on Drugs and Crime in Myanmar, said border crossings were a hotspot for corruption and crime in most countries, “whether it’s land border, airports or seaports”.

The Customs Department initially agreed to an interview but later refused to comment for this article.

The first big challenge for prospective importer and exporters is obtaining a licence from the Ministry of Commerce. The licence pertains to the import or export of a particular item; a separate licence is needed for each item, and for each time a particular item is imported or exported. Once the item enters or exits the country, the licence that was used expires.

Most companies rely on agents to handle the paperwork. The documents are complicated and agents say they often have a better understanding of what’s required than ministry officials.

“They [officials] don’t know how to make the process easy. When we face delays in licence applications, we often have to explain the laws and regulations to them,” said a Yangon-based freight forwarder and agent who asked not to be named.

Trading companies say that acquiring an import licence from the ministry depends on the experience, negotiating skills and contacts of agents. A mistake with the paperwork can result in a delay of up to six months in issuing a licence, they say.

An unwritten but essential pre-condition is that import licence applicants must be members of the Union of Myanmar Federation of Chambers of Commerce and Industry or one of its affiliated bodies. For example, if you want to export rice, you need to be a member of the Myanmar Rice Federation; for beans, it’s the Myanmar Pulses, Beans and Sesame Seeds Merchants Association. Membership typically costs K200,000 a year.

This requirement is informal; the import and export regulations make no mention of membership with the UFMCCI being a condition for obtaining an import licence.

“The federation is very powerful, more powerful than the ministry. They control everything involving importers and exporters,” said an agent with more than 20 years’ experience, who requested anonymity.

But UMFCCI vice chairman Dr Maung Maung Lay said membership was not a requirement for importers. “This is because exporters have to show the country of origin of their goods,” he said, adding that country of origin certificates are issued by the relevant associations. “If they are not a member, it will be difficult to get the certificate.”

After a trader has a licence and a letter of recommendation they can trade, but there’s one more hurdle to deal with. And it’s a complicated one, too.

After the trader’s consignment has arrived they have to face the Myanmar Customs Department and present the licence, the letter of recommendation, the shipping documents and other, less important documents.

The last step with Customs is the worst, say traders. It’s the valuation process. Although Customs’ motto is “Honesty is the best policy”, traders say some officials in the valuation section are notorious and have considerable authority, traders say. 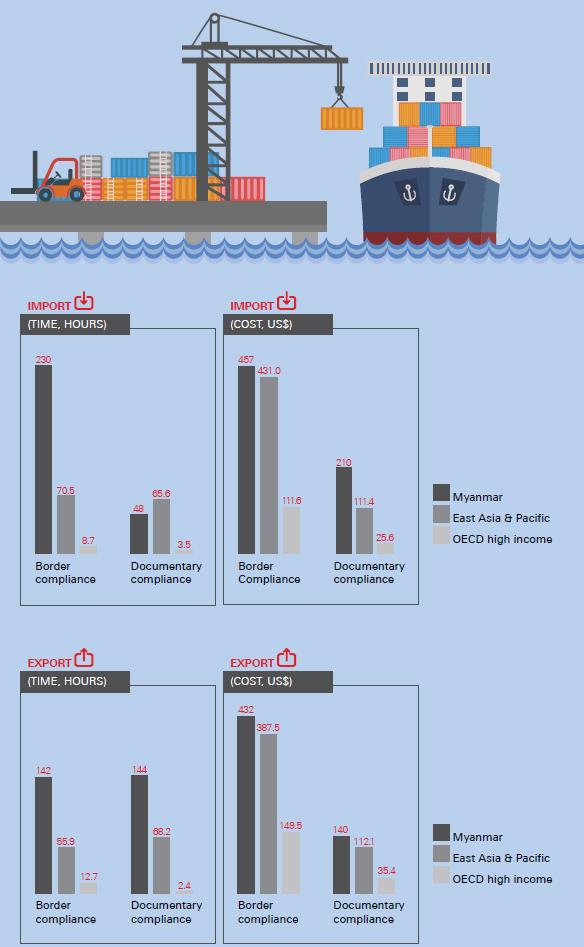 Myanmar compared with the region on import and export turnaround time. (Frontier)

“Two valuations are being used within the same ministry; it’s ridiculous,” one agent said.

It can get worse. If Customs officials dispute a valuation they can delay clearing a consignment, a situation that leaves agents with no alternative but to “negotiate” with them – that is, pay a bribe in order for the goods to be released.

After a consignment is approved by the Customs Department the next step for importers is the clearance process, when the goods are physically taken out of the port. This typically takes two weeks but is often subject to delays, due to both excessive paperwork and the physical checks of containers.

Vester from the UNODC said Customs was opening far too many containers for manual inspection, possibly to meet targets set by Nay Pyi Taw. “For the moment too many containers are being opened for no reason or very little solid reason, and it slows down trade and opens up corruption issues as well,” he said.

UNODC has begun working with customs to profile “high-risk” containers coming through the ports in Yangon so that Customs can decide which ones should be inspected.

“We calculate that very few percent of containers actually need to get opened – you just need to open the right ones to make sure the containers are moving and you can become competitive,” he said.

“This is very important because it’s a business area that companies are very worried about.”

Agents say the Myanmar Automated Cargo Clearance System, launched a year ago, is an improvement but still needs to be operated manually.

The US$40 million system, funded by Japan, was launched on November 12 last year at 14 locations throughout Yangon to improve efficiency at clearing cargos. But getting MACCS up and running properly is taking time. 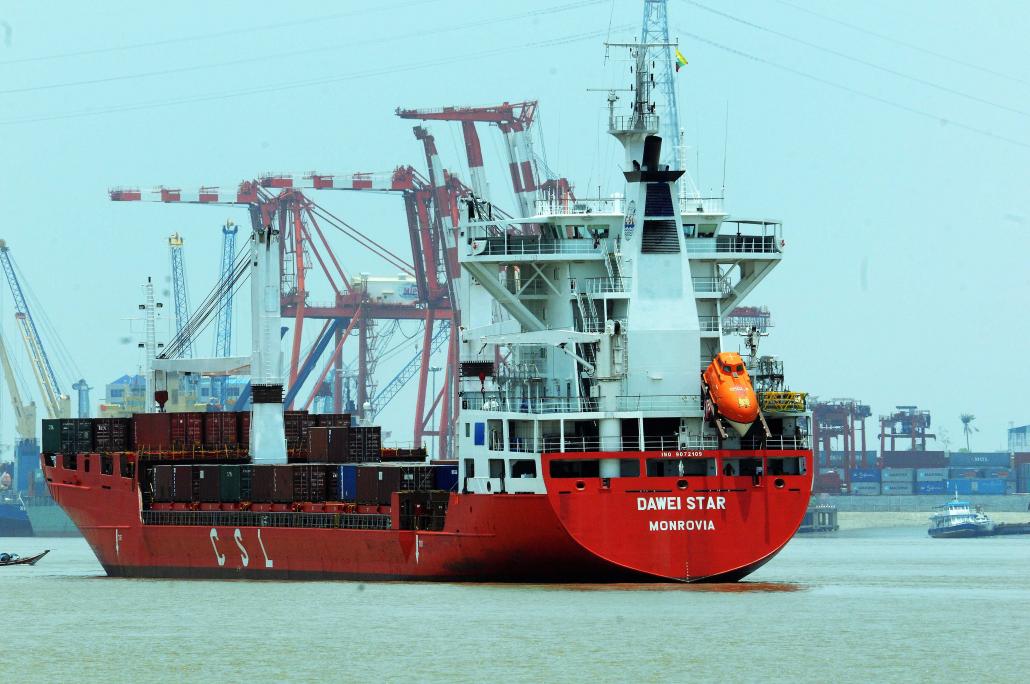 Yangon’s ports handle around 80 percent of all imports and exports. (Steve Tickner | Frontier)

Customs Department deputy director general U San Lwin acknowledged in December 2016 that there had been teething problems, including a lack of familiarity with the system’s software.

But freight forwarders said that a bigger issue was that some agents – particularly those representing small companies – and Customs officials are reluctant to shift to the new system because it is harder to circumvent the rules. Larger companies have mostly welcomed the system.

“Some agents are paying money to Customs officials so they don’t use the MACCS,” said one agent.

Another said that MACCS was a massive change for a system built on paperwork and negotiation. “The processes have not followed rules and regulations like under a digital system – just the considerations and decisions of humans,” said a freight forwarder with 25 years’ experience.

It’s a frustrating situation for those who had been hoping for greater efficiency.

“Many people say they don’t like MACCS but the reason is because they can no longer just do what they want,” the agent said. “You can’t negotiate with a computer. People who are corrupt don’t like MACCS.”

TOP PHOTO: A cargo vessel is unloaded at a port on the Yangon River in December 2016. (Theint Mon Soe aka J | Frontier)