Wa Lone and Kyaw Soe Oo, who work for the Reuters news agency, were both sentenced by a Yangon court on September 3 to seven years in jail under the Official Secrets Act for possessing confidential government documents.

At the time of their arrest, on December 12 last year, the two were investigating an army-led massacre of ten Rohingya Muslim men and boys in Inn Din village of northern Rakhine State, which the military has since admitted to.

The frequently shambolic trial, in which one police witness testified that their arrest was a set-up ordered by a senior police commander, and the verdict, have prompted worldwide outrage and concern about deteriorating press freedom in Myanmar. 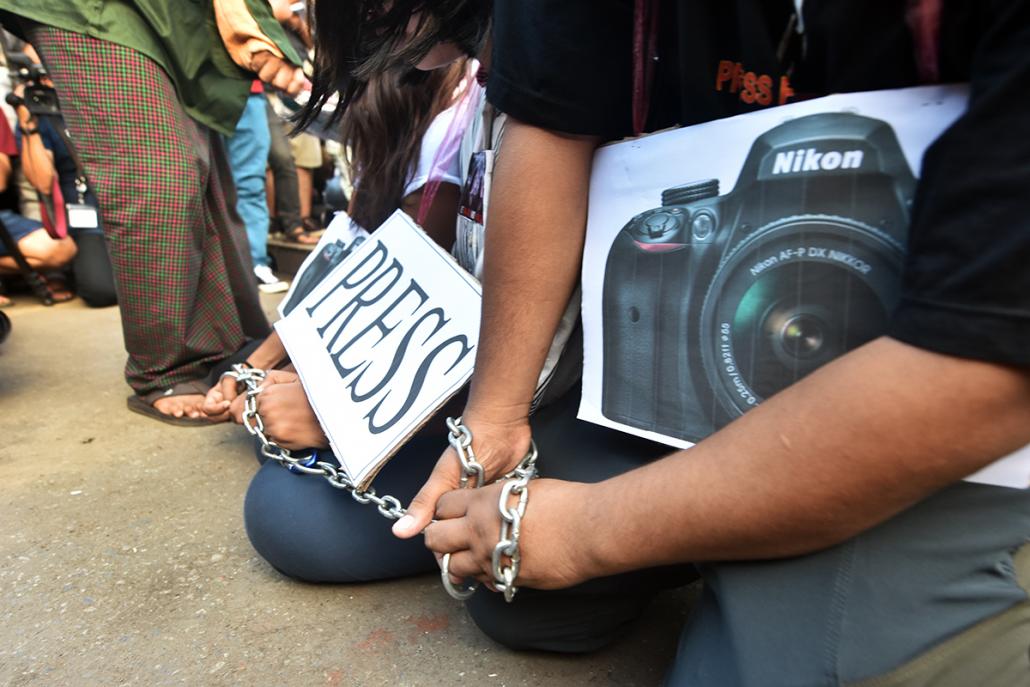 The legal team hired by Reuters intends to file an appeal at the Yangon Region High Court but demands are growing for Myanmar President U Win Myint to free the journalists in a pardon or amnesty.

The demonstration on Sunday followed a tense few days of negotiations between local authorities and the organisers, who belong to civic groups including the Protection Committee for Myanmar Journalists, free speech advocacy organisation Athan, and youth activist collective Generation Wave.

After protest notifications were sent to several central Yangon townships, the organisers received prohibition orders and were summoned to a meeting by the Bahan Township administrator. There, they were warned that they faced arrest if they proceeded, because they would be violating a regional government ordinance issued late last year that banned demonstrations in 11 central Yangon townships.

The organisers challenged this prohibition, citing a pro-military rally that was allowed to go ahead the previous week in front of City Hall, and wrote a letter appealing to Yangon Region Chief Minister U Phyo Min Thein, Ko Thar Lon Zaung Htet of the PCMJ told Frontier. 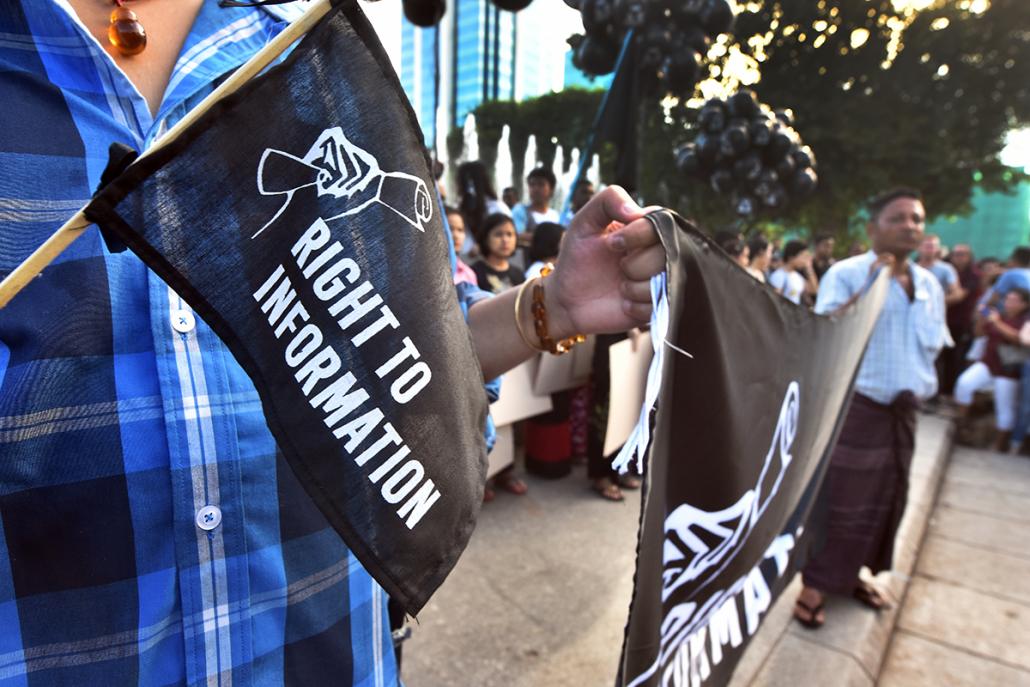 The district officials, drawn from the military-controlled General Administration Department and other government line ministries, said they could proceed with the third option, and that the police would provide protection during the protest.

Thar Lon Zaung Htet said they had received threats beforehand from pro-military nationalist groups and individuals, who consider Wa Lone and Kyaw Soe Oo “traitors”, but the rally went ahead peacefully, without any attempts at disruption.

Though the organisers had to negotiate on site with police officers about the precise location protestors would occupy – and were made to promise they would disperse within the hour – the police presence was light and unobtrusive.

The rally began at 4:15pm with chants of “the public’s right to information is our cause” and “release Wa Lone and Kyaw Soe Oo immediately”. One sign held by protestors read “a massacre is not a state secret”, referencing the Inn Din massacre the journalists uncovered. Others read, “publishing correct news is not a crime” and “if press freedom is shut down, democracy fails”. 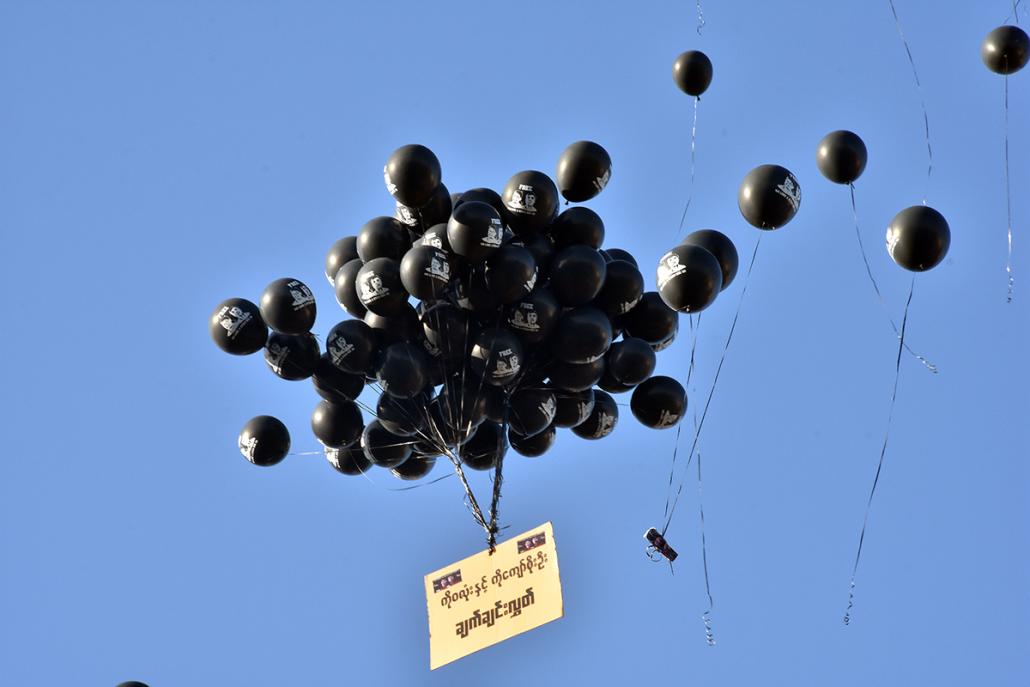 Black balloons stencilled with the faces of the two journalists were released into the air. (Steve Tickner | Frontier)

Protestors held black balloons stencilled with the faces of the two journalists and released the balloons into the air at the end of the rally, which lasted about half an hour.

Generation Wave member Ma Ei Ei Moe, who helped organise the rally, told Frontier, “I believe that jailing two journalists and blocking the public’s right to information is a violation of human rights”.

She said that activists and journalists demanding the rights to information and free expression faced dangers from vigilante nationalist groups, as well as the government: “I am afraid of being beaten by people who can’t be identified,” she said.

The demonstration included a short performance in which Maung Saungkha, who leads Athan, put on a beige National League for Democracy jacket followed by a green army jacket, and then beat journalists covering the event with a rolled up copy of state-run newspaper Kyemon. 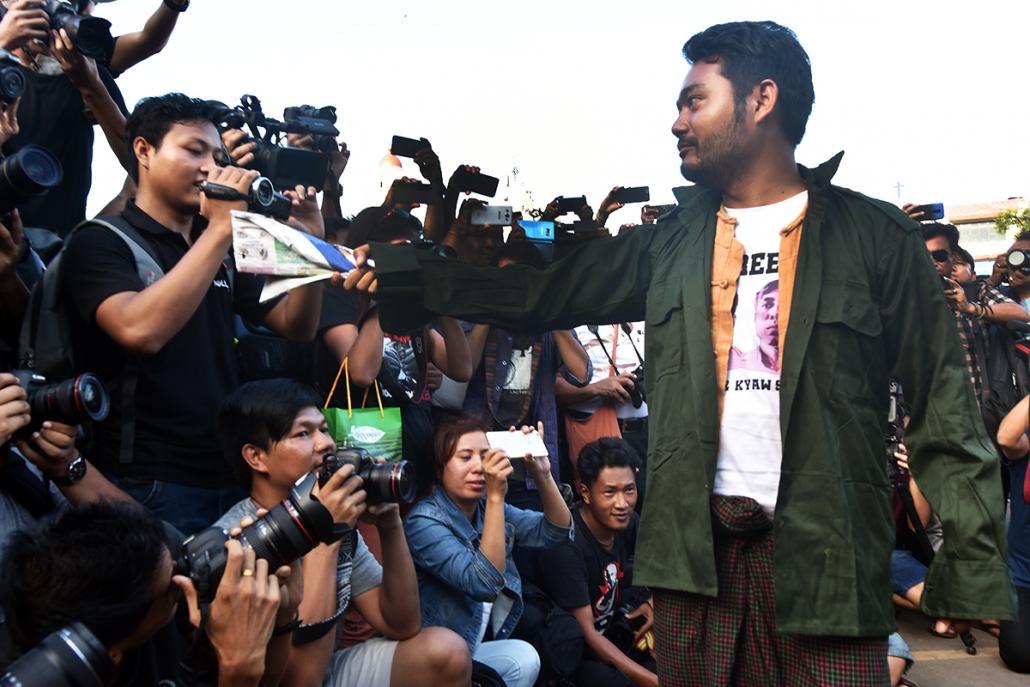 Ei Ei Moe gave one of several speeches at the protest, saying, “Till now, the people in this country have not had the right to information.” She said the jailing of journalists amounts to “blocking the eyes and blinding the ears of the public”.

In the days after the verdict against Wa Lone and Kyaw Soe Oo, 83 civil society groups, many of them Yangon-based, signed an open letter condemning their sentencing. However, fewer than 40 people turned up to take part in the protest, representing only a handful of groups. Most appeared younger than 30.

Asked about this underwhelming turnout, interfaith activist Ko Thet Swe Win, who took part in the protest, told Frontier that many sympathetic people were afraid to attend. He said this was an enduring problem in Myanmar civil society: that “we don’t participate when we really have to. An online petition is good and easy, but getting people to come out [in person] is a challenge.” 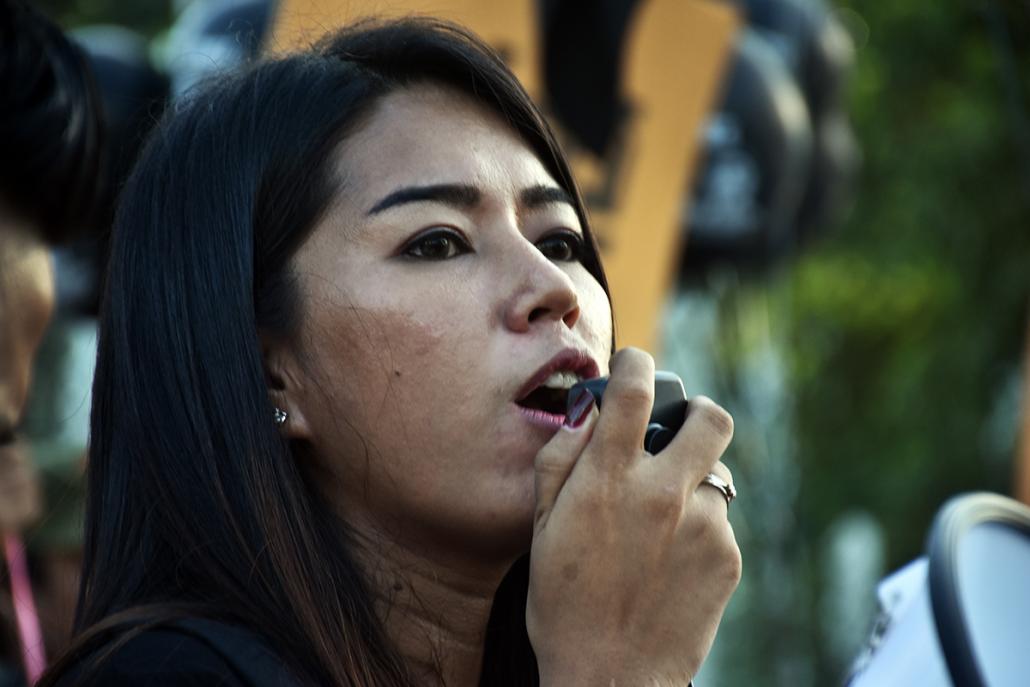 Participant Ko Aung Zaw, a student at the Yangon School of Political Science, told Frontier that Wa Lone and Kyaw Soe Oo “revealed the truth about the killings in Rakhine. We would not have been able to know it without their efforts.”

Thar Lon Zaung Htet told Frontier, “The people should have the right to know what’s happening in their country.”

Asked about State Counsellor Daw Aung San Suu Kyi’s comments on Thursday at the World Economic Forum on ASEAN in Hanoi, in which she said the jailing of Wa Lone and Kyaw Soe Oo “had nothing to do with freedom of expression at all”, Thar Lon Zaung Htet said, “The Lady doesn’t really know what’s going on in this case.”

He said, “Maybe she only reads reports prepared by the Ministry of Home Affairs,” a military-controlled ministry. “It’s a pity for her. That’s why we’re trying to send her a message. She should do something for them.”