Yangon University has some nice little earners, including a lucrative tender for a monopoly of all graduation photos, but evidence of the income is hard to find.

THE NOTICE on a tree carried a stern warning. “No professional cameras allowed. If detected they will be confiscated and a fine of K100,000 will be imposed.” The authority to levy the fine was unclear. The tree is in the campus of Yangon University, where “cash cows” are thriving.

There is no longer mention of a K100,000 fine, but the notice still warns about cameras being confiscated.

The sign is there because of a contract between Yangon University and Theingi Shwe Yi Co Ltd. 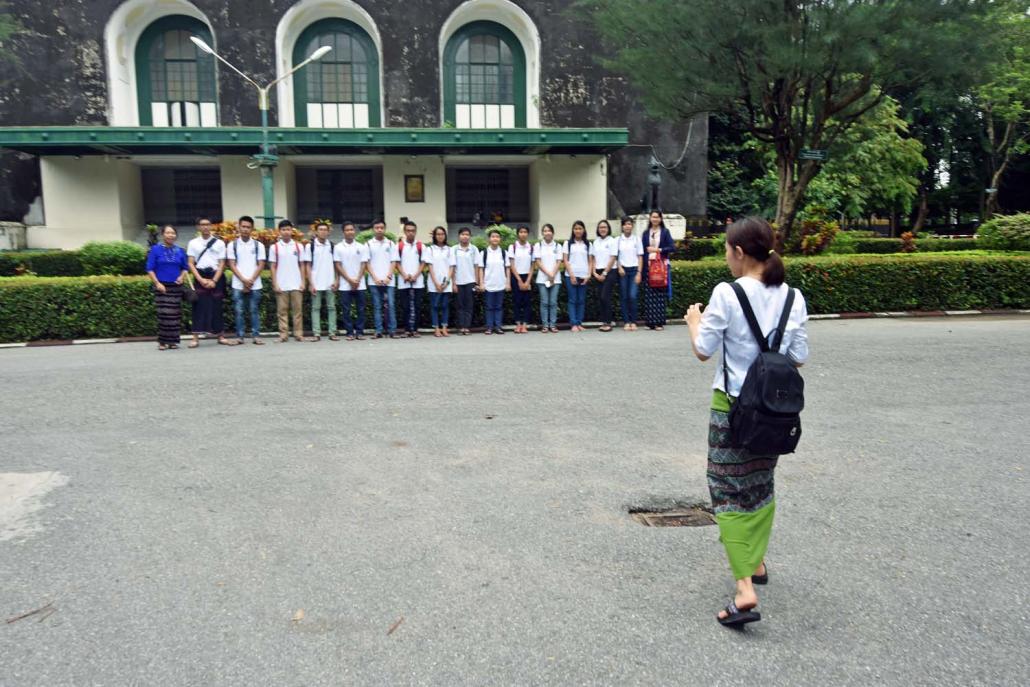 Students pose for a photo in front of the Convocation Hall at Yangon University. The university forbids the use of professional cameras on the campus. (Steve Tickner | Frontier)

Pho Kaung said that if professional photographers were allowed on campus, the “university would turn into a park” and students would be “disturbed” by their presence.

But it might have something to do with the fact Theingi Shwe Yi is earning rich rewards from its contract, which also covers gown hire.

Most also take up the optional extra of a set of 100 photos taken around the campus, which costs an extra K15,000.

The quality of the images can vary. Ma Hnin Sandar, who attended the University of East Yangon and participated in a graduation ceremony at Yangon University in 2016-17, said the image of her on stage was “terrible” and made her look like “a ghost”.

“It’s not worth hanging on the wall at home,” said Hnin Sandar, whose dissatisfaction over poor quality images and bad retouching was shared by many students.

After graduation ceremonies, many students travel to commercial photography studios to have another set of images taken.

Ko Nay Aung, who graduated in 2016-17 from the Yangon University of Economics, said he learned from the experience of his older brother, who had been disappointed with photos from Theingi Shwe Yi. When Nay Aung graduated, he brought along a friend who was a professional photographer to take his photos with a small camera.

“The difference is incomparable,” he said. “Even some amateur photographers can take better photos than them [Theingi Shwe Yi].”

Theingi Shwe Yi has held the annual contract for 23 years, since it took over from (Paungde) U Maung Maung Hnyut in 1995. He began his career in 1975, taking photos at Yangon University for the company that then held the contract. 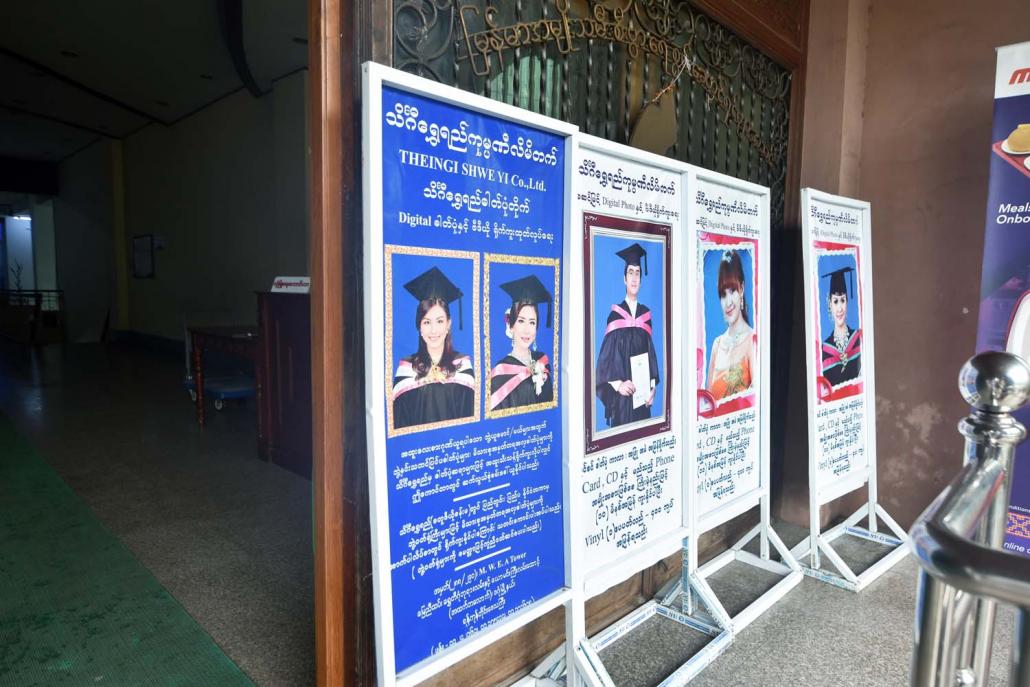 Theingi Shwe Yi advertises its services to university graduates. The company has held an annual contract for graduation photos at Yangon University since the mid-1990s. (Steve Tickner | Frontier)

“When we were taking photographs at Yangon University, the students could choose how many photos they wanted to pay for, but it’s not like that any more,” Maung Maung Hnyut, 76, said, referring to Theingi Shwe Yi’s policy of charging K15,000 for 100 photos.

“I didn’t like the contract [terms and conditions], that’s why I didn’t want to do it anymore.”

Theingi Shwe Yi has been granted the exclusive tender since 1995 but information about it is scarce. Yangon University says every tender invitation is published in state-run newspapers, but would provide no further information, making it difficult to determine how much the university earns from the contract and whether there is any competition from other bidders.

The rector, Pho Kaung, initially agreed to show Frontier documents related to the tender, including the rules and the bids received.

But Daw Nyunt Nyunt Yee, the assistant registrar at Yangon University who is responsible for the photography tender, then declined to provide the documents, or say how much TGSY bid to secure the contract this financial year. Personnel in other departments, such Training Affairs and Finance and Administration, also declined to discuss the tender.

Frontier phoned the owner of Theingi Shwe Yi, Daw May Than Nwe, several times but she declined to comment.

When Frontier visited the company’s studio on the corner of Shwedagon Pagoda and Nawaday roads in Dagon Township to request an interview, a staff member said May Than Nwe was in the office.

After a few minutes, a staff member came out of her office and said, “She said that she’s not in the office – that’s all.”

The tender for graduation photos is not the only such revenue earner for Yangon University; it also calls tenders to operate food stalls at its main campus in Kamaryut Township and at its Hlaing campus.

At Yangon University tenders are called to operate 43 stalls, which are about 3.04 metres (10 feet) wide and 6.09m (20 feet) long. Each is tendered separately through a silent auction. At the main campus the winning bids range from K210,000 to K1.25 million a month. That’s about twice the cost of Hlaing campus, where 16 food stalls have been opened, and tender prices range from K60,000 to K600,000. 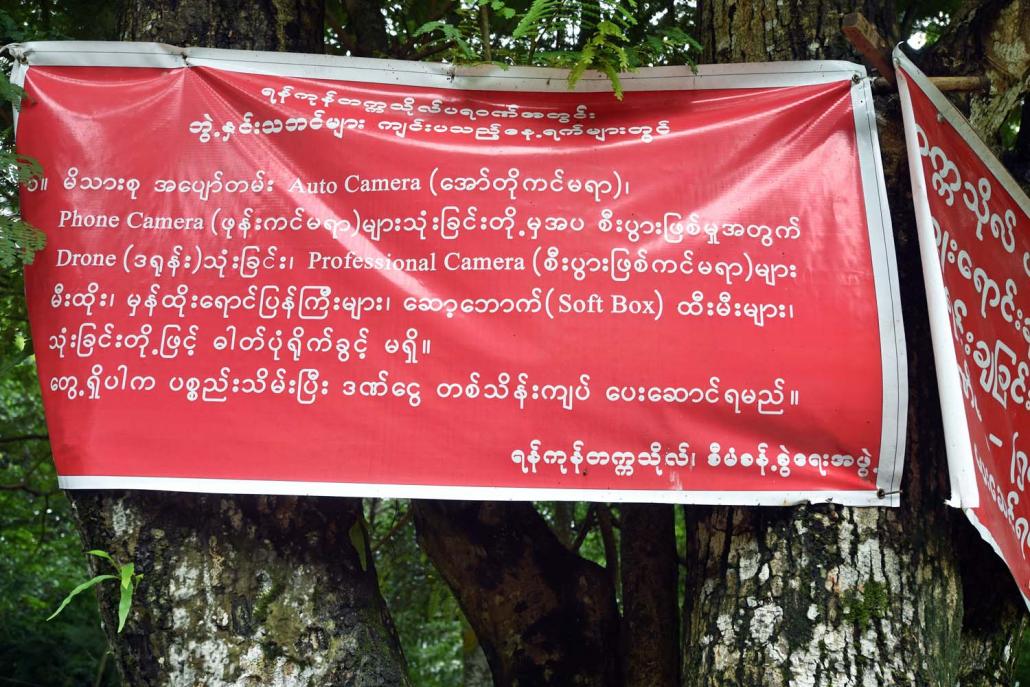 A sign at Yangon University forbids the use of professional cameras and warns they are liable to be confiscated. (Steve Tickner | Frontier)

The bids are submitted in sealed envelopes and then opened in front of all the bidders. “It’s like a lucky draw,” said a stall owner who requested anonymity.

While this appears transparent, several sources said they believed those close to university officials could find out rival bids and then submit a higher offer.

Daw Swe Swe Aung, who heads the Administration and Finance Department, insisted there was nothing untoward about the system, saying it was fair and transparent.

Tender rules require individual bids from NRC holders for each stall, but campus sources say it’s well known that, sometimes, up to three stalls are operated by the same person.

“It’s possible that members of the same family submit separate bids and then combine stalls into one establishment later,” Swe Swe Aung said.

If their bid is successful, stall operators are also required to pay the university an additional one month’s rent if their tender is successful. This is supposed to cover a land tax to Yangon City Development Committee, but it is unclear under which law or regulation such a tax is levided.

Swe Swe Aung said that at the end of the year some of the money is refunded if it is less than the YCDC land tax.

Asked about receipts and refunds, one stall operator, who also requested anonymity, said: “We have never heard of receipts or refunds”.

Swe Swe Aung said all the income from the tenders is being saved at state-owned banks, in what’s known as a Ministry and Department (MD) Account. 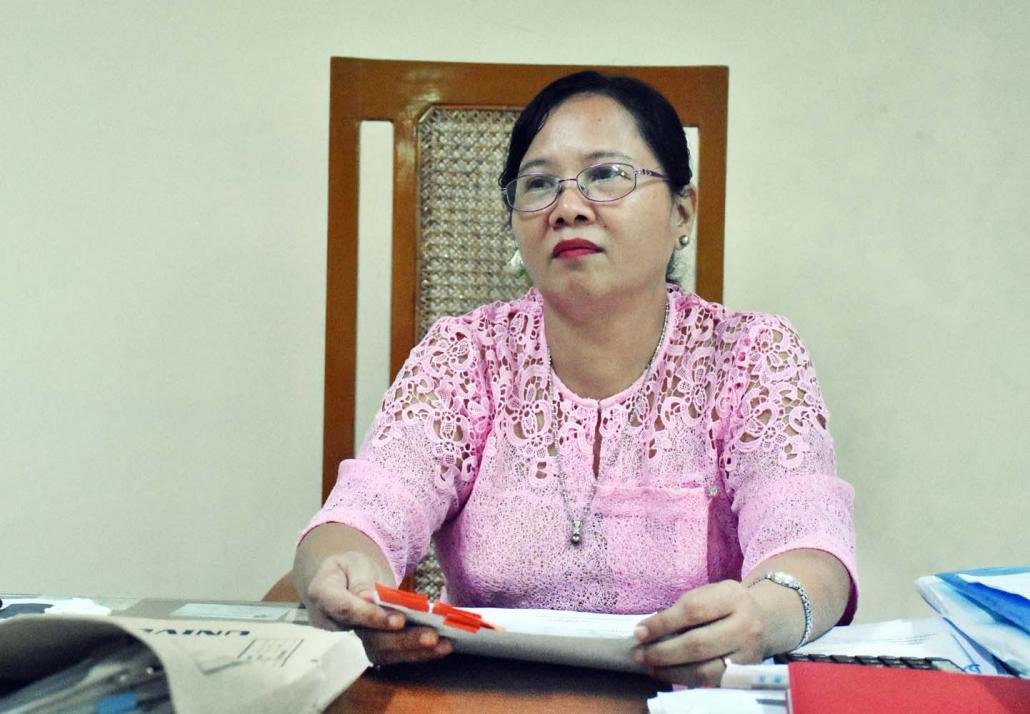 Frontier asked how much the university receives each year from tender income, but officials refused to provide any information.

Lawmakers are similarly in the dark. U Aung Min (NLD, Zalon), deputy chair of the Pyithu Hluttaw Public Accounts Committee, said that ministries provide information about income and expenses to the parliament each year as part of the budget process but for the Ministry of Education, the figures are never disaggregated to show the sources of income. He said no lawmakers have made a specific request for a breakdown of the income figures.

“I am sure that nobody except the Department of Higher Education has the accounts and would know about the income and expenses of the universities,” he said.

Universities are audited by state and region-level auditor general’s office. The Yangon Region office refused to provide any information or comment on audits of income from universities. Several sources in different states and regions said these audits are simple and typically involve checking receipts against expenses, and making sure figures add up.

Pyithu Hluttaw MP Dr Hla Moe (NLD, Aung Myay Thar Zan) said universities had several other sources of income, such as selling documents to students. “When we ask to see the ministry’s budget figures, we’re never shown the income from university tenders,” he said. “Universities are not places where people should be doing business.”

Research website Ananda Data makes a significant amount of government information public in order to promote the use of data in public discussions.

Founder Ko Htin Kyaw Aye said he was also confused by the lack of records for tender income within the Ministry of Education. “I have checked auditors’ reports going back two or three years and there are no records [of tender income],” he said.

He suggested the universities might have additional bank accounts that were not disclosed to the auditors. “If so, it’s not clear who might be controlling them.”