Yangon in pictures, then and now

A British resident of Yangon has created a website that highlights the dramatic changes development has brought to the former capital since the turn of the 20th century.

IN The Silken East, a two-volume account of his life and travels in colonial-era Burma, Vincent Clarence Scott O’Connor marvelled at the “absolute transformation” of Rangoon at the start of the 20th century.

“Every time that I come back to Rangoon I walk out to look at the new town, the new houses, the new metalled roads, running between the unoccupied spaces of newly reclaimed land. Thinking of Rangoon I feel that the interest of it lies much more in the future than in the present or the past,” he wrote in the book, published in 1904.

More than 100 years later, a similar observation could be made of Yangon. The commercial capital has changed dramatically in recent years, particularly as a result of the economic and political reforms begun in 2011.

Construction sites are everywhere. New high-rise buildings dot the city skyline, and old ones have tumbled down. Public spaces have opened, some have been smartly upgraded, and others have disappeared. The city is changing quickly, often at a blink-and-you’ll-miss-it speed, and it can be difficult to keep up.

A desire to record the changing face of the former capital motivated a British resident, Mr Will Low, to establish a website called Yangon Time Machine. It shows images of the city taken about 100 years ago and compares them with recent shots of the same location taken by Low.

“It’s my own sort of ‘thank you’ to the city,” said Low, who has lived in Yangon off and on for five years and plans to leave soon. “A lot of the conversations I’ve had with people have come back to how much this city has changed, and I really wanted to document that,” he told Frontier.

Since its launch in December, the project has documented more than a dozen sites around Yangon, and Low said he plans to post about 20 more updates before he leaves. He is keen to translate the project into Myanmar, and also sees potential for a mobile app.

Posts so far include a photo of the area near Sule Pagoda snapped in about 1900 and an image of the same spot taken in 2017, with scenes of the old town hall contrasted with City Hall, which was completed in 1936; the Rowe & Co department store, dating to 1910, and the building now as a branch of AYA Bank; and the resilient Immanuel Baptist Church, erected in 1885 and rebuilt in 1952 after being destroyed during World War II. 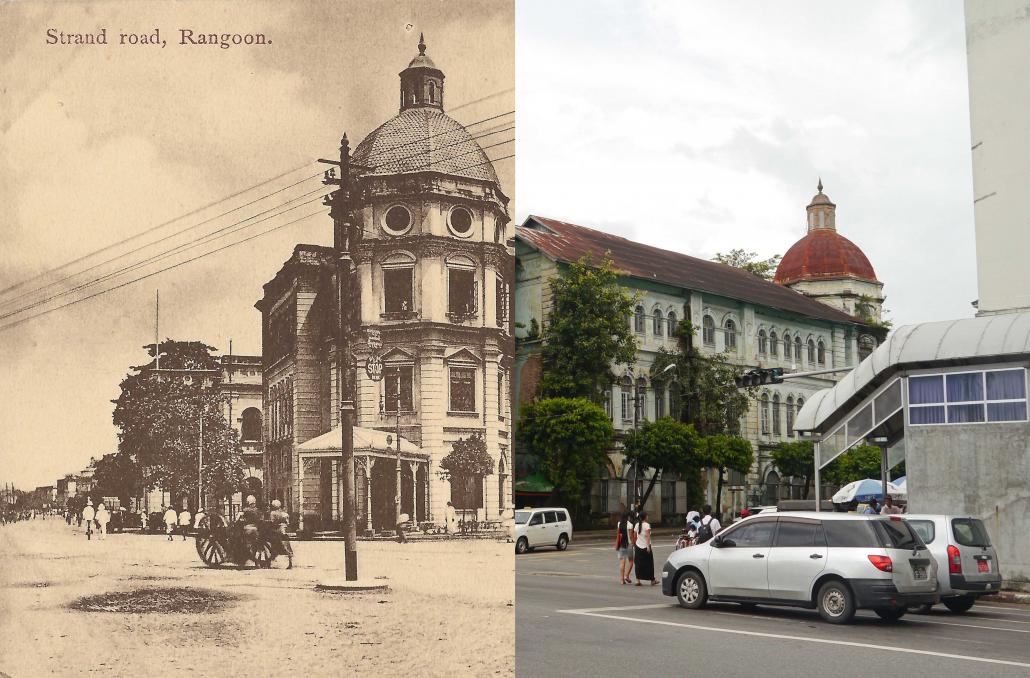 A blog post accompanying the photos describes a competition to design a new building to replace the old town hall, which had a collapsing roof and was infested with rats. The competition took place after World War I and reflected the rise of anti-colonial sentiment throughout the country at the time.

“U Ba Pe, a leading voice in the nationalist movement, called for the design to incorporate elements based on the pagodas and shrines of Bagan. The Europeans argued that it was inappropriate for civic buildings to use religious design elements due to the separation of state and religion. However, U Ba Pe smartly responded that there wasn’t a civic style of architecture in the world that wasn’t in some way descended from religious architectural design. With this, he won the debate,” said the post, written by Low.

Another post documents the history of Yangon’s Bogyoke Aung San Stadium, where the reader is introduced to the remarkable achievements of Suk Bahadur, a Gurkha from Kalaw who played in the national football team from 1952 to 1970, was the national 100-metre sprint champion and also excelled at tennis and field hockey. Suk Bahadur, who was a major in the Tatmadaw, played for Army FC before joining the national team.

The former Excelsior Theatre, now the Waziya Cinema and one of the few surviving venues from the golden age of the Burmese movie industry in the first half of the 20th century, is featured in another post. It includes text from the opening slide of one of Burma’s first movies: “Please accept our apologies for the poor quality of the film.”

Other posts feature the Shwedagon Pagoda, the city’s best-known landmark, as well as the High Court, Kandawgyi Lake and the Surti Sunni Jamah Mosque, on Shwebontha Street in downtown Yangon.

Asked to name his favourite turn of the 20th century image, Low did not hesitate.

“Sule Pagoda, with nothing around it. Compare that to today and it’s quite remarkable,” he said.

Low has praise for organisations such as Yangon Heritage Trust, which are striving to preserve and protect the city’s architectural treasures.

“But quite often it’s the smaller buildings that are at risk,” he said. “And it makes sense: Quite often for people living in those buildings, if you knock the old building down and replace it with a shiny one, their lives improve.”

As a result, he said, programmes such YHT’s Blue Plaques project can make an important contribution to preserving heritage buildings. The commemorative plaques, of which more than 20 have been installed throughout Yangon since 2014, aim to foster appreciation of the historical significance of buildings and other landmarks.

“For people to care about these buildings, they need to be incentivised,” Low said. “You can achieve that through things like tourism dollars, or you can talk about the history of a building and people can connect with it in that way.”

As most of his photos draw on the British colonial era, Low recognises that the period he is trying to document will not please everyone, and cited a recent conversation with a Myanmar friend.

“She said to me, ‘When you guys look at this time in history, it’s often something positive for you. But for a lot of people in this country, looking back at the past can be quite a negative experience’.”

Low insists he is not trying to wade into a debate about what heritage preservation should look like in his adopted city, but rather to document how much the city has changed.

“I love the idea of coming back here in 50 years or so and seeing how much this city has changed. And imagine it, having these photos of this city from three different periods of time.”

TOP PHOTO: A photo taken of Sule Pagoda at the start of the 20th century and a 2017 photo taken at the same spot. (Supplied)