Women’s groups in Kachin State say understaffed police with inadequate resources are hampering investigations into human trafficking and contributing to a crime wave in Myitkyina, in which women are often the targets.

SINCE THE conflict between the Tatmadaw and Kachin Independence Army resumed in 2011, bringing to an end a 17-year ceasefire, almost 100,000 people have been displaced.

The majority of those displaced live in camps close to Myitkyina, the state capital, and neighbouring Waingmaw. Women and children comprise more than half of the IDPs, and human traffickers are a constant menace, looking to take victims over the border into China.

A serious shortage of officers and resources is making it difficult for police to combat human trafficking. Women groups in Myitkyina say that the resources are so low that sometimes police have to borrow motorbikes from local people to conduct investigations.

“We have to let the police take our motorbikes and fill the fuel for them,” said Daw Nang Pu, founder of the Kachin State Women’s Network.

Nang Pu, who is also a director of the Htoi Gender and Development Foundation, said such situations had occurred when members of the public had reported suspected traffickers, as well as suspected rapists, to NGOs, who then sought assistance from the police.

Nang Pu also said that at many of the police stations in Kachin State, there were not enough police officers to conduct investigations.

It’s one of many challenges faced by people, especially girls and young women, living in the IDP camps in the northern state. Nang Pu said that, such are the poor conditions, women often become depressed living in the camps, and have little interest in finishing their studies.

Nang Pu said girls from the camps were being trafficked across the border to neighbouring China, where the former one-child policy has created a shortage of women and a lucrative market for wives.

She said some IDP camp leaders had also supported the marriages of girls who had received offers of money from Chinese men. The fate of the girls after they went to China was unknown, she said.

Nang Pu said there had been situations where NGOs had begun investigating trafficking cases and the victim’s parents had either been threatened by traffickers or paid to keep quiet. 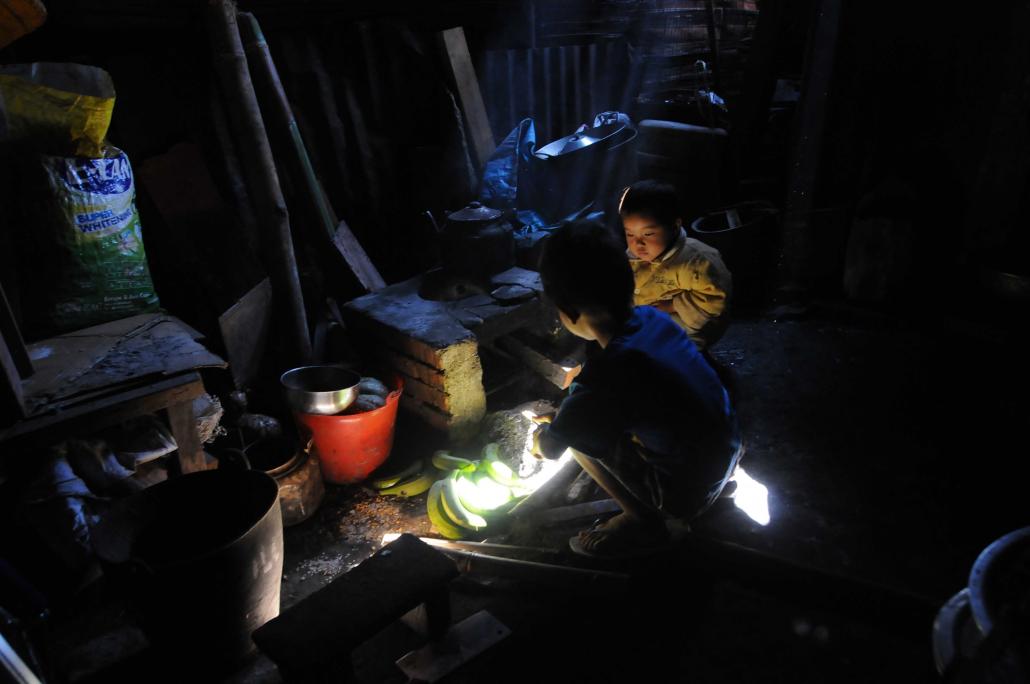 Human trafficking concerns are just one of the worries faced by IDPs in Kachin State. (Steve Tickner | Frontier)

“The police often hesitate to say yes in taking immediate action for a suspected case,” she said, with police sometimes saying that an incident took place too long ago for them to investigate.

“We tell them we can provide evidence and that it is their responsibility to investigate,” she said. “But they are always late to take action,” she added.

But the resources are available, she said. During a protest in January against the suspended Myitsone dam in Myitkyina, there had been plenty of police available, Nang Pu said.

“We don’t know where they came from,” she said.

Nang Pu said some Myitkyina residents suspected there might be collusion between some police and traffickers, though there was no evidence.

A total of 95 human trafficking cases have been filed at police stations across Kachin since 2011, 28 of which have happened this year, according to police figures.

U Min Khaing, superintendent of the anti-trafficking person division of the Myanmar Police Force in Nay Pyi Taw, told Frontier that 203 human trafficking had been opened across the country this year. Of those, 143 cases involved people being taken to China, 13 to Thailand and one to Malaysia. Forty six of the cases involved domestic trafficking.

Deputy Superintendent Thein Zaw, regional station commander in Myitkyina, said workers would not become victims of trafficking if there were more job opportunities in Kachin.

“Because our country cannot provide enough job opportunities for the people, they go there,” he said, referring to China, adding that many Myitkyina residents often seemed reluctant to collaborate with the police and report suspected trafficking cases.

“The root of the trafficking problem is caused by a combination of politics and war,” Nang Pu said.

As well as human trafficking, there is also concern in Myitkyina about crimes targeting women, with robberies and murder occurring in the downtown area, including during the day, Nang Pu said.

“Women are often the victims,” she said.

Ma Saung Win, project coordinator with the KSWN, said Myitkyina was not safe for women and many people did not leave their homes after dusk to avoid being victims of crime.

Saung Win said she had seen men snatching bags and jewellery from women while she was walking in the city.

She said a female friend was robbed by a man on a motorbike of a bag containing K3 million in cash and an iPad but when she reported the incident to the police, they dismissed her concern and said they could not investigate.

“So maybe people do not trust the police. That is the question we are asking ourselves after the incident,” said Saung Win.

Saung Win said the KSWN wanted to help make the community safe for women, but also faced concerns of their own.

“Although we want to help other women, we are also fearful ourselves,” she said.

She said that to ensure the safety in society, local authorities should use their knowledge of the population in each township to investigate cases thoroughly.

“I question I really want to ask, is why the local authorities do not follow up on cases. Even as CSOs we can do this,” she said.

Effective law enforcement so that criminals could not act with impunity was needed to address the law and order situation in Myitkyina, said Saung Win, who acknowledged that the fighting in Kachin had contributed to the problem.

TOP PHOTO: A mother rests with her child inside her home at an internally displaced persons camp in Waingmaw Township. (AFP)