With lax enforcement of COVID-19 rules, the beer keeps flowing in some Yangon bars

Although most restaurants, teashops and bars in Yangon have complied with a recent order to offer take-away service only in order to curb the spread of COVID-19, some have been able to flout the instruction because local officials are reluctant to enforce the rules.

THE NEON lights that normally adorn the front of the bar on a main road in Thingangyun Township are switched off, but inside it is mostly business as usual. Small groups of friends and a few couples come and go through the evening, and there are still a few people left in the early hours. At times there are more than 20 customers drinking in the relatively small space.

Sitting in this establishment, it would be easy to not realise that authorities in Yangon have ordered hospitality businesses to offer only take-away service to prevent the spread of COVID-19.

On March 28, township city development committees, which are under the Yangon City Development Committee, instructed restaurants, teashops and street stalls in Yangon to restrict food and drink sales to take-away only. Earlier, the Yangon Region government issued an order to all district offices of the General Administration Department instructing them to ensure all cinemas, karaoke venues, night clubs, massage parlours and video halls close immediately.

Similar measures have been taken in many townships across the country but, in the absence of an instruction from the Union government, they have been rolled out in piecemeal fashion. Officials in Mandalay on March 25 instructed restaurants, beer stations, teashops and KTVs in the city to only offer take-away service. In the northern Shan State capital Lashio, the township General Administration Department went further, ordering video screening halls, KTVs and bars to shut down entirely. The announcement said noncompliance would be punishable under section 188 of the Penal Code – disobeying a government order – which is punishable with a fine, a prison sentence of up to six months, or both.

These measures reflect Ministry of Health and Sports guidelines on social distancing, as well as the advice of the country’s leaders. “The most effective method of prevention and control is to avoid contact,” State Counsellor Daw Aung San Suu Kyi said in a nationally televised speech on March 31. “At this time, like in the saying ‘The farther, the better’, please take care and protect your health and the health of others. Stay at home as much as you can.” Bars in Sanchaung Township that are normally packed with customers every night of the week are now closed, but elsewhere in Yangon it’s a different story. (Nyein Su Wai Kyaw Soe | Frontier)

A walk around Yangon’s Sanchaung Township on a recent evening revealed that most businesses were complying with the order to only sell take-away, or had closed entirely. The beer stations and bars on Padonmar and Sanchaung roads – popular places like Win Star, 777 and Terminal 5, which are normally packed with customers every night of the week – were shuttered and silent. The entire area was eerily quiet. Only one bar had its doors open, and there were no customers inside.

In other areas of the city it’s a different story, however. Confusion over who is actually responsible for enforcing the municipal order restricting service to take-away only, questions over the legal authority to punish those who refuse to comply and a reluctance to confront businesses flouting the rules has allowed some, like the all-night bar in Thingangyun Township, to remain open for dine-in customers.

Unlike the GAD order on closing some businesses, the wording of the municipal instruction was ambiguous. Letters from township development committees in Yangon seen by Frontier say restaurants, teashops and food stalls are only “requested not to serve in the premises”, rather than forbidden, and give no details on potential punishments.

7Day News Daily reported on March 30 that the Yangon City Development Committee had initially wanted the regional government to shut all restaurants and food stalls. However, when the government did not enact such an order, YCDC instead introduced rules asking shops to only sell take-away, the paper quoted regional government director U Moe Hein as saying.

Asked whether there are legal consequences for businesses that don’t comply with the municipal instruction, officials from several townships gave differing responses.

“The township city development committee handles the legal aspects of instructions like this,” the secretary from the Mingalar Taung Nyunt GAD office said.

In North Okkalapa Township, GAD township administrator U Tint Zaw gave a similar response on enforcing the take-away order. “That’s YCDC’s job, not ours,” he said when asked why action was not being taken against businesses flaunting the restrictions. In response, however, one member of the North Okkalapa township development committee, which is under YCDC, said it was unable to enforce the order without the help of the township-level COVID-19 committee, of which Tint Zaw is the chairperson.

Kyaw Yin Myint said it was also unclear how action could be taken. “As far as I know, there are no punishments or fines for not following the instruction under the MCDC Law.”

In South Okkalapa, township development committee head U Kyaw Zay Yar Win gave a different response. Although there is “no specific YCDC law” under which the municipal authorities could take legal action against businesses, it could still find a way to punish them.

“When a restaurant registers for a business licence under YCDC, there is a list of things they agree to. Section 3 says that they have to follow the directives and orders of the township authorities,” he said. The punishments for ignoring instructions from a township development committee range from a fine to the revocation of a business license for a fixed period of time.

He said that legal action was not really necessary though, because most businesses were already complying.

“The township-level COVID-19 committee comprising GAD and YCDC officials as well as residents is handling the publicising of these instructions, as well as their enforcement,” he said.

“Most restaurants in South Okkalapa – I would say about 95 percent – are following the instruction. For the small proportion of businesses that are not following it, we don’t really need to think about fines or other legal action – we just go around and encourage them verbally to comply.” 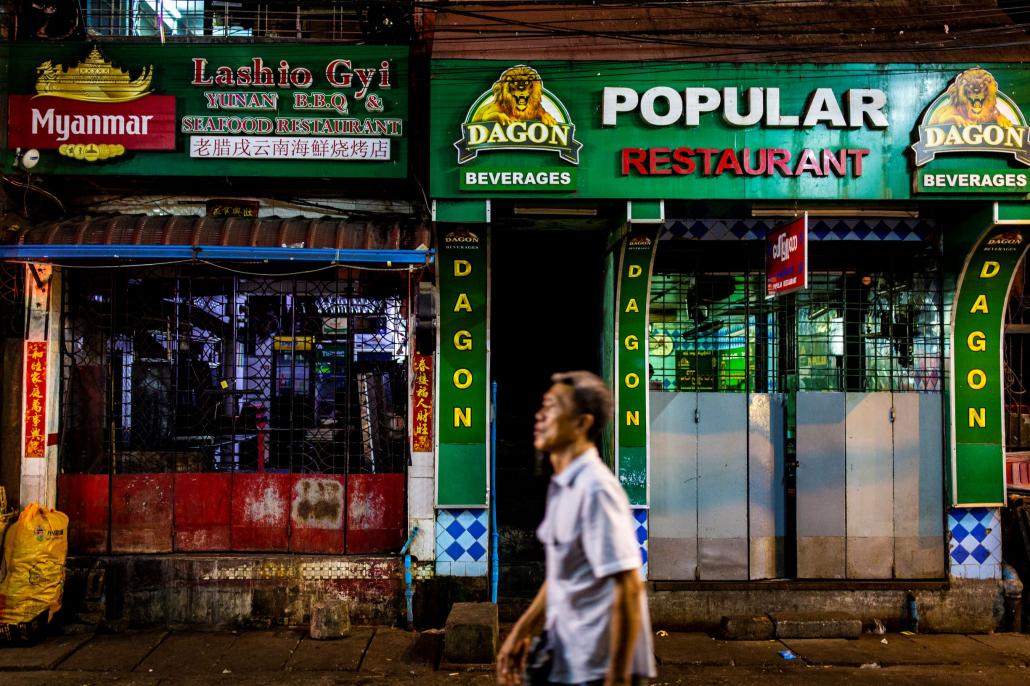 Chinatown’s 19th Street, a popular evening haunt for locals and tourists, is now desolate as most Yangon bars comply with new restrictions, despite the lack of enforcement. (Hkun Lat | Frontier)

But the refusal of some to heed the instruction is not just about ignoring the rules. For them, the financial hit of offering only take-away service is too great a burden to bear.

Teashops, restaurants and bars earn most of their income through dine-in services. “If I have to close suddenly, how am I going to pay rent and salaries for the coming months?” said the owner of one beer station and restaurant in North Okkalapa Township that remained open until the start of Thingyan on April 10.

Elsewhere in North Okkalapa Township, the Min Kyee Kyite teashop complied with the order to sell take-away only but has seen around 95 percent of its revenue disappear. Manager U Khin Maung Win said this was because even take-away sales were down on normal levels. “Typically dine-in services make up about 80 to 85pc of the income, and the take-away sales make up the rest,” he said. “But take-away sales now are just 5pc of what our total sales were in recent months.”

However, many elected to close their businesses even before the take-away order came out. “During this health crisis, businesspeople like me have two options: safety or money,” said Ko Johnathan Lim, who temporarily closed his Bahan Township bar, The Beer Factory Yangon, on March 23. “We have to look at the issue carefully and balance whether the amount of profit we gain is worth the risk in terms of public health and safety.”

The Myanmar Restaurant Association has been helping its members submit applications for soft loans from the Union government, which has set up a K100 billion fund to support businesses affected by COVID-19. The one-year loans will incur annual interest of 1 percent, and priority will be given to manufactures producing garments under the cut-make-pack system, hotels and tourism businesses and small and medium enterprises.

However, Johnathan Lim said he did not think the loan scheme would be that helpful for a hospitality business, particularly given uncertainty over when they’ll be able to reopen. “If we can’t reopen and generate revenue like before, there’s no way we’ll be able to repay the loan,” he said.

Back at the bar in Thingangyun, the beer continues to flow despite a soft lockdown in Yangon from April 10 to 19, during which time the regional government has advised people not to leave their homes except to buy food or receive medical care.

The manager of the bar, who asked not to be named, said he was aware of the instructions from the municipal body but no one had come and warned him to close.

“We still have to pay rent, which is about K4.5 million a month, and salaries for five or six staff,” he said. “We’ll just keep running for as long as we can.”