Win Htein: 'We are offering change'

In some ways, the political career of U Win Htein has come full circle. He joined the National League for Democracy when it was formed in 1988, spent two decades in jail after being arrested in 1989 for his role in the national uprising the previous year, was released in 2010 and was elected to parliament as the NLD’s MP for Meikthila in the 2012 by-elections. U Win Htein, 73, is retiring from national politics after the election in November, which many expect will give the NLD the largest number of seats in the Union parliament, if not an outright majority in both houses.

The veteran NLD member said he’s retiring as an MP for health reasons, but will remain as a senior patron of the party. “Every time I see a pretty girl, I worry about my health,” he said, with a mischievous chuckle that punctuated much of our interview at his home in Yangon’s Insein Township.

“There is more to be done,” U Win Htein said. “We have to establish a truly federal democratic state that we can share the fruits of our labour equally with the states and divisions. Then we can be proud,” he said.

“We are offering change. We have promised a government that will be corruption free, because for many years in government, the higher up they are, the more corrupt they become.” The NLD has asked its candidates to declare their assets to ensure transparency, U Win Htein said.

As well as eliminating corruption, he said the NLD also wants to achieve a genuine nationwide ceasefire agreement that, once signed, would mean that the Tatmadaw’s role in politics would gradually diminish.

“According to Senior General Min Aung Hlaing, if the peace situation becomes better, then the role of the army in the political future of the country will decrease gradually. That is our wish. Daw Aung San Suu Kyi has said she would like to see the army as a professional one and one that is respected and loved by the country. That is a huge test,” U Win Htein said.

Despite its enormous popularity, there are questions about the effectiveness of an NLD government. They arise because of its lack of administrative experience at the national level and the absence of an obvious alternative leader to Daw Aung San Suu Kyi, who is constitutionally ineligible for the presidency because her sons are British citizens.

“We have a plan in place. We have a Plan A, Plan B, Plan C,” said U Win Htein. Can he elaborate on the plans. “No. After the election,” he said, followed by that laugh again.

Some foreign investors have aired concern about the NLD’s credentials for economic management and what its strategies might be for encouraging growth in an economy that has barely begun to catch up with its neighbours.

“The main objective of our economic policy is about job creation,” said U Win Htein. “If you want to create jobs, then you have to ease the difficulties encountered by foreign companies. So we want to ease this process for job creation and also focus on SMEs [small and medium enterprises]. We also advise these companies coming in to establish their projects in areas like Shan State and Kachin State, so that the job creation is shared more equally across the country,” he said. 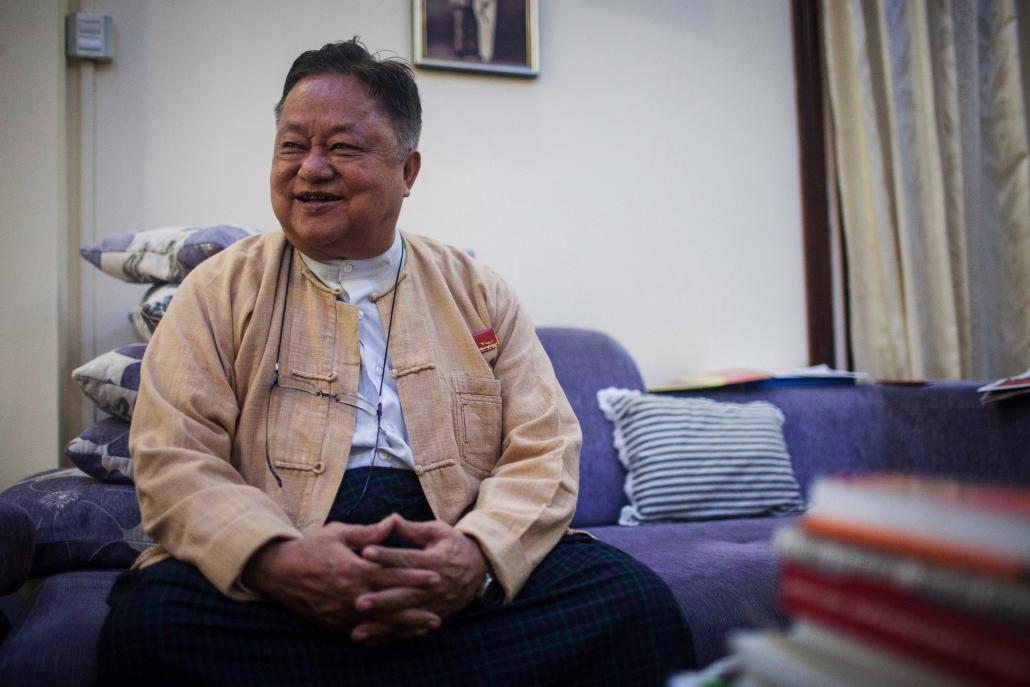 The NLD is poised to realise the hopes harboured by veteran members such as U Win Htein since it was formed in September 1988 but the party’s preparations for the November election have not been without controversy. There was fallout over the decision by its central election committee in August to reject candidates chosen at the township committee level.

“So we had nearly 4,000 candidates and could only choose just over 1,000,” he said. “We had to reject nearly 3,000 candidates. Some of them complained and argued the whole day, very noisy, but later they accepted our reasoning because from the very beginning we said that the decision by the central headquarters is final,” he said.

U Win Htein said party discipline and commitment were big factors in the rejections.

“In 2012 [the by-election], we had to leave some candidates behind because they did not go along with party discipline,” he said. “They should act according to the party line and they didn’t listen. So we have experience of this. So Ko Ko Gyi, yes he has a very big reputation and is well liked by the people, but he is not true NLD. It would cause a lot of disruption in our party. That is why we have to give priority to those who have worked for the NLD since the very beginning.”

He cited Daw Sandar Min, the NLD’s MP for Zabuthiri Township in Nay Pyi Taw, as an example of someone who had not previously been a party member but had aligned herself with its policies and was now playing an important role in decision-making.

U Win Htein played down recent criticism of the NLD by the ultra-nationalist monks’ group, the Committee for the Protection of Race and Religion, or Ma Ba Tha, when it accused the party of not working in the interests of the Bamar Buddhist majority.

“We do not see it as a challenge,” the NLD veteran said, adding that the party trusted the judgement of the people.

“For the time being, there will be some influence by some senior monks, but we do not see it as a long-term challenge,” he said.

Yet the party opted not to field any Muslim candidates in the election.

“Suppose we choose a Muslim candidate, it will be a good excuse for the Ma Ba Tha to accuse us of promoting and protecting the Muslim cause,” said U Win Htein. “Politically, it is not timely to select Muslim candidates and we have spoken to the prominent Muslim members of the NLD and they understand this,” he said.

“These people were killed in front of my eyes. This really hurt me to see this and that’s why I said I am ashamed of being from Meiktila, very angry,” he said, his voice fading.

His expression of shame led to accusations from some constituents that he was not interested in protecting the rights of Buddhists. There was an unsuccessful attempt to have him removed from parliament.

“This situation cannot be done quickly, we have to try to organise the leaders of each and every religion to discuss,” he said, referring to the need for dialogue to play a role in defusing religious tensions.

The NLD has been a political force for nearly 30 years, but its long-muffled voice has only been heard in parliament since 2012.

Asked if the party’s lack of parliamentary experience would be against the country’s best interests if it wins a landslide victory in November, U Win Htein dismissed the question as “silly”, before breaking into another laugh.

“Even if we win 100 percent, we will still only have 330 seats because the other seats are occupied by the army. Even that is not enough to change the constitution, so we must win as much as possible.”