Cockfighting is thriving in Myanmar but remains a clandestine activity because of prohibitions on betting.

FROM secret meetings in rural towns to flashy Facebook profiles and YouTube videos, the clandestine sport of cockfighting is alive and flourishing in Myanmar.

Although cockfighting is not technically outlawed in Myanmar, gambling is, and with the two activities so closely intertwined, cockfighting has become widely understood to be illegal.

“There are thousands of people in the cockfighting industry across the country,” said U Myat Thiha*, 50, from Yangon’s Mayangone Township, who has been involved in cockfighting for 40 years.

“I have been involved in every single role of cockfighting – as a fighter, first-aid provider, judge, breeder and trainer,” Myat Thiha said. “I love cockfighting. I love unpredictable games of head-to-head fighting.” 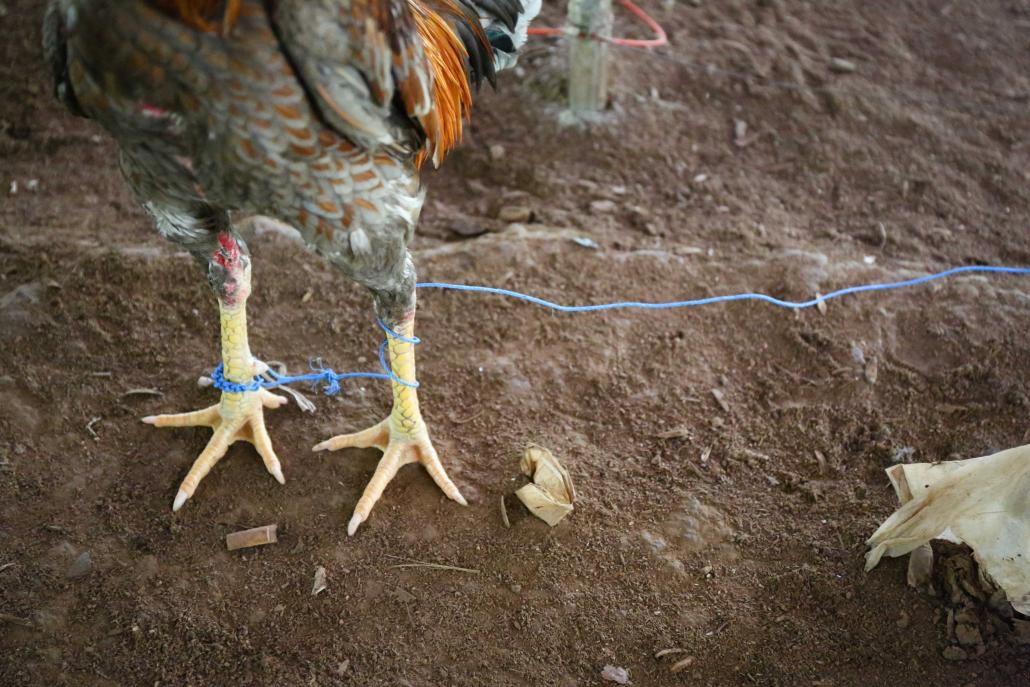 A cock is tied to a post, waiting to be weighed and matched for a fight. (Victoria Milko / Frontier)

Although Myat Thiha is no longer active in the ring he has become well known as the owner of a famous breeding cock, selling the bird’s offspring (and even eggs it has fertilized) to countries around the globe, including the United States.

“He was very famous. Everybody knew him during his time across the country,” Myat Thiha said of the cock. “Now I just breed him because I want to see and take care of him, not for fighting.”

Animals rights groups worldwide have been calling for a ban on cockfighting for many years, but Myat Thiha thinks the activity’s reputation is unfair.

“Our neighboring countries allow it legally but in Myanmar, the people assume the cockfighters are bad people,” Myat Thiha said. “In our cockfighting society doctors, engineers and soldiers participate. This is just their hobby – they are not bad people.” Although cockfighting occurs throughout the country, some locations are deemed the “best” for fights and gatherings.

“It changes every year,” Myat Thiha said. “In some years the Zwegabin festivals [in Kayin State] were the best, and Kyaukpadaung [in Mandalay Region] was another great place for years. But in Yangon, the highest cock fighting city, Saturdays are good fighting days.”

Early on a Saturday morning Myat Thiha and his friends are getting ready to leave for a cockfight, the men piling into a van for a long trip to the countryside.  For this trip they are skipping the suburbs of Yangon for the weekend and heading for a more rural venue, south of the commercial capital.

During the nearly five-hour drive everything becomes a friendly competition. At a stop for a meal, the men flex their literal and figurative muscles for a waitress, jokingly asking her who is stronger.  Videos of previous cockfights are passed around on iPads and iPhones, each more action-packed than the last.  Even stopping to buy snacks at a convenience store turns into a competition, seeing who buys the most. Their energy runs high, even as their petrol tank begins to run low after hours on the road.

Eventually the vast empty fields surrounding Yangon are left far behind, replaced by mountains with golden temples peeking through the clouds. Another few hours, and the van suddenly slows to a crawl, turning down a small, muddy road. It inches its way past fields of vibrant green betel leaf vines, finally arriving at the illegal cockfighting ring. 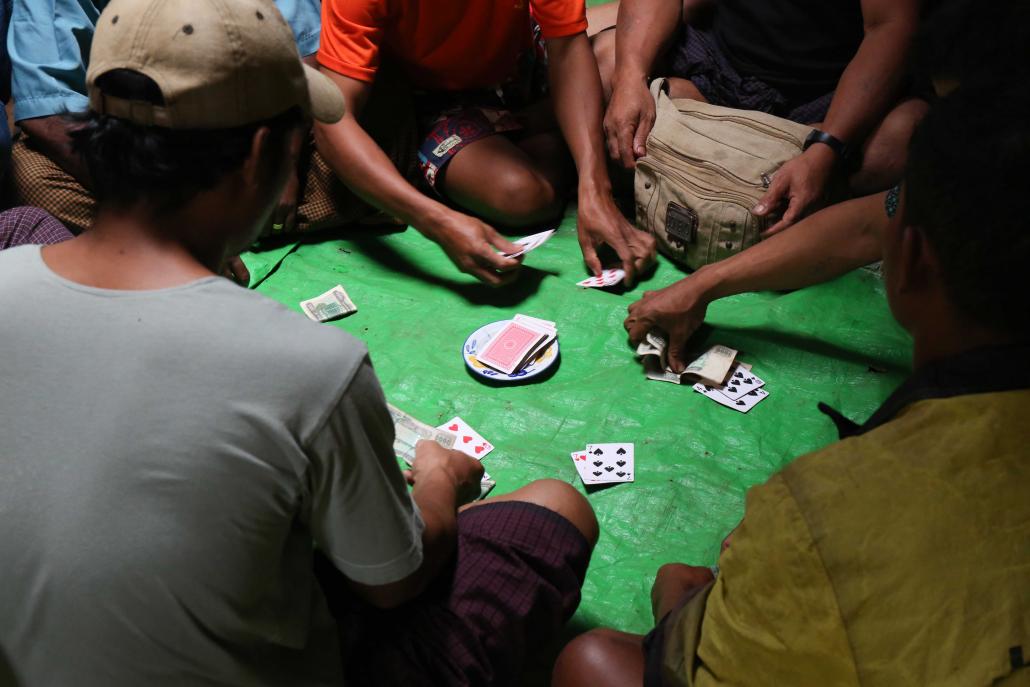 “Whenever you go to cockfighting places, you have to find the exits to run when the police come,” said Ko Tun Zeya*, 25, a farmer from Kawa Township, Bago Division. “If you are arrested, it would make your family lose face.”

At this venue the escape route possibilities seem endless.  About 50 motorcycles sit ready for a quick getaway, surrounding a rectangular open-sided arena, with a palm-thatch roof.

Except for a collapsible food stall, a betel leaf stand and an empty desk, the structure is largely empty, with a length of wire marking a large circle in the middle of the room. Apart from a few low-hanging fluorescent lights directly above the ring, there are no lights, signs, or any other indication of who might own the site.

Apart from a woman serving food and the owner’s wife, who doubles as the bookkeeper, the event is strictly men only. On the far end of the enclosure men are comparing cocks; some looking to buy and sell, others are there simply to admire the birds. Miniature skirmishes break out between the cocks.

In the Philippines, one of the cockfighting capitals of the world, and in some other countries, razors or spurs are attached to the bird’s natural spurs, but cockfighting in Myanmar takes a more organic approach, leaving the blades out of the ring. 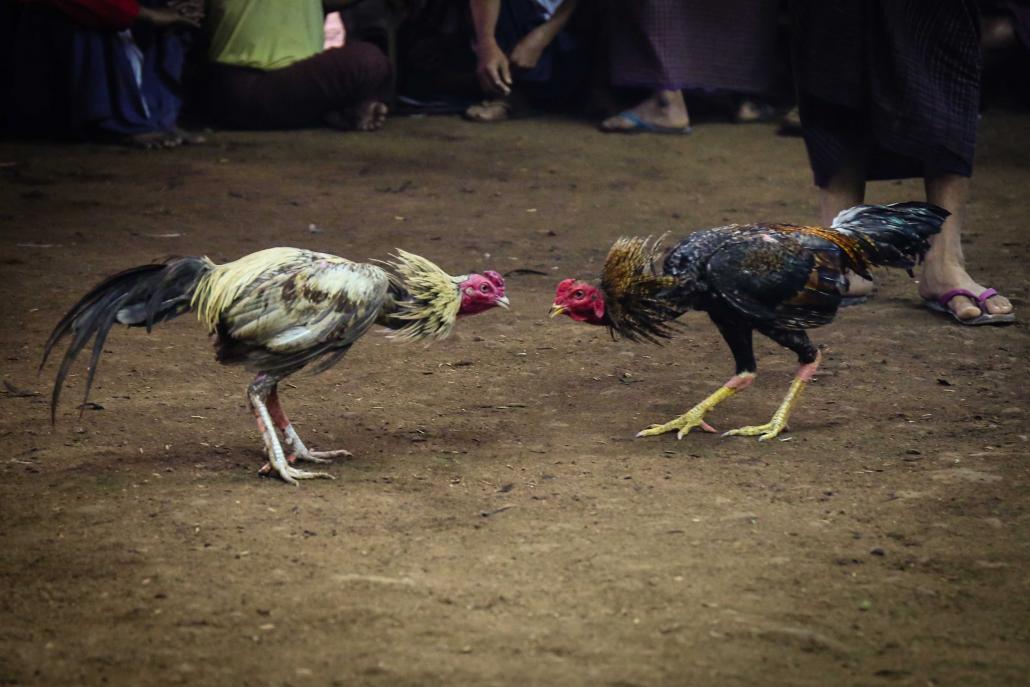 Cocks are nearly always fight-tested before they enter the ring for the first time. (Victoria Milko / Frontier)

“The good fighter cocks have to have good frame, wide chest, and good wings and tail,” said Tun Zeya. “And almost all cock fighters judge the cocks’ ability by test fighting first.”

Before the first match, the cocks are weighed and matched for fights. Senior members of the group crouch in a small circle, passing the birds from person to person, sizing up their spurs and estimating their weight class. Tension flares as one man’s cock is deemed unmatchable, while another man reties his bird to a pole, giving it time to rest before its fight.

“Not every cock gets to fight every time,” said Ko Than Soe*, 26, from Yangon. “We always try to make sure it’s a fair fight. It makes for better betting that way.”

The men slowly gather around the perimeter of the wire circle. Two buckets are suspended from a support beam: one is filled with sugar, that the cock handlers suck on during matches to produce saliva that they spit on the birds to keep them agitated and aggressive; the other bucket contains feathers that are gently inserted into the cock’s ears between rounds to test their reflexes and try to determine if they are badly injured.

Two men enter the ring with their birds, preparing them for the fight by wiping them down with wet towels and warming their necks with their mouths and hands. The birds are placed in the centre of the ring, and the fight begins.

At first the birds stare at one another, their beaks only centimetres apart. As soon as the first handler spits at his cock the ring becomes a whirlwind of kicking spurs, flapping wings and angry pecking beaks. The betting begins almost immediately, with men yelling across the ring and running to the bookkeepers’ desk.

During the fight the handlers move in constant unison with their birds, encouraging them with agitating clucking noises, spitting and waving their hands in the cocks’ faces. The fight goes on for early three hours. Myat Thiha, who has been sitting with the owner of the ring, leans over and whispers, “This is a long and fairly boring fight. It might be a draw, but then no one wins.”

But no more than ten minutes later one cock is on its back and unconscious (“But not dead,” Myat Thiha says. “We never want them to die.”), pushed to the edge of the ring, with the other cock standing over him – a winner finally declared.

The crowd utters cries of triumph and groans of loss. Men immediately flock to the bookkeeper’s desk to collect and pay their bets. The bookkeeper hands out neatly folded stacks of kyat, crossing names and numbers off her intricate handwritten list. 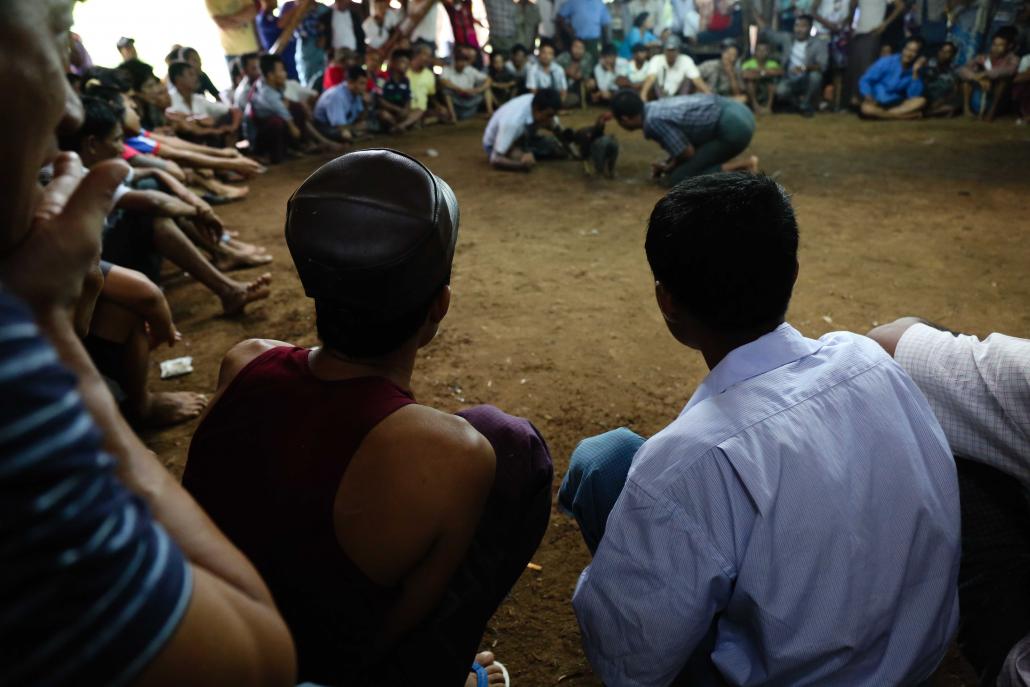 A crowd watches as two cocks are readied for the next fight. (Victoria Milko / Frontier)

“Police, officials, government… they all know about this place,” said U Myint Thet*, 49, a teacher in Mon State who attended the fight. “We just pay them, and they turn a blind eye to us.”

A smiling Myat Thiha displayed his winnings. He won K400,000 from the first match of the night, a small win for him.

“These days, betting fees of 5 to 10 million kyats is average for high class events,” Myat Thiha said. “For some amateur level fighting events they usually start at 40,000 or 50,000 kyats.”

But there’s little time to dwell on what was won or lost, as the next pair of cocks is entering the ring. The men begin to crowd around the perimeter, eyes on the birds as the fight begins.

*Some names have been changed.