The way people use the internet in Myanmar – and, in particular, the dominance of Facebook – has implications for businesses and advertising agencies.

While Facebook usage is high in many countries, a very late-stage adoption of smartphones and the internet has created a technology culture unlike anything seen overseas. So how did this happen, what does it look like and what does it mean?

To understand this scenario, look to pre-democratic Myanmar. “Myanmar never experienced technology like the rest of the world,” said Yu Yu Din, a former general manager of Wave Digital, a digital agency under Mango Myanmar Group.

There were cyber cafes in major cities but many websites and services were blocked. Skype was restricted, as was Gmail and Facebook. While Google, Apple and Facebook were expanding into the behemoths they are today, Myanmar was almost completely disconnected. Most people just didn’t use the internet because it either wasn’t available or was too expensive. SIM cards were also prohibitively expensive – until 2010, they cost thousands of dollars.

All of this combined to build tremendous demand within the country for mobile phones and internet connectivity. “When you didn’t grow up with that stuff, you want it even more,” said Yu Yu Din, who has 13 years of digital marketing experience in India and Myanmar.

And then SIM prices dropped dramatically, to K1,500 and cheap Chinese smartphones were to put them in. Data speeds were decent and restrictions on internet access had been lifted. Unlike in Western countries, telecommunications and computing and the internet were all coming online at the same time, in the same device.

Many first-time phone owners bought devices they didn’t know how to use and help was provided by small phone shops, who set up the phones and installed apps through a file sharing service called Zapya. For users who didn’t know what they could do on their new phones, a Facebook account was created and some pages were liked.

We tried this ourselves, paying K5,000 to get a store-made Facebook account, which came with five pages pre-liked; mainly newspapers and the essential Myanmar Model Girls page. While waiting, we met a 67-year-old man from Yangon who owned two phones, 3 SIM cards and two Facebook accounts. His favourite app was Viber, which he used to send Buddhist quotes to his friends and family. He was a big spender: about K80,000 a month on top ups, mostly used to call family overseas. We asked him if he used Google; he’d never heard of it before.

You could say he represents the average Myanmar phone user, for whom Facebook meets many of their needs. “Myanmar people are a social people,” said Yu Yu Din.

Furthermore, technical issues with competing Unicode and Zawgyi text encoding standards have hampered the growth of Myanmar-language content, something that Facebook seems to have done the best to address so far.

Mr Shane Neubronner, general manager of Helium Communications, said that for a first-time phone user, Facebook offers “everything you could wish for. There’s search, news, information, things about people, celebrities. Your knowledge [of the service] grows, and you’re going to spend more time on Facebook.”

And that’s what has happened. Myanmar has a unique internet culture: Facebook now accounts for over 85 percent of all internet traffic, and most people don’t search or view web pages.

So where do advertising companies direct their ad spend? Unsurprisingly, email and email marketing never took off here. The phone number is more important: on Grab, email is optional. Digital marketing companies invest heavily in Facebook; it can be a large percentage of their clients’ total ad spend. 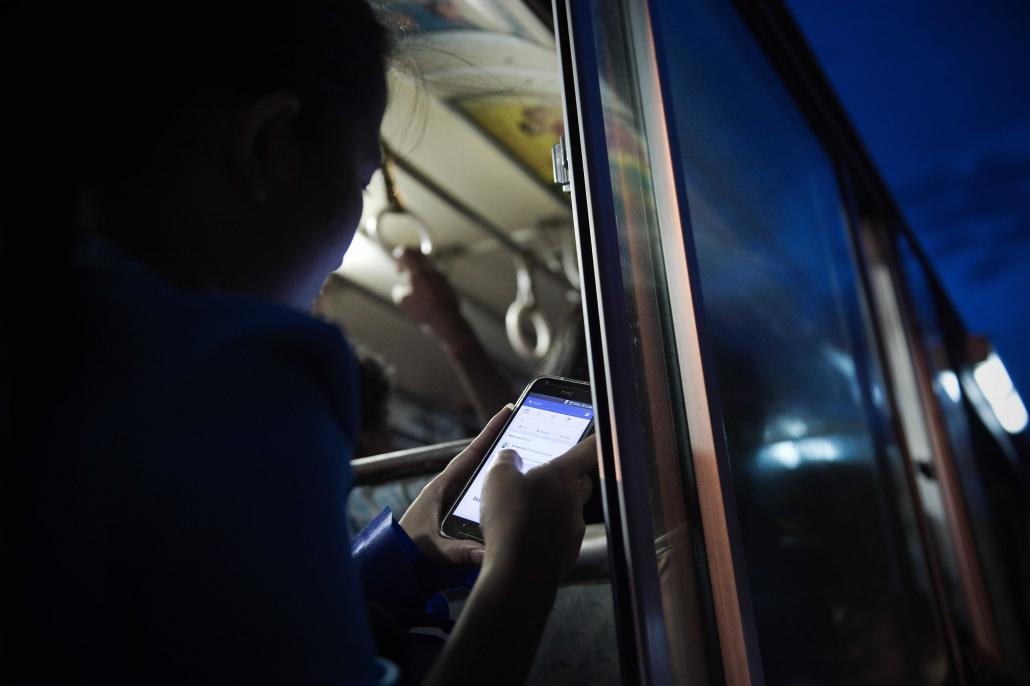 A young woman looks at her Facebook wall while travelling on a bus in Yangon in August 2015. Facebook dominates data traffic in Myanmar, accounting for up to 85 percent. (AFP)

Mr Anthony Larmon of Echo Myanmar said this is unlikely to change. “It’s all Facebook. Myanmar people find something they like and they stick with it.”

Neubronner recalled launching a campaign encouraging users to upload an image to a small website. It was a failure: People didn’t want to click out of Facebook, loading was unreliable and customers were unfamiliar with web browsing. Data price sensitivity kept users on Facebook because mobile operators charge a lower rate.

YouTube seems to have been made redundant by Facebook’s own video service. What about Instagram? It skews more for the foreign-educated, the elites and younger digital natives. It remains a small market, in comparison to Facebook’s 14-18 million daily users.

So how should companies run their digital platforms? For business to consumer (B2C) companies, a comprehensive Facebook page is essential. Companies should expect and prepare for large amounts of leads, complaints and queries through the messaging platform. Because most people only use Facebook, there’s increased competition for ad space.

Thankfully, though, both search engine optimisation and search engine marketing are less important. For some, a consumer-facing website might not even be necessary. Neubronner recommends that brands with nutritional information, regulatory disclosure requirements or corporate governance information maintain this information on a website, but B2C content should remain on Facebook.

Myanmar is a great opportunity for fast-moving consumer goods, or FMCG. Currently, Facebook’s audience is 64 percent male, which suggests that many households still only have one phone. As more women – who are the main decision-makers in FMCG purchases – come online, there are great opportunities to target content to the right customer. Dutch Lady is doing very well in this space, even running a chatbot for 24/7 customer enquiries through Facebook Messenger.

The same methods could work well for NGOs. Facebook can be used as a platform for good to help reach the right people at the right time. NGOs should be using this opportunity to supply their target demographics with helpful information on things like pregnancy, diet advice, family planning or financial advice.

Our advice for B2B is surprisingly different. Professionals are the one demographic that uses email, and are comparatively large users of LinkedIn. Mr Justin Sway of JobNet.com.mm and Ko Wai Phyo Kyaw of CarsDB both said LinkedIn was important for finding potential candidates and business leads. As the professional class grows, there exists an opening for Google to enter through their business tools packages, as well as more traditional SEO and SEM. This is mainly due to these users having higher levels of foreign education and being comfortable searching on Google in English.

Online classifieds advertising is one of the few other areas where Facebook is not dominant. The more educated user base and the unsuitability of the Facebook app for listings have enabled classifieds companies like JobNet and CarsDB to develop successful mobile-focused sites. Of course, many listings are still posted to Facebook (and LinkedIn for JobNet), but the main activity happens on their own sites. Their recent success suggests that this particular user base is willing to try new things.