'We hope that now is the time to rebuild the nation'

Myanmar’s peace process has made some steps forward since reforms began under the U Thein Sein government in 2011. In October 2015, eight ethnic armed groups signed a Nationwide Ceasefire Agreement with the government, despite some of the largest groups in the country – including the Kachin Independence Army and the United Wa State Army – refusing to join the agreement.

The new government, under the leadership of Daw Aung San Suu Kyi, has promised to take the lead on the peace process. In August, it plans to host the so-called 21st Century Panglong Conference, named after the original meeting held by Aung San Suu Kyi’s father Bogyoke Aung San in 1947.

Colonel Hkun Okker, patron of the Pa-O National Liberation Organisation, one of the signatories of the NCA, has played a key role in the peace process. He spoke to Frontier about the approach taken by the new government and what steps are required in order to achieve genuine peace in Myanmar.

What is the current situation regarding the peace process?

Peace is a long process. The stage we have reached is a ceasefire at three levels – [a bilateral] agreement at state and union levels, as well as the Nationwide Ceasefire Agreement. Eight ethnic armed groups have signed at all these levels.

In accordance with the ceasefire agreement treaty, the eight groups took part in the Union Peace Conference held in early 2016. The conference laid the foundation for peace talks, but political dialogue has not yet begun.

Having laid the foundations, the old government told us to move forward with the new government, who have taken control of the next stage; political discussion.

To explain the process, there is a ceasefire process and a political process. We have reached the time that we can begin preparing for the conference known as the 21st Century Panglong Conference, which is a continuation of the political process.

The new government has taken a new approach to the peace process compared to the old one. For example, political parties that did not win any seats in the election are being told to join civil society. What is the ethnic minority groups’ view of this?

It is still being negotiated. According to State Counsellor [Aung San Suu Kyi], political parties need to have popular support, if not they should join civil society.

They are not allowed to enter the conference where the political parties are making decisions. This is the government’s policy, but most of the parties that didn’t win are from the country’s ethnic [minority] groups.

Whether they should be included or not is something for the government and the signatories to consider. Government policy is part of it, but we [the signatories] have to discuss this because there are many ethnic minority parties and we have to ensure that the negotiations do not have a negative impact for them.

The so-called 21st Century Panglong Conference is expected to take place in August. The political discussion framework must be finished before then, is that possible?

Despite there being a lot of work, nothing is impossible. If you make a firm decision to complete it, it will be completed.

In the past, we held the national signing event [for the National Ceasefire Agreement] in October 2015, and the Union Hluttaw approved it. According to the treaty, we needed to complete the framework for the next step of the process in 60 days, although in fact we had about a month to complete it.

We were able to achieve this, because we made a firm commitment and carried it out. Now, we have more time than before.

It has been planned for a long time. Some of the political discussions framework will change, but it won’t be fully amended, so we have time. I hope we can move forward.

There have been some changes to the approach taken towards the peace process under the new government. How do the ethnic minority groups feel about this?

Our side has not reduced its collaboration. It was different when we worked with U Aung Min, the main negotiator under the U Thein Sein government. It was quite complicated to reach the ceasefire deal at the time.

What I want to say is that the attempts of the former government in the peace process are very important. As it had been part of the military, the U Thein Sein government had to work hard to have legitimacy from the international community. On the other hand, they had to lead the peace process, so this would have been difficult to balance.

Now we can say that the chances of success in the peace process are more likely under the new government, because they won the popular vote.

In spite of the legacy it received from the previous government, the new government is in a situation to be able to effectively carry out the peace process with firm determination.

The new government doesn’t need to try as hard as the former government to be recognised for its legitimacy. We hope that now is the time to rebuild the nation. 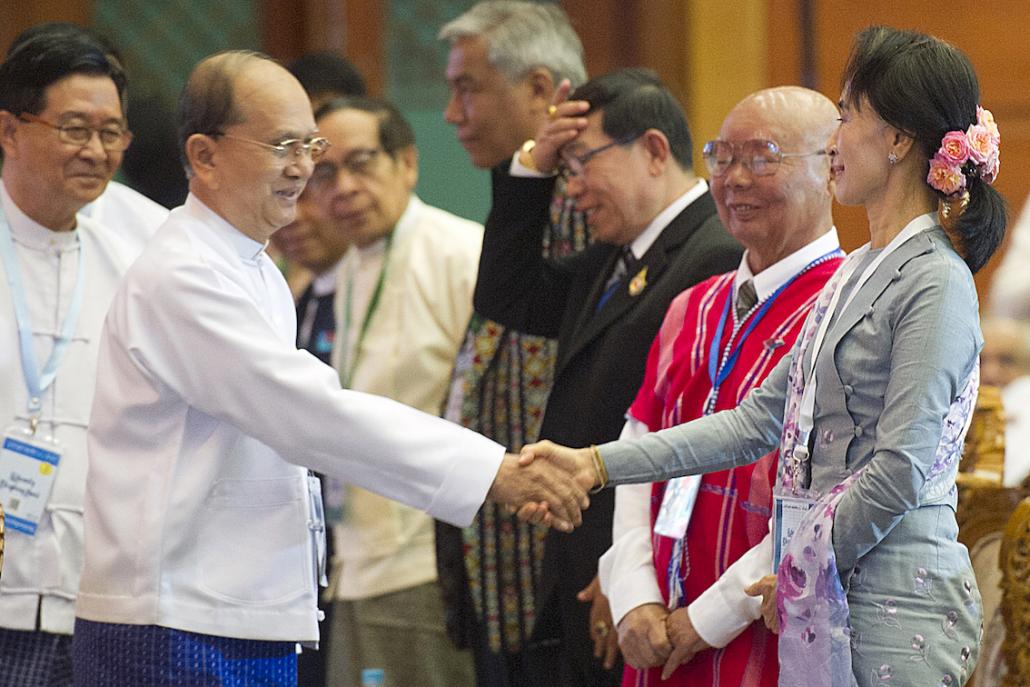 Has there been any change from the military regarding the peace process since the new government took power?

The military is responsible for abiding by the ceasefire deal reached with the former government and senior leaders of the military. It is necessary for the military to guarantee the implementation of the contents of the deal.

How is the Nationwide Ceasefire Agreement being implemented?

The most obvious and effective piece of implementation is that we have formed the Joint Monitoring Committee, which has been organised at the union level. It is now going to be formed at state level, where organisations go to the states where the ceasefire has been signed and monitor what is happening. This is a success of the military and the signatories.

The state counsellor met with the joint monitoring committee before she started leading the peace process. Another committee is a joint committee that consists of political parties that will supervise the political talks. According to the current policy, the committee will lead the 21st Century Panglong Conference.

What about the situation regarding the non-signatories?

I’m sorry, but I don’t want to comment about those groups. It is better if they answer this question. In the past, they have said would collaborate with the new government.

The current government has ruled the country for three months, we have to wait and see whether [the non-signatories] will collaborate.

We won’t stop to watch because the peace process is still ongoing. It would be best if they follow quickly.

Essentially, the aim of the peace process is to achieve equal rights for all ethnic groups. In order to achieve this, the constitution must be amended. When the time comes, do you hope the negotiations with the military will be successful?

I think the military will compromise to some extent on amending the constitution. They haven’t yet said they don’t want to amend it.

There are many things to be negotiated for achieving this and we can expect the military to watch closely.

In the Kayin BGF debacle, the buck stops with the Tatmadaw