‘We are human and so are they’

A high school in Sittwe has nearly 4,000 Muslim students and a Rakhine Buddhist headmaster who believes that all children have the right to an education.

THE Buddhist and Muslim communities in the Rakhine State capital, Sittwe, have had little communication since communal violence swept through the state in 2012.

The main reason is because the Muslims have been segregated from the rest of the population and are confined to internally displaced person camps around the city, including in Aung Mingalar ward. Some other IDP camps are home to ethnic Rakhine who were left homeless by the violence, although they are able to enjoy freedom of movement, unlike much of the city’s Muslim population.

It is unusual for Rakhine to enter the camps for Muslim IDPs, and it is not easy for Muslim IDPs to leave the camps. They need armed escorts when they go to Aung Mingalar, the only place in Sittwe they are allowed to visit.

To this day it is not possible for Muslims to travel freely in Sittwe and it is also risky for Rakhine to visit the IDP camps or Aung Mingalar ward, due to the lingering tensions between the communities.

There is at least one Rakhine Buddhist who’s a regular visitor to a Muslim area. U Maung Than Shwe, 46, is the headmaster of the Basic Education High School in Thet Kay Pyin village, about 20 minutes by motorbike taxi from downtown Sittwe. An IDP camp at Thet Kay Pyin houses Muslims from throughout Rakhine and is one of the biggest in the state. 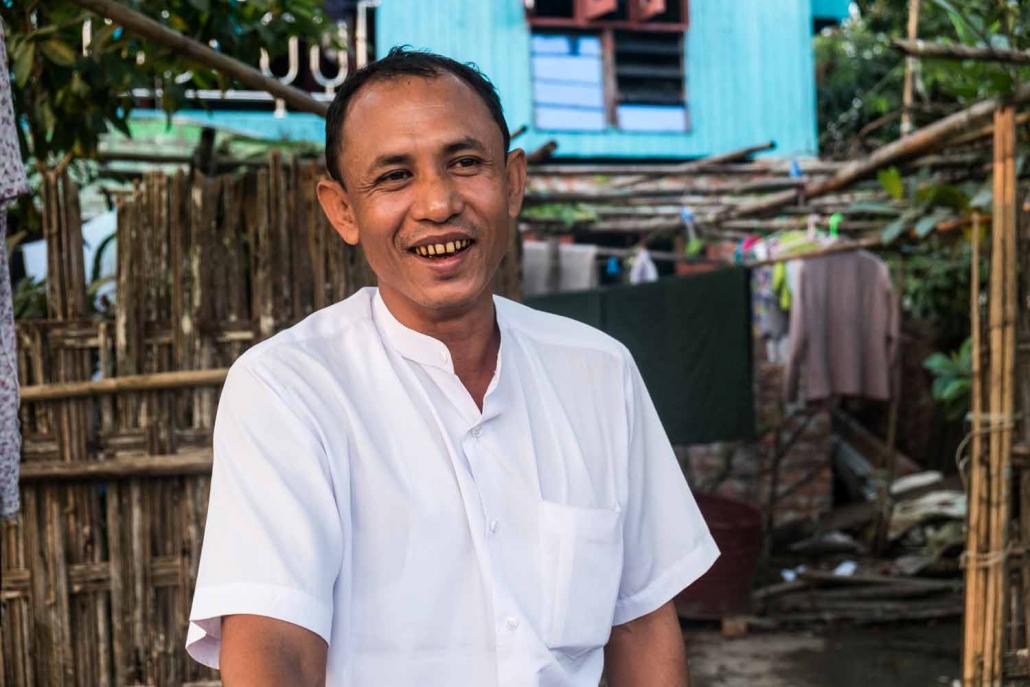 U Maung Than Shwe at his home in downtown Sittwe, Rakhine State. (Teza Hlaing / Frontier)

The school has around 3,900 students, about 1,000 of which are from Thet Kay Pyin, and all of them are Muslims. Maung Than Shwe has been headmaster there since 2014, when tensions boiled over again and Rakhine mobs ransacked the offices and warehouses of international aid organisations in Sittwe amid accusations that Muslims were receiving preferential treatment.

The previous headmistress found it difficult to manage the school after the violence and turmoil of 2012. After officials from the President’s Office became aware of her plight during a visit in 2014, the state education department asked Maung Than Shwe if he was interested in becoming headmaster.

“We are human and so are they,” he said, explaining why he accepted the request. “I came here to do the right thing, for the children’s education.”

Travelling to the school for the job interview involved some hard bargaining because most motorbike taxi drivers in downtown Sittwe were reluctant to travel to a heavily Muslim area.

Maung Than Shwe rides his motorbike to the school each day from the modest, two-storied house in Sittwe’s Danyawady ward where he lives with his wife and three children. The youngest is a toddler and the eldest is in Eighth Grade.

“I feel scared sometimes because I have nothing more to defend myself than a pen. But in my life I developed the mindset of wanting to do the things that other people find difficult. I accepted this job with that mindset from the start,” he told Frontier.

All of the school’s teachers are volunteers from the Muslim community. Government-appointed teachers are named on an official list of the personnel at BEHS Thet Kay Pyin but they teach at other schools. 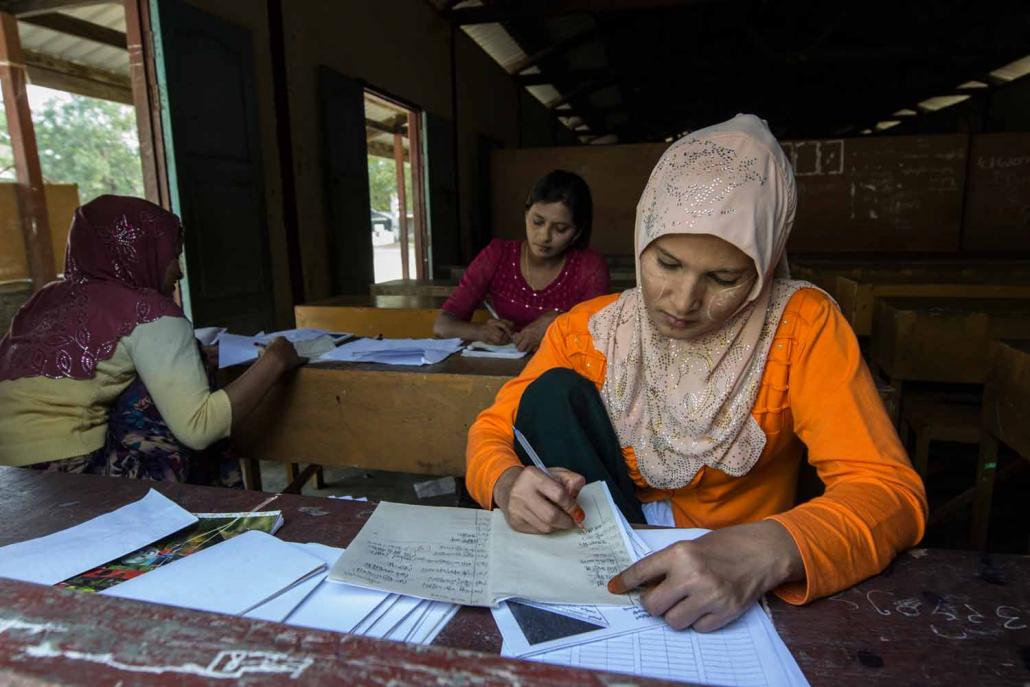 The high school in Thet Kay Pyin has about 3,900 students, of whom around 1,000 are IDPs. Some of the volunteer teachers are also drawn from the IDP camp population. (Teza Hlaing / Frontier)

The deputy headmaster, U Khin Maung, 57, is a displaced Muslim. In 2012, he was teaching at a high school in Pauktaw Township, across the Kaladan River east of Sittwe, but lost his home and his job because of the violence. He has since lived with family at the Thet Kay Pyin IDP camp.

Khin Maung said that as well as fulfilling his responsibilities as a headmaster, Maung Than Shwe also played a liaison role between the school and the outside world. For example, he said, Maung Than Shwe sometimes acts as a messenger on behalf of the volunteer teachers, who cannot leave the Thet Kay Pyin village area.

It quickly becomes obvious to those who visit the school that Maung Than Shwe is greatly respected by his colleagues. Khin Maung and the volunteer teachers show their respect by referring to him as “saya gyi”, an honorific reserved for the most highly regarded teachers in Myanmar society.

Khin Maung said Maung Than Shwe was also respected for not referring to Muslims as “kalar”, a derogatory term for foreigners that is often used in Myanmar to describe those with ancestors from the Subcontinent. Its use is as sensitive in Rakhine as “Rohingya” and “Bengali”.

“I never refer to them as ‘kalar’ because I know they don’t like it,” Maung Than Shwe said.

He also takes care not to refer to his students and their teachers as Rohingya to avoid causing anger in his own community.

“I call them Muslims,” he said. 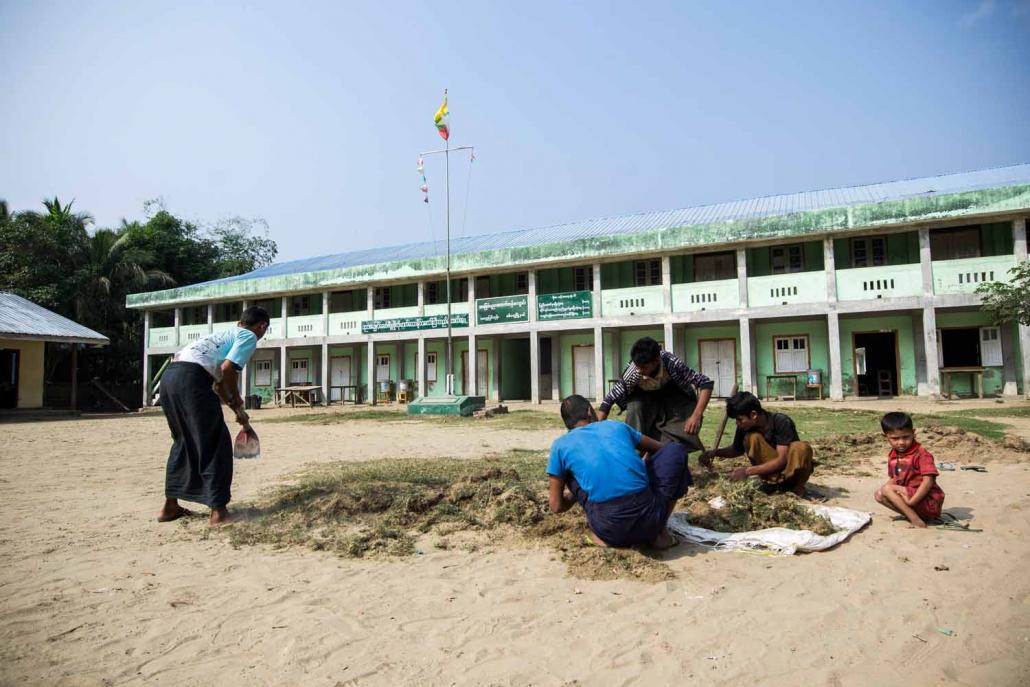 Maung Than Shwe said his solution to avoiding problems with the two communities was to put aside the issue of religion.

“Whether your students are Muslim or Buddhist, if you only think of them as students it avoids problems; it is also the key to communicating with them effectively,” he said, adding that his role was not his first experience of working in a Muslim area, having previously spent one and a half years teaching at a school in Maungdaw Township, northern Rakhine State, which is a predominately Muslim area.

Despite the respect he has earned at the Thet Kay Pyin community, Maung Than Shwe said he stayed away from the school for a week last year when communal tensions soared after the deadly attacks by militants in Maungdaw.

When he was transferred to Thet Kay Pyin it was as a teacher, a position he held for a year before being made headmaster, despite performing the principal’s role at the school. It has jumped two levels under his watch, from Middle School to Associate High School and then to High School. Additionally, 21 students have passed the matriculation exam since he became principal, including five who earned distinctions.

His plans for the immediate future include convincing the government to provide salaries for the school’s 46 volunteer teachers as well as provide funding for another two buildings to ease overcrowding. He said he expects to be headmaster at BEHS Thet Kay Pyi for two more years.

“I am proud of what I have achieved and I am hoping for a promotion as a reward for my efforts.”

Top photo: Students from Thet Kay Pyin village, which is home to a large number of Muslim IDPs, walk home from school at the end of the day. (Teza Hlaing / Frontier)