YANGON — Hundreds of thousands of voters – including President U Win Myint – cast ballots in by-elections across Myanmar today from 6am to 4pm, with a domestic election-monitoring group reporting a mostly problem-free polling process.

Thirteen seats were up for grabs, including four Pyithu Hluttaw (lower house), one Amyotha Hluttaw (upper house) and eight state or region Hluttaw seats, with more than 1 million people eligible to cast votes.

In Yangon, attention was focused on No 3 polling station in Kyarkwetthit ward in Tarmwe Township, where hundreds gathered to see the president and his wife vote.

The by-election in Tarmwe was being held to fill Win Myint’s former seat in the Pyithu Hluttaw, which fell vacant when he was elevated from lower house speaker to president in March. NLD candidate U Toe Win, a former activist and political prisoner, is expected to win the seat comfortably.

At about 10am, United States ambassador Mr Scot Marciel also visited the polling station, where he greeted election commission officers and observed voting for around 20 minutes.

“We came to show support for the election, and are happy to see people voting,” Marciel told Frontier. “It looks like it’s going smoothly. We didn’t see any difficulties.”

Frontier saw accredited observers from the embassies of the US, the UK and Japan monitoring polling in Yangon.

The crowd waited through the morning for Win Myint, making way occasionally for Tarmwe locals who were coming to vote. Most of those waiting appeared to be media personnel, although there were also around a dozen people who had petitions – mostly related to land disputes – that they hoped to be able to give directly to the president. When Win Myint came and went in the early afternoon, he waved to the crowd but did not make any remarks – though NLD party workers accepted petitions on his behalf. 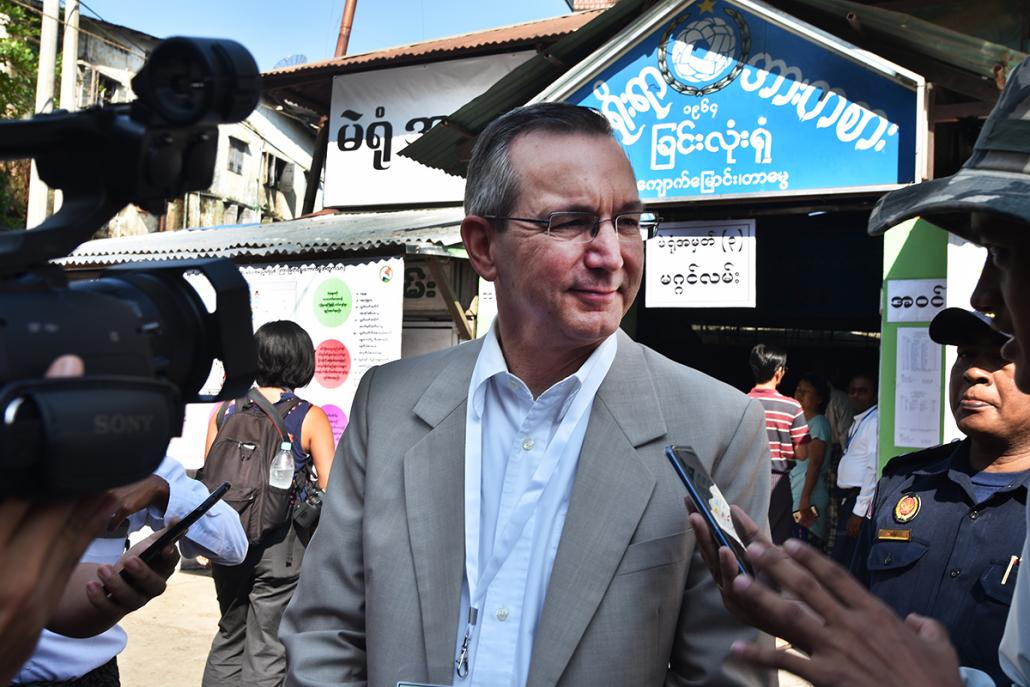 Given the National League for Democracy’s huge majority, little was ostensibly at stake in the by-elections and there had generally been low interest and minimal campaigning throughout the official two-month campaign period.

However, the vote’s significance is likely as a barometer of political change across Myanmar since the 2015 election, both in NLD-dominated Bamar areas and ethnic minority regions.

In Tarmwe, turnout appeared modest. At the No 3 polling station, which had 908 eligible voters, about 50 percent had voted by the early afternoon, said U Thein Paing Oo, who directs the election commission branch in Tarmwe Township.

However, when Frontier visited other stations in the township throughout the day, there appeared to be few people coming to vote. This echoed turnout in the 2017 by-elections, which was around 34 percent.

“I don’t go to vote today,” said Tarmwe resident Ko Kyaw Zin Htun, 29. “Even if I vote, it won’t lead to anything special … it seems that no one can get the electricity to work properly.”

Among those who did vote was enthusiastic NLD supporter Daw Khin Ma Ma, 50. “I never considered voting for anyone other than the NLD – I voted for the party in the 2015 election as well. All five people in my family who are eligible to vote backed the NLD today.”

The mood was similar in the other seat up for grabs in Yangon, Seikkan-2. With barely 1,500 eligible voters, it’s one of the smallest in the country, and was won in 2015 by the NLD with 58 percent of the vote.

“I came here to see how people are voting today. I’m on the electoral roll but I didn’t want to vote. It doesn’t matter who I vote for, it won’t bring any progress for us,” he said. 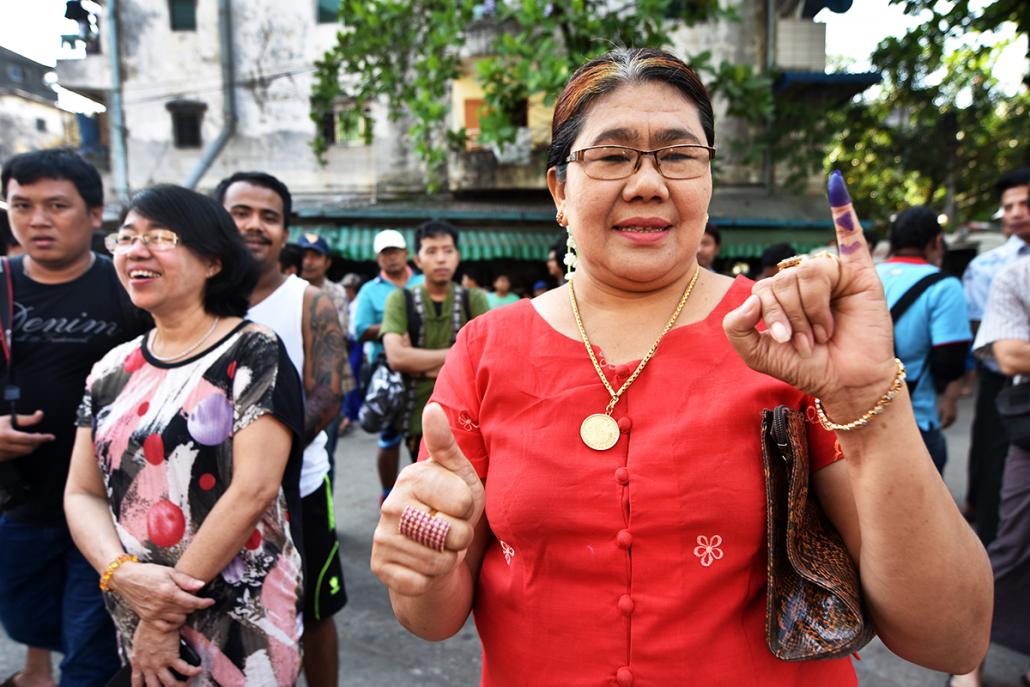 A voter shows her inked finger after casting her ballot in Tarmwe, Yangon. (Steve Tickner | Frontier)

However, interest is likely to be higher in more hotly contested seats in ethnic states, particularly Rathedaung-2 in Rakhine State where the son of jailed politician Dr Aye Maung is contesting as an independent against his father’s old party, the Arakan National Party.

In the Amyotha Hluttaw seat of Kachin-2, ethnic Kachin political parties got their first chance to take on the National League for Democracy since agreeing to merge earlier this year.

As they weren’t able to register the new party in time for the by-elections, a candidate from the Kachin Democratic Party, Gum Grawng Awng Hkam, was running with the backing of the other parties.

Prior to the vote, Gum Grawng Awng Hkam played down his chances of victory, pointing to the fact that ethnic Kachin accounted to only about 40 percent of the population in the seat, which encompasses the state capital Myitkyina.

Daw Kai, a 60-year-old ethnic Kachin from Sitapu ward in Myitkyina township, said both she and her husband voted for the KDP candidate.

“There was no special reason to vote for the KDP. We’re not much interested in politics,” she said.

Hkan Nang, who also resides in the seat, told Frontier he didn’t vote because he was travelling for business, and his family members also didn’t vote. However, he said he preferred the NLD candidate, who was a hot favourite to retain the seat for the party. 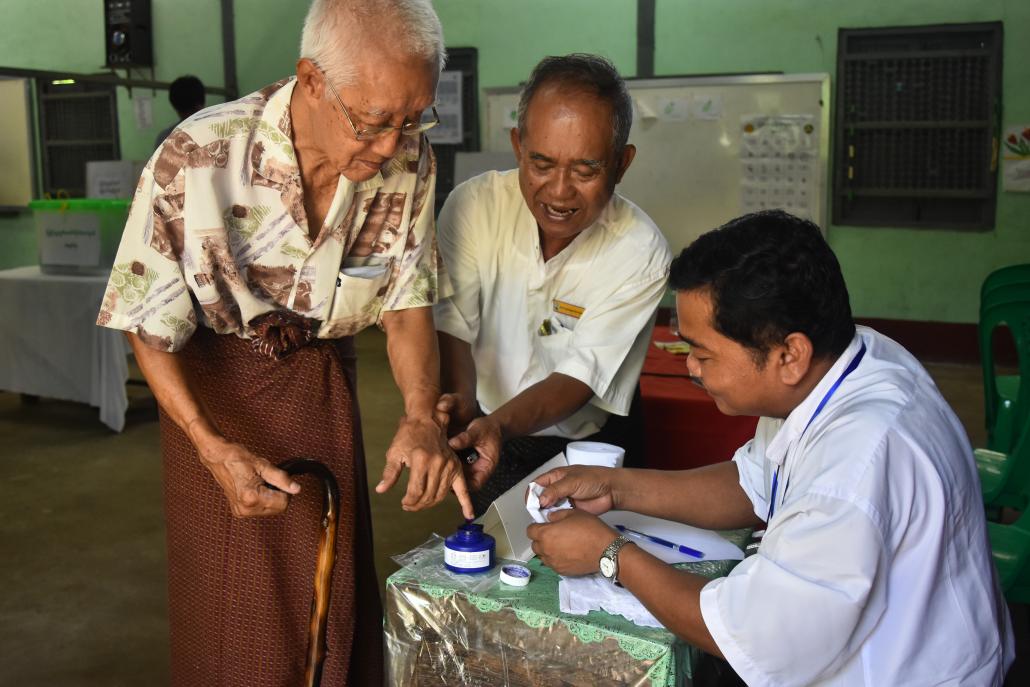 An elderly voter has a finger inked by a polling officer at a station in Tarmwe, Yangon. (Kyaw Lin Htoon | Frontier)

Monitoring group People’s Alliance for Credible Elections (PACE), which teamed up with gender equality group Phan Tee Eain to deploy 579 observers across 12 townships where by-elections were happening, said in a statement this afternoon that the voting process was mostly smooth but some polling station officers had initially barred election observers’ access to polling stations. Eventually all 579 of its monitors were allowed into the stations, it said.

“Even though the incidents where observers were not allowed to observe the elections initially because of confusion by polling station officials may not have a big impact in these by-elections, it is important to have more effective training for polling station officers for the 2020 general elections,” said Sai Kyaw Swar Myint of PACE.

Another issue identified was a lack of facilities for voters with disabilities, with 54 percent of stations observed not having a booth set up for voters using wheelchairs.

PACE also said that it had not yet received observer reports from Chin and Shan states due to communication difficulties.