US Ambassador: 'We’re now in an era of partnership'

Mr Scot Marciel was the principal deputy assistant secretary of the State Department’s Bureau of East Asian and Pacific Affairs before assuming his role as ambassador to Myanmar earlier this year. He spoke to Frontier’s Sean Gleeson.

Your predecessor, Mr Derek Mitchell, was closely associated with former Secretary of State Mrs Hillary Clinton. By contrast, you’ve been a career diplomat focused mainly on Southeast Asia. Is your appointment a sign that Washington no longer sees the relationship between the United States and Myanmar as requiring special management?

I wouldn’t say that. I mean the President of the United States and the Secretary of State make our policy. As ambassadors we carry out that policy. We certainly offer our thoughts but we carry out that policy. So what I would highlight is the continuity. I’ve been working on Myanmar issues for more than a decade now, off and on, and policy has been very consistent – one of what we can do to support the people of Myanmar try and move toward democracy and peace and greater prosperity.

Obviously when the reforms began here, that created an opportunity to engage more, but I think it’s been very consistent and I wouldn’t read too much into what individual happens to operate in this position.

Much has happened in bilateral relations since your term began in April. The first Peace Corps contingent has arrived, State Counsellor Daw Aung San Suu Kyi has visited the US for the first time as de facto government leader and the Obama administration has lifted sanctions. Some commentators say engagement has not gone far enough. For example, Professor David Steinberg has called for closer military relations. Is this something the US government is considering?

Everything that we’re doing here and have been doing is to support the ongoing democratic transition, the peace process and the reform effort. That includes the engagement that we do have with the military, which remains limited.

Our engagement with the military will remain designed to encourage further reform, support for peace, and strengthening the democratic transition. Our ability and willingness to expand the military-to-military relationship will be closely related to how progress moves in those areas.

So we do have some engagement, we’ve had some Myanmar military officers, for example, go to the Asia-Pacific Center for Security Studies in Hawaii and participate in courses, which I think is helpful and useful, and we’ll continue that.

During a visit to Kachin State in September you met people who had been displaced by the fighting that has been taking place there since a ceasefire collapsed in 2011. What message did they have for the US government and has its confidence in the peace process been affected by the fighting in Kachin and elsewhere?

First, we strongly support the peace process. Second, we’ve always known – and I think people closely engaged in the peace process know – this is going to be a long and challenging effort to achieve peace, [along with] the political dialogue that would follow it.

In Kachin, what I heard from people, in the IDP camps and outside, was concern that in their view the fighting was escalating. This was causing a lot of concern as well as humanitarian problems, and specific concerns as well about the restriction of humanitarian access to IDPs in parts of Kachin State.

We’ve said publicly and privately that of course we would like to see those engaged in the fighting to pull back and end the fighting. We would also like to see humanitarian access restored to the IDPs. I think this is important both in terms of protecting civilians, but also to promote confidence among the population in the peace process.

So it’s a challenge, certainly, and it’s never a good thing to have an increase in fighting. We’re concerned about it, and we’ve expressed hope that the fighting will end. 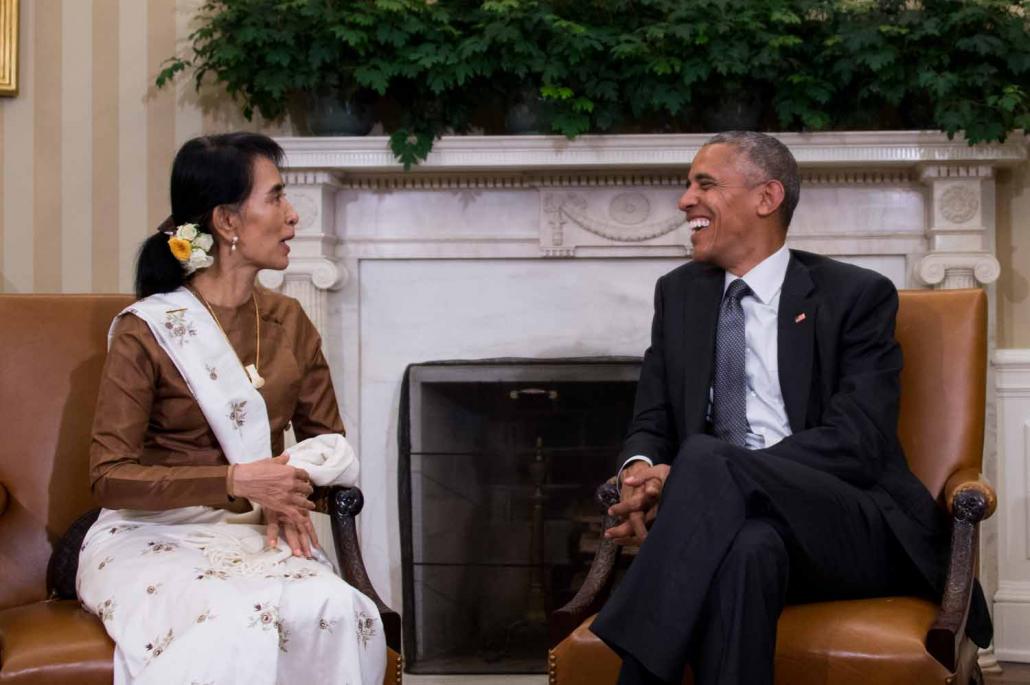 You said after the lifting of sanctions was announced that the US government would continue to advocate privately and publicly on issues of concern, such as human rights.  Are the Myanmar government officials you meet receptive to concerns you raise about the fighting?

We see our role as not being here to say, “You should do this, you should do that,” but as a friend and a partner who wants to see democracy strengthened and the peace process succeed. We talk to the ethnic armed groups, we talk to the government, we talk to civil society, and we listen a lot to them. We see our role as passing on information, highlighting concerns, including to the government – either that we’ve observed or that others have raised with us. And I think we have a very good dialogue on that.

There have been credible reports that the security forces have committed human rights abuses, including extrajudicial killings and rapes, in northern Rakhine State since the deadly attack on border guard posts on October 9. What have you been saying to the government about the attack and its aftermath?

What we’ve said and what our view is, first the attacks on the border guard posts are unacceptable. And we’ve expressed condolences for the deaths of the police and border guard officers. It’s of course entirely appropriate for the government to respond and to try and catch the attackers, but also to try to provide security for the civilian population in the region.

We’ve of course seen and heard these allegations of displacement, of villages burning and human rights violations. This is why it’s important to have as much transparency as possible in these operations. Including, we hope, access for credible international players to be able to go and see for themselves. It’s impossible from here to know what all the facts are.

I think the more the international community and others have access to the area and see what’s happened, the better.

(Editor’s note: The week after this interview was conducted, Ambassador Marciel joined a government-supervised tour of Maungdaw with other diplomats and senior United Nations officials. After the delegation’s return, it was announced that humanitarian aid would be restored to Maungdaw District. Restrictions on foreign journalists remain in place.)

Have you been surprised by the extreme sensitivity in Myanmar over the situation involving the Muslim community in Rakhine? The day after President U Htin Kyaw accepted your credentials as ambassador in April, there was a protest outside the US embassy to condemn it for using the term “Rohingya” in a statement of condolence about a boating tragedy off the Rakhine coast.

It’s clearly an issue where there’s a lot of history, and a fair amount of emotion behind it. I think all of us who are working to try to ensure better communal relations, peace – and in the long term, development and stability – have to be very aware of that. It’s a huge challenge for the country.

It’s not unique to Myanmar to have challenges in inter-communal relations, and each place is a little bit different, but it’s not just a government policy issue. It does get to some core feelings that a lot of people have. It is, as you said, extremely sensitive.

Many have been pleasantly surprised by the progress Myanmar has achieved in its transition towards democracy. There has also been a dramatic, positive change in relations between the US and Myanmar. Where do you want that bilateral relationship to be when your term as ambassador ends in about three years?

I’d go back to what I said earlier. Our approach for years has been about wanting to support the people of Myanmar as they try to move to and then build democracy, have peace and economic relations. The progress on those fronts, which has been remarkable, has certainly enabled us to build the relationship to a very healthy point at this time.

My hope would be that Myanmar continues along its path of moving toward peace and a productive political dialogue, greater prosperity, stronger democracy, and at the same time that our relationship continues to strengthen. That we not only have a good government-to-government relationship, which we do, but that the ties between institutions, whether it’s businesses, universities or others, become much stronger.

I think the announcement that President Obama and Aung San Suu Kyi of a new US-Myanmar partnership in August was significant. It highlights that we’re now in an era of partnership, and we want to grow and build that in a way that supports Myanmar’s continued progress.