A little-noted change in the Tatmadaw’s public statements has big implications for the peace process, military relations and the country’s defence capabilities.

AT THE first Union Peace Conference in January 2016, the Tatmadaw outlined a vision to transform itself into a “Standard Army”. Although Standard Army was not mentioned in the Defence White Paper published in late 2014, and no official documents on it have been released to the public, it has become the Tatmadaw’s official position, and one that is quoted frequently by Commander-in-Chief Senior General Min Aung Hlaing.

So what is the Standard Army? Here are five things we know based on the military’s discussion points during the political dialogue process.

1. There is no interchangeable term for Standard Army

It is a unique term. The Tatmadaw uses the English expression “Standard Army” and never a Burmese translation. It is not the same as a “professional army”, although the media and international organisations often use this expression in its place. “Standard Army” is also different from “federal army”, which has been proposed by ethnic armed groups during the nationwide ceasefire negotiations and political dialogue. The Tatmadaw’s position is that it is already the one and only Union army, as different ethnic groups serve throughout its ranks. Through modernisation, they will transform this one and only Union army, the Tatmadaw, into a Standard Army. Although there is no official or clear rationale for not using the term “professional”, it may be due to connotations with mercenaries, and with civilian control or oversight.

Transforming into a Standard Army is not the same as security sector reform (SSR) that is supposed to take place as part of the peace process. The Tatmadaw position on SSR is to conduct localised reforms in post-conflict areas. This contrasts with the ethnic armed group position; they have proposed a broader SSR process. The Standard Army transformation is an internal process of the Tatmadaw, but one that will be supplemented by the SSR plans that are expected to emerge from political dialogue over the next three to five years.

3. It represents a transitional phase in the official military doctrine

In 1988, the Tatmadaw adopted a new military doctrine – its third since 1950. It is unclear whether the Standard Army is within this doctrine, or whether it represents a new phase or a new doctrine entirely. Since 1998, the doctrine has been described as “the people’s war under modern conditions”. During the first Union Peace Conference, it was restated as “supporting the Tatmadaw through the people’s war strategy for national defence”.

There has been no official announcement of a new military doctrine. At the same time, some elements of the doctrine have become less prevalent since 2010. There has been little new recruitment and training of auxiliary forces, such as the fire brigade and the Red Cross, for example. There are also fewer reports on the training of people’s militia at the village level, although it still occurs in Kachin State. The training of militias was an essential part of the doctrine and was common from 2006 to 2010. All this suggests that the people’s war doctrine is still the official position but at the same time a transition is in process.

4. International engagement is a priority

For the Tatmadaw, achieving international recognition and transforming its image is a top priority. Since 2011, the Tatmadaw has participated in and conducted numerous workshops with international organisations on topics including human rights, underage recruitment, SSR, and disarmament, demobilisation and reintegration (DDR).

Under the banner of supporting the peace process, international organisations have created opportunities for Tatmadaw officers to undertake international study trips to Europe and post-conflict states. This gave the Tatmadaw the chance to engage with Western countries for the first time since 1988. The recent visit of the commander-in-chief to Europe and the official visit of General Mikhail Kostarakos, chairman of the European Union Military Committee (EUMC), were milestones in this relationship. 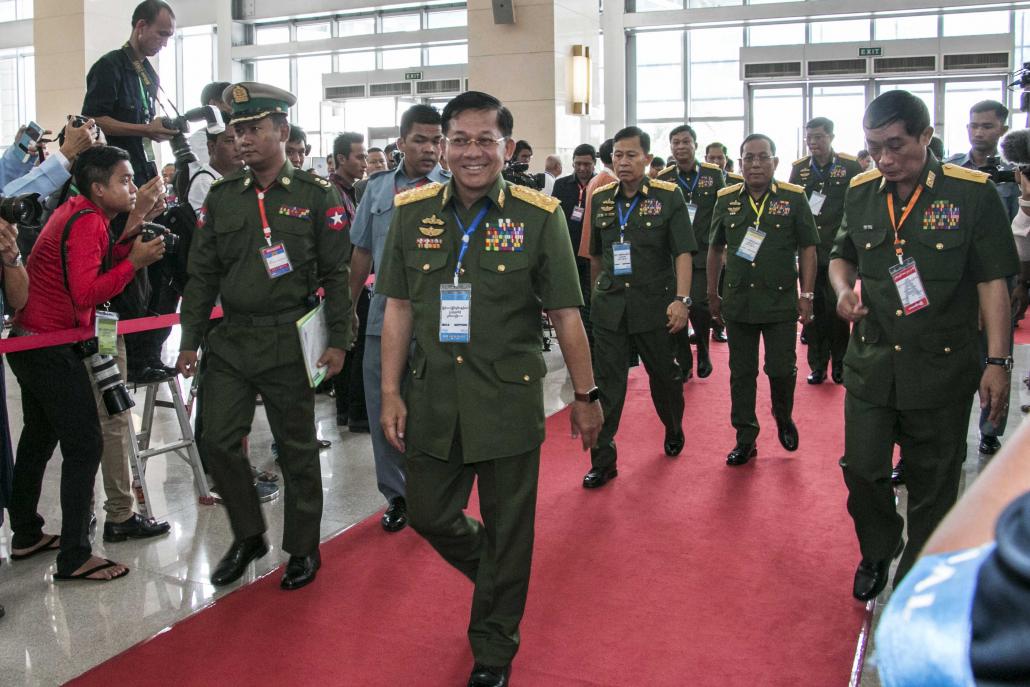 Reports of human rights abuses in conflict areas continue to dog the Tatmadaw, but there has undoubtedly been some progress on human rights. The Tatmadaw has collaborated with the International Labour Organization to address the issue of underage recruitment. Although not yet fully eradicated, this collaboration has in turn paved the way for the Tatmadaw to partake in United Nations Peacekeeping missions.

The Australian government and Defence Force is taking the bold steps to bring this about by providing the Tatmadaw with training in peacekeeping. Since 2014, Canberra has supported numerous workshops and trainings for the Tatmadaw on humanitarian assistance and disaster relief, as well as international laws. At the inaugural Australia-Myanmar defence cooperation talks in March, they agreed to strengthen engagement between the armed forces of the two countries.

While the Tatmadaw is seeking to transform into a Standard Army, its national goals and national defence policy remain unchanged. The focuses of the transformation process are international engagement, modernisation and defence capability. It will remain heavily involved in national politics. But recognition from the international community as a result of the Standard Army transformation may serve to legitimise the role of the Tatmadaw in politics. This will create a unique form of civil-military relationship.

The National Defence and Security Council (NDSC), which under the 2008 Constitution is the highest civil-military coordinating body, has not yet convened under the present administration. Coordination between the Tatmadaw and government has been undertaken directly by State Counsellor Daw Aung San Suu Kyi and Senior General Min Aung Hlaing, supplemented by the newly appointed National Security Adviser, U Thaung Tun. The participation of the NSA in the Shangri-La Dialogue in Singapore last month was significant – the first time that a non-military official had represented Myanmar at a security-focused dialogue.

Although the government has made structural adjustments to the civil-military coordination mechanism, there is no sign of it attempting to challenge the position granted to the Tatmadaw by the 2008 Constitution.

The transition to a Standard Army requires assessments of the capability of security forces, internal and external threats, and military doctrines. It will require a defence review process, with net assessments and strategic projections. This review process may allow for independent actors, such as think-tanks, to contribute to security sector development, while also creating a new dynamic in the civil-military relationship and the strengthening of the defence capabilities of the state.