Myanmar has been familiar with conflict since it gained independence from the British in 1948, but the communal violence that has hit the country in recent years has taken on a darker, more sinister tone.

FROM 2012 to 2014, Myanmar suffered violence between different communities, most of it involving Buddhists attacking Muslims. It ranged from localised, fleeting, inter-group violence, to large scale, apparently well-organised, state-supported killing and destruction of property of a targeted group, running over a number of days.

The most serious and protracted violence, which left hundreds, perhaps thousands, of people dead and over a hundred thousand displaced, was in Rakhine State. There, its objects were people variously identified as Rohingya, or Bengali Muslims. Large-scale anti-Muslim violence followed in Mandalay Region and Shan State; smaller incidents, some isolated, others sequential, occurred elsewhere.

Collective violence is a feature of uncertain times. In Myanmar too – and before it, Burma – it has tended to occur amid rapid political and economic change. As in other religiously, culturally and linguistically heterogeneous countries where a politically oppressive state loosens a highly coercive grip, people there have found themselves wanting for genuinely democratic institutions to express and manage conflict. Mundane and seemingly apolitical events instead have been converted into moments of short-lived but intense violence in which people living in proximity have divided sharply into groups, with one attacking the other. 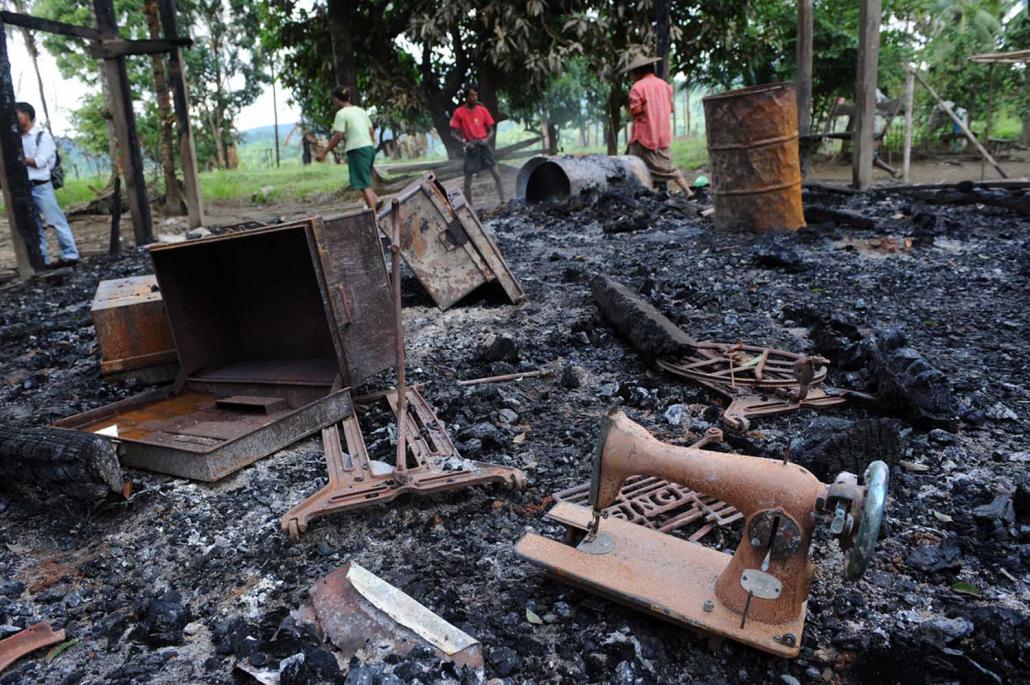 The charred remains of a building burnt down in the violence that engulfed Meiktila in 2013. (Steve Tickner | Frontier)

What is it about the violence in this period of 2012 to 2014 specifically that made it “communal”? Communal violence consists in overtly performed, episodic, recurrent, sporadic, direct physical hostility between self-defining and mutually identifiable ascriptive communities. It is realised through repeated public expressions that the fundamental common interests of the members of one community are irreconcilable with those of another, giving rise to a shared belief that the other community poses an existential threat.

Communal violence excludes the violence accompanying all civil wars and rebellions fought in Myanmar since political independence from Britain in 1948 up to the present, including those in the name of ethnicity, for which the country is well known. The parties to those wars contest state sovereignty. Communal violence is distinguished not only by the absence of any such contestation but also by the firm insistence of a party or parties to the violence on the exercise of sovereignty. In the immediacy of the violence, one or more affected communities demand security, calling for police or military intervention, and, tacitly, for the state to intervene on one side or the other.

The nomenclature of communal violence does not denote a condition in which evenly matched groups engage in tit-for-tat bloodshed for which each bear equal responsibility. As in India, where communal violence is recurrent, the violence in Myanmar of 2012 to 2014 was overwhelmingly one-sided. Buddhists contrived to commit most of the violence and on every occasion their targets were identified as Muslims, who officially make up approximately 4.3 percent of the national population. A feature of communal violence that Myanmar shares with India, then, is the relative lack of capacity of the targeted community to retaliate, and the high degree of certainty that members of the dominant community will enjoy impunity for their actions.

How are beliefs about communal violence formed, justified and institutionalised? In short, the answer is contingent on how people interact and communicate; on how some present opinions and interpret events to have others come to share their beliefs about what happened and why. As in other sites of communal violence, politically driven “tactical” media online and in print played an especially significant part in how communal violence was produced and reproduced in Myanmar from 2012 to 2014.

One example of an outlet specifically established to interpret and defend an anti-Muslim communalist position is Ma Ba Tha’s Aungzeyadu. This weekly news-style periodical, which takes its title from the pre-regal name of the last empire-building Burmese king, Alaungpaya, reproduces sermons of leading anti-Muslim monks, and features articles advocating legal and policy changes to protect Buddhism.

It also publishes racist tracts directed against “the Bengali”, reports of Islamic terrorism and anti-Muslim protests and movements around the world, commentaries welcoming the flight of Rohingya by boat, and editorials condemning international organisations for bias, and labelling as traitors local writers who oppose the communalist cause. Some of its columnists go on to republish their writings in collected volumes.

Blatantly communalist propaganda of this sort does not appear to enjoy wide circulation through newsstands and bookstores, although the fact that it can be distributed openly is alarming. Of greater concern is that its influence has been felt through more mainstream, popular outlets, whose writers have moderated the propagandists’ language, but concurred with many of their premises. 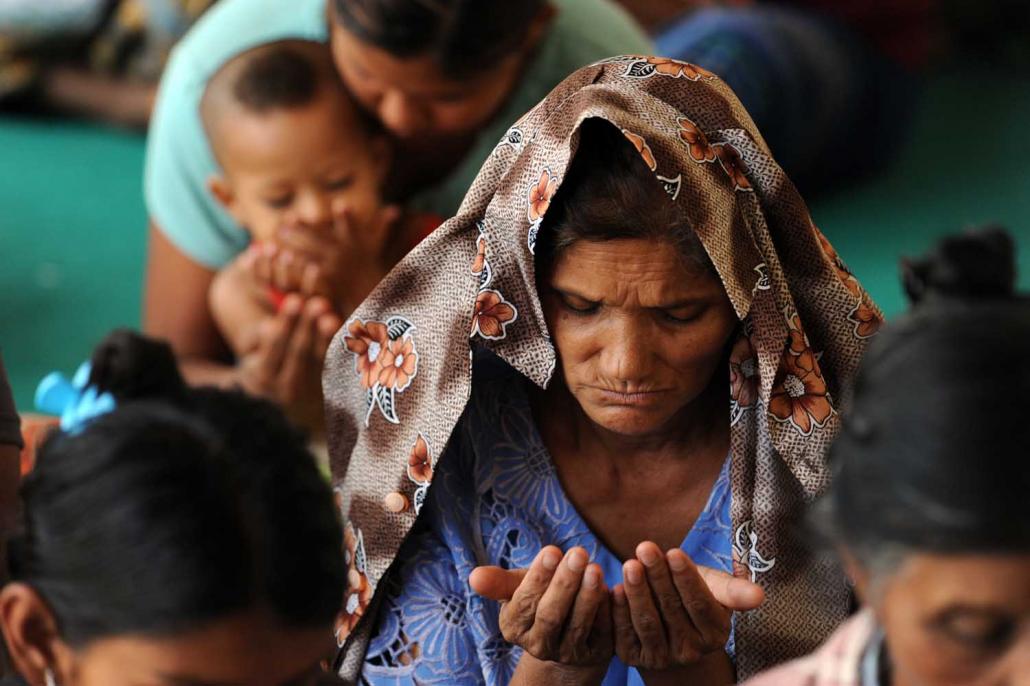 After the violence in 2012, news articles in popular periodicals like Weekly Eleven, The Voice and 7-Day News consistently featured sympathetic portrayals of displaced Rakhine Buddhist populations. Photographs of Buddhist women, children and the elderly escaping to the refuge of monasteries were juxtaposed with a handful of images of marauding Muslim mobs armed with sticks, confronting riot police.

Laudatory accounts of local welfare groups’ efforts to bring aid to Buddhists contrasted with the disapproval of international groups for providing the same kinds of support to Muslims. Only when violence spread to other parts of Myanmar in 2013 did some outlets shift their interpretations, expressing scepticism that the violence was spontaneous, speculating about who was responsible, and what they stood to gain.

Leaders of civil society groups re-emerging after decades of political struggle against dictatorship have also taken on roles as “specialists” in violence interpretation – as Paul Brass described people playing these roles in India. Few have challenged the idea of communal identity as the basis for political relations. Some have spoken in support of greater border controls to prevent the perceived influx of alleged illegals, and emphasised that citizens’ rights must be put ahead of human rights.

But civil society leaders are by no means the only people to offer their specialist interpretations. The former head of military intelligence, U Khin Nyunt, has published a book with his reading of recent events and details of the role he played in anti-Muslim operations in the 1970s.

That an ex-spymaster is sufficiently confident that his views on these matters are consonant with those of some of the very people whom in earlier years he had imprisoned for political dissidence as to publish them is indicative of the anti-Muslim consensus among non-Muslim interpretation specialists in Myanmar. Despite the disagreements of journalists, civil society activists, former army officers and insurgents on pretty much every other politically salient topic, views on communal violence have tended to converge.

At the same time, the views of Burmese have diverged sharply from those of international partners working in Myanmar. So too have they deviated from groups monitoring the country from abroad, not least of all those making a case for crimes against humanity and genocide.

Interpretation specialists communicating to audiences in Myanmar have aggressively rebutted these allegations, blaming the international community for deliberately or ignorantly misinterpreting events. Some have alleged that Muslim organisations, countries and advocacy groups have been conspiring to discredit Myanmar in international forums and the media. Like aggressor communities elsewhere, they have positioned themselves as victims rather than perpetrators, as defenders of an embattled religion or culture under attack from others representing an implicitly or explicitly inferior tradition.

While interpretation specialists have dominated reportage on the communal violence, the people who actually did the killing and burning have remained obscured. Rarely have specific individuals been praised or condemned for leading an attack on a mosque or murdering its occupants.

This awkward lack of specificity and seeming absence of agency after the fact of violence contributes to its sense of menace. Spaces that cannot be occupied by named and known aggressors instead are populated with shadowy, behind-the-scenes types, provocateurs or string-pullers, and unnamed and unidentified policemen who either turn a blind eye or participate in killings.

A lack of specificity about perpetrators and their motives is among the reasons that it remains difficult, despite the many advances in social scientific research design of recent years, to develop persuasive causal theories and explanations about communal violence.

Nevertheless, whether researchers adopt modes of inquiry that are oriented towards the causes or constitution of violence, we are all forced, in one way or another, to address questions about what did or did not happen, about the factual truth or falsity of reported events – and in so doing, to engage in informed and rigorous critique of rival interpretations.

This article was first published by New Mandala, and is extracted and adapted from “Interpreting Communal Violence in Myanmar”, the introduction to a special issue of the Journal of Contemporary Asia (vol 47, no 3, 2017, 335-352).