NAY PYI TAW — Myanmar’s stateless Rohingya should be given the right to citizenship after generations living in the country, UN chief Ban Ki-Moon said on Tuesday.

Many from the million-strong Muslim minority are denied citizenship, voting and work rights and reviled as imposters in overwhelmingly Buddhist Myanmar.

More than 120,000 have been displaced, many to squalid displacement camps in western Rakhine state, after fleeing violence stirred by Buddhist nationalists in 2012.

Thousands have fled to other Southeast Asian countries on rickety boats in search of better lives, only to drown or fall victim to human traffickers.

In June, the UN said the Rohingya suffered entrenched discrimination so deep it may amount to crimes against humanity.

“This is not just a question of the Rohingya community’s right to self-identify,” Ban told a press conference alongside Myanmar’s de facto leader Daw Aung San Suu Kyi.

“People who have been living for generations in this country should enjoy the same legal status and citizenship as everyone else.”

His comments come as Myanmar’s new civilian government is seeking to tackle the seemingly intractable issue that has dogged Nobel laureate Suu Kyi for years.

Even the word Rohingya has become loaded — with Buddhist nationalists having staged protests across the country against using the term. They instead label the group “Bengalis” and cast them as illegal immigrants from neighbouring Bangladesh.

The veteran democracy activist has come under fire from international rights groups for failing to address the plight of the Rohingya, as she seeks to avoid stoking further unrest over the sensitive issue.

Last week, the government announced it would set up an advisory panel chaired by former UN secretary general Kofi Annan to find “lasting solutions to the complex and delicate issues in the Rakhine State”.

His appointment has triggered a backlash from nationalists, including the local Arakan National Party, who denounced what they saw as foreign meddling.

Ban said he would support his predecessor’s work in Rakhine and work with Myanmar’s central authorities to tackle the Rohingya issue.

“The situation is complex (in Rakhine) and the government has assured me of their commitment to address the roots of the problem,” he said.

“All of Myanmar’s people, of every ethnicity and background, should be able to live in equality and harmony side by side with their neighbours.”

Ban’s speech comes on the eve of the opening of the new government’s flagship peace conference to broker a deal with the country’s warring ethnic minorities.

The five-day gathering is Suu Kyi’s first big drive to end multiple insurgencies that have raged in Myanmar’s borderlands since independence in 1948.

Organisers have been pushing for a unilateral ceasefire, but hopes have been shattered by renewed outbreaks of fighting, according to negotiators. 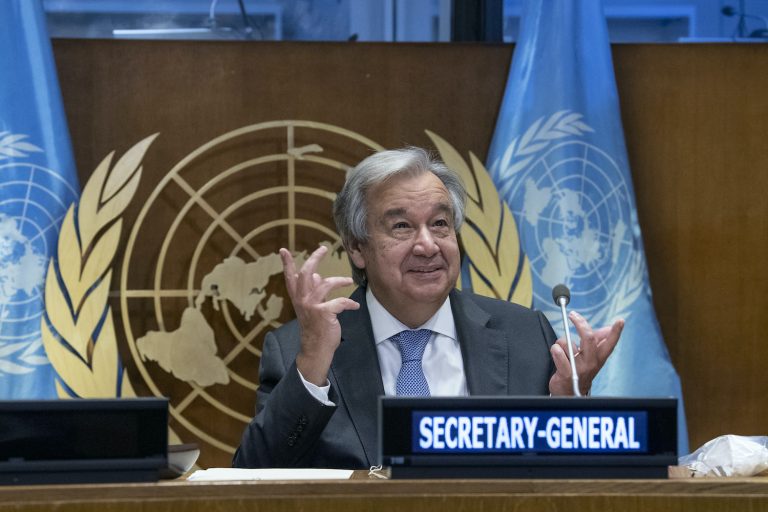 By AFP UN Secretary General Antonio Guterres raised “great concern” over the recent developments, his spokesperson said. More than a dozen embassies, including the US.
BY AFP