Towering up: Next battle looms in mobile connectivity

Soaring mobile phone use has driven a boom in installing rooftop transmission towers, and some companies are striving to ensure that they intrude on urban skylines as little as possible.

As national manager for telecom infrastructure company Edotco, he would prefer that no one pays attention to the towers that punctuate Yangon’s skyline, some perched on rooftops like steel gargoyles, others looming over the horizon like rocket ships.

But from a rooftop construction site in Yankin, Kittle sees little else.

“That one looks like an Ooredoo,” he said, of a small, silver spike on a roof a few blocks away.

To the south, a vaguely rectangular shape all but invisible in the smog. “That one over there looks like one of MPT’s.”

The tower Kittle has climbed to the roof to inspect is a clean, silver tripod, roughly the height of a palm tree. It’s on a roof across the street from a high-rise building site.

“When that is finished,” he said, motioning to the high-rise, “this tower is going to have a lot of data traffic.”

Telenor requested the rooftop tower, but the telco company will not own it. Rather, Edotco, a Malaysia-based firm that acquired the Myanmar Tower Company (a partnership between Digicel and Yoma Strategic) in 2015, will lease antenna space to operators, as if the tower were a condo or office building. 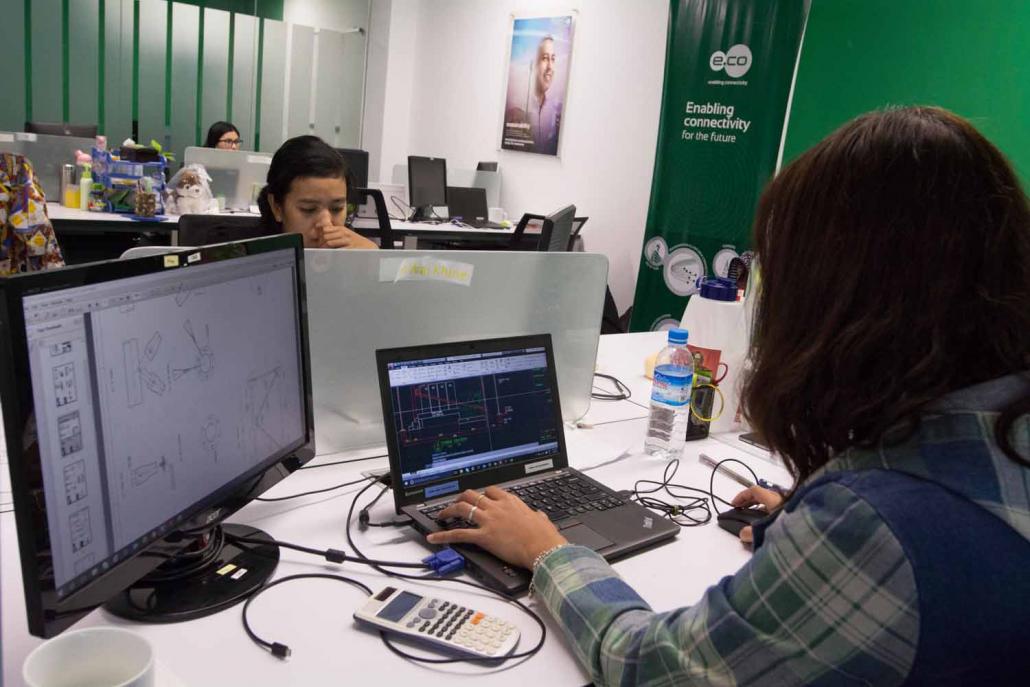 Fortunately for Myanmar’s telecom infrastructure companies, the market for rooftop real estate is booming. A fourth telco is due to launch this year, and Telenor and Ooredoo are in the midst of a major urban rollout. Demand for towers is the highest it has been in years.

Telenor spokesperson Mr Joachim Rajaram said the telco has never stopped expanding in the countryside, and has more than 7,200 towers serving more than 19 million customers throughout Myanmar. But as the growth of new users slows, it is refocusing on urban areas.

“We are strengthening our network capacity in cities and towns across the country where data adoption continues to grow,” Rajaram said.

This means hundreds of new towers – everything from large, standalone “greenfield” structures (to use an industry term), to small towers erected on existing infrastructure. As they scramble to claim territory, tower builders are staking out sites on rooftops, billboards and even light poles.

“Network transmission in layman terms can be viewed as plumbing pipes,” said Mr Ricky Steyn, Edotco’s director of engineering. “The water can be compared to data and the pipes to bandwidths. The bigger the pipes the more water you can direct through; thus the bigger the bandwidth the more data you can send through your network.”

He said the focus on urban areas was not surprising. “Data traffic is increasing dramatically in urban areas: there is a capacity issue and black spots are forming, resulting in the need for more towers.” 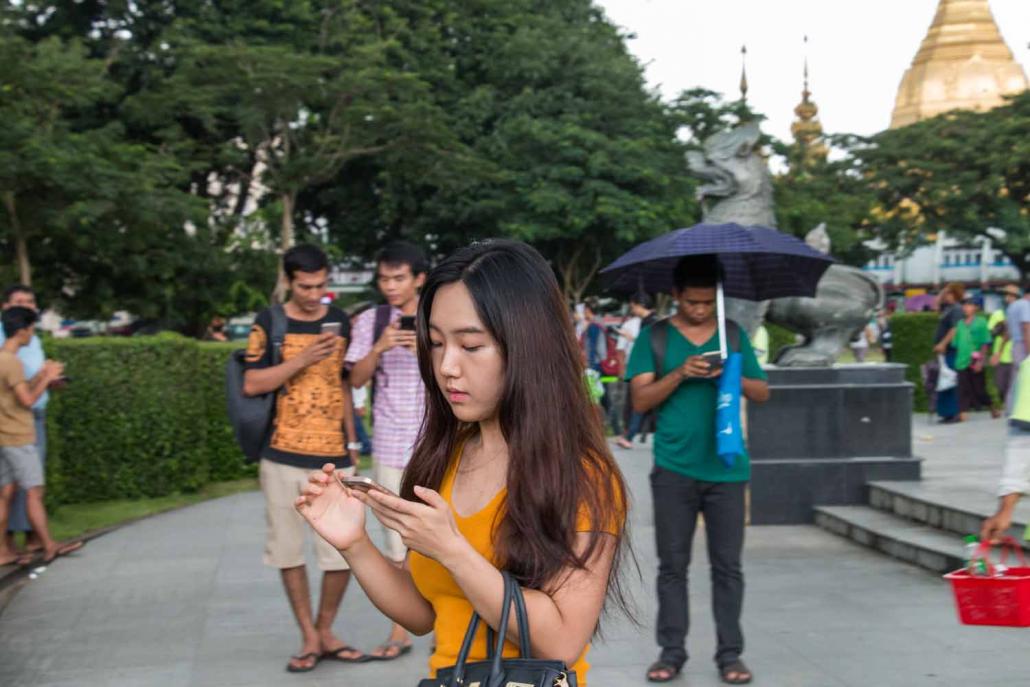 Phone use has skyrocketed since new operators launched in 2014, with more than 50 million active SIMs and a fourth operator poised to enter the market. (Nyein Su Wai Kyaw Soe / Frontier)

Most of the towers erected in Yangon this year will be at what Steyn calls “filler” towers, which fill in the coverage gaps between the larger “macro” towers. From a construction perspective, these small urban towers are far less costly than the rural installations, which are usually much larger and more difficult to supply.

In some remote areas, building a tower requires floating steel beams down rivers on rafts or hauling them through the jungle with elephants.

Yet in Yangon, politics can create a much bigger challenge. Telecom companies usually request the general location for a tower but leave it to tower companies to find and acquire the exact site.

In neighbourhoods crammed with colonial-era buildings, where the companies have to deal with complex ordinances, township officials and stubborn landlords, building anything can be a nightmare of red tape.

It usually costs between US$400 and $500 per month to rent a rooftop, which is usually paid to landlords. Sometimes a resident on the top floor will try to claim the roof for themselves, or neighbouring landlords, feeling slighted, might threaten to complain to township officials unless they get a cut of the rent.

Working with local government is another challenge.

“We have the capacity to build enough towers to cover the data demand … but we require local government approvals,” Steyn said.

Not only does a tower require a permit, he said, but a surprising number of buildings, especially downtown, are owned by the government or the military, and their concerns may have nothing to do with money. Some areas, such as People’s Park, are completely off-limits, partly for environmental protection and aesthetic reasons. An estimated 70 percent of phone users have a smartphone, with data use above 50 percent. Just four years ago, mobile phone penetration was estimated at less than 10 percent of the population. (Nyein Su Wai Kyaw Soe / Frontier)

Thus, building telecom infrastructure can be a tug-of-war between meeting demand from operators and winning over a city that would rather not have its skyline marred by a dystopian mass of bristly steel.

The problem is not unique to Yangon. One of the hottest topics at TowerXchange, an international conference series for the industry, is how to make tower infrastructure less intrusive. Designers swap ideas on how to hide an antenna inside a fake cactus or integrate equipment into the awning of a bus stop.

Yangon is far from the cutting edge of telecom infrastructure, but tower companies are busy finding ways to hide their work. Yangon already has a few sites outfitted with false tree branches to help them blend in, but Edotco is currently building what it claims to be Yangon’s first perfectly camouflaged tower atop Star City, a residential development in Thanlyin Township.

From the ground, the tower will look exactly like a piece of the building.

Star City did not want an unsightly tower on its roof, he explained, but its high-rise buildings would have blocked the signal from a site on the ground.

“We were very pleased when Star City agreed to our camouflage rooftop tower proposal. That itself is really an achievement,” Steyn said. “The estate management want to have service available to their residents, but they wanted to keep the modern design of the estate intact.”

Steyn and Kittle proudly detailed the specialised fibreglass that will not block radio signals, remote monitoring system and lithium-ion batteries that reduce operating and maintenance costs – all firsts for Myanmar and badges of honour in the industry.

For the rest of us, it will look like a chimney with a glowing building number mounted on the side. And if all goes according to plan, we also won’t notice the antennae on the streetlights in Mandalay or hidden behind a billboard at Junction Square.