A new report has detailed how movement restrictions are devastating the lives of Rohingya in Rakhine and helping to maintain their enforced segregation from the state’s other ethnic groups.

On May 25, the government published a report in The Global New Light of Myanmar that detailed progress made in Rakhine State implementing recommendations of the Rakhine State Advisory Commission.

One of the items that drew my particular attention showed the discrepancy in access to tertiary health care between Muslims and other ethnicities. Of 26,860 patients treated between September and December last year at Sittwe General Hospital, the state’s only tertiary medical institution, only 814 – or just 3 percent – were Muslim.

Since the flight of hundreds of thousands Rohingya to Bangladesh in 2017, Muslims (Rohingya and Kaman) probably comprise between 20pc and 25pc of the state’s population. This puts the fact that they accounted for only 3pc of admissions to Sittwe General Hospital in a stark light.

This new information is welcome because acknowledging such discrepancies should spark efforts to understand and address them. A new report does just that.

The report, Freedom of Movement in Rakhine State, by the Independent Rakhine Initiative, an evidence-based advocacy project, sheds light on reasons for this particular discrepancy, and much more. The study was conducted between March 2019 and January 2020 and used a qualitative methodology consisting of a literature review and interviews and focus group discussions with 211 individuals. It builds on an evidence base of 1,056 interviews conducted for IRI’s earlier reports on access to health, education and livelihoods.

It shows that perhaps more than any other human right, freedom of movement does not stand on its own. It “underpins the ability of individuals to live free and dignified lives, and is instrumental for the enjoyment of other rights, including access to health care, education and livelihoods”.

IRI researched one of the key recommendations of the final report in August 2017 of the Rakhine State Advisory Commission, led by the late Mr Kofi Annan: to undertake a mapping exercise to identify all existing restrictions on movement in Rakhine affecting the state’s diverse ethnic communities and to develop a roadmap for the lifting of restrictions.

The report is a pretty devastating read, not least because it shows the effects of newly imposed movement restrictions on all communities since the intensification of fighting between the military and the Arakan Army in late 2018. It also shows that enforced ethnic segregation, or apartheid, remains a reality for the Rohingya population.

Wide-ranging restrictions of movement are a critical component of enforced segregation.

IRI’s key finding is that movement restrictions are pervasive and affect every community. It concludes that a limited number of these restrictions may be justified because of the security situation but that most are arbitrary and necessitate revision and removal.

The report focuses on all ethnic communities with particular attention to the Rakhine, Rohingya, Kaman, Hindu and Maramagyi. Although all suffer from marginalisation and exclusion, it finds that freedom of movement restrictions are central to the continued persecution of the Rohingya, who clearly continue to bear the brunt of policies and practices constituting enforced ethnic segregation.

The report is not only one of the most important recent research projects on Rakhine, it also delivers a comprehensive roadmap of recommendations. It addresses freedom of movement as a cross-cutting issue that also affects access to other rights. In doing so IRI has formulated recommendations that aim to implement many of the points made in the Annan commission’s report.

The link that Myanmar continues to make between citizenship documentation and freedom of movement is particularly problematic. Under international law all people have the right to freedom of movement, regardless of citizenship status. However, since the 1980s the Rohingya have been victimised by gradual identity card confiscation, leading to the final withdrawal of temporary identity cards in 2015. The report finds that “the government has systematically denied an entire community access to documentation and then barred them from moving freely because they lack documentation”.

Even Rohingya who ultimately received citizenship find that it is not a guarantee of freedom of movement. The study shows that other factors are also in play, such as membership of an unrecognised group, identification with minority religious beliefs, speaking a minority language and having a darker complexion. The more of these conditions that are met, the more challenging it is to travel. Although Rohingya face the greatest difficulties, Maramagyi and Kaman are also likely to face movement barriers.

Freedom of movement restrictions can be characterised as either formal or informal. Formal restrictions are those imposed by the state, such as documentation requirements, movement permissions, curfews and requirements for security escorts. Informal restrictions are not formally imposed but are the result of broader socio-political factors, such as intercommunal policing, a climate of impunity for those who solicit bribes and the failure of the government to ensure a secure environment.

Financial cost serves as a cross-cutting barrier between formal and informal restrictions. The cost of movement itself is a major determinant of the ability to travel, particularly for the Rohingya. To illustrate this the report contains detailed cost calculations. One example is the difference in the cost of travelling from Buthidaung to Yangon for a Rohingya without recognised documentation and a non-Rohingya. For a non-Rohingya the cost is estimated at US$66. For a Rohingya it is $896 – 13 times higher, and for most a prohibitive amount.

The list of formal and informal charges that Rohingya travelling to Yangon have to pay is long: a village departure certificate, security clearance form, informal payments at multiple checkpoints, a so-called Form 4 for inter-township and inter-state travel, transportation, compulsory use of security guards, and payments to officials in Yangon.

The high cost of travel is one of the reasons why so few Muslims are admitted to Sittwe General Hospital. Many cannot afford the cost of travelling there, and getting money and travel permits as well as arranging for a paid security escort takes too much time, particularly in a medical emergency. This can result in preventable complications and even deaths.

Fighting between the military and the AA has made access to livelihoods more difficult for all ethnicities. Many cannot move far from their villages and cannot access their land or go fishing. Landmines and improvised explosive devices, or IEDs, are serious threats. For the Rohingya, movement restrictions also make it difficult to flee when their villages come under attack. The problems for all communities are compounded by dwindling job opportunities. For many households, food security is a real issue.

The state’s education sector is a patchwork of formal and informal arrangements that performs poorly compared to the national average. Although children of diverse ethnicities used to attend school together, lack of freedom of movement and institutionalised segregation mean that it is now difficult for Rohingya and Kaman children to obtain an education. Since 2012 access to tertiary education is restricted for all Muslims regardless of their documentation status.

The IRI report deserves to be widely read. Not all of its information is new, but it is the first wide-ranging report on Rakhine’s lack of freedom of movement and its implications. The draconian restrictions stand in the way of progress for the state as a whole. The longer they are in place, the more difficult it will be to remove them because they breed distrust between communities. A broader vision for a positive future based on ethnic diversity as a strength is badly needed.

As the Annan report states: “The question should not be whether Rakhines and Muslims will live together, but rather how they will live together. Reintegration, not segregation, is the best path to long-term stability and development in Rakhine State.”

The Roadmap for Lifting Restrictions on Freedom of Movement that accompanies the report is a valuable resource. It addresses freedom of movement as a cross-cutting issue by providing recommendations that not only address freedom of movement, but also the environment of discrimination that enables restrictions.

In a step-by-step approach it provides a comprehensive set of immediate, short-, medium- and long-term recommendations. They are addressed to the government of Myanmar but also include suggestions for national and international agencies engaged in development, humanitarian and peacebuilding work. They have the responsibility to ensure not only that their programmes do no harm, but also that they are actively working towards ensuring the respect for and protection of every community’s rights.

Quite a few recommendations could be implemented immediately and doing so would signal that Myanmar is serious about addressing the impact of movement restrictions on all communities. The fighting in Rakhine is no excuse for delaying action. A military solution for Rakhine’s problems is not in sight. These problems can only be resolved through dialogue with and among all its communities in a spirit that recognises diversity, non-discrimination, equality and inclusion as the way forward.

Laetitia van den Assum is an independent diplomatic expert and was a member of the Advisory Commission on Rakhine State chaired by Kofi Annan. She is also a former ambassador of The Netherlands. 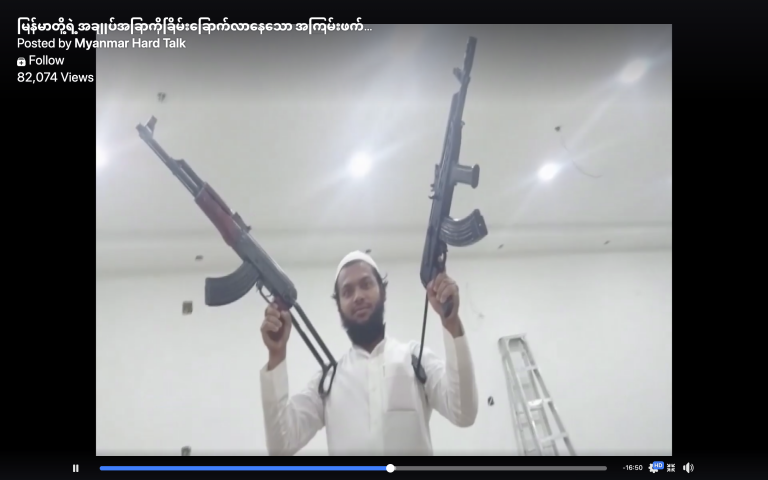