Time honours Reuters journalists along with other 'guardians' of truth

NEW YORK — Imprisoned Reuters journalists Ko Wa Lone and Ko Kyaw Soe Oo were on Tuesday announced as Time magazine’s “Person of the Year”, an honour they shared with other targeted journalists recognised as “guardians” of the truth.

Among those named with the Myanmar journalists were Jamal Khashoggi, who was murdered in October at his country’s Istanbul consulate, Philippine journalist Maria Ressa, and the workforce of the Capital Gazette in the US city of Annapolis, including five staff members killed in a June shooting.

“As we looked at the choices it became clear that the manipulation and abuse of truth is really the common thread in so many of this year’s major stories, from Russia to Riyadh to Silicon Valley,” Time editor-in-chief Edward Felsenthal said.

“So we chose to highlight four individuals and one group who have taken great risks in pursuit of greater truth, starting with Jamal Khashoggi.”

Time, which has awarded the “Person of the Year” title annually since 1927, published four different magazine covers for this week’s edition, each one spotlighting different honorees. 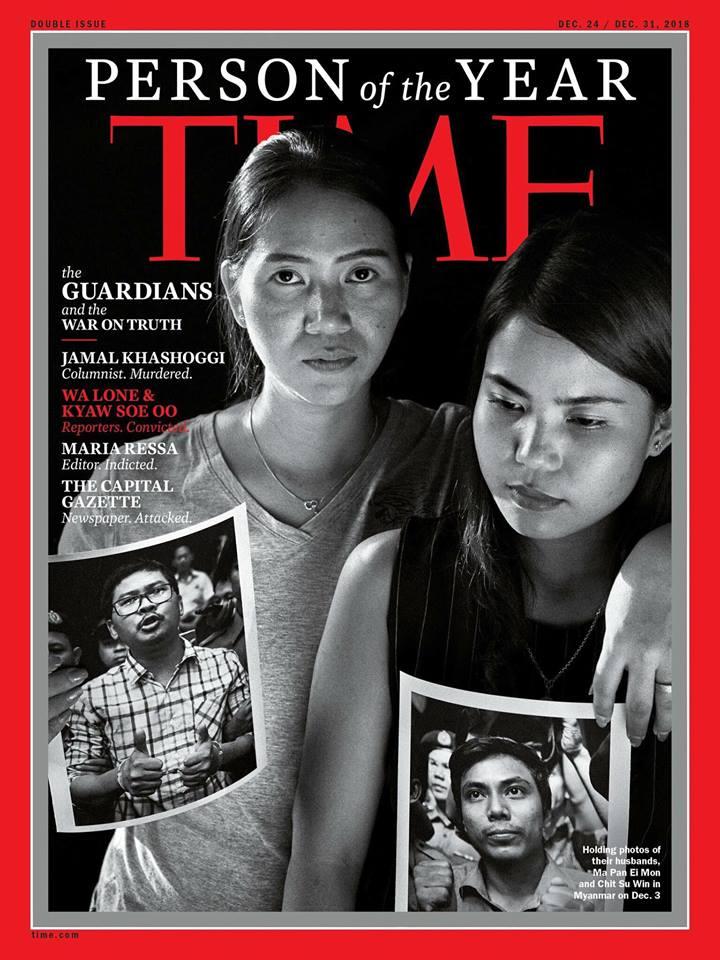 It is the first time someone has been chosen posthumously for the prestigious cover.

Explaining the decision to honor dissident journalist Khashoggi, who was a US resident and Washington Post columnist, Felsenthal said it was “very rare that a person’s influence grows so immensely in death.”

“His murder has prompted a global reassessment of the Saudi crown prince and a really long overdue look at the devastating war in Yemen,” he added.

The CIA has concluded with “medium-to-high confidence” that Crown Prince Mohammed bin Salman probably ordered Khashoggi’s October 2 assassination, according to US media reports.

Prince Mohammed is also accused of contributing to the world’s worst humanitarian crisis in impoverished Yemen, where a Saudi-led coalition has been fighting a war against Huthi rebels.

They have been imprisoned for nearly a year, and were convicted under the Official Secrets Act in September. A court will hear their appeal later this month.

Marie Ressa, meanwhile, is CEO of Rappler, a Philippine news site hit by a string of government efforts to shut it down over its critical tone of President Rodrigo Duterte.

She faces a charge – which she has dismissed as “manufactured” – that Rappler provided false information to tax authorities, and risks up to 10 years behind bars.

The staff of the Capital Gazette in Annapolis, Maryland, also share this year’s title. Their newsroom was attacked by gunman Jarrod Ramos in June, leaving four journalists and a sales assistant dead.

US President Donald Trump, the 2016 “Person of the Year”, was the bookmakers’ favourite this year but in the end was runner-up.

Minutes after the unveiling, he launched the latest of his regular attacks on the media via Twitter, accusing the “Fake News” of misreporting his struggle to fill the key position of White House chief of staff.

US special counsel Robert Mueller, who is investigating possible collusion between Russia and Trump’s 2016 election campaign, was ranked third.