Time for long overdue reforms to the human rights commission

The government could undertake four reforms immediately to enhance the Myanmar National Human Rights Commission’s ability to protect and promote the rights of all people in Myanmar.

THE National League for Democracy government should use the final year of its term to carry out urgent reforms that would make the Myanmar National Human Rights Commission more effective. This would help promote respect for human rights throughout Myanmar and signal an intention to protect against violations.

Eight years after its establishment, the MNHRC remains generally ineffective, fails to meet international standards on national human rights institutions and is taken seriously by few people in society. This is largely because it lacks independence from government and has done little to address some of the most serious human rights violations in the country, particularly those involving the military. While current commissioners have taken modest steps towards reform, including through a publicly available self-assessment and a strategic plan, more robust action is required to make the MNHRC effective.

In a new legal briefing note, the International Commission of Jurists has identified four reforms that could be implemented immediately to enhance the MNHRC’s ability to protect and promote the human rights of all people in Myanmar. As a non-government organisation of human rights lawyers, the ICJ works with national human rights institutions globally, including in Myanmar. Drawing upon this experience, and on assessments by the MNHRC itself, civil society organisations and the Global Alliance of National Human Rights Institutions, the note describes how the MNHRC could better align itself with the United Nations Paris Principles, which sets standards for national human rights institutions. The MNHRC is currently graded B by the Global Alliance of National Human Rights Institutions, meaning it does not fully comply with the Paris Principles.

First, the President of Myanmar and the Commissioner Selection Board should appoint commissioners who, unlike several of the MNHRC’s incumbents, are properly qualified to promote and protect human rights. This can and should be done promptly, because the commission currently operates with only seven members, the minimum required by the 2014 MNHRC Law. Commissioners should be selected based on human rights expertise, and the overall composition ought to reflect the ethnic, religious, regional, gender and sexual diversity of society. This would boost public trust in the institution among Myanmar’s myriad minority groups. The selection process should also be undertaken transparently and with adequate consultation.

Second, the NLD-dominated Union Parliament should amend the 2014 MNHRC Law to strengthen the commission’s mandate and independence, while improving the commissioner selection process. One of several provisions requiring an overhaul is section 37, which effectively precludes the MNHRC from inquiring into potential human rights violations that are already the subject of a court proceeding. The MNHRC must be empowered to monitor such cases in order to ensure that prosecutions are carried out in a manner consistent with human rights. For instance, in a criminal case, they should be able to assess whether the defendant’s fair trial rights have been violated.

Third, as part of the current effort to amend the 2008 Constitution, the parliamentary Constitutional Amendment Committee should propose new provisions in an amended constitution that would accord the MNHRC constitutional status. The current MNHRC was created under ordinary enabling legislation, meaning it can be altered easily by subsequent law or even decree. Granting constitutional status to the MNHRC would be wise given Myanmar’s political transition: The national human rights institutions of East Timor and the Philippines – which, unlike Myanmar, have “A” ratings from the Global Alliance of National Human Rights Institutions – were established by their respective constitutions when these countries were transitioning to democracy. Constitutional protection would make it easier for the MNHRC to assert itself and preserve its independence, even against a volatile political situation.

While urgently needed, law reform alone will not boost the credibility and effectiveness of the MNHRC. An internal change in the mindset and approaches of its members is also required. Commissioners themselves should take a broad and active interpretation of their mandate, including by taking steps to address the most serious violations that amount to crimes under international law, on which to date they have been mostly silent.

These measures could be implemented immediately and simultaneously. Reform of the 2014 MNHRC Law and the constitution can and should be pursued concurrently, with legislative reform addressing present legal impediments to the commission’s work and constitutional reform according the MNHRC with constitutional status and greater financial independence. Meanwhile, commissioners that reflect a diversity of experience and identities should be appointed, and all members of the MNHRC should take a more active and broad interpretation of their mandate.

These reforms are long overdue and should be pursued without delay to better protect the human rights of all people in Myanmar, and to signal a genuine commitment towards establishing a democratic society based on the rule of law. 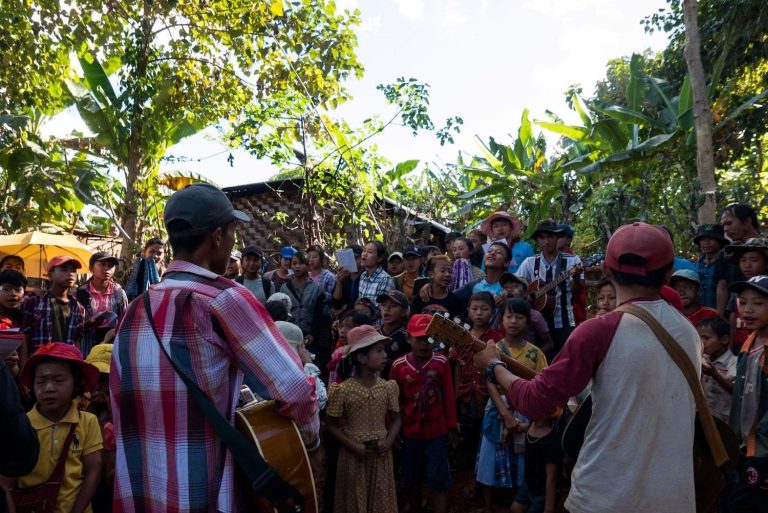 Villagers in the war-torn state are marking Christmas by praying for the memories of civilians killed by the military a year ago today, while survivors confront trauma.
BY Frontier