With more than 45 million followers, Buddhism is Myanmar’s most widely-observed religion. Here’s the basics.

The story begins in northeastern India in the 5th century BCE, when aristocrat-turned-ascetic Siddhārtha Gautama (pronounced “GO-tama” in Myanmar) meditated under a bodhi tree and found enlightenment.

According to Myanmar tradition, the newly-minted Gautama Buddha (Buddha means “awakened one”) met two merchants from the Ayeyarwady Valley and gave them eight hairs from his head, which King Okkalapa enshrined within what would become the Shwedagon Pagoda.

Other historians contend that Buddhism took quite a bit longer to reach the region, brought from southern India and Sri Lanka to Southeast Asia after the 3rd century CE.

Either way, today Myanmar is one of the most Buddhist countries in the world, accounting for 89 percent of the population with roughly 500,000 monks (plus around 75,000 nuns).

/></p><h3><strong>The basics</strong></h3><p>First, bear in mind that Buddhism emerged from Hinduism, which holds that people are caught in a cycle of death and reincarnation. Also, your actions (<em>karma</em>) can and do have consequences in present and future lives. </p><p>Gautama Buddha had set out to find an end to suffering, but he realised that there can be no permanent end to suffering because nothing is permanent. Since everything that happens causes something else to happen, things change by their very nature.</p><p>Thus, the only way to end suffering is to end desire, or attachment, and the only way to end desire was to end the sense of one’s self, which is only an illusion anyway. This state is called <em>Nirvana</em>, which literally means “blown out,” as with a candle flame. Those who achieve Nirvana simply end, leaving the cycle of death and rebirth behind.</p><p>A key takeaway is that in Buddhism there is no eternal soul. What you think of as “you” is only a temporary arrangement of elements (<em>skandas) </em>drifting like a dust cloud from one body to the next. </p><p>Next, there is nothing up there – God “the universe,” or whatever – counting good deeds, doling out punishments and deciding who gets to reach Nirvana. Everything that happens to you is simply a natural consequence of your own actions.</p><h2 class= 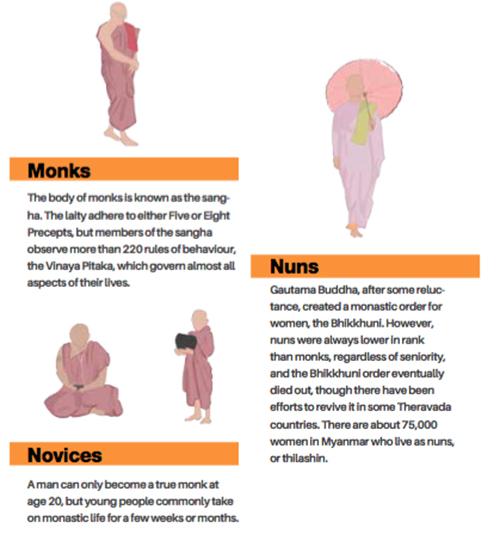 /></p><h3><strong>The way of the elders </strong></h3><p>The predominant form of Buddhism in Myanmar is Theravada Buddhism, prevalent in Thailand, Cambodia, Laos and Sri Lanka.</p><p>Theravada means “the way of the elders.” It insists that it adheres to the original Buddha’s teachings, and is far more conservative than the Mahayana Buddhism of countries like China, Tibet and Korea. </p><p>The centre of the Theravada Buddhist world is the community of monks, the <em>sangha</em>. Most—but not all—monks devote their lives to meditation and contemplation in the hope of achieving Nirvana.</p><p>Lay Buddhists pray and meditate at home shrines or local pagodas, but they mostly strive toward ultimate Nirvana by accumulating merit. The most basic way to gain merit is by adhering to the Five Precepts, which forbids killing, stealing, lying, sexual immorality or consuming any substance that “tends to cloud the mind.”</p><p>Many devout Myanmar Buddhists keep an additional three precepts, especially on full moon or a new moon day, which forbid singing and dancing, wearing cosmetics and sleeping in a luxurious bed.</p><p>These are the basics, though most Myanmar Buddhists seek merit through additional acts of kindness or religious devotion, such as giving to the poor or donating to monasteries. It is also common for young people to serve temporary stints as novice monks for a few weeks or months.</p><p>My friend Khin Maung Latt, an English teacher and devout Buddhist, discussed this with me at the Shwedagon Pagoda, where wealthy devotees have paid staggering sums for the privilege of erecting shrines and images on the holiest Buddhist site in Myanmar.</p><p>Yet more money spent does not necessarily equal more merit, a according to Khin Maung. “Even the Buddha said, ‘Some might give a tree, but their merit is worth a seed. Or some might give a seed, and your merit is worth a tree.’”</p><h2 class= 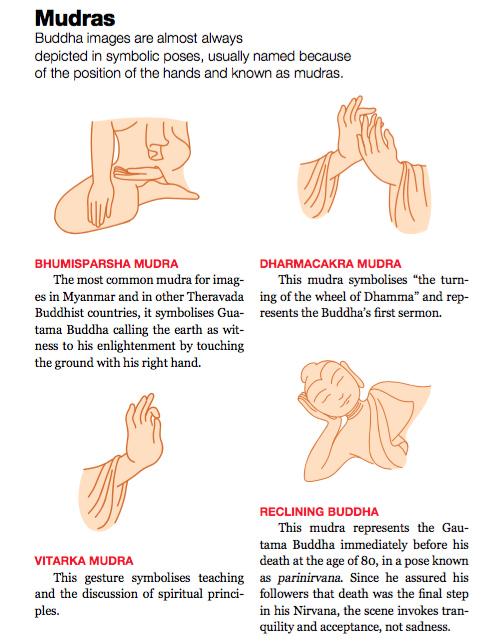 /></p><p>Good deeds are not lucky charms that automatically grant blessings or erase sins, although many Buddhists in Myanmar (and other countries) often think of them in that way. Some of the glittering pagodas that grace the towns and countryside were built by ageing Buddhists in an effort to undo a lifetime of sins.</p><p>They will indeed benefit from these lavish deeds, said one monk we spoke with, who had been in the sangha for 34 years, but they will also have to pay for the bad ones.</p><p>He explained that good deeds are not only about their literal results but also about creating the right frame of mind to understand the Buddha’s teachings.</p><p>While someone can do good deeds on your behalf, they can’t benefit you if you don’t know about them and appreciate them. Even hungry ghosts—unfortunate souls damned to wander the earth—must be aware of good deeds done on their behalf by the living and respond with a word of recognition: <em>sah do. </em></p><p>Khin Maung Latt admitted that he plans to devote his old age to the worship, prayer and giving for which he has no time as a young teacher supporting a family. “It’s a gamble, but I’m choosing to focus on my family right now.”</p><p>He stressed that this religious season will not be about shoring up wealth and fame in the mundane world, but bringing his mind and heart closer to enlightenment. “If I die before I become more religious, I will lose something I cannot describe.”</p></body>