The Yangon Region Hluttaw is about to consider amendments to the laws governing YCDC elections but they are yet to be publicised and the lack of transparency is generating suspicion and controversy.

MORE THAN anyone in the country, Yangon residents have a voice. They have more political freedom, issues that affect them get more coverage in domestic media, and they have the best access to social media.

But when it comes to municipal elections, their ability to express themselves through the ballot box remains limited.

When the first election in 65 years for the Yangon City Development Committee was held in December 2014, voting was limited to one member of each eligible household, or 401,000 people out of a population of 5.2 million. However flawed the poll, at least Yangonites could claim to be represented to some degree.

But residents of the country’s biggest city have had no representatives at municipal level since May 16 – the day Yangon Region Chief Minister U Phyo Min Thein sacked the 115 members elected in 2014.

The reason given was to bring the terms of the municipal administration into line with those of the Union and state and regional governments.

But in the absence of any announcement of fresh elections, the decision to remove them was controversial. The positions have been vacant for nearly seven months and YCDC is being run by Mayor U Maung Maung Soe and four executives, all of whom were appointed by the regional government. 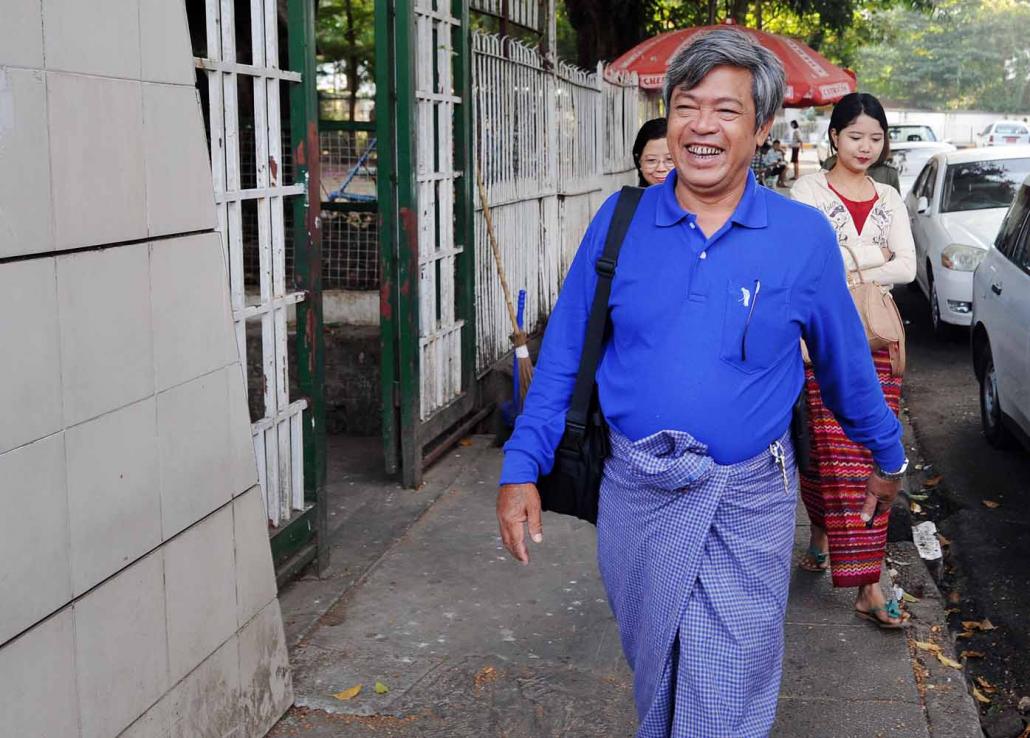 The main reason for the delay in holding another election is the need to amend the YCDC Law of 2013 and election-related by-laws enacted by the previous Union Solidarity and Development Party government in 2014.

Lawmaker Ko Nay Phone Latt (NLD, Thingangyun-1) said it was important the laws were amended before the next election is held. “It can create complications if we amend the law after the election process – we may need to hold the election all over again,” he said.

The by-laws, which contain most of the provisions related to the elections, were widely criticised when it was enacted because of numerous perceived weaknesses. An amendment in May of this year removed the ban on political party members running as candidates, and also set the term of elected representatives as concurrent with that of the government.

But a range of other issues remain, including the restrictions on who can vote, the absence of any limit on campaign spending, and lack of any provisions for handling disputes. The law also gives no clear description of the duties of elected and appointed members.

Changes on the quiet

The problems with the law are widely acknowledged, so there’s been little criticism over the decision to amend it. But the delay in doing so, and the apparent secrecy around the changes, is creating uncertainty and suspicion.

U Win Cho, who ran for a seat in 2014 and lost, said he suspected the mayor and appointed executive members of YCDC “might be up to something”.

He believes that the delay was because YCDC members were unhappy that planned amendments would give more decision-making powers to elected members.

YCDC has operated for 25 years with almost zero scrutiny or civilian involvement in its activities. The municipal body is considered one of the most corrupt government agencies; a survey conducted at a workshop in March conducted by the Myanmar Centre for Responsible Business and ASEAN CSR Network found that 15 percent of respondents had been asked for bribes in their business lives, and 24 percent in a personal capacity.

Even the current, highly flawed electoral system is enough to make some YCDC officials nervous. Some of the members elected in 2014 became a thorn in the side of the previous YCDC executive committee, speaking out against perceived corruption and misuse of power.

In a letter to the Yangon Region Hluttaw in late November, six civil society groups urged greater transparency in the process of amending the YCDC election law. 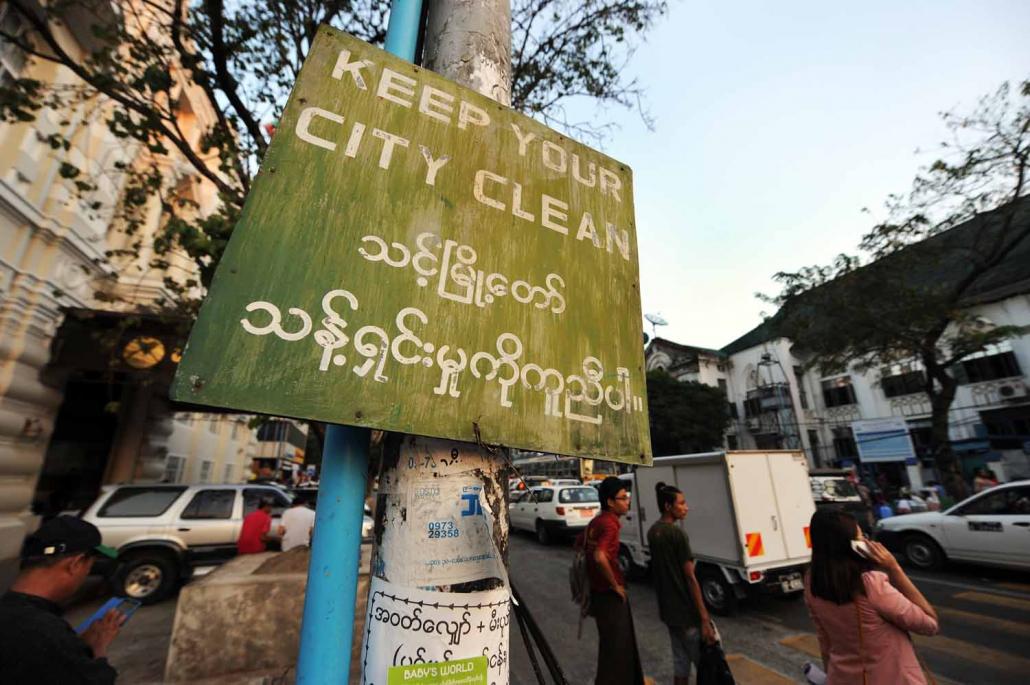 In their letter, the groups stressed the importance of YCDC services for city residents “from the cradle to the grave” and urged that the draft amendments be publicised. They also asked that CSOs and the public have opportunities to contribute suggestions to the drafting process.

The letter referred to an announcement by the regional hluttaw bill committee that said the draft would go before the assembly this month and might be approved in a single session. The announcement had exacerbated concern among the CSOs that the law would be enacted without public consultation or input from independent experts, the CSOs wrote in the letter. Ordinary people do not know what the amendments entail, they added.

The lack of transparency has been criticised by former Yangon regional MP and prominent anti-corruption campaigner Daw Nyo Nyo Thin, who was among those who signed the CSOs letter.

Nyo Nyo Thin said the hluttaw should send the draft to the Myanmar Gazette and it also needed to be published in a high-circulation newspaper such as state-run Myanma Alin (New Light of Myanmar) to be accessible to the ordinary people.

“But we have not even seen any draft of the amended YCDC election law, even in the municipal mouthpiece, the Myo-Daw (City) newspaper,” she told Frontier. “The YCDC has an annual budget of between K300 billion and K400 billion, so the election is very important for the people of Yangon,” she said.

“Don’t they [regional government and municipal administration] want to have people’s representatives on the YCDC?” Nyo Nyo Thin said. “It seems questionable.”

The exception was Yangon Region Hluttaw Bill Committee Chair U Thein Myint (NLD, Tarmwe-2) who said the lack of information was not intentional.

“I must honestly say that because we have no experience, we do not know what is the correct procedure to follow,” Thein Myint said.

“I asked the speaker to publicise the amendment process and he honestly believed that there was no need to do so if a law was being amended, rather than newly written,” he said.

“I also would say we also discussed more than twenty times with the MPs and the experts for the amending of this law.”

It’s unclear who these experts are, however. After the CSOs sent their letter, Thein Myint held one meeting with Nyo Nyo Thin in which he outlined the concept of the amendments. However, Nyo Nyo Thin told Frontier that this was not a satisfactory response.

“I don’t want to know secretly what’s in the draft bill, like I’m some special person. I just want all ordinary people to be able to see the draft. I can’t criticise and point out weaknesses if I see the draft confidentially.”

Aside from the weaknesses around the electoral process, another crucial issue is the proportion of elected members on YCDC. Under the existing law drafted and approved by the USDP-dominated hluttaw, four members are elected and five appointed by the government, including the mayor. This enabled the former regional government to maintain strong control over YCDC regardless of the election outcome.

Frontier understands that the final composition of the YCDC executive and how its members are chosen are still being hotly debated. Unsurprisingly, the municipal body wants to retain a majority of appointed members, while the regional hluttaw wants a majority of elected members.

Thein Myint said this was the “most important” change being considered to the law. He said the mayor, Maung Maung Soe, had urged that no change be made to the ratio of elected and appointed members on the executive, but the bill committee had adjusted the formula to increase the number of elected members.

“The difference between the mayor’s request and bill committee’s suggestion might be discussed in the hluttaw,” he said.

He declined to elaborate on other proposed changes – including whether all Yangon residents over the age of 18 would be allowed to vote – on the grounds that because the amendment bill had not been formally tabled “I have no mandate to say what they are exactly”.

A recent report published by the International Institute for Democracy and Electoral Assistance outlined a number of important reforms needed to improve the municipal election process.

The report – “Credible, transparent and inclusive municipal elections in Yangon: First steps towards reform of the electoral framework of the Yangon City Development Committee (YCDC)” – recommended a range of changes to the electoral framework, including extending voting rights to all Yangon residents over the age of 18, regulation of campaign financing and establishment of an election tribunal to handle disputes.

The authors, Ms Susanne Kempel, U Aung Tun and U Tun Lin Oo, also urged adequate consultation on changes to the electoral framework. They cautioned that if reforms are made “in haste or without proper public involvement, there is a risk that support for such measures and the elections in general will be limited”.

“On the other hand, a transparent and inclusive process for adopting and implementing the reform measures is likely to be viewed as a major achievement of the Yangon Region government, will build support for the elections, demonstrate that democratic measures are taking root and can serve as a model for other States/Regions in Myanmar.”

Given the uncertainty over the fate of the YCDC Law and election by-laws, the date of the next YCDC election also remains uncertain. U Khin Hlaing, a former elected member of the YCDC executive, told Frontier he hoped the vote would be held before the end of December.

“Because even if they [new elected members] can take office in January, they will have only a few months to prepare for the budget in April,” he said. “If the election is later than December, they will face difficulties with budget management, which is pretty complicated.”

Top photo: A voter checks the voter list on the day of the YCDC election in December 2014. (Steve Tickner / Frontier)