The war in the hills

The fighting in northern Shan State has highlighted the ominous rift between the armed groups that signed last October’s national ceasefire accord and those that did not.

“Have you seen our war victims yet?” asked the Shan youth eager to practise his English at a teashop in Kyaukme, northern Shan State. I explained that a couple of hours earlier I had, when I visited the Thi Ho Buddhist monastery in the centre of town.

The “war victims” at the hill-top monastery included an entire high school from Thawt San village, about 64 kilometres (40 miles) west of Kyaukme. About 300 people were sheltering at the monastery, including 228 students from the high school. When I visited they were sitting in the monastery compound, exercise books in their laps. A few of the older boys claimed higher ground among some stupas. All the older students were preparing for their final matriculation exams.

“We are keeping them all together here so they don’t get behind in their studies,” said the school’s principal. She and some teachers were among the displaced at the monastery, sharing sleeping mats on the floor in one of the rooms. 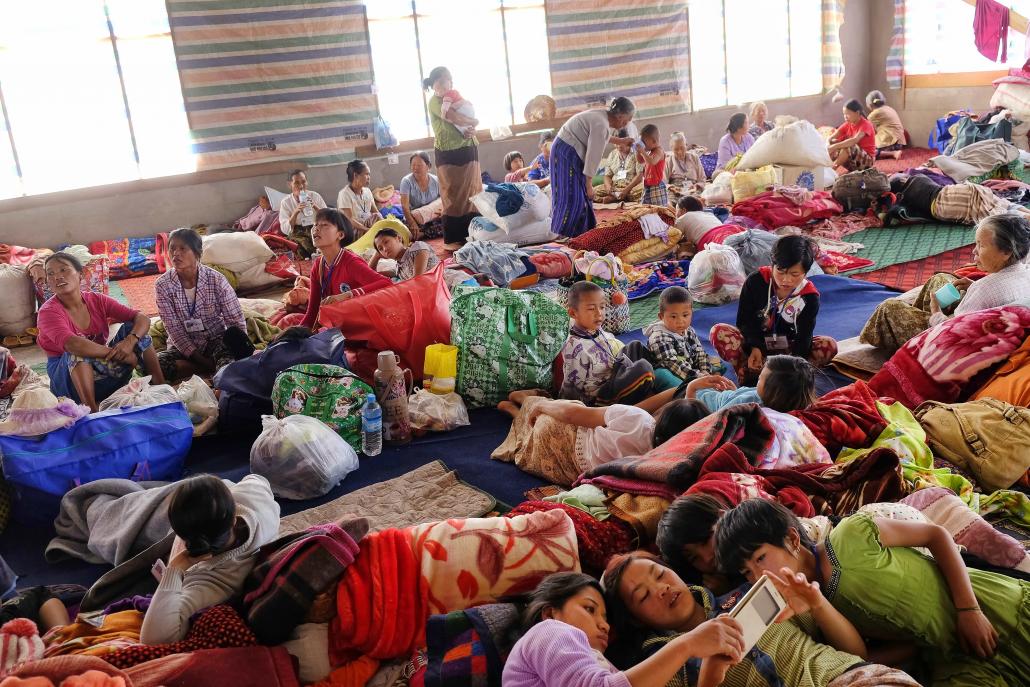 At least 23 villages in northern Shan State have been affected by the fighting that began in late November between the Shan State Army-South, the armed wing of the Restoration Council of Shan State, and the ethnic Palaung Ta’ang National Liberation Army.

The fighting escalated sharply in February and has created a severe refugee crisis.

About 5,000 villagers in Kyaukme and Namkham townships have been forced to flee their homes with little more than the clothes on their back. About 4,000 are sheltering in multi-ethnic Kyaukme, where about 19 of the town’s 40 monasteries are providing shelter for the displaced.

It’s not only temples sheltering the refugees.

The Bobour Yakada Nursing Home, which is yet to officially open because it is still being built, has accepted hundreds of displaced villagers since mid-January.

About 350 people from five villages are sleeping on the floor in the home’s spacious dining room, on mats arranged in five long rows. 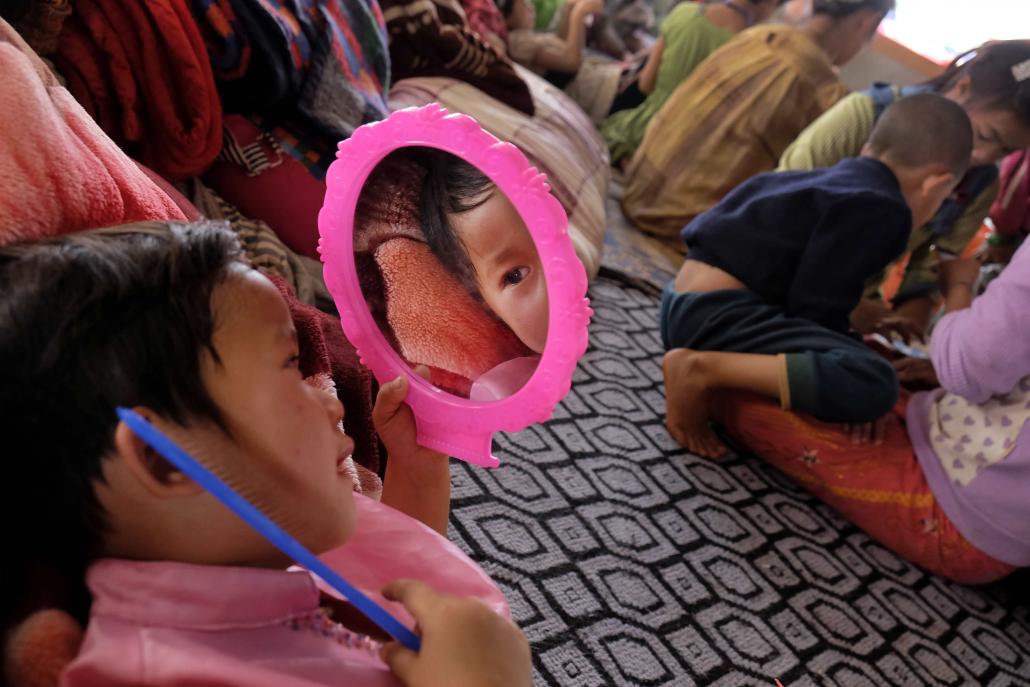 A child passes the time by grooming herself at the Bobour Yakadar Nursing Home in Kyaukme, where about 350 people from five villages are taking shelter. (Brennan O’Connor / Frontier)

A young Shan student tactfully explained that the rows were arranged according to the home villages of the refugees. All the villages are ethnic Shan with the exception of a Ta’ang village, he said.

Villagers displaced by the fighting have accused both the SSA-S and the TNLA of human rights violations.

The SSA-S and TNLA have traded accusations as well as bullets and blame each other for igniting the conflict by trespassing on their respective territory.

The TNLA has also accused the SSA-S of receiving support from the Tatmadaw, including approval to move troops and weapons through government checkpoints.

However, RCSS headquarters at Loi Tai Leng in southern Shan State near the Thai border is more than 300 kilometres from Kyaukme and it is difficult to understand how SSA-S troops could have been moved without Tatmadaw approval. 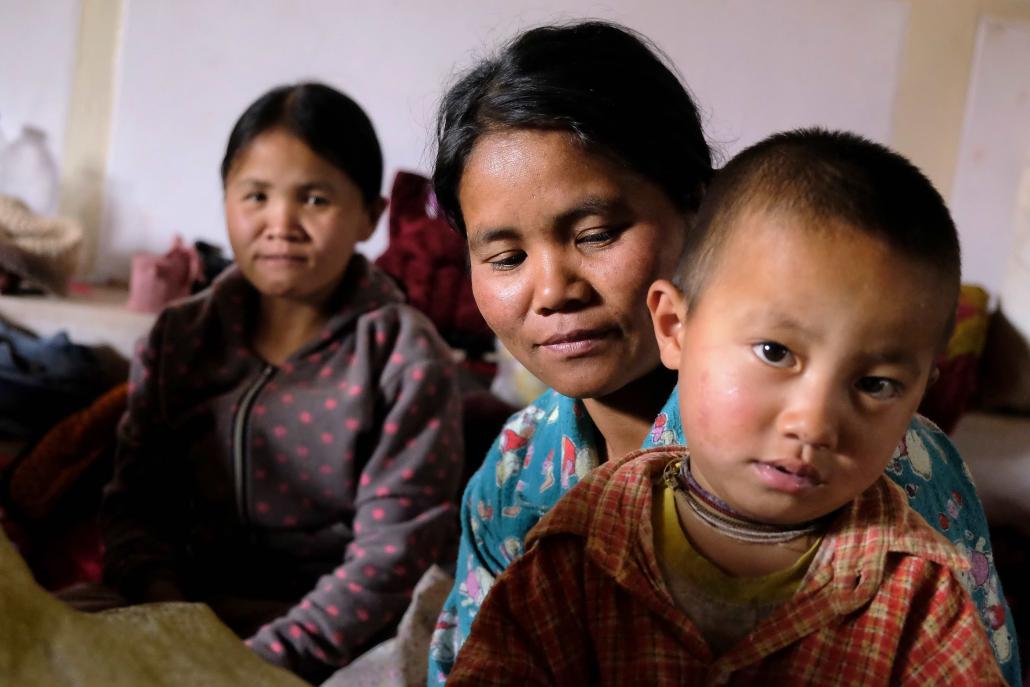 The SSA-S and the TNLA seemed to co-exist harmoniously in the recent past but that changed when the controversial National Ceasefire Agreement was signed on October 15. The RCSS was among the eight groups that signed the accord, from which the TNLA and other groups were excluded.

The fighting escalated just over a month after the signing of the NCA, the culmination of years of peace talks, which outgoing President U Thein Sein had hoped would be one of his administration’s main achievements. It was perhaps no coincidence that the signing of the NCA occurred only weeks before the November elections. The NCA has come under criticism for failing to be inclusive: The eight groups that signed were from among the 15 that had been involved in the peace negotiations.

At a recent meeting in Chiang Mai, the United Nationalities Federal Council, an alliance of ethnic armed groups that includes the TNLA but not the SSA-S, formed a five-member “negotiation team” aimed at easing tensions between the two armed groups. 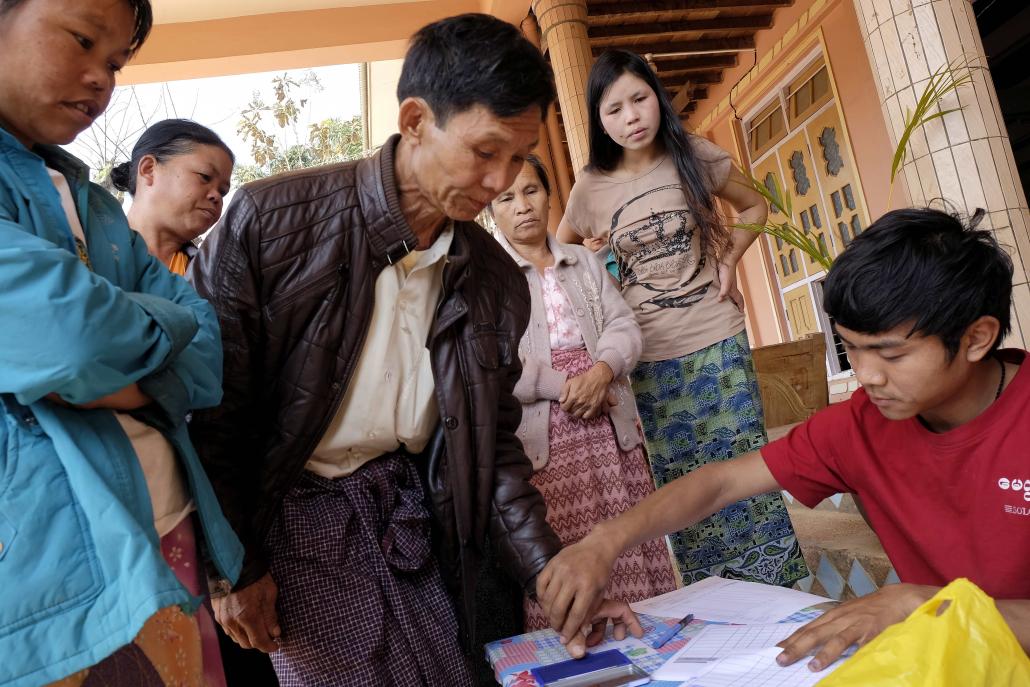 The fighting between the SSA-S and the TNLA has marked the beginning of what could well be a bloody year of civil conflict. The signs were there last year when the Tatmadaw pounded bases of the Shan State Army-North, another group that refused to sign the NCA, before the vote count from last November’s election was finished.

The National League for Democracy did not participate in the negotiations that led to the NCA or attend the signing ceremony. NLD leader Daw Aung San Suu Kyi said in January that bringing peace to Myanmar would be a priority for her government and she would strive for “an all inclusive agreement”.

However, it seems that the Tatmadaw, with which the NLD will have to share power under the 2008 Constitution – that provides for the Commander-in-Chief to appoint the ministers of Defence, Home Affairs and Border Affairs – has its own agenda on such important matters affecting the stability of the Union.

The NLD might control a majority of parliamentary seats, but on issues involving peace and conflict, it’s the top military brass who, quite literally, still call the shots.