A decade after the death and devastation of Cyclone Nargis, there’s dissatisfaction over storm shelters in some of the worst-affected Ayeyarwady Delta villages.

WHEN U Maung Kyin switched on his radio early on May 3, 2008, other residents of Pyinsalu village in Ayeyarwady Region’s coastal Labutta Township gathered to listen to the news on the state-run broadcaster, Myanma Athan.

The government radio said only one person had died in the township because of a cyclone the previous evening.

“Then people shouted, ‘The bitches are lying!’ We knew it was a lie because in this village we had lost at least 500 people just a few hours earlier,” recalled Maung Kyin, who owns a salt farm covering hundreds of acres at Pyinsalu.

The village is about 56 kilometres (35 miles) east of Hainggyi Kyun, at the tip of one of the lowest-lying spits at the far southern end of the delta.

When Cyclone Nargis made landfall at Hainggyi Kyun at about 5pm the previous day, Maung Kyin and his family were in Pyinsalu to monitor the salt harvest. 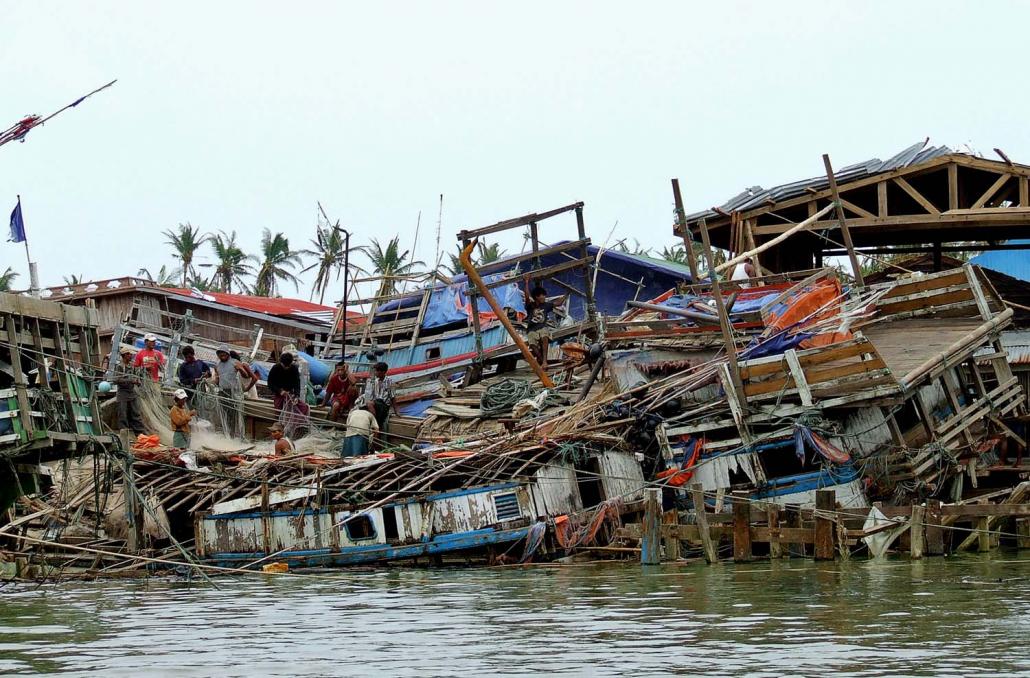 Survivors stand on houses destroyed by Cyclone Nargis in the devastated area of Hainggyi Kyun, Ayeyarwady Region, on May 11, 2008. (AFP)

About 200 people sheltered in his sturdy two-storey house made of bricks and wood. As the storm surge advanced, they rushed upstairs. “We were lucky that the house was strong enough to resist the strong winds and tidal water,” he told Frontier in Labutta on April 29. He estimated the storm surge reached a height of 15 feet (4.5 metres).

The next day, after its brief and erroneous report on the cyclone, government radio repeatedly aired a song urging voters to approve the new constitution, which enshrined the military’s powers.

A referendum on May 10 approved the 2008 Constitution; according to the junta the vote was 92 percent in favour. Voting in cyclone-affected regions was delayed for two weeks, but by then the result had already been confirmed.

“It was unbelievable and unforgettable that the military government continued its propaganda while its people suffered so much,” Maung Kyin said.

The masthead of the state-run New Light of Myanmar, on the morning of May 2, calling on the population to vote in the upcoming referendum on the 2008 constitution.

Junta officials claimed the meteorology department had begun issuing storm warnings on the radio and through public address systems in delta villages, from the morning of April 29. State newspapers warned that a cyclonic storm would hit the coast, causing thunderstorms and generating winds of up to 50 miles (80 kilometres) an hour.

What arrived was a devastating category four cyclone, with winds more than twice as strong as forecast. It swept across the Bay of Bengal, creating storm surges that overwhelmed the fields and swallowed entire villages. Residents told Frontier that the authorities had not warned them about the storm surge, which caused most of the fatalities. 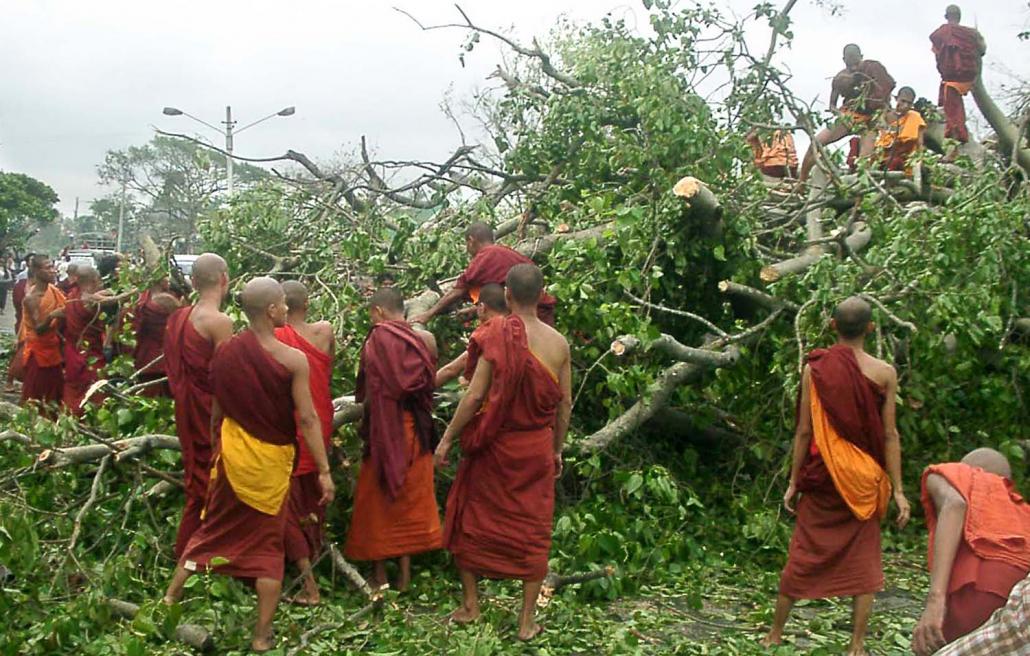 Buddhist monks attempt to move an uprooted tree in downtown Yangon on May 5, 2008. (AFP)

Ko Tin Aung Win and his elder brother U Myint Naing, both salt farmers in Kanbala village in Labutta Township, said they had been aware of the approaching storm since April 30 due to warnings broadcast on Myanma Athan.

“We knew the storm was coming, so we asked our men and their families to stay together in my house and salt storage buildings on the evening of May 2,” Tin Aung Win told Frontier.

“We thought we would be alright in these buildings. But the high tide swept everything away,” he said. His two-storey house disappeared beneath the water; his wife and 44 of the 150 or so workers on his farm were killed.

“The tide was like a monster. It killed people in a short time, just around two hours,” he said. “I was lucky because all three of my children were found alive after the water receded.” He never found the bodies of most of his workers.

“If we knew that the tide would come after the storm, we would definitely not have stayed home because our village is in a very low-lying area,” he said. 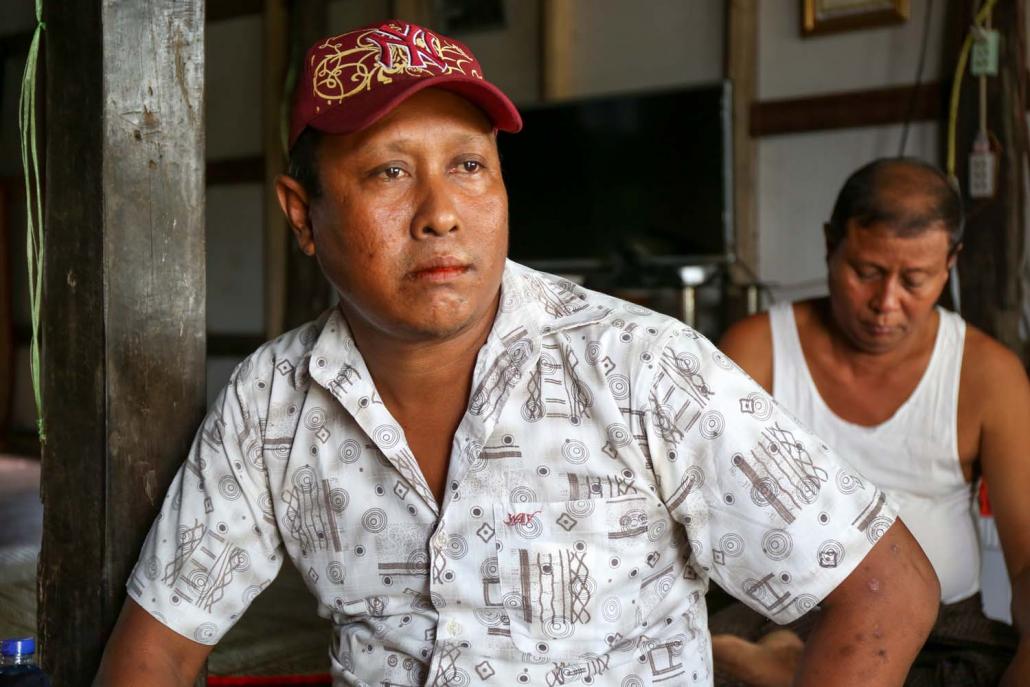 Ko Tin Aung Win, whose wife, and 44 of his workers, were killed when the farm he owns was flooded by a huge wave caused by the storm. (Victoria Milko | Frontier)

Another survivor was U Mya Aung, a resident of Oo Yin Gone village, who was rescued from drowning. His rescuer, U Tun Lwin, had taken his wife to shelter at a monastery when he saw Mya Aung struggling in the water.

“When I swam to him he grabbed me and we both briefly submerged. So I punched him on the face and restrained him and then we managed to swim to a barn,” Tun Lwin, 52, told Frontier on April 29.

“After the water ebbed I thought he was dead, but he had lost consciousness,” he said.

A few months later, Mya Aung became a monk and was given the ordination name, U Pyinnya Thiri.

“I was 52 when I was almost killed by Nargis and I started thinking about death,” Pyinnya Thiri told Frontier at the Oo Yin Gone village monastery late last month.

“I decided to spend the rest of my life learning the Buddha’s teachings and meditating,” he said.

Daw Khin Hla, 52, a resident of Thingan Kalay village, survived Nargis because of her long hair; it was caught in a tree after her house was swept away by the storm surge. 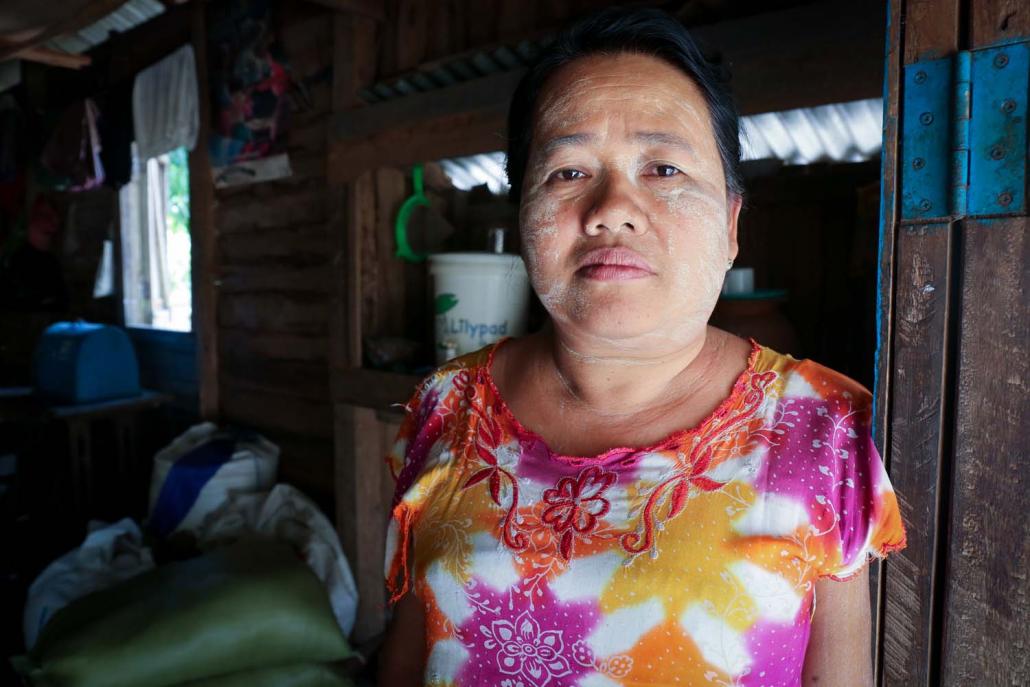 Daw Khin Hla, a 52-year old resident of Thingan Galay village, was saved because her long hair was caught in a tree after her house was swept away by the tide. (Victoria Milko | Frontier)

Khin Hla said about 60 people were sheltering in her house because they thought it would be strong enough to resist the storm. “I lost most of my family, including my parents,” she told Frontier.

“We had no fresh water and had to rely on coconut juice for three days and on the fourth day, independent donors arrived,” Khin Hla said.

When Nargis slammed into the delta 10 years ago on May 2, it created the worst known natural disaster in Myanmar’s history. The awesome power of the cyclone pushed the tidal surge about 40 kilometres inland, smashing everything in its path. It left more than 138,000 people dead or missing and affected nearly 2.4 million residents of 37 townships in Ayeyarwady and Yangon regions, according to United Nations estimates.

Labutta Township was the most affected and during a recent visit to the area, Frontier travelled to what remains of Thingan Gyi village. Formerly a riverbank settlement of about 600 houses, the village has been abandoned, save for a few dozen fishermen and their families. Some residents have resettled at the new Thingan village, Thingan Athit, about a 10-minute motorbike ride from the old one.

“An NGO provided us with a new house in the new village,” said Ma Kyin Myaing who lives at Thingan Gyi.

“But it is not close to the river, and as we make a living from fishing, it was convenient to move back,” she told Frontier.

A three-storey cyclone shelter funded with support from UN Habitat and the European Union has been built next to the new village and is being used as a school.

Trees were planted around the shelter about five years ago, but they were destroyed in a recent fire. It spread from nearby paddy fields when farmers burned the rice stalks after the harvest.

About 70 big and small cyclone shelters have been built in Ayeyarwady with international financial and technical assistance, and another 57 are planned this year, U Win Myat Aye, Minister for Social Welfare, Relief and Resettlement, said at a memorial service to commemorate those who died during the cyclone, held in the regional capital, Pathein, on May 2. 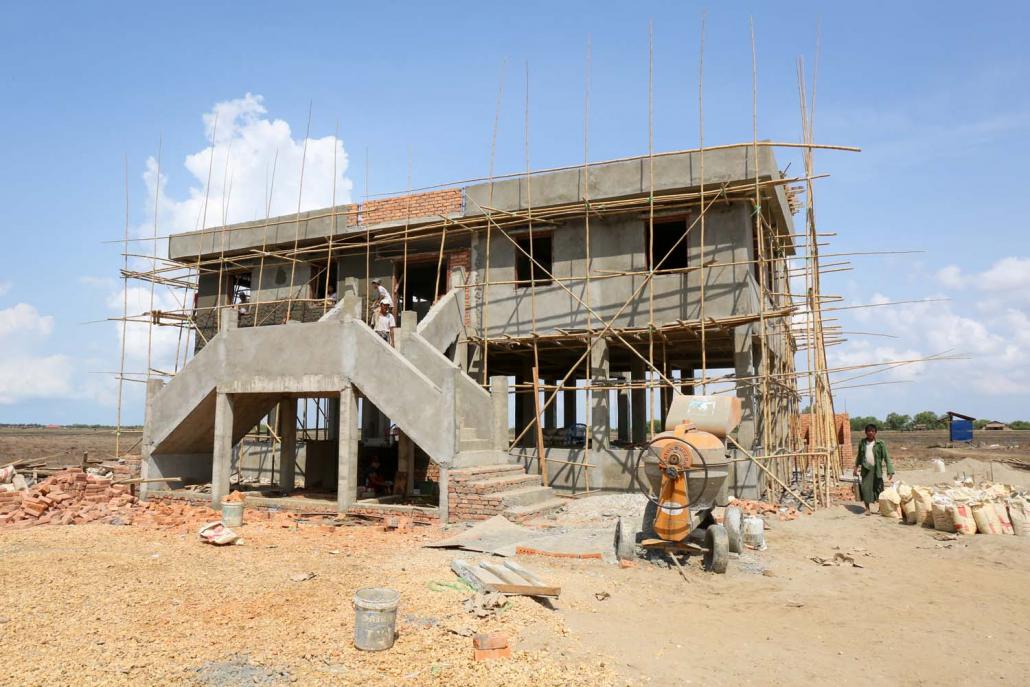 New cyclone shelters are being built with the assistance of international organisations. This one is being constructed at Oo Yin Gone village in Labutta Township. (Victoria Milko | Frontier)

Additionally, Win Myat Aye said, a natural disaster management school was opened at Hinthada, in Ayeyarwady Region, a central emergency response department at Nay Pyi Taw, and a youth-empowered school for children orphaned by Nargis was opened in Labutta.

Frontier saw a three-storey brick shelter being built near Oo Yin Gone village, but did not see any being constructed in many low-lying areas, including the Kanbala village tract where Tin Aung Win lives.

Khin Hla said that she could not rely on the shelter built in her village, Thingan Galay, and if a storm hit she would seek shelter up some large trees in her compound.

“I am not going there [to the shelter], even if a storm comes because it is not big enough to house all the villagers,” she told Frontier, adding that it was also believed that the shelter was built with low-quality raw materials.

“Some parts of the shelter are already damaged,” she said.

Maung Kyin said two big shelters erected in Pyinsalu village were not big enough to hold all the community’s residents and he had built one with his own money on his salt farm.

He said that instead of supporting the move, the forestry department had threatened to take legal action against him for building the shelter on land it claimed to own.

But Maung Kyin is determined, and has refused to demolish the shelter.

U Aung Moe Win, who leads a community group in Labutta, said many shelters were in the wrong locations and had been built with low quality materials.

“The authorities should consult with the local community before deciding where to build more shelters,” he told Frontier in a phone interview on April 28.

TOP PHOTO: A sattelite image shows Cyclone Nargis on the morning of May 2, 2008, the day it made landfall in southern Myanmar. (AFP)