‘The tide was like a monster’: Ten years after Nargis, delta remains vulnerable

LABUTTA, Ayeyarwady Region – When U Maung Kyin switched on his radio early on May 3, 2008, other residents in his village of Pyinsalu gathered to listen to the news on the state-run channel, Myanma Athan.

The government was saying that just one person had died in Labutta Township as a result of a cyclone the previous evening.

“Then people shouted: the bitches are lying. We knew it was a lie because we had lost at least 500 people in this village a few hours ago,” recalled Maung Kyin, a businessman who owns hundreds of acres of farmland in Pyinsalu.

When Cyclone Nargis made landfall at Hainggyi Kyun in Ayeyarwady Region at around 5pm the previous evening, Maung Kyin and his family were in Pyinsalu to monitor the salt harvest.

The village is about 56 kilometres (35 miles) east of Hainggyi Kyun, at the tip of one of the lowest-lying spits in the delta.

Some 200 people sheltered in his wooden and brick two-storey house. As the tide advanced, they rushed upstairs. “We were lucky that the house was strong enough to resist the strong winds and tidal water,” he told Frontier in Labutta on April 29. He estimated the water had risen 15 feet (4.5 metres).

The following day, after its brief report on the cyclone, the government radio station repeatedly aired a song urging anyone over 18 years old to vote for the approval of a new constitution, which would enshrine the military’s powers and which remains in place today.

On May 10, the junta held a referendum that it said approved the constitution with a 92 percent vote in favour. Voting in cyclone-affected regions was delayed two weeks, but by then the result had already been confirmed. “It was unbelievable and unforgettable that the military government continued its propaganda while its people suffered so much,” Maung Kyin said.

Junta officials claimed the meteorology department had issued warnings on the radio and through loudspeakers in villages in the delta, from the morning of April 29, almost four days before the storm struck. State newspapers warned that a cyclonic storm would hit the coast, causing thundershowers and wind speeds of up to 50 miles an hour.

What arrived was a devastating category four cyclone, with winds four times stronger than those forecast by the government. It swept across the Bay of Bengal, creating storm surges that overwhelmed the fields and swallowed entire villages. Residents told Frontier that authorities had not warned them about the storm surge, which caused most of the fatalities. 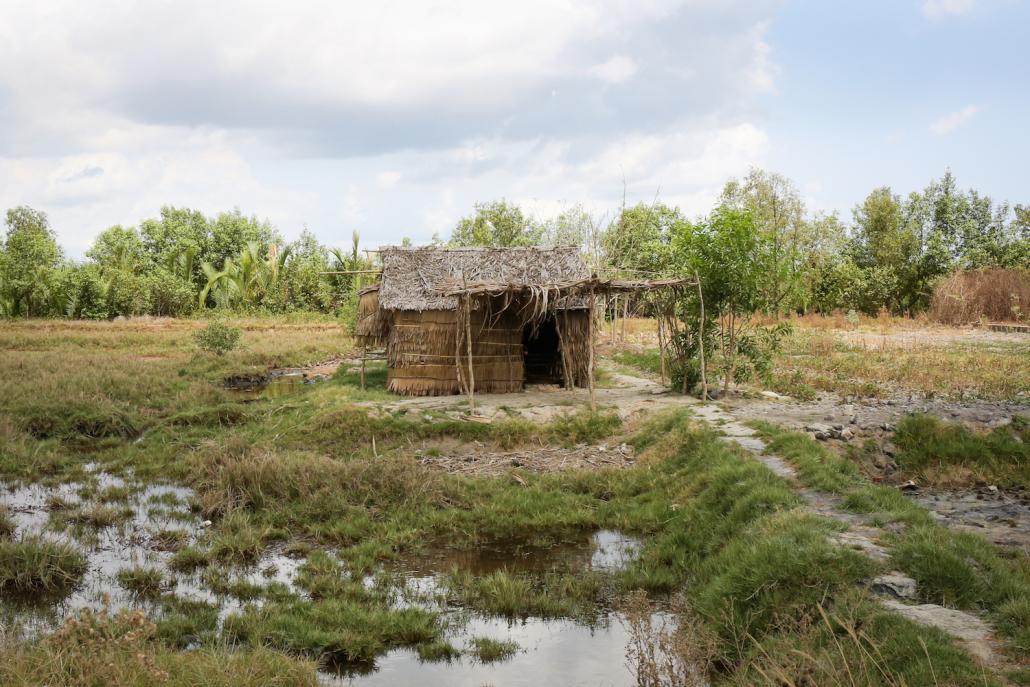 A house on the side of the road in Labutta Township. Most villages in the area have shrunk in population, as many of those who survived the storm moved away. (Victoria Milko | Frontier)

Ko Tin Aung Win and his elder brother U Myint Naing, both salt farmers in Kanbala village in Labutta Township, said they had been aware of the storm since April 30 due to warnings broadcast on Myanma Athan.

“We knew the storm was coming, so we asked our men and their families to stay together in my house and salt storage buildings on the evening of May 2,” Tin Aung Win told Frontier.

“We thought we would be alright with these buildings. But the high tide swept everything away,” he said. His two-storey house disappeared beneath the waves; his wife and 44 of the 150 or so workers on his farm were killed.

“The tide was like a monster. It killed people in a short time, just around two hours,” he said. “I was lucky because all three of my children were found alive after the tide eased.” He never found the bodies of most of his workers.

Daw Khin Hla, a 52-year old resident of Thingan Kalay village, was saved because her long hair was caught in a tree after her house was swept away by the tide.

Around 60 people were sheltering in the house, she said, because they thought it would be strong enough to resist the storm. “Though I was alive, I lost most of my family members including my parents,” she told Frontier.

“We, the survivors, found that we had no water,” Khin Hla said. “So we had to rely on coconut fruits for three days. On the fourth day, independent donors arrived.”

Today marks 10 years since Cyclone Nargis, which was the deadliest natural disaster on record in Myanmar’s history. It left more than 138,000 people dead or missing and affected almost 2.4 million more, in 37 townships in Ayeyarwady and Yangon regions, according to United Nations estimates.

Frontier visited villages in Labutta Township, the area most affected by the cyclone, last week.

Thingan Gyi village, formerly a settlement of around 600 houses, is now abandoned. Only a few dozen fishermen and their families resettled there after the storm; most people moved away. 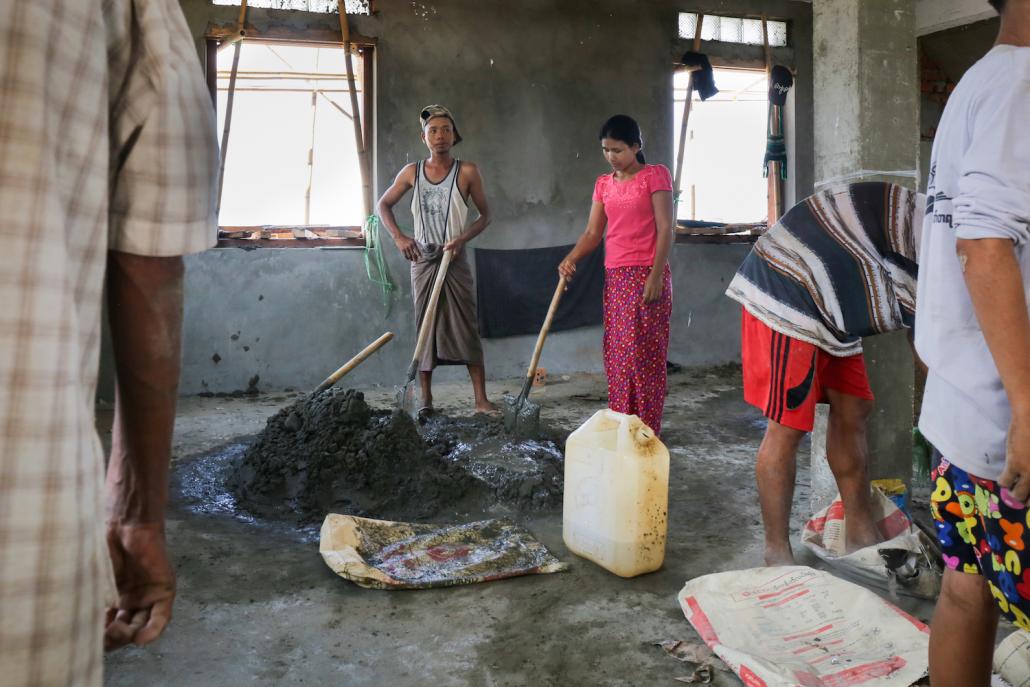 “An NGO provided us with a new house in a new village,” said Ma Kyin Maying, referring to New Thingan Gyi village, which is a 10-minute motorbike ride from the old village on the riverbank.

“But it is not close to the river. We are fishermen and fisherwomen, so we moved back,” she said. A three-storey cyclone shelter built with financial support from UN Habitat and the European Union beside the new village is being used as a school.

Trees were planted around the shelter four or five years ago. But they were recently destroyed in a fire that spread from a nearby paddy field, where farmers burned the stalks of their crop after the harvest.

Around 50 large and small cyclone shelters have reportedly been built in Ayeyarwady Region, with international financial and technical assistance.

Frontier saw a three-storey brick shelter being built near Oo Yin Gone village in Labutta. But many low-lying areas including Kanbala village tract, where Tin Aung Win lives, still have no shelters.

Maung Kyin said two big shelters were built in Pyinsalu village, but these are nowhere near large enough for the entire population.

“So I built a shelter on my salt farmland with my own money,” he said.

Instead of supporting him, the forestry department threatened legal action for building the shelter on land they claimed was owned by the department. But Maung Kyin persevered. 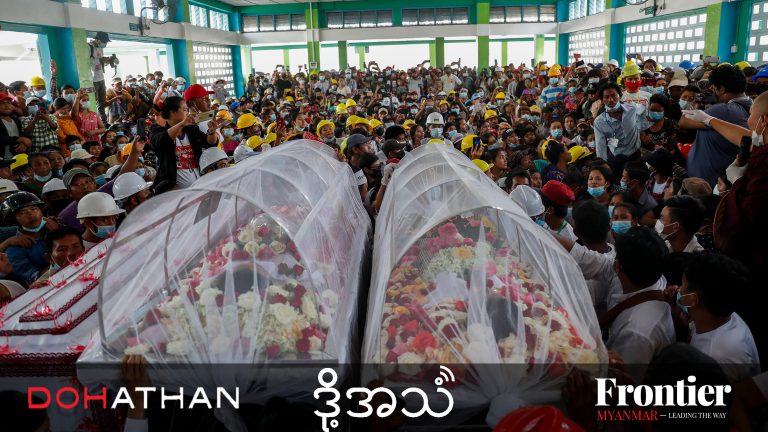 This week, we talk to the families of those who have died in detention.
BY Frontier