The yellow-paste seen on the faces of women and children across the country is typically made using a traditional technique, but the owner of a factory in Mandalay is turning it into a commercial enterprise.

“What is that yellow-white paint that they’re wearing?”

NEARLY EVERY new visitor to Myanmar will find themselves either asking or answering this question, whether it be discussed while walking through the crowded stalls of Bogyoke Market or through the inquisitive comments from family members cruising through the latest photos posted on social media.

Thanaka: it’s nearly impossible to walk down a street in Myanmar without seeing it adorning the cheeks of people walking by. Traditionally it is made by grinding the bark of a thanaka tree against a stone slab (known as kyauk pyin) and adding water, creating a cosmetic paste that can be applied to the skin as a sunscreen or aesthetic adornment.

But the process of hand making thanaka can take a long time, and with ready-made cosmetics from international companies becoming increasingly prevalent in Myanmar, thanaka has started to take on a more modern form: pre-made. 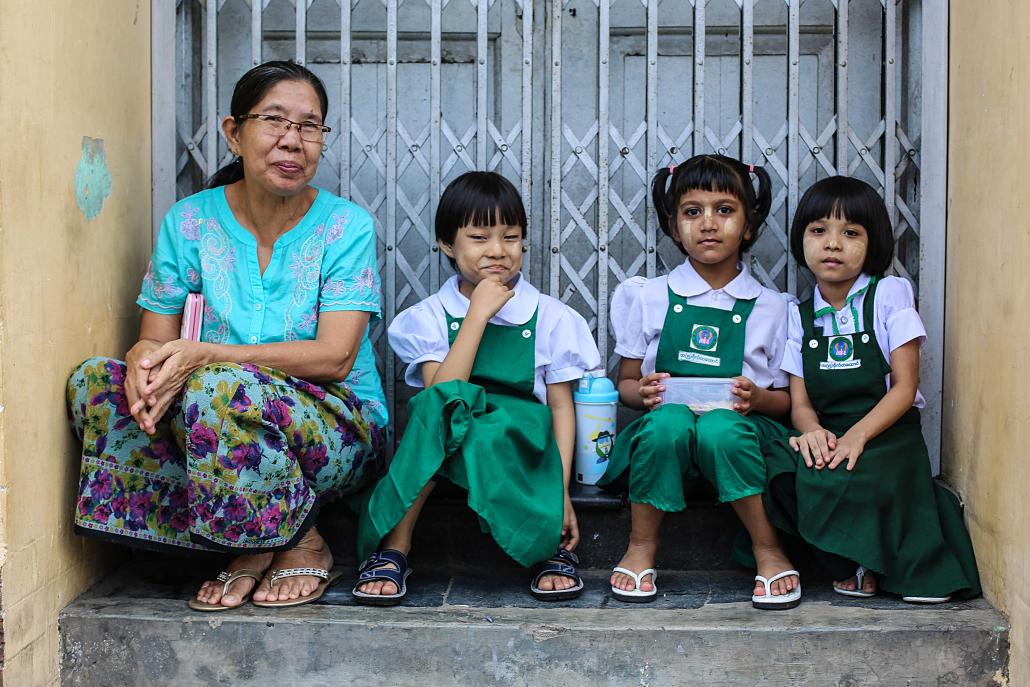 U Philip Su, 70, is the owner of one of several companies in Myanmar that is churning, mixing, and shipping ready-made thanaka to cosmetic stores across the country.  Philip Su, who opened a cosmetic shop in his Shan State hometown of Kyaukme in the early 1980s, credits his wife with his introduction to the thanaka business.

“My wife was managing the shop and one day she said to me, ‘Why don’t you make thanaka?’” Philip Su said with a laugh. “I said to myself, ‘Why not?’”

Philip Su says he then left Shan State for Mandalay, buying ingredients for ready-made paste from the local market and hand-making a few small, simple thanaka creams and adding his own preservatives.

“Three years later I realised it wasn’t a good business for making money,” Philip Su said. “But I became really interested in the aspects of how to create, produce and perfect it.”

Philip Su, who was living in a small rented home in Mandalay at the time, decided he wanted to expand his operation and began renting land from the government to build a factory on the site he still operates his business today. 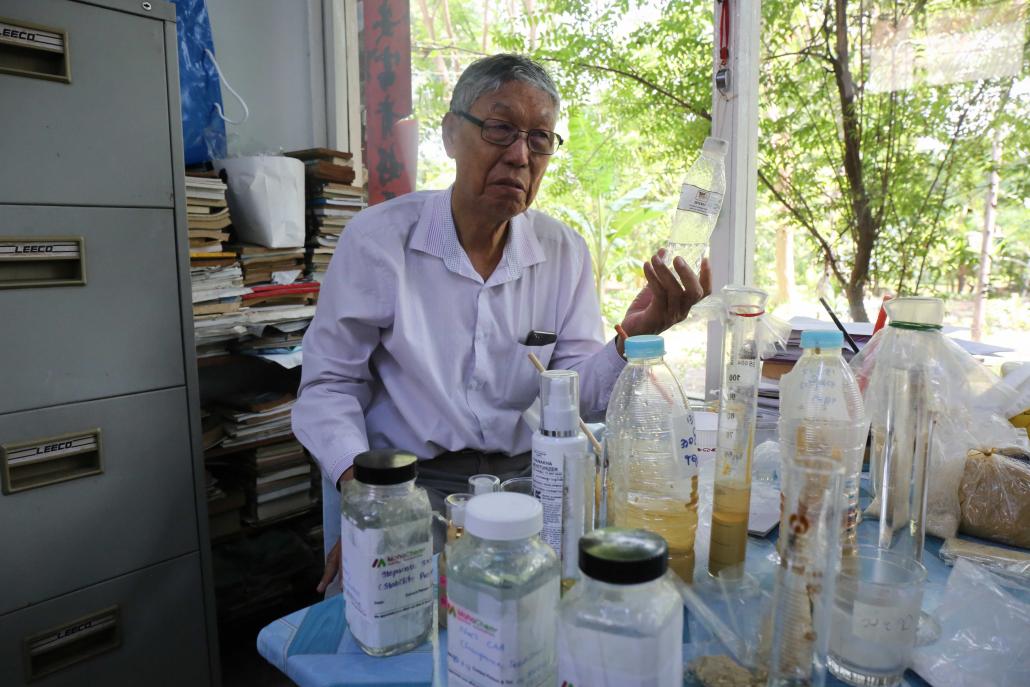 U Philip Su in his Mandalay office. For decades, Philip Su has worked to perfect his recipe for premade thanaka. (Victoria Milko | Frontier)

One aspect of Philip Su’s thanaka production that keeps with tradition is the simplicity in how it’s made, importing thanaka branches and bark from farms in the surrounding area. Shipments arrive in large burlap bags and are hand-sorted for quality control, undesirable pieces being thrown away or saved as examples of what to look for when sorting.

Once the bark is sorted it is sent to industrial washers that aim to remove any bugs, sand or other undesirable debris. Philip Su’s water filtration system, simple and efficient, is something to admire. Pumping water from the underground aquifer he purifies it through a dual filtration system that monitors pH balance. Plants surround the system, acting as an additional pH monitor. If you take a tour of the factory, Philip Su will urge you drink a glass of the water, just to show how high the quality of it is. 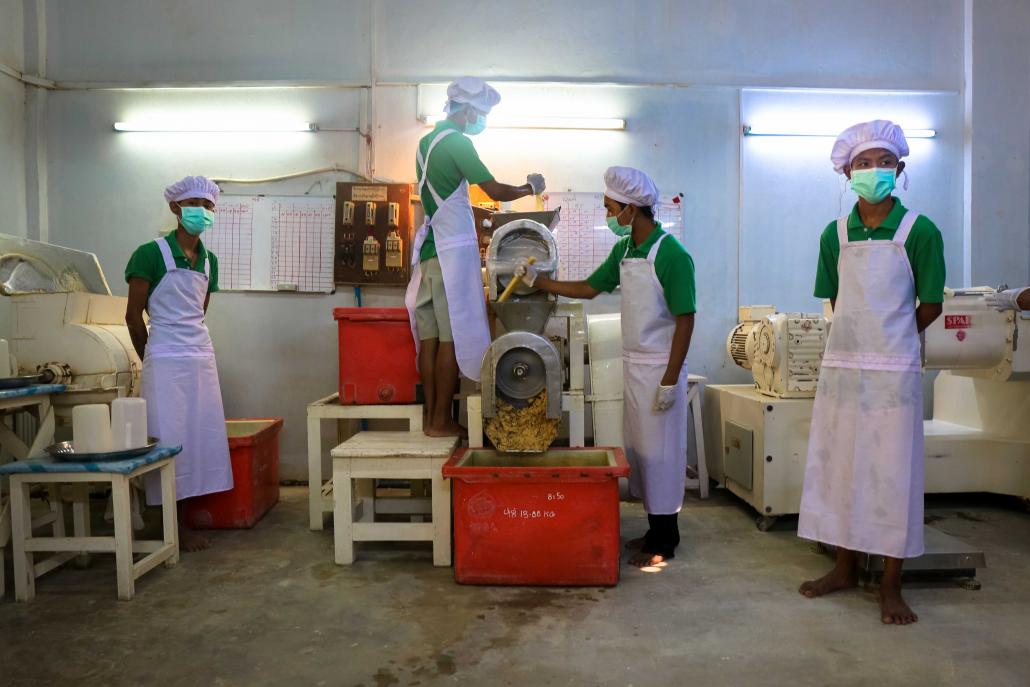 After a thorough washing the thanaka is then steamed and sent to be ground; heavy stones strung from a rod that manually adds weight to get the most of the product. The ground thanaka then goes through three different filtration systems, further removing any sand or dirt.

The filtered liquid thanaka is then pressed and dehydrated, producing a clay-like clump of pure thanaka paste. Moving the paste to an air-conditioned room, filled with the smell of lemons used for the preservation process, workers then pass the paste through a machine that finely chops it, while hand-adding preservatives and perfumes. 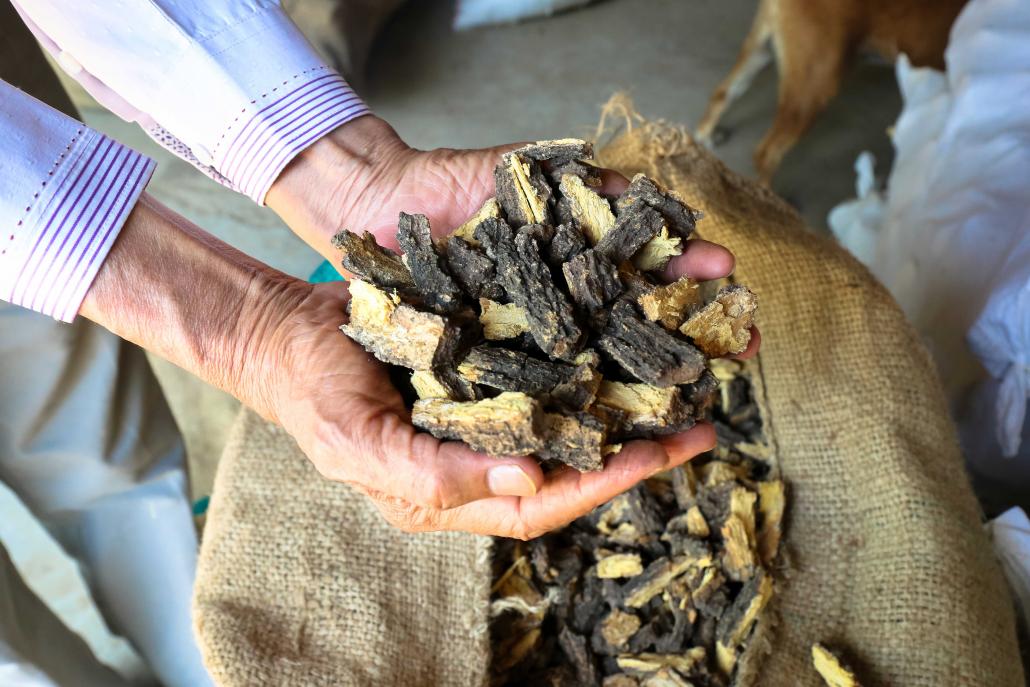 The thanaka, now mixed and ready-to-wear, gets moved into the packing room where workers hand pack and seal small plastic jars, placing them into cardboard boxes.

Finally, a factory-worth of work sits in a small plastic jar, waiting to be shipped across the country.

After strolling through the factory rooms, Philip Su walks across the property and into his self-proclaimed “laboratory.” Upon stepping into the room it becomes clear that Philip Su has a passion for tinkering and experimentation. Vials, bottles and beakers of different-coloured liquids sit on every surface, while clumps of thanaka sit in tightly sealed bags. A dusty calendar on the wall, a few years out of date, includes a picture of a train engine.

“See the locomotive there? I love locomotives,” Philip Su said, pointing to the calendar. “How things work, why they work, I love it- even when they’re hard to find.”

Locomotives proved to be one of the harder parts of getting a thanaka business off the ground, he said.

“We still don’t have the proper machines like they do in other countries,” Philip Su said. “That’s why we have to do so much by hand.” 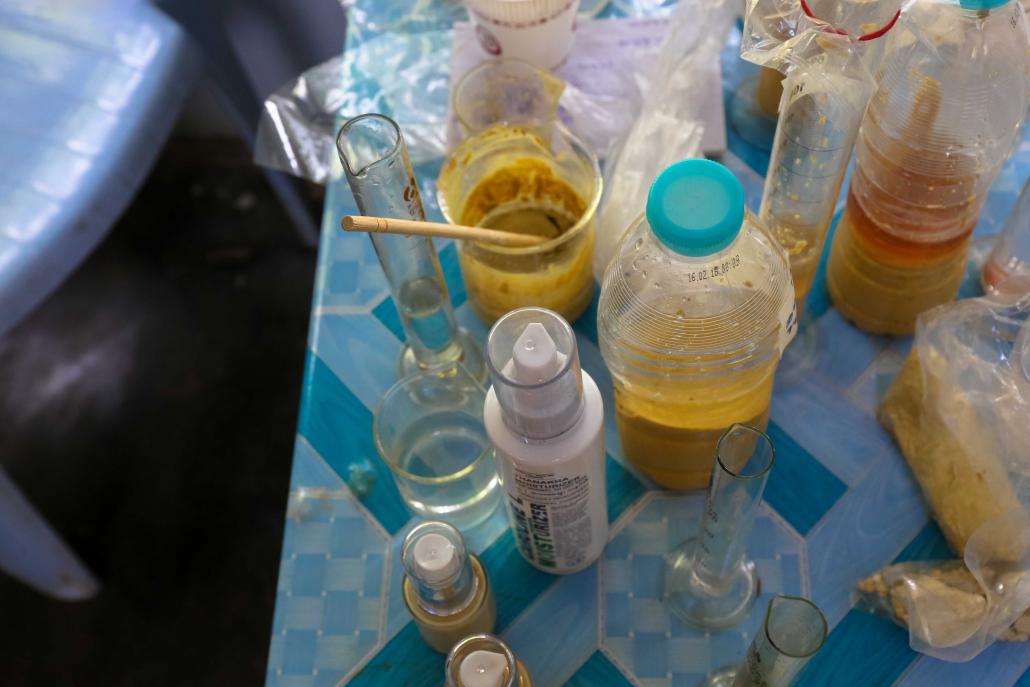 He added that having access to preservatives was a major challenge when he first began his thanaka business.

“Think of thanaka like food, it’s mostly made of carbohydrates” Philip Su said. “It can go bad very easily. When the country was still closed-off we couldn’t access preservatives, and had to try and come up with our own. It made business very difficult.” 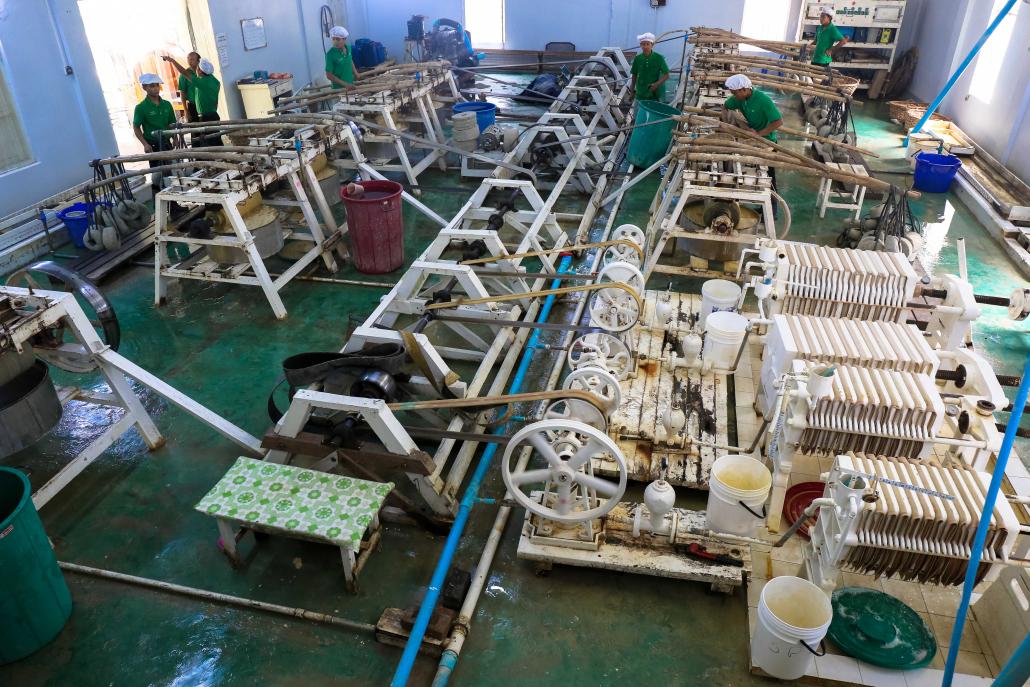 Bags of black-spotted thanaka sitting on a desk nearby show that finding the perfect combination of preservatives can still prove to be tricky.

“I’m always experimenting, trying to find the perfect recipe. I have to in order to stay in business,” he said. 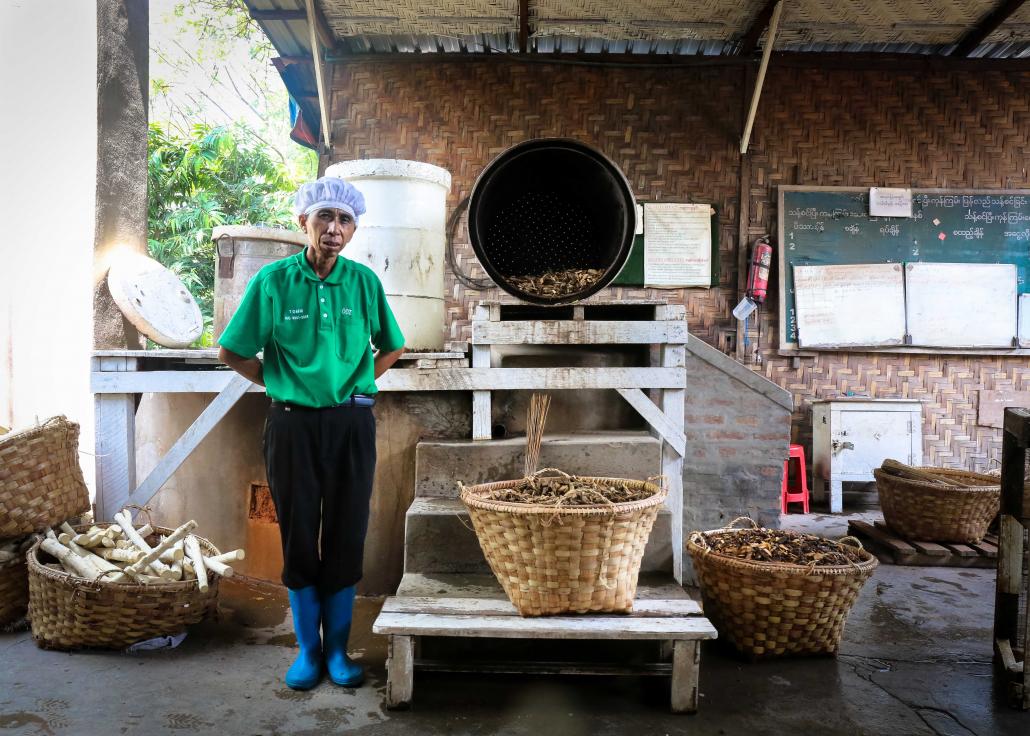 “If you plant a thanaka tree it can take maybe 15 or 20 years until it’s ready [to be harvested],” Philip Su said. “It takes time and technique to make sure they grow properly, and even then it’s not guaranteed to grow perfectly.” 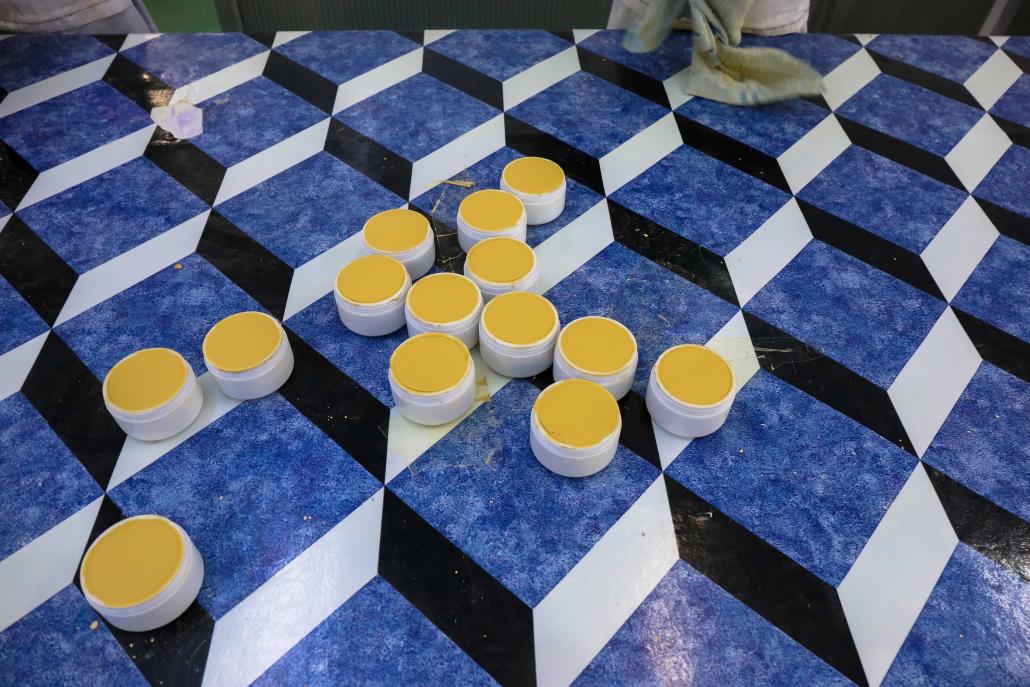 To help alleviate this issue, he said that thanaka producers sometimes use different types of trees, including one particular type that’s more renewable.

“For one of the tree types the growers will just use the bark, not having to cut down the entire tree. But even then people may come and cut the trees down in the night, or sell the trunk as firewood,” he said. 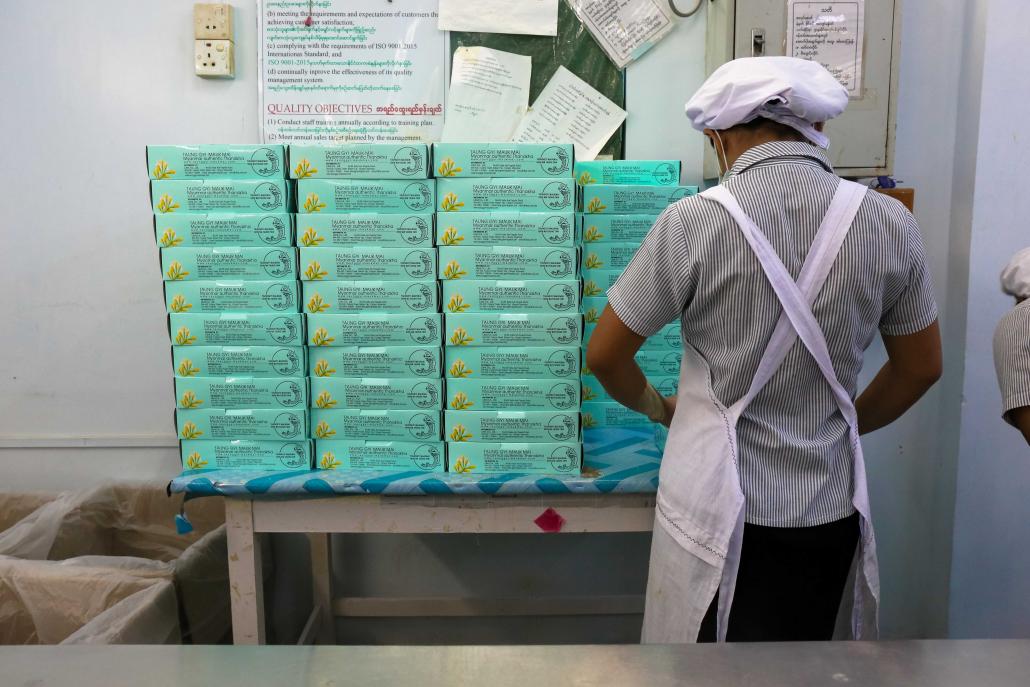 But, he admits, perhaps the most fickle aspect of being in the thanaka business is changing tastes in Myanmar.

“Women wear cosmetic make-up in the day time now, using thanaka less,” Su says. “But people still feel something special when they apply it. Times are changing, but the love of thanaka hasn’t.”