The sting is in the aftermath

Much ink has been spilled about the prospect of pre-election violence, but the most serious risks are likely to surface once the polling booths have closed. 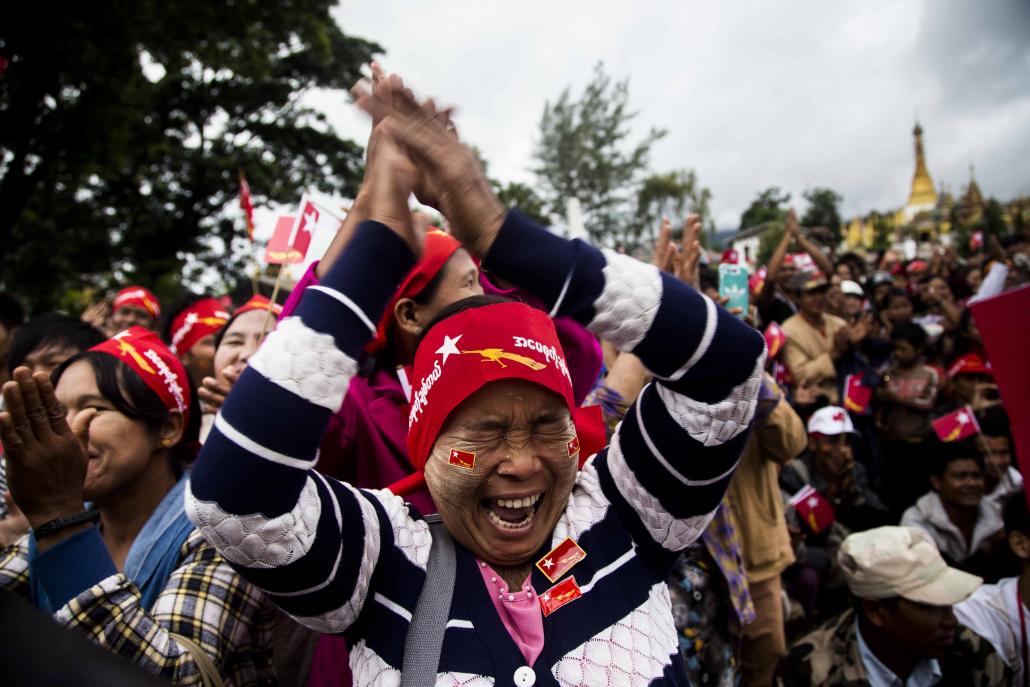 A lot of focus in the run-up to the elections slated for November 8 has been on the campaigns, the messy voter lists, the Lady’s destiny of course, and the role of the Union Election Commission. There have been a few violent incidents, most notably a sword attack last week on an NLD candidate in Thaketa township, Yangon, but thankfully, no large scale disturbances have occurred.

The real sting is likely to be in the aftermath. It’s probable that it will be very hard for the two main contestants to admit and accept defeat.

As soon as the voting stops at 4 pm on Sunday, the jockeying for position will begin. Using data that its election monitors have gathered, the National League for Democracy will either try to announce victory, or start pushing the narrative of fraudulent elections and a stolen victory.

The NLD and Daw Aung San Suu Kyi enjoy quite a bit of popular support, and feel that an election victory would be a just reward after the annulled results of the 1990 election, when the party delivered a crushing defeat to the junta-sponsored National Unity Party. Daw Suu has been upping the ante this week by making bold statements, including a proclamation that she would be “above the president” if the NLD wins. If nothing else, this suggests a feeling of entitlement on her part. Were the NLD to lose to the USDP, or if it were to eke out a meagre victory, the numbers might result in her trying to whip up civil disobedience.

The ruling Union Solidarity and Development Party – by all accounts, not particularly popular – fears defeat as well. Its high-ranking members have a lot to lose economically if the NLD were to assume the reins of power, an unease that it shares with the Tatmadaw. If the NLD signals that it expects to have exclusive control over the government, this will invariably rustle some feathers at the USDP headquarters in Nay Pyi Taw.

An overexcited or reckless response by the NLD after winning the election might result in pushback, or even a constitutionally-sanctioned coup  by the military.

There is real potential that the NLD could be disappointed by the results. We do not have a thorough picture of the electoral preferences of the Myanmar people yet. Opinion polls are all but nonexistent in Myanmar. Trust issues and fear still prevail: in a recent survey conducted by the Asia Barometer project, over half of the respondents were unwilling to reveal their political inclinations.

There might be an explanation for that. Voting for the NLD is sexy, and is considered to be the ‘right choice’; a vote for the USDP, less so. It could very well be that a large percentage of those who were not willing to share their preferences are contemplating supporting the USDP, for various reasons. These range from vested interests, to unease with the NLD’s ability to govern or having family members that are employed in the civil service or military. Things are probably not as clear-cut as the prevailing media narrative suggests.

This is the skewed lens we are looking through – and the Lady is looking through the same lens. Expectations have been raised to a point where they may not be realistic. If an NLD victory is less massive than expected, it could indicate that irregularities have occurred, but it could also mean that a more accurate picture of voter preferences and concerns has emerged.

It’s difficult to peer into a crystal ball and divine precisely what the election results will look like. In any case, let’s hope the leadership of both the USDP and NLD keep their cool after what promises to be an exciting election day.

Peaceful strategies are proving the most effective at challenging military rule and the new National Unity Government should prioritise them over armed struggle.
BY Frontier