The state of the Sangha

An outspoken nationalist monk has issued a sinister warning to the incoming National League for Democracy government over one of the most sensitive issues on its reform agenda.

A few days before the new Union parliament convened on February 1, the extreme nationalist monk, U Wirathu, issued a chilling warning to the incoming National League for Democracy government.

It was a grisly video re-enactment posted on his Facebook page of the rape and murder of a Buddhist woman by Muslim men in Rakhine State in 2012. The incident triggered the eruption of sectarian bloodshed that engulfed Rakhine, and was followed by similar ugly incidents in Meikthila, Mandalay and Lashio.

U Wirathu said on his Facebook page that the video clip, titled “The Black Day”, was a trailer for a longer production that he planned to post after the NLD government assumes office on April 1.

The video was released, he said, to show the NLD government that it needed to “prioritise protecting the race and religion of the country”.

The outspoken monk said he would never give up in his effort to distribute the longer video, though a posting on Facebook might be temporary.

Late on February 1, the trailer was removed from U Wirathu’s page by Facebook, which said it had violated its “community standards”.

The carefully-timed release of the trailer has focused attention on one of the most sensitive of the many challenges facing an NLD government: the management of religious affairs.

Despite criticism of Daw Aung San Suu Kyi for not speaking more forcefully to condemn religious prejudice and discrimination, she is reviled by Buddhist nationalists over the NLD’s opposition to the four so-called “race and religion laws” enacted by the outgoing government.

As an NLD government moves to address these issues it will be considering the role of the supreme body representing the monkhood in Myanmar, the State Sangha Maha Nayaka Committee, which is under the Ministry of Religious Affairs.

The 47-member committee, which includes representatives from the country’s nine main Buddhist sects, was established by the military government in 1980 to strengthen state control over the community of monks, the sangha.

The committee enjoyed considerable influence until 2003 and 2004, when divisions emerged over whether or not to support Daw Aung San Suu Kyi. The dispute, an indication of the politicisation of some monks, resulted in ministerial intervention to exert greater control over the committee and its influence went into decline.

There has been disappointment among some prominent members of the sangha over the committee’s silence about the activities of the anti-Muslim 969 movement, which includes U Wirathu as a leading member.

“The Sangha Maha Nayaka Committee made no attempt to intervene in the conflict caused by 969 movement’s campaigns,” said U Thawbita, popularly known as the Bawa Alinn (Light of Life) Sayadaw.

“They knew who was responsible for fomenting unrest between communities and they did nothing about it,” U Thawbita said.

“Now, those monks who were involved in the 969 campaigns are back again and I hope the next government can handle it,” he said. 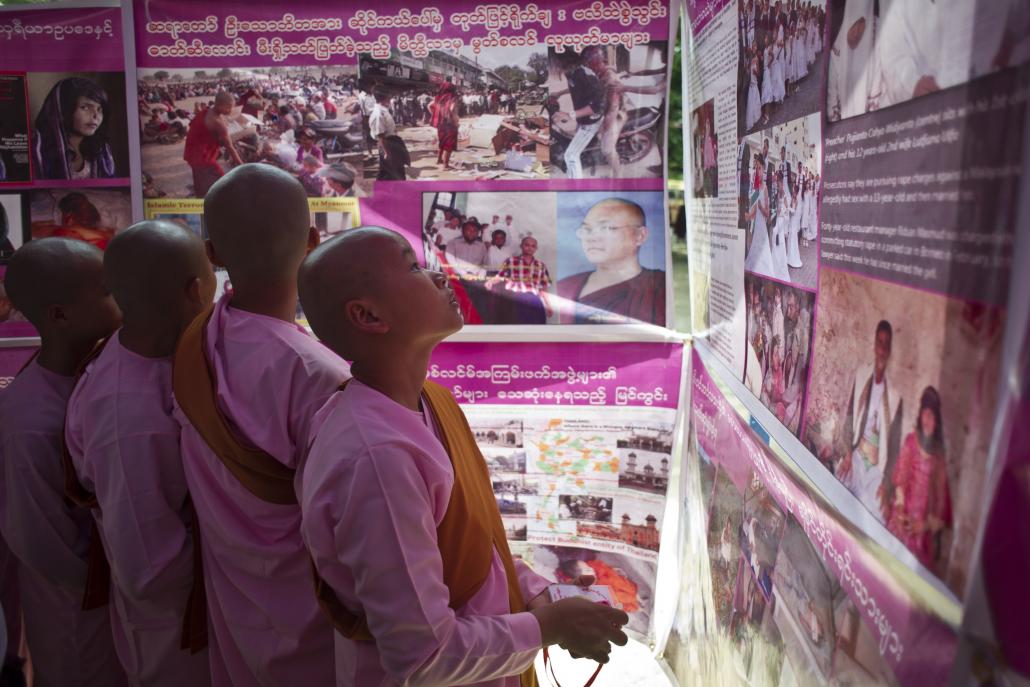 Buddhist nuns look at posters showing images of violence attributed to Muslims around the world, during a Ma Ba Tha celebration at a monastery in Yangon, September 14, 2015. (Ye Aung Thu / AFP)

U Thawbita, who expressed concern about possible sectarian unrest after the new government takes office, said the committee must be given more decision-making powers.

He also referred to appointments in the past of former military officers as ministers for religious affairs and questioned whether they were suitable for the role.

“The whole Ministry of Religious Affairs needs to be reformed,” U Thawbita said.

His concerns were echoed by another monk, Ashin Mo Thu (U Khemananda), a columnist and writer, who said legal action should be taken against monks who break the law.

“But for the last two or three years, a big party and some powerful figures are backing those monks and the rule of law has died under them,” he told Frontier.

Warning that the new government needed to be aware of the possibility of further sectarian unrest, Ashin Mo Thu also indirectly suggested it should make changes to the composition of the committee, which has its headquarters at the Kabar Aye Pagoda in Yangon.

“The new government needs to kick out some evil people from the compound of the Kabar Aye Pagoda,” he said.

The NLD government’s choice of minister of religious affairs will be critical if it is to seek the reform of the State Sangha Maha Nayaka Committee as part of any effort to foster harmonious community relations.

Sources within the party say the position is likely to go to the Deputy Minister of Religious Affairs, Thura U Aung Ko, who recently resigned from the Union Solidarity and Development Party and is known to be a supporter of Daw Aung San Suu Kyi.

“It would be better if Thura U Aung Ko could become the minister because he has been impressive as the deputy minister,” said U Thawbita.

“The ministry must not only be for Buddhism; it should be involved with all religions,” said U Thawbita.

The suggestion was supported by the Chief Convenor of the Islamic Center of Myanmar, Al Haj U Aye Lwin.

“It would probably be better if that ministry was abolished, but if it continued it should have separate sections responsible for the different religions in the country and staffed by people with expert knowledge,” U Aye Lwin said.

“Almost all the ministry’s staff are from the military and they do not know much about matters involving religions,” he said.

The legal advisor to the NLD, U Ko Ni, said Daw Aung San Suu Kyi was well aware of the concerns about the possibility of further sectarian unrest.

U Thawbita recalled a saying about democratic values and their acceptance by the people and the sangha.

“The people have got democracy, but not the monks yet,” he said.