The sacking of Bago Region minister U Kyaw Min San

The sacking of Bago Region minister U Kyaw Min San was a response to widespread discontent with the regional government, but has also revealed the NLD’s internal failings and the deep level of corruption in the bureaucracy.

U Kyaw Min San is smart and articulate. A human rights lawyer, he holds a master of laws from Hong Kong University. He is a long-time member of the National League for Democracy legal aid team in Bago Region and more recently has acted as a legal adviser to the International Commission of Jurists’ office in Myanmar.

At 40, he was one of the youngest cabinet members in Myanmar when appointed Bago Region minister for natural resources, forestry and environmental conservation in March 2016. In short, he seems like the kind of person the NLD should be trying to attract to replace its ageing leadership.

But then, in January, he was fired. Although the noticed issued by President U Htin Kyaw on January 11 said he was “permitted to resign”, Kyaw Min San is clear that he went unwillingly.

Why he was fired is unclear. He says he was the victim of personal attacks, including accusations of corruption: specifically, that he profited from illegal timber that was confiscated in Bago Region during his tenure. He said he knows who was responsible for spreading the rumours.

“I am lawyer so I know how I can respond to them but I don’t want to do it,” he said. “I was never corrupt. I believe I did my duty faithfully.”

But the accusations emerged at a time of widespread dissatisfaction with the Bago Region government’s performance and regular protests calling on the chief minister, U Win Thein, to resign. Many people interviewed for this story were critical of the government, describing it as corrupt and inept.

Ko Zaw Myo Tun, a Bago-based political activist who describes himself as non-partisan, said that Kyaw Min San was “a good guy”. “He could do his job, he is young and he wasn’t corrupt. I never heard he was connected to corruption – but we have heard some other cabinet members are involved in corruption,” he said.

He said Kyaw Min San also faced difficulties because most of his portfolio was controlled by Nay Pyi Taw.

“Kyaw Min San couldn’t really reform things because his role was very small. But we were surprised [that he was fired] – why didn’t the NLD change the Bago chief minister?”

A high-ranking bureaucrat from Bago Region said the state and region governments were more like “shadow cabinets”, with most processes and projects going through the union ministries in Nay Pyi Taw. “Nothing changes in this era. We need do more work with our head ministry than the regional ministry … It is very similar to the past.”

Kyaw Min San’s firing also highlights the strong role of the party in government affairs. In mid-2017, senior NLD official U Win Htein visited Bago Region in response to the complaints about the regional government. While the visit was aimed at improving the performance of the government, the main outcome was the sacking of Kyaw Min San and Minister for Municipal and Social Affairs U Maung Maung Lwin.

But these changes were part of a broader shakeup that saw six regional government ministers – two each in Bago, Ayeyarwady and Magway regions – lose their jobs in early January. Although the government said the ministers resigned voluntarily, Kyaw Min San said he just received a notice from the party central executive committee informing him that he had to resign, he claimed.

Kyaw Min San said that when he objected to being sacked, Win Htein responded: “Don’t complain about it. It’s a political decision.”

However, Dr Myo Nyunt, who leads the NLD complaints committee, told Frontier that the party had not received any complaints about Kyaw Min San and hadn’t conducted any investigation into his performance or behaviour.

Kyaw Min San said he wants to know exactly why the NLD ordered his resignation without conducting an investigation.

“Every voter believes in me. The party and union government should say why they made this decision. If they are transparent, people will have more trust in the party and the government.”

When Frontier interviewed Kyaw Min San, he listed a slew of achievements during his 21 months as minister. He took particular pride in his attempts to tackle illegal timber – a huge issue in Bago Region, home to the teak-rich Bago Yoma mountain range.

Under his predecessor, the regional government would typically seize between 1,000 to 2,000 tonnes of illegal timber a year. This number rose to about 6,000 tonnes in 2016-17 and 5,000 tonnes in the first nine months of 2017-18, with seizures particularly high around Pyay and Pauk Khaung townships in western Bago Region. 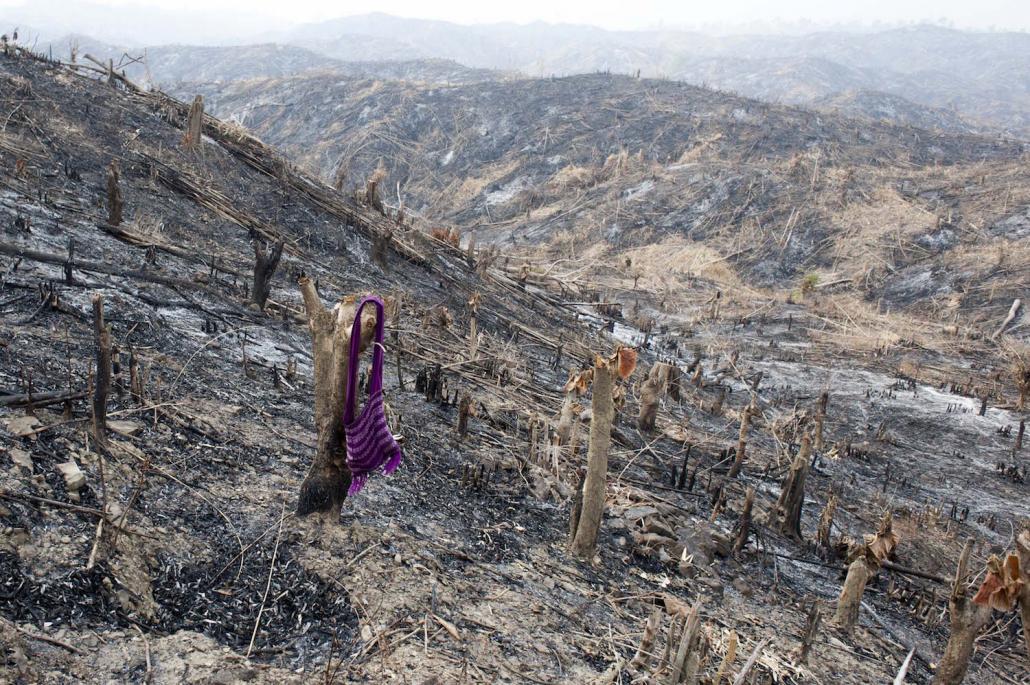 “He made a plan to tackling illegal logging in the region and appointed more forest police,” said lawmaker U Thet Min Zaw (NLD, Pauk Khaung-1). “It worked – there was a big increase in seizures, especially in my constituency.”

But it’s clear that not everyone agrees. U Thein Oo, a businessman from Pauk Khaung Township who manages 7,500 acres of community forest, said that Kyaw Min San lacked the knowledge for the job.

Thein Oo recalled that when a ceremony was held to present community forest certification to residents, Kyaw Min San did not give all of the required documents to the forest managers.

“I think Kyaw Min San didn’t have enough experience and knowledge about this sector, that’s why he was fired.”

Thein Oo added that illegal logging was still rampant in Bago Region, particularly in Pauk Khaung. The seizure figures represented just a fraction of what was being smuggled. “Now, 50 to 60 tonnes of illegal timber from the Bago Yoma are coming into Pauk Khaung every day,” he said. “Nobody can solve the illegal logging problem in Bago, including Kyaw Min San. Illegal loggers have close relationships with the regional government. It’s just the same as in the past.”

Shwegyin Township, about 70 kilometres northeast of Bago, is famous for its gold mining. The town sits in a narrow strip of low-lying land, with the Sittaung River to the west and the Kayin Hills to the east. It has long been affected by conflict, with the Karen National Union active in the area. 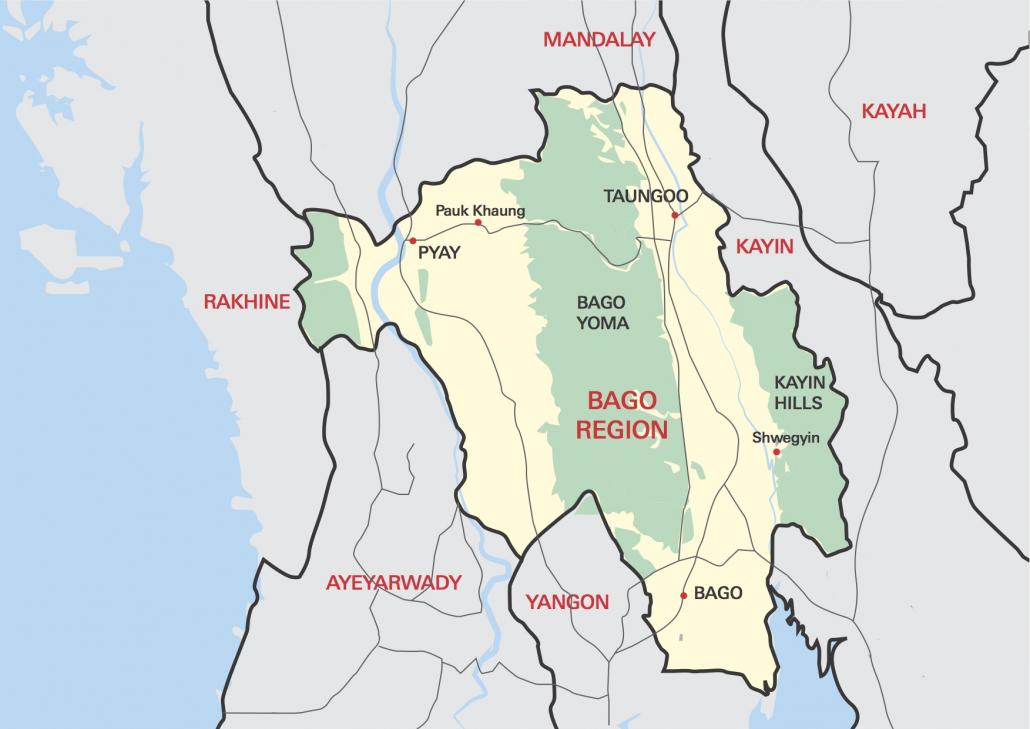 Shwegyin township sits in a narrow strip of low-lying land.

The Union government has permitted only two companies to mine gold in Shwegyin. Of these, only one is actually operating. But Kyaw Min San said his survey found there was 60 illegal small and medium sized gold mining outfits in Shwegyin.

He visited Shwegyin twice to meet the operators and discuss how they could legalise their business, but the process had not concluded by the time he left office.

“I collected a list of the companies and submitted it to the union government with a proposal on how we should solve the problem,” Kyaw Min San said.

The issue is complicated not only by Myanmar’s outdated mining framework and poor enforcement but also conflict. Most of the illegal mine operators are paying bribes not only to the Department of Mines but also the Tatmadaw and KNU. Kyaw Min San said he wanted to find a way to convert those bribes into tax revenue. So far, nothing has changed.

Lawmaker U Win Myint (NLD, Shwegyin-1) said the presence of armed groups would make it difficult to solve the illegal mining problem, but he also didn’t think Kyaw Min San had made any great effort to do so.

“He came here twice, but we can’t see any improvement over the past two years in Shwegyin,” he said.

Ko Zaw Myo Tun said the sacking of Kyaw Min San only highlighted the NLD’s inability to introduce real reform amid a highly corrupt bureaucracy.  “We have no other political party, so I will probably vote for the NLD again in 2020,” he said, “but I’m really disappointed in the NLD and their governments.”