A Yangon MP has criticised the plainclothes police involved in a nasty incident with a terrified citizen who alleges he was assaulted.

Ko Than Toe Aung points at the men in the video. “These are the guys who say they’re police and that’s the security staff,” he says. “I’m asking [security] to call the police because I didn’t know who they were. And they are like, we’re the police, and I asked them to tell me their name and ID – but they never did.”

None of the men who claim to be police are wearing uniforms. They are standing around Than Toe Aung in a hotel lobby; two have him by the arms. There’s a struggle and much yelling. A hotel security guard comes over aggressively, telling Than Toe Aung that unless he leaves immediately, he’ll be charged with trespassing. He grabs Than Toe Aung and drags him to the doorway, helped by a bellboy.

A fifth man appears in the doorway, waving a truncheon. He’s also in civilian clothes, including slippers, but wears a black waistcoat that says “POLICE” in white letters. Than Toe Aung is bundled out the door and into the back of a waiting Toyota Nadia minivan under the hotel portico. The men literally throw him in the boot, but he uses his foot to keep them from closing the door. He then rolls out and is picked up by the largest man – the one wearing the waistcoat – and thrown back in. The door closes and the van leaves.

The video, shot with a phone camera, depicts an incident that occurred at Asia Plaza Hotel in downtown Yangon more than two months ago. Although the facts – or at least Than Toe Aung’s side of the story ­– are reasonably well known and have been publicised in local media and online, it is still shocking to watch.

At about 10pm on January 18, Than Toe Aung, a 25-year-old translator and rights activist, was sitting at the corner of Bogyoke Aung San Road and 40th Street, looking at his phone. A civilian van stopped nearby and a group of men got out and ran at him, telling him to stop and not move.

Scared they might be criminals or vigilantes, he sprinted into the lobby of the nearby Asia Plaza Hotel, where the altercation in the video occurred. After the van left the hotel, Than Toe Aung alleges that the police beat him. He was taken to Kyauktada Township Police Station. His father came and paid a K100,000 bribe so he would be released.

If the police thought the case closed, they were wrong. After senior officials apparently failed to act on his complaints, Than Toe Aung publicised the incident on Facebook, with photos of the bruises and cuts he sustained in the back of the van. Kyauktada Township Police Station then responded to “the lies being spread by Than Toe Aung” and posted CCTV footage showing hotel staff removing him from the hotel.

The station account said Than Toe Aung’s injuries occurred while he was “brawling” with security. The post, which was deleted shortly after commenters noticed that the officers were not wearing uniforms, also included Than Toe Aung’s home address, ID card number and religion, and as a result he and his family have been forced to move from Kyauktada.

Later, the Yangon Police Facebook page repeated many of the same claims, including that the police who arrested Than Toe Aung were wearing uniforms. It insisted that he “was not subject to police beatings”.

But the phone camera video footage contradicts much of the police story, and backs up what Than Toe Aung said occurred in the lobby. Apparently shot by a staff member, it was given to Than Toe Aung by Asia Plaza Hotel management. 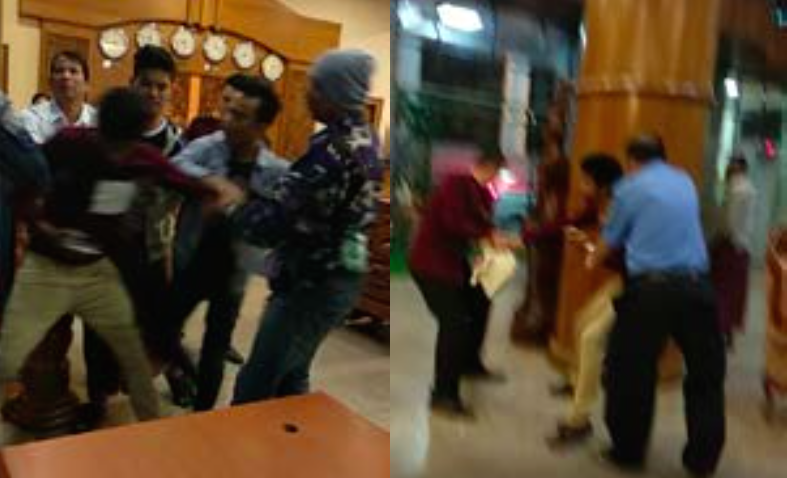 Screenshots from a mobile phone video of Ko Than Toe Aung’s arrest, taken in the lobby of the Asia Plaza Hotel. (Supplied)

This was not an act of charity; the hotel apparently hoped that by assisting Than Toe Aung he would keep their name out of future media coverage. “They said … from now on, pretend we don’t know each other, and we’re no longer in this case any more, you cannot use our hotel name any more.”

Regardless of the motive, Than Toe Aung is thankful that the person in the lobby, whoever it was, decided to take out their phone and record the altercation. “It’s not a very Myanmar thing to do … here, they’re scared of police and I’m quite surprised he filmed it,” he said.

A local lawmaker, Daw Kyi Pya (National League for Democracy, Kyauktada-1) was also present when the hotel handed over the footage. She said the township police force had told her that three of the police involved were transferred, but she was unaware of the status of any official investigation.

She said that although police can operate in plainclothes they need to follow the law. “In this case the police were not smart – they really looked like gangsters, like a group of people who were trying to beat him up,” she said.

Official investigations are ongoing; Than Toe Aung and his father have both provided statements and evidence to Kyauktada police station, but its probe has since been taken over by Yangon’s Western District Police Station. Kyauktada police station referred questions to the Western District office, which referred questions to the Yangon Region Police Force spokesman, who did not answer his phone despite many calls.

More recently, the Myanmar National Human Rights Commission has begun looking at the incident. However, Than Toe Aung says he’s not hopeful of a positive outcome from any of the investigations.

“It’s not transparent; I haven’t received any further explanation. [The police] said it could take up to three months, which is ridiculous.”

Asked how he thinks the police officers feel about the incident now, he pauses.

“Now that I’ve come back and gone public about this assault,” he says, “I think they wish they killed me – or at least put me in jail and covered up their story.”

Speaking up has made him a target but Than Toe Aung says he was always aware of the likely consequences. As a rights activist, he felt that he had a “moral obligation” to take a stand.

“If I don’t speak out, I’m pretty sure those perpetrators will continue going around patrolling like that and continue giving people trouble. So I feel I need to speak out – I want change.”

TOP PHOTO: Ko Than Toe Aung says he is not hopeful that the investigations into the circumstances surrounding his arrest will lead to a positive outcome. (Steve Tickner | Frontier)