The NLD’s new chapter in propaganda

Reports focused on the activities of the powerful were a regular feature of state-run media under junta rule, and there is disappointment that little seems to have changed under the National League for Democracy.

For those with long enough memories, the state media report on the opening of an electrification project at Sonekwin village tract in Mandalay Region’s Mahlaing Township seemed straight out of the junta era.

In those days, the state-run media excelled at boring its readers and viewers with images of generals participating in activities ranging from raising the ceremonial metal parasols known as hti that grace the tops of pagodas, to observing immunisation campaigns for children.

The report and its photographs were posted together on the MOI Webportal Facebook page controlled by the Ministry of Information early in the New Year. The dignitary was the powerful National League for Democracy central executive committee member U Win Htein, 76, the party’s gruff official spokesperson.

The saturation coverage of Win Htein drew some scathing responses.

“Has the Ministry of Information decided to canvass for votes or become campaign headquarters for the NLD?” a user named Ko Phyo wrote on his Facebook page. A vendor sells copies of the state-run Kyemon newspaper under the Shwegonedaing Flyover in Yangon. (Teza Hlaing / Frontier)

During the decades of military dictatorship, the junta used the state-run media to publish glowing accounts highlighting its activities and those of its leaders rather than reporting news of genuine interest to the public.

After the national uprising in 1988 and the dishonoured election in 1990, won by the NLD in a landslide, the New Light of Myanmar – as it was known before it changed its name in 2014 – and its vernacular counterpart, Myanma Ahlin, often published vicious attacks on the junta’s nemesis, Daw Aung San Suu Kyi, accompanied by grotesque caricatures. The NLD leader, whose late husband was British, was denounced as a puppet of the West, and worse.

Since the change of government, Myanma Ahlin and the Global New Light of Myanmar have been referring to Aung San Suu Kyi as a democracy icon, but it took a while for the reality of the NLD’s election victory in 2015 to be accepted by state-run media.

For example, the GLNM’s front-page lead story on November 14, 2015, was about the election contributing to a sharp rise in newspaper and journal (weekly newspaper) sales. Buried under the lead story on page 3, about Vice President U Nyan Tun meeting a visiting Japanese delegation, was the most important story in the edition. It was headlined: “NLD wins general election”.

Since the NLD took office, the performance of state-run media has been hugely disappointing for those who were hoping it might begin to report the news based on its national or international importance, rather than focus on powerful personalities.

Expectations that the state-run media would become more professional in its ability to assess what makes the news had risen after journalist, writer and publisher Dr Pe Myint, 67, was appointed Minister for Information in the NLD government.

Pe Myint, the former chief editor of a well-known and respected political journal, Pyithu Khit (People’s Age), is on record as saying that previous governments used state-run media as a propaganda weapon.

After being appointed minister, he caused widespread dismay in media circles when he said at his first meeting with the Myanmar Press Council that there was no reason why the government should not continue to publish newspapers.

“I was shocked when I heard him say that,” said U Zayar Hlaing, editor of the Mawkun magazine.

Zayar Hlaing, who has been a journalist for more than 10 years, criticised state-owned media for giving priority to the activities of those who hold power. Since the change of government in late March last year, Myanma Ahlin has published many glowing reports about Aung San Suu Kyi and the ruling NLD, he said.

He rejected suggestions that editors might be doing this to curry favour with their superiors. “Having top-ranked officials from the NLD in the state-owned newspapers is a way of showing where the power comes from,” he said. “This is not a new method; the military did it too.”

This change was evident almost from the start. In April, the first month of the government’s term, Myanma Ahlin wrote about the NLD more than 20 times but did not mention any other political party.

U Tin Ye, spokesman for the National Unity Party, said state-owned papers had rarely published news about parties other than the NLD since it took power.

“Even though we send news about the NUP to state-owned media, it is never published; the situation is worse than in the time of President U Thein Sein,” Tin Ye told Frontier.

“In the news bulletins of the MOI, there is not a clear distinction between the activities of the [NLD] and that of government departments,” he added. 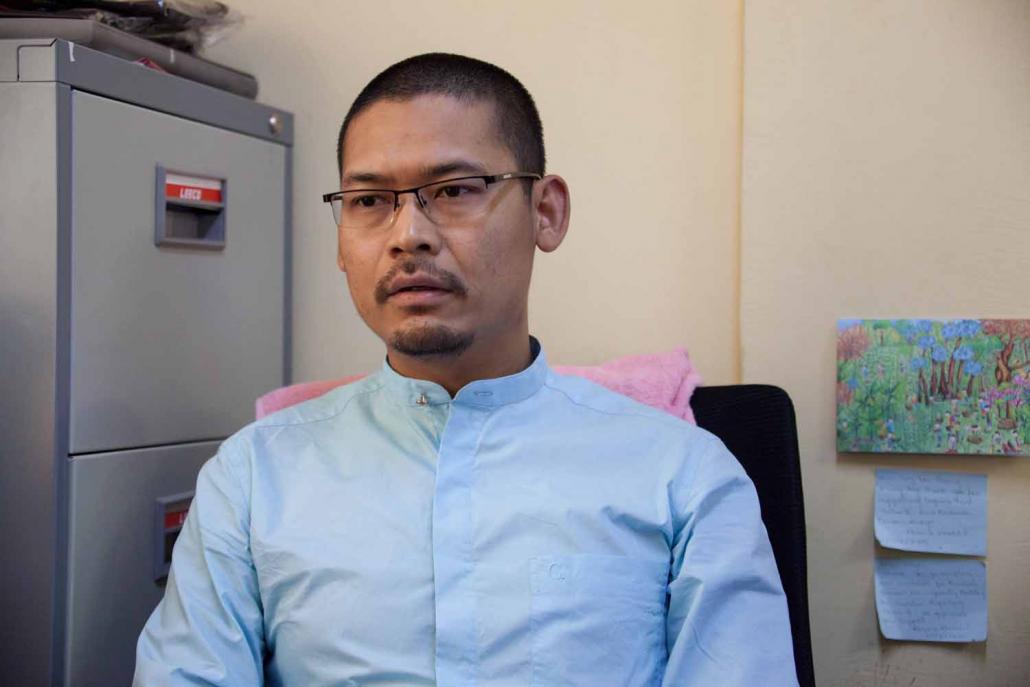 U Zayar Hlaing, the editor of Mawkun magazine, speaks to Frontier at his office in Yangon on January 5. (Theint Mon Soe — J / Frontier)

Frontier emailed an interview request to Pe Myint on January 5 but it was declined. His office suggested that Frontier contact the government’s News and Periodicals Enterprise.

NPE spokesperson U Ye Naing said that the major change in policy at the state newspapers was a focus on “news value” in reporting, which meant covering NLD activities if they were deemed newsworthy.

This contrasted with the policy under the Thein Sein government, during which the Ministry of Information did not cover the activities of the Union Solidarity and Development Party.

“We were very careful not to publish about the USDP under the former government because it could be seen as promoting a party,” he said. “Now we choose to cover an event if we believe it is newsworthy.”

He declined to answer whether the Win Htein post could be considered propaganda for the NLD.

U Khin Maung Kyaw Din, chief editor of state-run Kyemon, said the newspaper’s new focus on news and greater editorial freedom under the NLD had pushed circulation up to almost 200,000 copies a day, which he claimed was a 60-year high.

He defended covering party activities. “The government must inform the people of its actions and because the NLD was able to install a government, the state-owned newspapers are covering much about the NLD,” he said.

Editorial decisions rest with the editors, added Khin Maung Kyaw Din, who has been working in the industry for more than 40 years.

“We are allowed to cover any subject except sensitive issues such as race and religion.”

But coverage of these “sensitive” issues has also attracted significant criticism.

The government has used its newspapers – particularly the English GNLM – to respond to international criticisms and allegations regarding events in Rakhine State. Its editorials and opinion pieces have suggested Rakhine State’s Muslim community is a “thorn” that “has to be removed” and its members are “detestable human fleas”.

Foreign journalists and human rights groups, meanwhile, have been working “hand in glove” with terrorists, it has said. At the same time, “news” reports in the paper extolled conflict-hit Maungdaw Township as a land of “golden paddy fields” and “scenic” mountains.

Similar allegations have been made over state media coverage of ethnic conflicts. Kyaw Kha, a senior reporter from the Irrawaddy who has been covering conflict since 2009, said coverage of the country’s civil wars was no different than under the Than Shwe and Thein Sein governments. Many reports on conflict in the state media come directly from the military’s Myawady news agency, he added.

“State media are at their worst when covering news about conflict and ethnic armed groups. They just publish Tatmadaw press releases and never ask the other side to get a balanced view,” he said.

Sai Tun Aung Lwin, an editor at The Ladies News Journal, which has published more than 500 conflict stories since 2012, added: “I think Sayar Pe Myint can’t decide anything without central government (approval). They said their goal is democracy but their ‘news’ looks like propaganda. It’s not good for national reconciliation.”

The minister, Pe Myint, did reveal something of his plans for the media when he outlined the Ministry of Information’s achievements in its first 100 days since the change of government at a briefing for journalists in Nay Pyi Taw on August 23.

Ironically, given his apparent reluctance to be interviewed, Pe Myint reportedly began the briefing by saying the ministry had conducted training and workshops for ministerial spokespersons so they could successfully carry out their tasks of releasing information to the public.

He also said the ministry was amending the Television and Broadcasting Law to turn state-owned MRTV into a “public service broadcaster”, and mentioned plans to issue new television licences.

He spoke of the courses conducted by the ministry’s Information and Public Relations Department at 93 libraries, including in English proficiency, storytelling, computer training and sewing and discussed plans for paper reading sessions aimed at improving the quality of literary translations and the literature of ethnic minorities.

“As of April 1, 2016, the two state-owned [Myanmar-language] dailies, Myanma Ahlin and Kyemon, have opened a new chapter by improving their content and display,” he was quoted as saying.

“A copy of the two papers in the Myanmar language costs about K131 to produce, but is sold for K50 at newsstands for the public good, not for profit,” he said.

The minister did not define “public good”.

But to many observers, it seems to be little different than what is good for the NLD and its government.

“The previous government used them,” he said. “If you do it when you take office, the next government might do it, too.”