The next level for Myanmar's game makers

THREE YEARS after the market opened up, Myanmar’s mobile revolution shows few signs of slowing down. At the end of 2016, Myanmar had 14 million internet users, an increase of 97 percent on a year earlier, according to the Digital in 2017 report released by social marketing firms We Are Social and Hootsuite. Of these, 13 million were monthly active social media users.

The potential for further growth in internet usage is clear. Myanmar has 50.3 million active mobile subscriptions, of which 55 percent access 3G or 4G internet.

A London Stock Exchange-listed technology company, MySQUAR has been focused on filling this gap for several years. It started publishing apps and games in Myanmar in 2015, both in-house productions and localisations of foreign titles.

The company is taking a big bet on the Myanmar market. Pham said it will be MySQUAR’s sole focus for the next three years.

“We are optimistic in the continuous growth of the Myanmar market in the next decade,” he said. 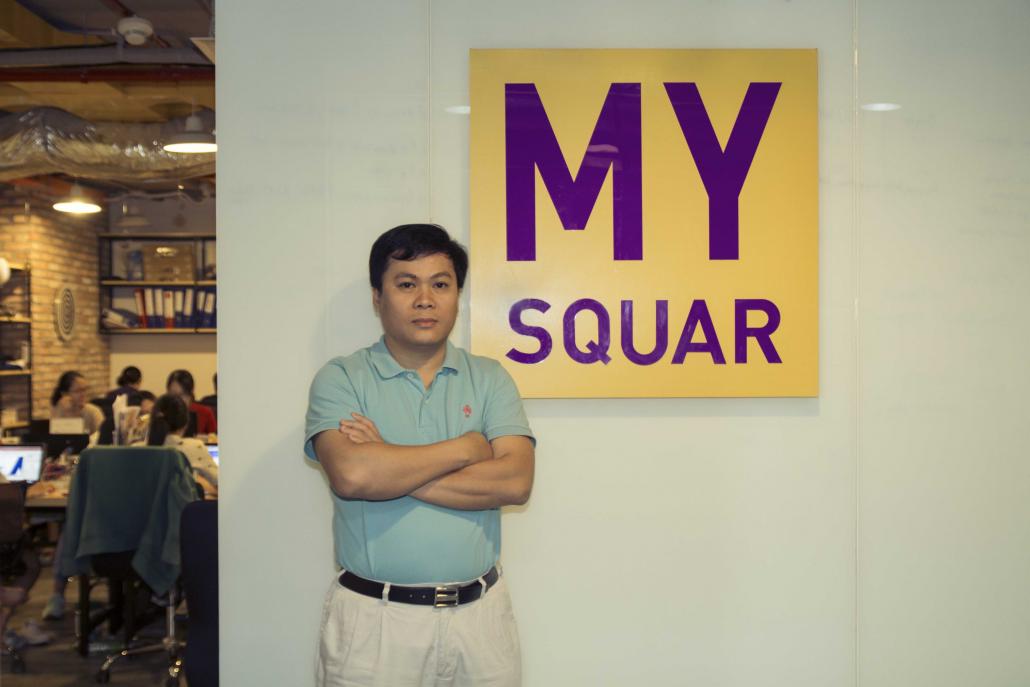 The lack of Myanmar-focused applications represents a massive opportunity for gamemakers based inside and outside the country. Like MySQUAR, they see great potential in the market, particularly as telecoms infrastructure and data speeds improve. But they also expect more intense competition in the years ahead.

Then in his free time he developed Shan Koe Mee and released it on Facebook. The digital adaption of a popular card game, it became a surprise hit. In just two weeks it gained 10,000 players – at a time, he notes, when SIM cards cost hundreds, if not thousands of dollars.

He quit his job and moved back to Myanmar, establishing mobile game developers Studio AMK, of which he is chief executive officer, in June 2013.

“From the Facebook game, I could see there was huge potential for making games. My parents did not believe being a game developer was feasible, but I insisted on starting my game business,” he told Frontier.

Another local game studio is Joy Dash, which focuses on educational products. So far it has released titles to match the four subjects that Myanmar children study in grade one, but plans to release 44 games tailor-made for students at all primary, middle and high school levels. 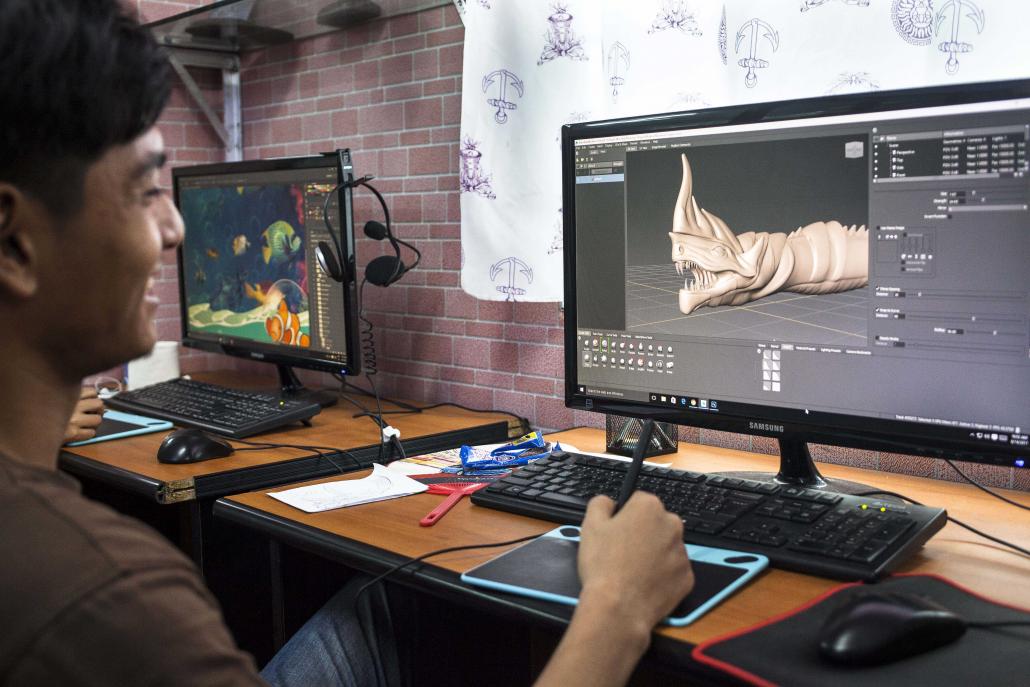 Before starting the firm, he studied game development in the United Kingdom and worked for 18 months at Code Monkeys, which creates games for the Nintendo DS.

Asked why he gave up his job abroad and returned to Myanmar, Thet Naing Swe said only, “This is my own country. I want to open a game company in the nation I come from.”

The games made or published by Joy Dash, MySQUAR and Studio AMK all employ a “freemium” income model, which allows users to play the basic game for free while paying a certain amount for advanced skills, custom characters, additional levels or functions, and game credits.

In other countries, these in-game purchases would be simple: the user would make a credit card payment via the Google Play Store on Android or App Store on iOS. The lack of credit cards in Myanmar means game studios and publishers need to consider alternatives.

But the process has been made much easier by the introduction of mobile operator Telenor’s open standard API platform, which developers can integrate into their products to facilitate payments. 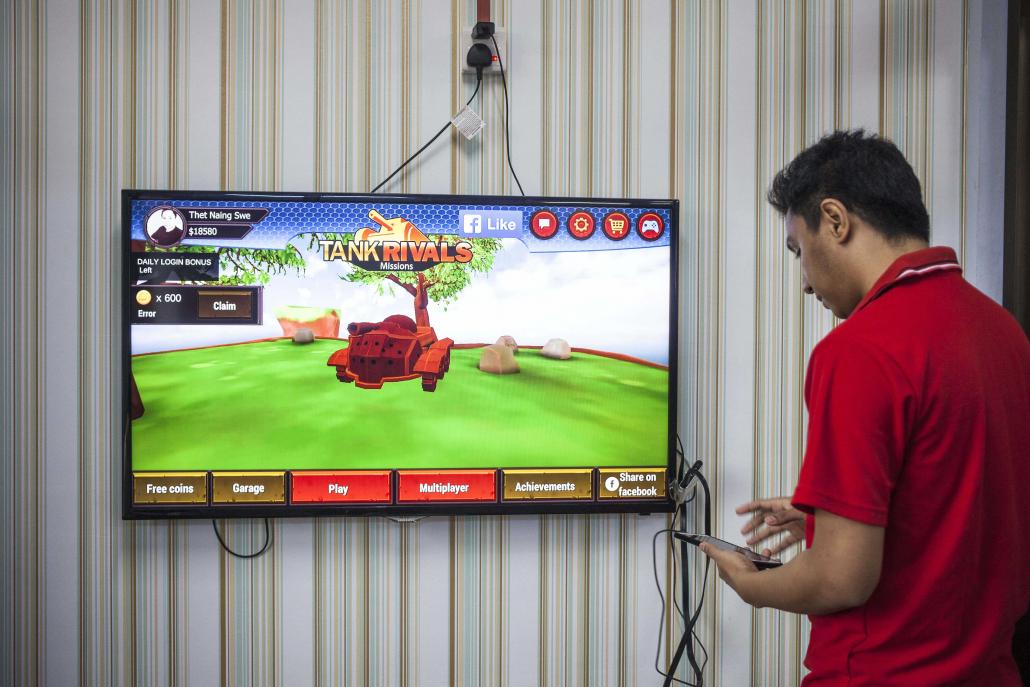 Where Shan Koe Mee users once had to go to their corner store to buy GCoins, they can now purchase them through a single tap of their phone, with the amount deducted from their prepaid credit.

Thet Naing Swe of Joy Dash said mobile payment technology had given a huge boost to his business.

But he said it’s not just about generating revenues from gamers: Joy Dash has embedded an advertising platform into its games and is setting up a dedicated marketing team to sell ads.

He said he expects the digital mobile payment market to “grow exponentially over the coming years”, with games the main driver of payments.

While the telecommunication and payment infrastructure is ready, Aye Maung Maung Kyi and Thet Naing Swe both say that the country’s human resources have failed to keep up.

Unlike Singapore or the United Kingdom, there is no degree programme in game development at universities in Myanmar; all they offer is a theory-centric computer science subject.

“There are some private schools offering courses, but they are of very elementary levels,” Thet Naing Swe said.

At the same time, the few well-trained developers are highly sought after.

“We have been hiring for two years,” says Thet Naing Swe. “We used to have three programmers in our team, and even that wasn’t enough … but they left three months ago and now I am the only one.”

While some of the developers at Studio AMK have studied abroad, most were taught how to write general programs rather than games.

“It can take up to one year to transform a software programmer into a good game developer,” Aye Maung Maung Kyi said.

As it expands its team in Yangon, MySQUAR is also on the lookout for talented programmers, Pham said.

He said having more local staff would help the studio better localise content and understand the needs of Myanmar people.

While offering potential for local developers, the internet has also allowed easy access to games from around the world. Blockbusters like Candy Crush and Clash of Clans are popular in Myanmar.

One example is Mahar, an online multiplayer action game that is based on Myanmar historical figures and myths. It is currently in development at Studio AMK.

But developers are also reimagining Myanmar’s traditions by, for example, adding modern elements to the soldiers’ armour and redesigning the appearance of legendary characters.

“It’s like Lord of the Rings,” Aye Maung Maung Kyi said. “We refer to the tradition and modernise it.”

But there’s an additional challenge for Myanmar developers, and anybody involved in creative industries here: protecting their intellectual property.

It’s something Aye Maung Maung Kyi learned the hard way. When Shan Koe Mee became a success, several clones appeared and there was nothing he could do.

“Even though a copyright law does exist, the punishment is light and there is no enforcement,” he said.

Given the rapid growth in mobile phone use, Pham from MySQUAR said he expects other players from Hong Kong, Singapore and Vietnam will soon try to enter the market.

“Our advantage is our early entry to the market,” he said. “We learn from our experience over time to understand the preferences of Myanmar users.

“Myanmar is an exciting place to be with a large youthful population, fast GDP growth and rapid advancement within the mobile industry. … This is the right time to be here.” 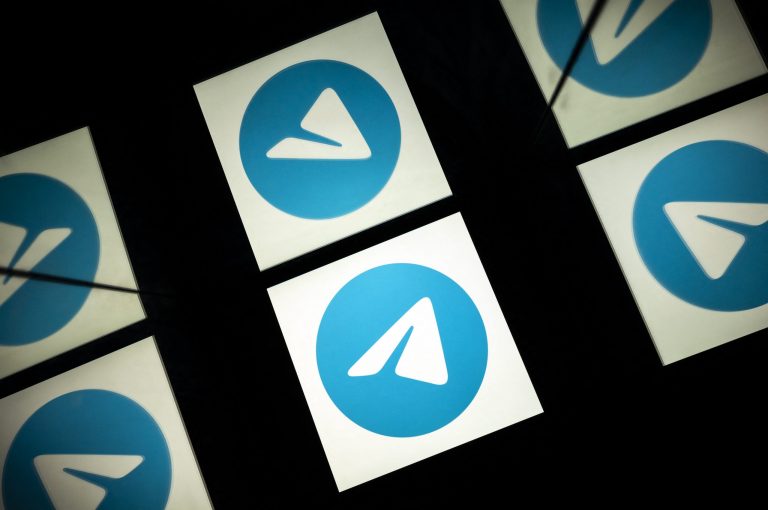