The National League for Democracy government is under fire from the business community over the delay in releasing a detailed policy for managing the economy.

It is nearly eight months since the landslide election victory by the National League of Democracy, and almost three months since it assumed power. In that time it has negotiated with the military over the constitution, nominated a proxy president, sworn in a cabinet, rebooted the peace process, taken the initiative on Rakhine State and drafted 100-day plans for each ministry.

But so far there has been no detailed economic blueprint from the government. Although the NLD insists such a policy is imminent, economic issues appear to be taking a backseat to political concerns – with the delayed formation of the Myanmar Investment Commission just one example.

And the business community is getting restless.

“Managing the economy is very important for the country but I am not aware of the NLD saying anything about economic policy since it won the election,” prominent tycoon Dr Sai Sam Htun, chairman of Loi Hein Co Ltd, told Frontier. “It is very hard to do any business without any detailed economic policy from the government.”

Sai Sam Htun was speaking at the Myanmar Summit held by the Economist magazine in Yangon on June 16, where he also expressed his concern publicly during a panel discussion.

“We have worries, we have doubts, we can say that we have uncertainty; I am very confused,” he said during the discussion. 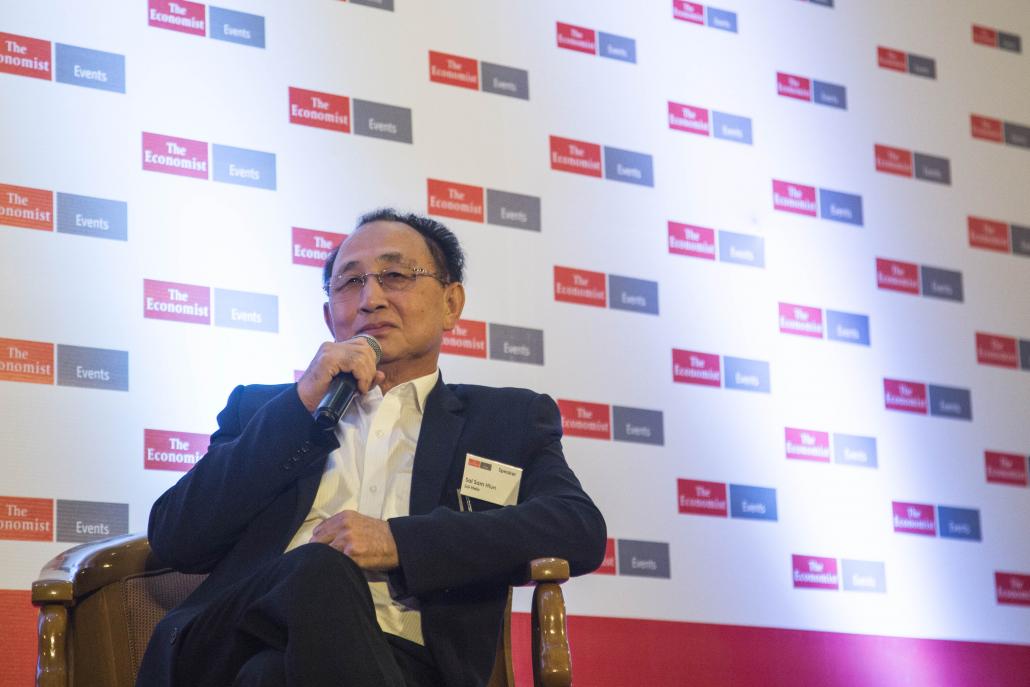 Sai Sam Htun seemed to be summarising concerns that had been building for some time, and was not the only one to express them that day. Charles Goddard of the Economist Intelligence Unit said in his opening remarks that it was “worrying” that the government had revealed little about what it planned to do during its five-year term.

He said that a number of ministers had been invited to speak at the summit, but none attended.

A few days prior to the Economist conference, Minister for Planning and Finance U Kyaw Win had met leading members of the country’s peak business organisation, the Union of Myanmar Federation of Chambers of Commerce and Industry, to hear their views and suggestions on economic management.

The UMFCCI had arranged for the leaders of groups representing 18 business sectors to speak at the event, but the minister left after hearing the opinions of just six speakers.

Surrounded by reporters as he was leaving, Kyaw Win said he could not discuss the government’s economic policy in detail as it was yet to be officially approved.

“The new policy will be made public this month at the earliest,” he said, adding that it would give equal opportunity to all Myanmar citizens.

Some businesspeople were angry they did not have a chance to speak in the minister’s presence because of his early departure from the event and vented their frustrations in posts on social media.

Foreign businesses had a similar experience earlier in the month, when a delegation from the American Chamber of Commerce in Singapore visited. Kyaw Win attended a meeting with the AmCham delegation at the UMFCCI, but did not speak and walked out midway through.

These were prime opportunities to reassure the local and foreign business community, yet the government opted instead for silence – a policy that has only served to heighten uncertainty.

But NLD officials insist a more detailed economic policy document will likely be issued at the end of the month. U Hanthar Myint, a member of the NLD’s economic committee, told Frontier the policy would be based on the draft macroeconomic policy released before last year’s election. That policy statement covered 45 points, but gave mostly broad statements of intent and no detailed plans.

“As mentioned in the party’s election manifesto, the agriculture sector will be the first priority but the detailed management plan, implementation and budgets all depend on government decisions.”

Dr Sean Turnell, a specialist on Myanmar’s economy at Macquarie University in Sydney and an adviser to the NLD, says there are good reasons for giving priority to developing the agriculture sector.

“Agriculture is not just the source of the livelihoods for about 70 percent of the population, it’s also the area in which the quickest improvements in living standards can come,” Turnell told Frontier.

“The growth potential is very strong with the right inputs, access to credit, and diversification into high value-added products such as fruits and vegetables.

“Likewise, infrastructure is incredibly important. Improving infrastructure itself generates employment and fuels growth, but it is also a growth multiplier and enabler for other sectors too. Nothing could be more important for agriculture, for instance, than better rural roads. Infrastructure is all about market access, the main game for any economy.” 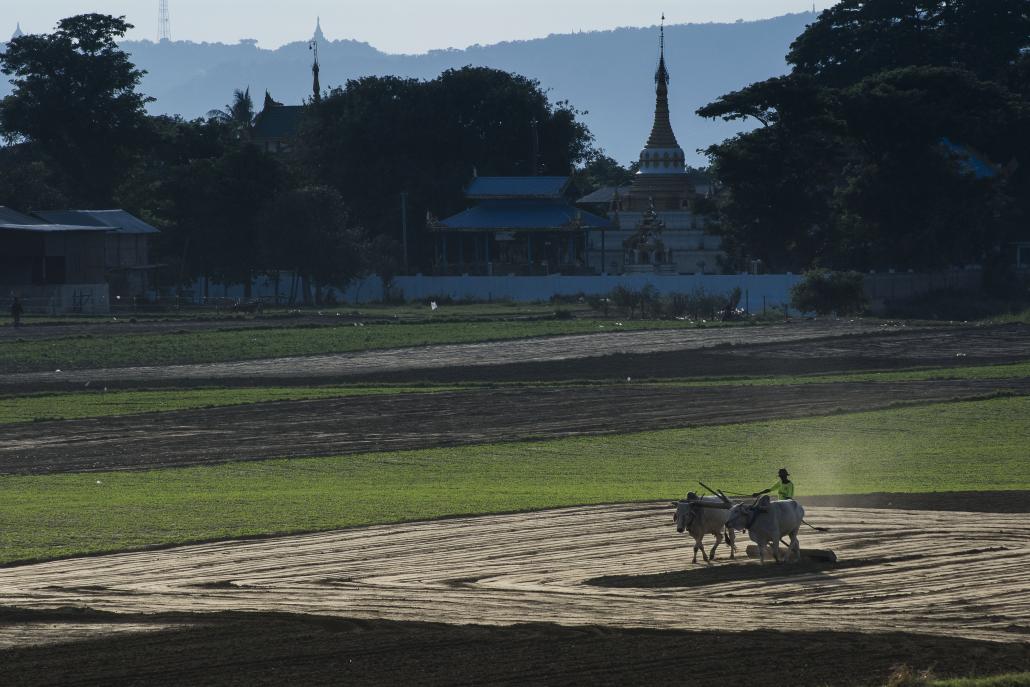 NLD officials have also stressed the need to get a clear picture of the economy before charting a path forward. On this front it could be receiving more cooperation from businesses. The UMFCCI event on June 13 was designed so that they could give suggestions to the government, but most just spoke of the need to cut taxes.

But the lack of information extends well past perennially murky areas of the economy like the black market and corruption. Turnell said the government has even been grappling to understand the true state of the country’s public finances. One example: It doesn’t have reliable figures for international debts.

He said the NLD was devoting significant resources toward overcoming these challenges.

“Much of this initial period has been spent finding out what the true situation is with the economy,” he said.

“The NLD has great people, working hard, as well as the support of millions who before had to be silent. Information flows are better than they have been for 50 years in terms of the economy.”

The planning delays were not necessarily deterring foreign investors, said Ms Erin Murphy, founder of Inle Advisory Group. Foreign businesses have been in wait-and-see mode since before the election, and this has not yet changed.

She said the forthcoming policy will be important for outlining key NLD priorities, and businesses will try to read between the lines to determine if the government is open to foreign investment. “For example, businesses will look for signs of protectionism, levels of regulation and requirements tied to their investment,” she said.

But aside from seeking policy guidance, they will put the government’s actions under the microscope. Key indicators will be how it manages the backlog of investment applications at the Myanmar Investment Commission, and if it continues to suspend projects, review other approved projects or make sweeping changes to whole industries.

“While most of this comes from a good place, it could have a chilling effect on investors that may be concerned that an approved project could be upended, even if their intentions are to be transparent and to bring a high level of corporate stewardship to the project,” Murphy said.

Despite the frustration from within the business community, optimism remains high that the NLD government can unleash the country’s economic potential.

Another prominent tycoon, Mr Serge Pun, told the Economist summit that he believed the issue was one of communication rather than ability or resources. He said the forthcoming policy would clear up any uncertainty about the NLD’s economic plans.

“Daw Aung San Suu Kyi seems to have adopted a policy of no one speaks before we know what we’re going to say,” said Pun, who chairs First Myanmar Investment, SPA Group and Singapore-listed Yoma Strategic Holdings. “So far when she has announced a plan it has been very, very clear.”

Taking slightly longer to put in place the right policy plans would pay off in the long run.