The life of a Kachin soldier

Despite recent fighting around Laiza, morale remains upbeat for the KIA soldiers on the frontline – but many still dream of returning to a normal life when the guns of war eventually fall silent.

Starting at 5am, in temperatures of just a few degrees Celsius, the troops conduct their training for almost two and a half hours.

These are not fresh recruits, but seasoned soldiers who have been brought to Laiza from elsewhere in the state for advanced warfare and weapons training ahead of what could be a protracted period of fighting between the KIA and the Tatmadaw.

Although fighting has largely subsided in recent months amid heightened conflict in other parts of the restive north of the country, government troops are now stationed within a few kilometres of Laiza, heightening fears among the local population that they will eventually attempt to take control of the town. 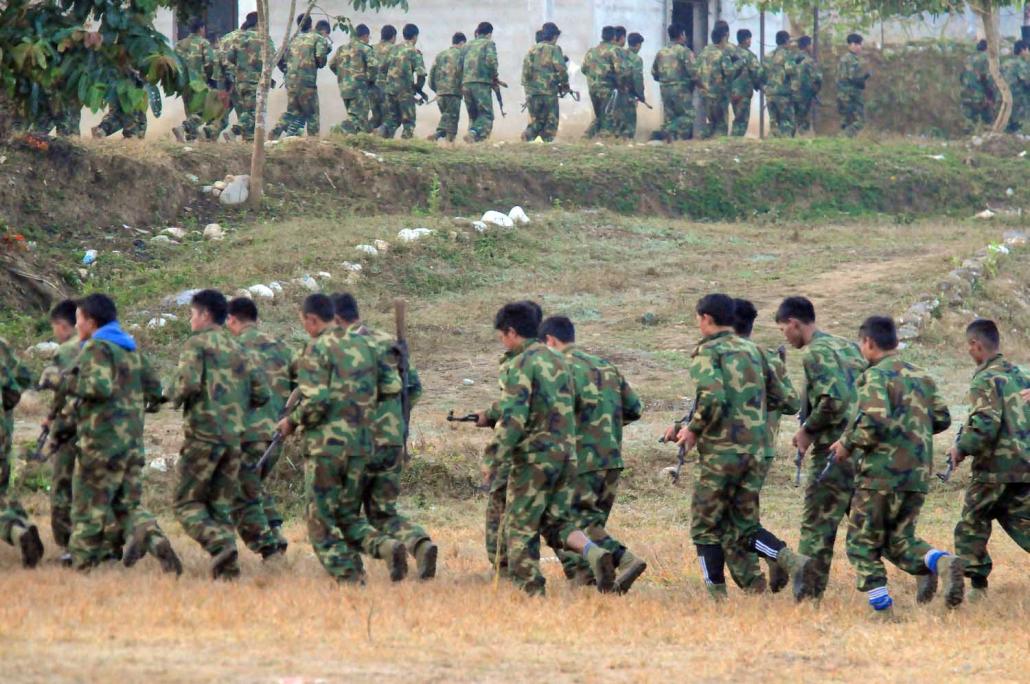 Soldiers from the Kachin Independence Army train at a facility in Laiza. (Steve Tickner | Frontier)

At the end of last year, the Tatmadaw captured several key KIA outposts close to Laiza, most notably the strategically important Gidon outpost, which fell on December 16 after four months of heavy fighting.

The KIA suffered heavy losses in the fighting. During a visit to Laiza in January, Frontier attended a memorial service for Captain Nsang Brang Htun, originally from the mountainous Putao Region of Kachin State. He was killed in fighting about 40 kilometres (25 miles) north of Laiza on January 10. At the service, Nsang Brang Htun, who is survived by a wife and five children, was described as having sacrificed his life for the Kachin people.

The lull in hostilities around Laiza appears to be linked to heavy fighting between the Tatmadaw and a joint operation from the Myanmar National Democratic Alliance Army and the Ta’ang National Liberation Army in Kokang Region. Since the fighting began on March 6, the Tatmadaw has reportedly suffered considerable losses. 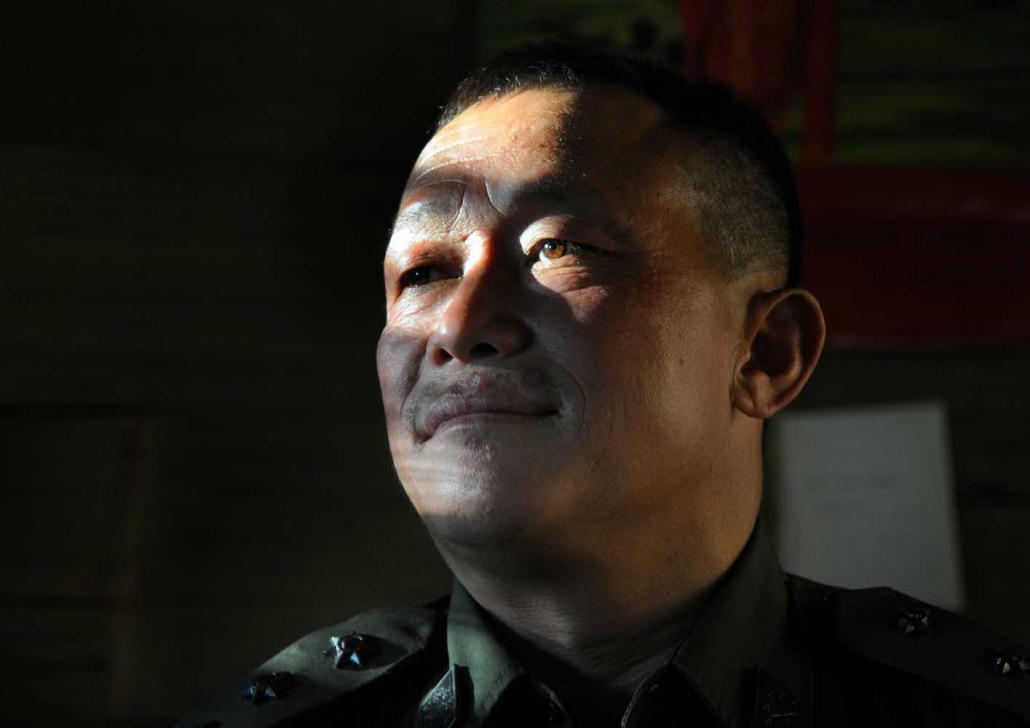 Hpawdaw Len Awng, 47 years old and a 27-year veteran of the Kachin struggle, at his frontline outpost of Lawa Yang, a few kilometres south of Laiza. (Steve Tickner | Frontier)

Back at the Kachin training camp, the soldiers practice drills that help to keep them warm in the biting cold. One exercise involves carrying their Kalashnikov assault rifles, which have been weighted with sand-filled water bottles, at shoulder height for an extended period. The activity is broken up with 100-yard sprints, push-ups and other exercises.

Despite the hard graft, the mood among the men is relaxed and friendly. When a soldiers falls to the ground he is good-naturedly chastised by his comrades and officers.

After finishing their training session, the soldiers have a hot, basic breakfast. The rest of their day is made up of more training and classes until early evening, before lights-out at 9pm. For these soldiers, the training lasts for a month.

One of the many KIA soldiers battling to keep control of Laiza is Captain Hpawdaw Len Awng, who Frontier interviewed at the Lawa Yang hill outpost he is stationed at, in the Kachin hills about 10 kilometres from Laiza town. 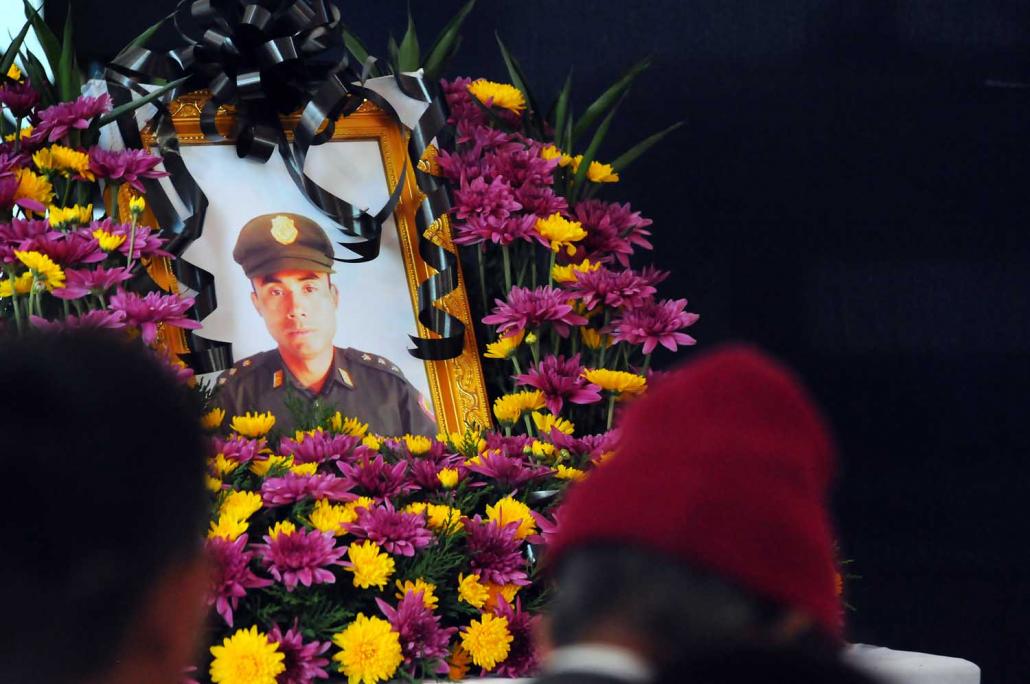 A memorial service in Laiza for Capt Nsang Brang Htun, who was killed in recent fighting 40 kilometres north of Laiza. (Steve Tickner | Frontier)

Pointing towards a Tatmadaw outpost a few hundred yards across the valley, he told Frontier: “On Christmas Day they fired mortars across at us; Merry Christmas! And on New Year’s Day, they did the same; Happy New Year! The Tatmadaw soldiers are now mostly silent but from time to time they shoot at KIA soldiers they see moving around, and occasionally launch mortar rounds towards us.”

He is married with four children, the eldest a daughter aged 16, followed by a 13 year old son, an 11 year old daughter and, the youngest, a daughter of just 13 months. Asked about the age gap between his third and fourth children, he said it was due to the war and his service in the KIA. His family live in the Woi Chai quarter of Laiza, and he occasionally gets to return from the frontline to see them. 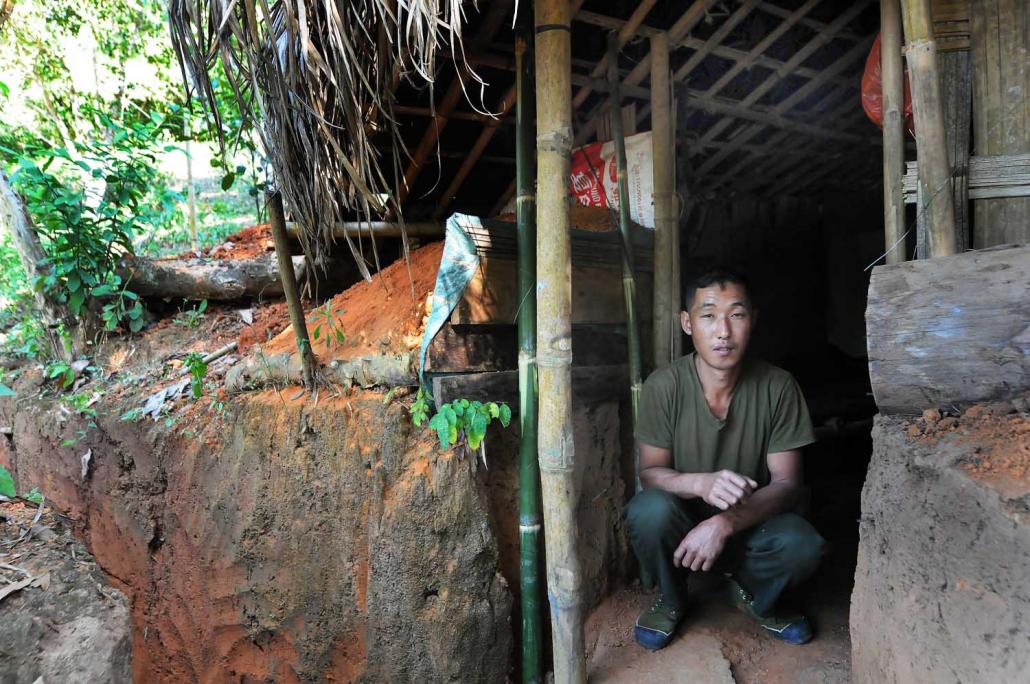 Despite some concerns for his family, Hpawdaw Len Awng said he is committed to the task of “bringing peace for the Kachin people”.

“It is the same for all Kachin people. We need to be patient until we reach our goal, because this been a long struggle going back even before my time,” he said.

Fighting between the KIA and the Tatmadaw goes back several decades. The two groups signed a ceasefire in 1994, but that ended in June 2011 when fighting resumed close to the town of Bhamo. 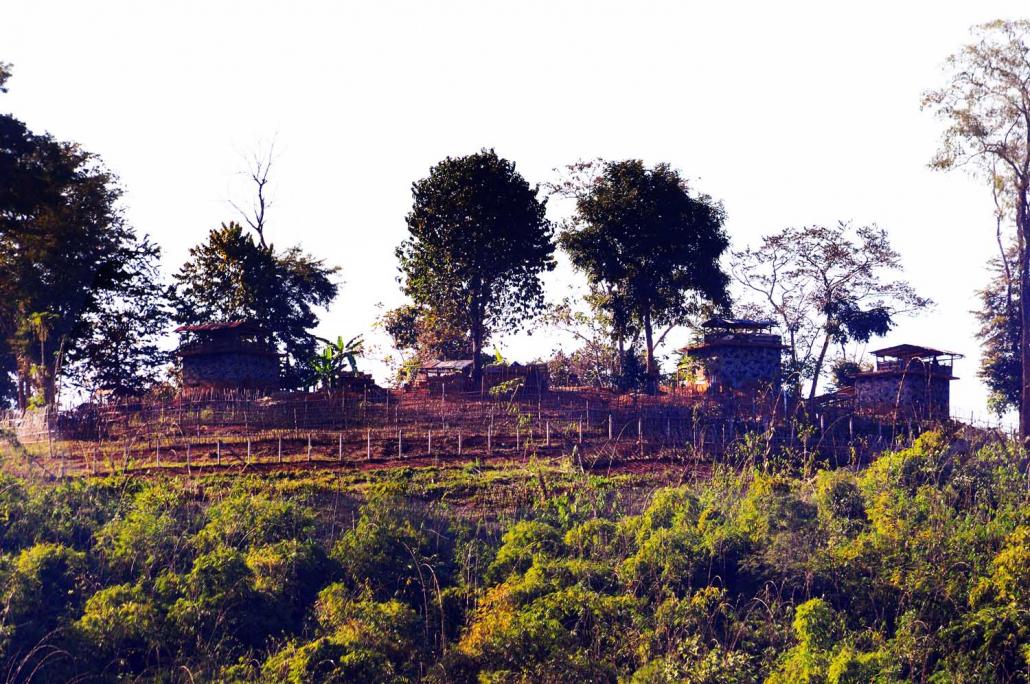 According to Hpawdaw Len Awng, there is disappointment among Kachin people that State Counsellor Daw Aung San Suu Kyi has made little progress on the peace process since her government came to power just over a year ago.

“We Kachin cannot support Daw Aung San Suu Kyi, because she is not being responsible in her job. The war is ongoing,” he told Frontier.

If the fighting does eventually come to an end, Hpawdaw Len Awng said he would like to return to a “normal” life working in administration for the KIO, a role he had before joining the KIA.

“When I was younger, it was my ambition to go abroad and get an education to university level, and then return to Kachin,” he said.

As his eldest daughter nears working age, Hpawdaw Len Awng said he expects her to pursue a career with the church, a relatively common career choice for many people in deeply devout Kachin.

“But if any of my children said they wanted to join the KIA, then it would be their decision. I wouldn’t stop them.”

The freed Australian economic advisor talks to Frontier about the military regime that put him behind bars and the views of fellow prisoner Aung San Suu Kyi.
BY Frontier