The Kaman: Citizens who suffer

A government decision to resettle Kaman from Rakhine IDP camps in Yangon has focused attention on the discrimination they experience, despite being eligible for full citizenship.

ALTHOUGH THE Kaman are among the 135 officially recognised ethnic nationalities in Myanmar they face cultural and institutional discrimination because they are not Buddhists.

One of seven Rakhine sub-groups and the only Muslim group among the 135, the Kaman are one of the smallest ethnic minorities, with figures from the 2014 census suggesting there are about 28,000 in Rakhine. Community leaders put the national population at about 45,000.

But as tensions increase between majority Buddhists and Muslims, the Kaman have found themselves occasionally at the centre of a political struggle between the government and hard-line nationalists over the response to the conflict in Rakhine State. As a result, their rights appear increasingly under threat.

A recent debate in the Pyithu Hluttaw served as a reminder of the hostility members of the Muslim group face on a regular basis.

On March 5, Union Solidarity and Development Party MP U Maung Myint (Mingin, Sagaing) submitted a proposal urging the government to review the decision to resettle 157 Kaman from 55 families in Yangon. The families had been living in an IDP camp in Rakhine State’s Ramree Township since communal violence erupted in the state in 2012.

“I think it will be more appropriate if we treat the cancer that is occurring in Rakhine State within Rakhine State itself,” Maung Myint, a minister in the previous USDP government, told the chamber. Allowing the Kaman families to resettle in Yangon would be “like allowing the cancer to spread across the country”, he said.

Among the 19 MPs who debated the issue on March 15 was U Pe Than (Arakan National Party, Myebon), who expressed dismay at Maung Myint’s “cancer” comment.

“It saddened me that U Maung Myint says it should only be healed in Rakhine State. If there is cancer in the body it can cause death whatever and wherever it is,” Pe Than said, adding that one of the recommendations in the final report of the Annan commission was for the  government to close the IDP camps.

U Ba Shein (ANP, Kyaukphyu) said that as one of the 135 ethnic nationalities the Kaman had the right as citizens to move freely and their resettlement in Yangon was in line with the law.

“More importantly, those returnees from Bangladesh, if they would be given citizenship, should be treated the same way,” he said.

The proposal was voted down 136 to 236. Minister for Social Welfare, Relief and Resettlement Dr Win Myat Aye told Frontier that most of the Kaman in IDP camps were civil servants and their families.

“When the conflict suddenly erupted, they were forced into the camps and were not allowed to leave. It is a kind of confinement. When our government came to office, we planned to close the camps because they are citizens and if they are kept in the camps any longer, they will suffer socially, economically and in terms of education,” he said.

He said that they had been given the choice of taking compensation for their properties and moving to Yangon or returning to their original homes in Ramree.

“Compensation was calculated according to the current value of their estate. A minority chose to stay in Ramree and for them the Ministry of Border Affairs built new houses. Everybody is doing well.”

But the minister’s comments jar with the reality for those Kaman who have moved to Yangon. Although they are pleased to have left IDP camps, beginning new lives in the commercial capital has not been easy – particularly for the few households who did not have a member working for the government.

Since 2012, many Kaman families have gradually migrated to Yangon to escape the prospect of communal violence.

Some have sought the help of a Kaman community leader, U Tun Ngwe, who runs the Kaman Social Network.

For almost 15 years, Tun Ngwe ran a poultry farm on land he rented from the Tatmadaw in northern Yangon. When the military ended the lease in 2014, he and some other Kaman pooled their funds and bought land in the Taukkyan area of Mingaladon Township to run their own farm. Most of the workers on the farm are Kaman from Ramree; more than 100 Kaman people from 32 families live on his property, including five households that were until recently in the Ramree IDP camp.

Tun Ngwe said Kaman wanted to resettle in the commercial capital due to concern about the possibility of further communal violence and because they were attracted to “the prospect of freedom in Yangon”.

He said they were provided with a free air ticket and K500,000 for each family, plus K100,000 for each person in the family. But since arriving in Yangon they have not received any state support – despite Yangon Region Minister for Rakhine Ethnic Affairs U Zaw Aye Maung encouraging them to seek assistance from the government during a visit to Taukkyan late last year.

“Despite multiple requests to government officials to provide assistance to those people living in Yangon, the response has been silence,” Tun Ngwe said. 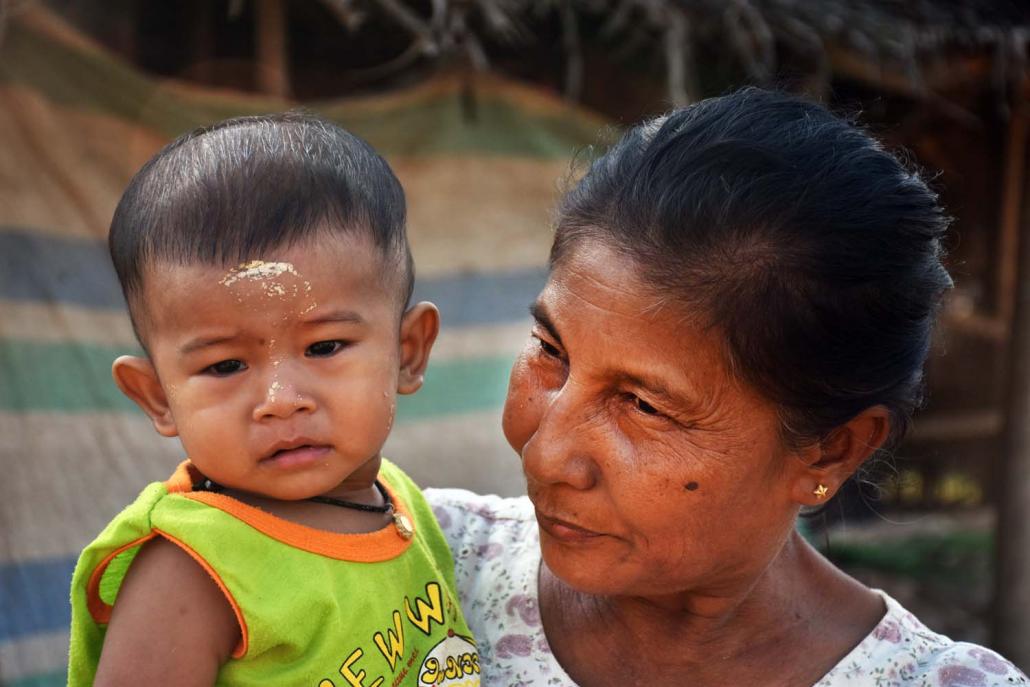 A Kaman woman and child attend the community’s water festival celebration in the Htaukkyant area of Yangon on April 13. (Su Myat Mon | Frontier)

As a result, the families have had to rely heavily on relatives and members of the Kaman community living in Yangon. “Their situation is like floating in the middle of the ocean without nearing the coast; they have nothing, no jobs, and they live from hand to mouth,” Tun Ngwe said.

He rejected the minister’s suggestion that the Kaman had been adequately compensated and suggested they may have been misled into giving up their land in Ramree.

Tun Ngwe said the cash from the government was to help the Kaman resettle in Yangon, but a subsequent article in state media said it was compensation for their land.

“We’ve informed the government already that the amount of money given does not come close to covering their losses. The land and the houses they own are worth far more than what was given,” he said. “In addition, our land in Ramree was bestowed by the king of Rakhine for serving the king. It cannot be transferred to anyone – we possess it forever and we will never give it up.”

The Kaman community is also watched closely by plain-clothed police and has been instructed to notify the military-controlled General Administration Department before talking to journalists.

When Frontier tried to interview Tun Ngwe and other Kaman community members, the interview had to be moved from their home to a teashop in Mingaladon because of pressure from the local authorities.

They kept a close eye on the conversation and even called Tun Ngwe while he was being interviewed by Frontier to inquire about his whereabouts. He said it was unfair for GAD to try and stop them from talking to journalists. “We should have the right to talk to media,” he said.

Daw Nwe Nwe Win, 51, a widow with two daughters and two sons, told Frontier she had decided to resettle in Yangon because living at Ramree IDP camp had become intolerable.

“My only hope in moving to Yangon was escape five years of difficulties in the camp,” she said.

Nwe Nwe Win said that if the government does not provide housing for the resettled Kaman, living in Yangon will not make a great difference to their lives. 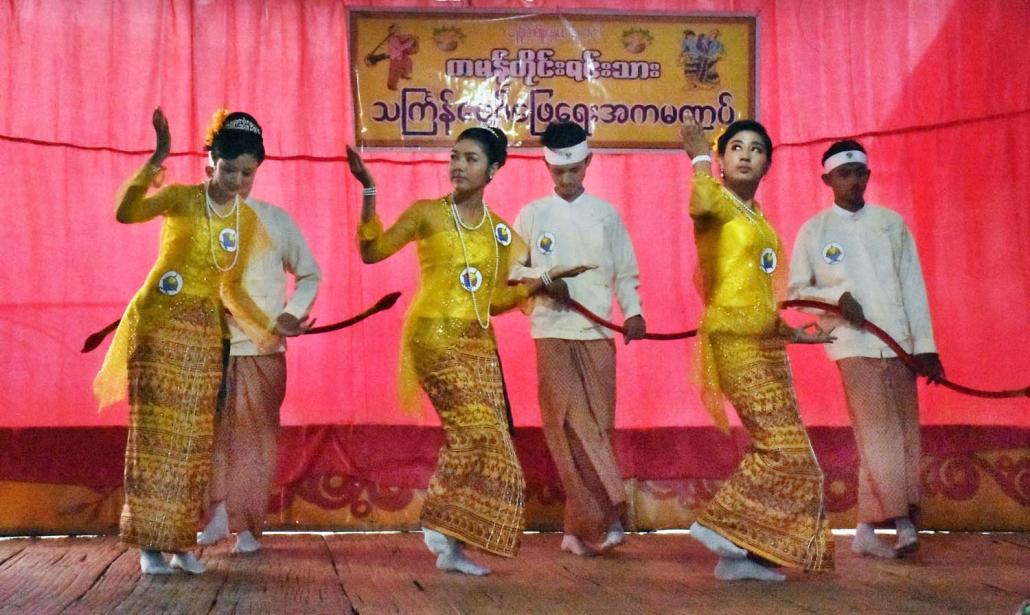 Young Kaman stage a performance for water festival. The bow carried by the men signifies their service as archers in the army of the Mrauk-U kings. (Su Myat Mon | Frontier)

“All of our troubles remain the same because we do not own a house and with neither a house or a business how can it be okay for us?” she said.

“Frankly, rather than living here with nothing, we would like to return to Rakhine if law and order can be assured by the government,” said Daw Nwe Nwe Win.

Some Kaman families, totalling about 60 people, moved to Yangon of their own volition before the group of 55 families were sent to the commercial capital.

Among them was Daw Ma Sai Kay, 42, a Buddhist married to a Kaman who had to move into an IDP camp with their three sons after the violence in 2012.

Her Buddhist relatives had helped the family when there were food shortages in the camp, Ma Sai Kay told Frontier.

“When food aid was not sufficient, I would call my family on the phone to ask them for more rice; that’s how I survived,” she said.

Over the years, Ma Sai Kay’s family gradually migrated to Yangon. She travelled alone by bus to Yangon in 2016, about two years after her husband. Her three sons came to Yangon separately, travelling via Thandwe because Muslims are not able to take buses directly from Ramree to Yangon. Ma Sai Kay said money and religion prevented the family from travelling together.

She says she enjoys the greater sense of freedom in Yangon compared with Ramree.

“I especially enjoy the freedom from worry because there are no threats here,” she said, adding that if she was confident that Rakhine was safe she would like to return because she misses her family. “All my seven siblings are there.”

“We do not have a home here; we are staying in a room next to a poultry shed that smells bad,” she said, laughing.

U Min Naing, deputy chairman of the Kaman Social Network, said he was shocked by the violence and arson at Ramree in 2012 because it involved a community that had previously been fairly harmonious.

Most Kaman in Ramree have Rakhine Buddhist relatives, Min Naing said, adding that his grandmother and mother were Buddhists. 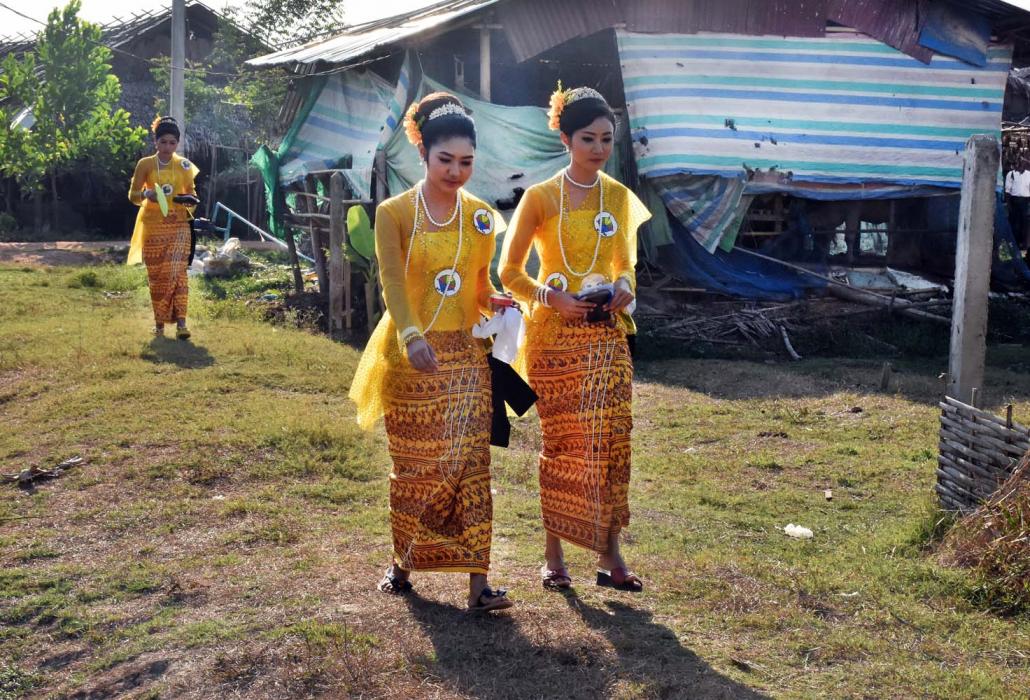 Some of his Buddhist relatives had set fire to homes in Ramree’s sixth quarter where many Kaman lived, he said.

He did not understand how this could happen in a country with a Buddhist majority that valued metta, which means “loving kindness”.

The trust between members of different religions can be fragile ­– particularly when tensions are being inflamed for political purposes, Min Naing said.

“The situation in Rakhine is due to a political game,” he said.

The government could protect its image from international criticism that it discriminates against Muslims by ensuring that the Kaman were treated the same as other citizens, he said.

“This is the right time to act on it and remove the bad image,” Min Naing said.

Tun Ngwe said USDP lawmaker Maung Myint’s opposition to the resettlement decision was contrary to the constitution, which states that every citizen had the right to freedom of movement.

“They [MPs] should study the constitution,” he added.