The illegal detention of young offenders in Monywa

Juvenile detainees in the Sagaing Region capital are being held in police custody in violation of the Child Rights Law, and are allegedly deprived of meals and physically abused by older inmates.

Since her teenage son was arrested in October 2019, Daw Yi Yi Myint, has visited him whenever she can.

Mg Kyaw Kyaw (not his real name), 16, was arrested on two counts of theft. He was sentenced to two months’ imprisonment in one case, but while the other case is being heard he is being held in a police cell at a station in Monywa, the Sagaing Region capital, together with adult prisoners.

Whenever Yi Yi Myint sees her son, he tells her stories of being bullied, of being beaten up and having his food stolen. Most recently, she said, an older inmate held him down and shaved his head and eyebrows.

“When I asked him who did it, he said the tan si,” Ye Ye Myint said, referring to a senior prisoner who is chosen by other prisoners to be in charge of the cell. “I asked him which one, because I would complain [to prison authorities]. He asked me not to complain. He said he dare not name the tan si because he is frightened that he would be beaten [if he tells].”

Kyaw Kyaw is far from the only child detainee in Monywa who has complained of abuse or neglect while in police custody.

According to police, 44 children are being held at two police stations during pre-trial detention. The Sagaing Region Legal Support Group says that since it formed in July 2018 it has received requests for assistance in eight juvenile cases.

“My son has been in prison for three months. Children and adults are put together in the prison,” said U Kyaw Lin Thant, whose son was also arrested in October 2019 for theft.

Parents and legal rights advocates say that under the new Child Rights Law the young detainees shouldn’t be in police cells at all.

The 1993 law forbade police from keeping a child detainee together with adults while awaiting a hearing at a juvenile court, and required police to release them under a bond to a parent or guardian or, failing that, send them to “a temporary care station or to another appropriate place”. Although it banned “youths” – those aged 16 to 18 – from being held with adult prisoners, it did not specify conditions for them while in police custody.

The new law makes explicit that those under the age of 18 should be handed over to parents or a guardian after signing a bond, or sent to a temporary care home or other suitable place if that is not possible “as a last resort”. Section 80(e) and (f) prohibit the holding of minors in police custody or keeping them together with adult prisoners, while section 83 proscribes juvenile courts from issuing detention orders to hold children in police custody or prison.

Police in Monywa say they are reluctant to release child detainees to their parents because they think the children will re-offend, but at the same time there is no suitable facility to house them.

The law does not specify which body is responsible for establishing such a facility for juvenile detainees, but regional Minister for Immigration and Human Resources U Moe Kyaw Thu insisted the government was working to address the issue.

“A plan is underway to accommodate the youths at a rehabilitation camp but the land use application for the camp is still in process. I think in future those children can be accommodated separately [from adult prisoners],” Moe Kyaw Thu said.

One member of the Sagaing Regional Legal Support Group, speaking on the condition of anonymity, said that they have asked the Sagaing Region chief minister and chief justice, as well as the Department of Social Welfare, to create a temporary shelter for juvenile suspects awaiting trial. Child rights observers said that the Union government should issue a by-law outlining clearly the procedure for constructing a temporary care home.

“Being a regional capital, Monywa should have such a home so that children can enjoy their rights. It would also remove a burden [on the police],” he said.

Hsan Lin said the new law was not designed to keep young people in prison, but to allow them to be released into the care of parents or guardians as they await trial.

“We want to send them home in accordance with the law. We don’t wish to keep them here,” he said. “But we also don’t want to just release them … the children form gangs and steal from people.”

In the meantime, children who are awaiting trial continue to be sent to police holding cells, where complaints of poor treatment are common.

Some parents allege that their children also do not have regular access to bathing facilities and as a result are suffering from dermatitis. Daw Yi Yi Myint, the mother of one juvenile detainee in Monywa, said she had asked her son be treated for his skin condition but the authorities have delayed administering the treatment.

But lack of meals and the children being held with adult inmates are more common complaints.

U Kyaw Lin Thant said the police refused to provide food for his son and instead instructed him to send meals himself.

“The police don’t feed the children. I was asked [by the police] to send him two meals a day – lunch and dinner,” he said.

The Sagaing Region Legal Support Group member said that because the Child Rights Law prohibits detention of children in police cells, the juveniles who are in police detention cannot get the government-provided meals given to adult detainees.

“They are therefore effectively excluded from the prisoner rations provided by the government. Their families have to send meals to them,” the member said, adding that meals sent by their families risk being stolen by adult detainees.

But police officials denied the allegations of mistreatment. Captain Win Naing, chief of the Monywa Township Police Station, said adult and juvenile prisoners have been receiving the same meals from the government since October 2019. He said prior to that the police had asked parents to send meals for their children.

Hsan Lin of Monywa Police Station also denied the allegations, saying that the government provides rations for all prisoners, including children.

“Previously we fed them with our own money. We bought rice for them. Some [families] also send meals, but some don’t,” he said.

“In the past there were hardly any juvenile detainees, so we only had to worry about feeding the adult prisoners,” he said, adding that a recent rise in youth gangs engaged in crime had changed the situation. “But lately, we have reported to higher level authorities, and requested funds from the government. We have since then provided meals equally to adults and children, according to the amounts set by the government.”

Hsan Lin said the children were generally treated well, and could read daily newspapers, periodicals and educational books that are kept on racks in the police cells.

“After they bathe in the morning,” he said, “we buy them tea at the tea shop near the police station every day.”

TOP PHOTO: A police station in Monywa that houses juveniles while they are in pre-trial detention. (Monywa Gazette) 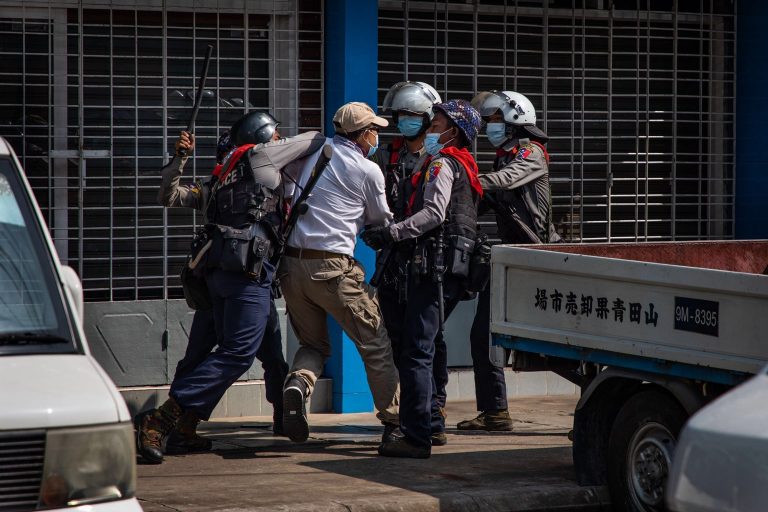