The hate speech threat to the 2020 election

Online hate speech and fake news in the run-up to the next general election will make 2020 a dangerous year for Myanmar.

MYANMAR’s 2020 general election is still more than eighteen months away, but key stakeholders are beginning to position themselves for it. As well as the election race, which is likely to be closer than in 2015, the ruling National League for Democracy must prepare to face a combustible mix of social media and nationalism. Fake news and hate speech circulating on Facebook and mobile messaging apps such as Viber may destabilise politics and disrupt the preparations for next year’s vote.

Race and religious identity remain potent and divisive issues in Myanmar and have sparked violent conflicts when weaponised on social media. Consider Mandalay, where violence between Buddhists and Muslims in 2014 was fuelled in large part by the incitement of Buddhist hardliners linked to the 969 movement. These conflicts have helped shape the country’s politics, and any resumption could dent the NLD’s popularity.

Meiktila in Mandalay Region provides an example. Before the 2015 election, lingering tension between religious communities in the town, where there was an outbreak of communal violence in 2013, was credited with a rise in support for the Union Solidarity and Development Party, which took a seat from the NLD in Meiktila in 2015. Political analysts fear that the USDP may appeal to race and religion in an attempt to lure voters away from the NLD in 2020.

Ko Amara Thiha, an analyst at the Myanmar Institute for Peace and Security, explained that rather than seeking to expand political support by attracting new voters, Myanmar’s winner-takes-all electoral system incentivises parties to radicalise their base because a party only needs a plurality of votes to win a district, as opposed to a majority. Political parties can therefore focus strategy on getting dedicated supporters to vote on election day.

If the USDP wanted to fire up its military-aligned base, which is prone to nationalism, it may try to paint State Counsellor Daw Aung San Suu Kyi as being too soft on Muslims or not doing enough to protect the Bamar majority in the context of the peace process.

Quick-spreading fake news, used for character assassination or to stoke prejudices, could exacerbate the tense climate that accompanies an election. Ko Ye Wai Phyo Aung, one of the founders of Athan, a Yangon-based organisation that promotes freedom of expression and monitors social media, told Frontier that online hate speech directed at the Rohingya spiked during campaigning for the November 2018 by-elections.

With widespread distrust of international media and hostility towards foreign interference, Myanmar has begun to resemble an information bubble. As it turns inward, fear and nationalism take hold, and can easily be exploited by electoral candidates. There is reason to fear that campaigning for the 2020 election will be especially noxious.

The surge in mobile phone penetration and internet connectivity since the 2015 election has dramatically changed the nature and pace of communication and political engagement in Myanmar. A social media activist, who did not want to be named, told Frontier that Myanmar had between 6.5 million and eight million Facebook users in 2015, but now there are 18 million to 20 million. The increase could make for a much higher volume of fake news and hate speech in 2020.

In Myanmar, as elsewhere, fake news and hate speech can be transmitted down from the top, directed by politicians’ Facebook pages or public messaging, or emerge more organically, originating from and amplified by certain “nodes” or social media influencers, from which it spreads like wildfire. 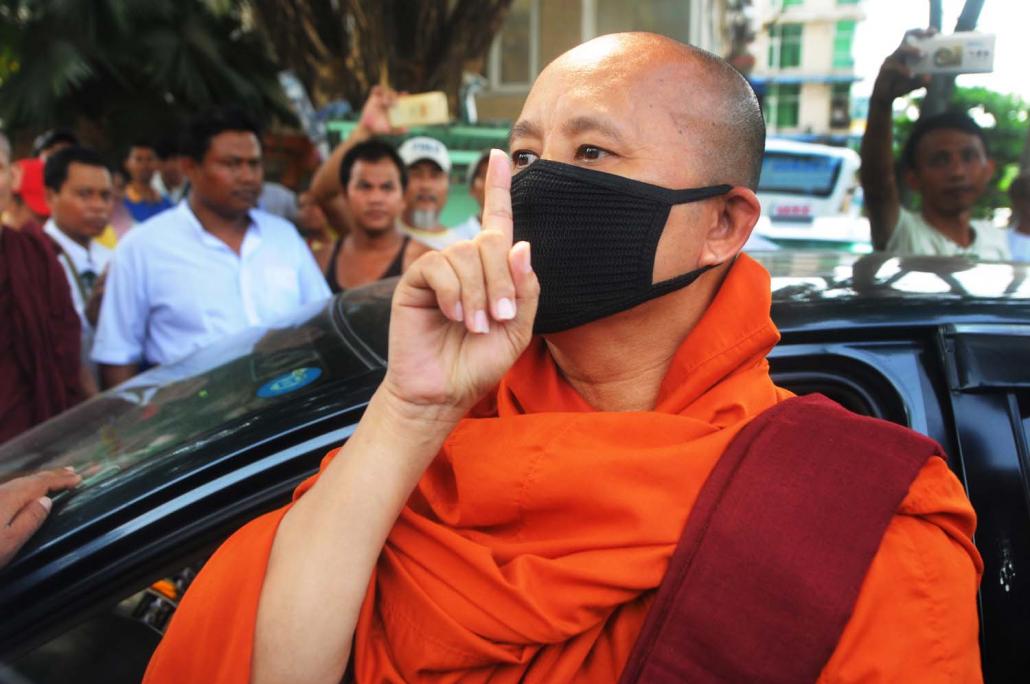 Ultra-nationalist monk U Wirathu, who has been accused of stoking anti- Muslim hatred, appears in Yangon in April 2017. (Steve Tickner | Frontier)

There are credible allegations that the military’s intelligence branch has used Russian-style influence operations to spread fake news to incite violence. Facebook reported that in 2017, accounts were created to spread false rumours of impending attacks by Islamic extremists on the anniversary of the 9/11 attacks in the United States. Many civil society groups in Myanmar that had been warning about hate speech had urged Facebook to take down accounts spreading harmful content but bemoaned its lack of action.

Amid the torrent of online abuse in Myanmar, Facebook has struggled to formulate a coherent response. Although the social media giant removed some accounts used by the Tatmadaw, including military chief Senior General Min Aung Hlaing, because they were accused of violating its community standards, the cumulative response has been too little, too late.

To help fill this void, some civil society groups have joined forces to monitor and analyse hate speech on social media, primarily Facebook. They include the Myanmar Institute for Peace and Security, which has three coders managing a social media database that uses more than 75 indicators to categorise and track reactions or keywords involving hate speech on Facebook.

By using algorithms, the MIPS team can measure the distance between key nodes as well as other metrics of abusive content. For example, the data can account for how many followers such influencers have, how they spread content, which users have more than one account, and even where in the country they are operating from.

Other groups such as Phandeeyar, a tech innovation hub in Yangon, are promoting digital rights and sharing tools with activists working to create a safer internet environment.

There’s also Panzagar (“flower speech”), a coalition of civil society groups that try to counter hate speech and promote inter-community dialogue, which was founded in 2014 by U Nay Phone Latt, a former blogger and political prisoner who is a Yangon Region lawmaker  (Thingangyun-1, NLD).

Despite their efforts to find creative solutions to hate speech, these groups are not big enough to confront the enormous challenges posed by toxic nationalism and social media. “The election will be very intense; there will be more political violence,” Nickey Diamond, a human rights activist at Fortify Rights, told Frontier.

Populist candidates in democracies around the globe from Hungary to the US have demonstrated the success of campaigns that promote xenophobic and nationalist visions and appeal to the insecurities of majority groups. Similarly, the USDP has demonstrated an increasing tendency for sabre-rattling in public statements, and has made clear that religion and national identity will be priority issues for the 2020 election campaign. “People are concerned about stability, national identity, [and] religion…so the USDP will address these issues,” USDP spokesperson U Nandar Hla Myint said in December.

Even if other parties resist the urge to foment Buddhist nationalism, the reluctance of the NLD to call out intolerance in society, particularly regarding Muslims, has lent space to extremist attitudes even without endorsing them. 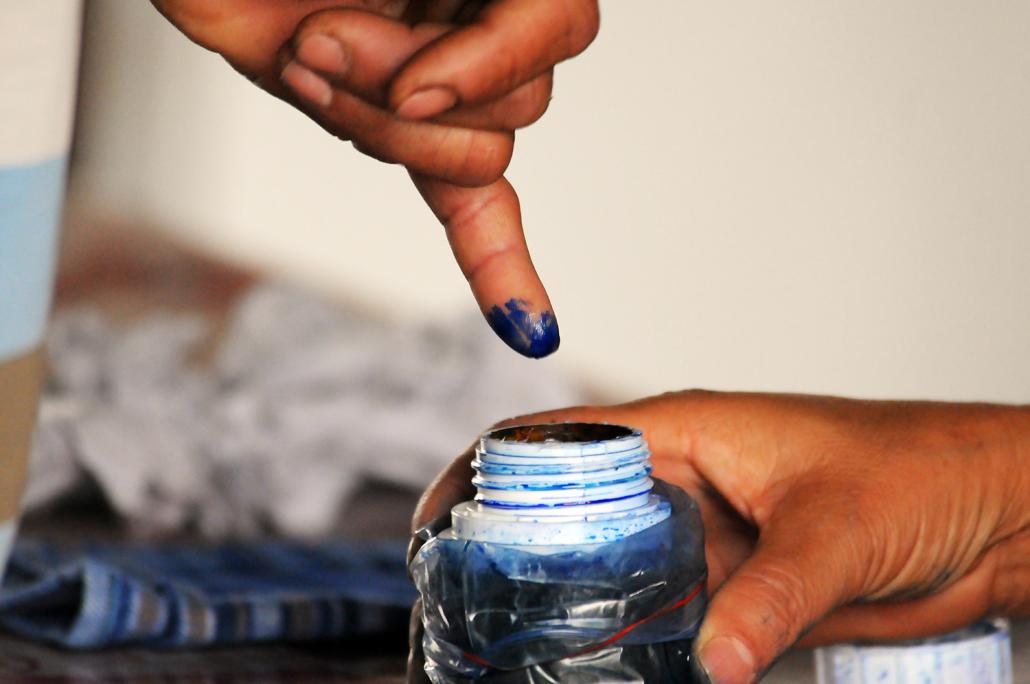 A voter has their fingers inked while casting a ballot in a polling station in Shan State during the 2017 by-elections. (Steve Tickner | Frontier)

Beyond criticising the NLD on its nationalist and governance credentials, the USDP has also begun accusing the Union Election Commission of bias, perhaps laying the groundwork for disputing another NLD win in 2020. Because the NLD nominates and appoints the UEC’s commissioners, they are cast as party loyalists that cannot be trusted to be fair. Questioning the UEC’s independence could undermine the public’s faith in the integrity of elections and may cause wider distrust of democratic politics. There is still time ahead of the general election for the NLD to implement much-needed reforms to grant the UEC more independence and therefore credibility.

The government and international organisations such as the International Institute for Democracy and Electoral Assistance, the Carter Center, the National Democratic Institute and the International Republican Institute, could coordinate fact-checking campaigns to counter fake news and improve transparency by providing voters with officially verified data including candidates’ CVs and political party platforms as well as polling station information. Improved public access to credible information could guard against deliberate disinformation campaigns as well as more organic rumours on social media.

These institutions also play an important role in spreading and deepening voter education in ways that counter the susceptibility of voters to believe and share fake news. Many international organisations employ local staff and train election observers and voter educators, all of which, through a multiplying effect, reinforce faith in participatory democracy.

Phandeeyar, local tech companies and civil society coalitions such as Panzagar, could work in unison to promote positive dialogue on social media by sponsoring entrepreneurs to develop apps that connect divided communities rather than reinforce existing stigmas. For example, the Asia Foundation has commissioned apps that allow voters to learn about political parties’ policies, the location of polling stations and other essential information on their mobile phones. Wider use of such apps could help dispel fake news aimed at character assassination of politicians or disinformation aimed at dissuading voters from participating.

Finally, now is the time to consider political reforms to grant the UEC greater structural independence from the ruling party. The government could appoint a neutral, third-party ombudsman or body of a few individuals who would review appointments and oversee the nomination process for election commissioners. This would strip the USDP of one avenue for criticising the NLD government, and would therefore be in the latter’s interests. It would also boost transparency and demonstrate to voters that the NLD takes the integrity of the electoral process seriously.

Most importantly, the people of Myanmar must be alert to the potential misuse of social media to spread misinformation and hateful content that could instigate conflict. Instead, voters should support candidates who promote inclusive, peaceful and democratic politics.