The fight against fake drugs

The fake drugs widely available in Myanmar are a threat to public health, an obstacle to combating the spread of treatment-resistant malaria and part of a global trade worth an estimated $75 billion.

SEVERAL MONTHS ago, when Daw Thaung Tin began experiencing searing pain in her abdomen each time she ate a meal, she sought treatment at a nearby clinic. The doctor did not say what was wrong but prescribed medicine that he said would make Thaung Tin feel better within two weeks.

A month later, with the pain persisting, Thaung Tin again visited the doctor, who prescribed another drug that was also ineffective.

A frustrated Thaung Tin turned to traditional medicine, which she said was more effective than the drug prescribed by the doctor.

Although she was not certain, Thaung Tin told Frontier she believed the drugs she was prescribed were fake.

There’s a good chance she was right.

“Fake medicines are a danger to public health,” said Ms Cyntia Genolet, manager for regulatory and health policy at the Geneva-based International Federation of Pharmaceutical Manufacturers and Associations.

“By circumventing medicine regulatory authorities and passing themselves off as something they are not, fake medicines put people at risk, contribute to resistance of genuine treatments and undermine confidence in health systems,” she told Frontier by phone.

Mr George Bray, vice president of member engagement for the International Federation of Pharmaceutical Wholesalers, based in the United States, said fake medicines were a “global concern”, and a major issue in developing countries where regulation is often weak.

“In developed countries a growing issue is the internet, which is being used as a marketplace. It is often unregulated and is difficult to control, so it makes it easier to sell counterfeit medicines,” Bray told Frontier in a phone interview.

Both the IFPMA and the IFPW are members of Fight the Fakes, a coalition of more than 30 organisations aimed at spreading global awareness about counterfeit pharmaceuticals.

‘Not a problem here’

The owner of a Yangon pharmacy dismissed Frontier’s questions about the availability of fake pharmaceuticals in Myanmar.

“Fake drugs is not a problem here. Maybe at the market, but not here. Anyway, a bigger problem for Myanmar is alcohol and smoking, not fake drugs,” he said. 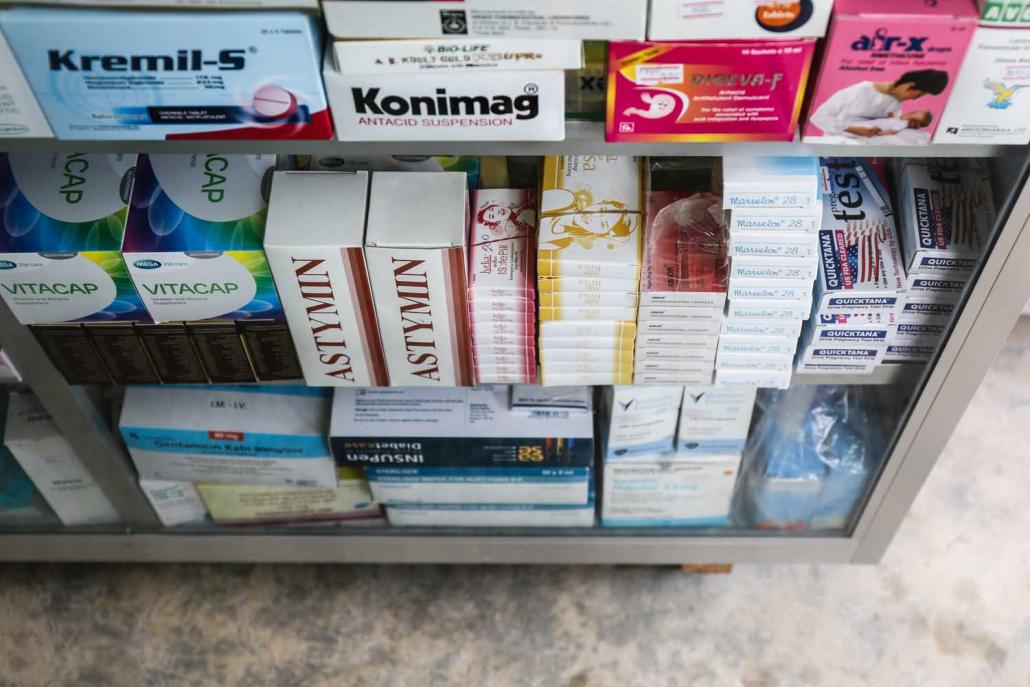 A Yangon-based risk management consultant who has investigated pharmaceutical smuggling and spoke to Frontier on condition of anonymity said the problem was “extremely widespread”.

“Myanmar has porous borders, and the poorly paid officials who are in charge of border security can be very indifferent when seemingly harmless products pass through their checkpoints,” he said.

India, China and Bangladesh are the most common sources, he said, adding that importers were generally aware that drugs were being smuggled into the country illegally, and there was little, if any, quality assurance or due diligence conducted by those importing the medicine.

“Most importers only care about price and profit margins – they aren’t in this to help people,” the consultant said. “If they are offered products at abnormally competitive prices, they aren’t likely to check whether the source or suppliers are legitimate, or test the drugs once received to ensure they are selling a 100 percent product.”

The consultant said his investigation revealed that three main categories of pharmaceuticals were being smuggled into Myanmar: legitimate drugs, sub-standard drugs and fakes.

“Legitimate drugs” are genuine products with the correct amount and type of ingredients and can range from paracetamol and antibiotics to products for treating cancer or liver disease.

The main concern with legitimate drugs is that they are not transported safely, he said.

“In some of our investigations we found that vials of high-end and specialised medicine that need constant refrigeration were often put on trucks and driven across borders and then to Yangon, exposing the products to changing temperatures and the elements over many days. This creates significant health risks for the patient as the integrity of the medicine is compromised,” the consultant said.

“Sub-standard drugs” are products that are not 100 percent genuine but are not fake. For example, a pharmaceutical manufacturer may offer to sell a drug with the packaging and labels of a particular brand, but supply a product that either does not have the right amount of active ingredients or in which they have been replaced by an inferior substitute.

“In some cases, those buying direct will often know what they are purchasing, but when there are long purchasing and supply chains, with middlemen trying to increase their own margins, importers are often unaware that what they are actually buying is something that is only 50 percent strength,” the consultant said.

Fake pharmaceuticals are usually packaged to masquerade as genuine products, but do not have active ingredients.

“In this instance, you don’t know what you are getting,” he said.

The use of fake drugs to treat malaria is a major issue globally and a particular concern in countries such as Myanmar where the disease is prevalent.  A study published by Malaria Journal in 2014 said that the global use of fake anti-malarial treatments contributed to about 450,000 preventable deaths a year. The study called the counterfeit anti-malarial scourge a “crime against humanity” that is often underestimated or ignored. 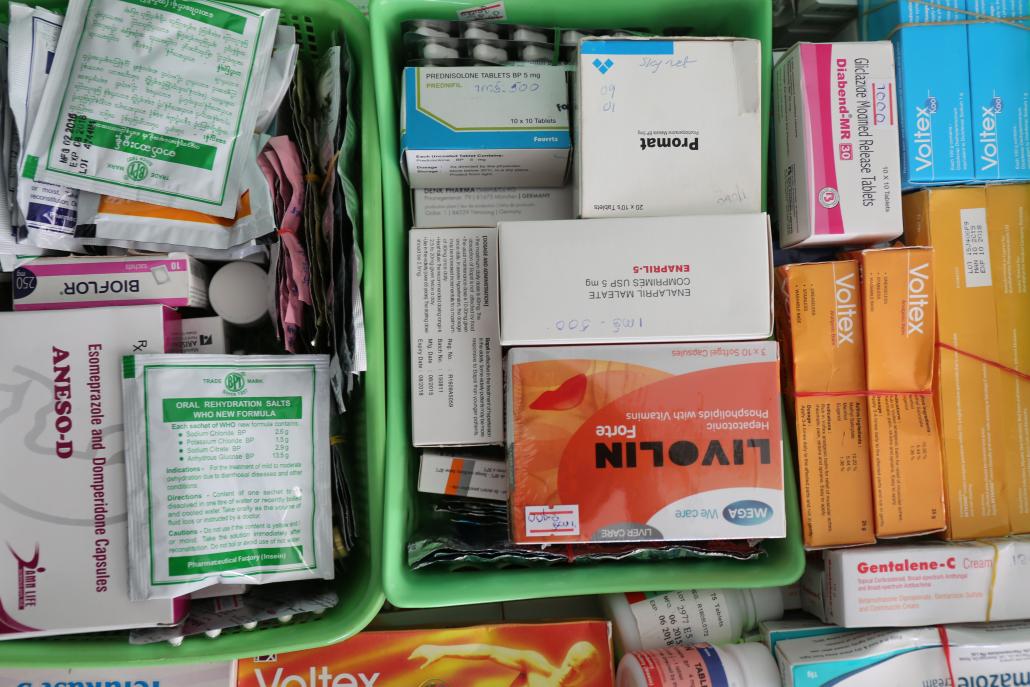 The study said artemisinin-based combination therapy (ACT) is effective for treating malaria but can be too expensive for those with the disease, who are often poor residents of rural areas. Instead, these patients often buy anti-malarials that are either fake or sub-standard.

“When fake or sub-standard malaria drugs are widespread it can increase the risk of the emergence and spread of resistant strains of malaria parasites,” said Mr Morgane De Pol, communications manager for IFPMA.

“The spread of drug resistant strains of the malaria parasite in the Greater Mekong Subregion of Southeast Asia is a growing global issue, which threatens to undermine the great progress made in tackling the disease over the last decades. This is a threat that requires that each person exposed to malaria is treated, protected and educated, and also requires the eradication of poor quality and fake medicines as well as investment in new medicines,” she said.

Fake pharmaceuticals are an issue that governments and regulatory authorities are struggling to combat, and the situation is no different in Myanmar.

The risk management consultant said the Myanmar government was in “an unenviable position” because a heavy-handed crackdown would likely push the smuggling underground – as it has with narcotics – and small-scale raids on retailers would have little impact, except for a few headlines in newspapers.

“One obvious area to focus on is outreach and education,” said the consultant. “Most people who sell drugs over the counter have no education or professional experience in pharmaceuticals. And most of those importing drugs have no idea about quality assurance.”

The Medicrime Convention is the only international tool that criminalises making and supplying counterfeit medicine, and no countries in Southeast Asia are signatories.

“An indication of a government’s commitment to dealing with the issue is whether or not they have put in place strong legislative framework in order to deal with it,” said Genolet.

However, measures are being taken to confront the issue in Myanmar.

The Promoting the Quality of Medicines program, a collaboration between the United States Agency for International Development and a Washington-based non-profit group, the US Pharmacopeial Convention, is working in Myanmar to help improve the quality of testing for fake pharmaceuticals. The main laboratory, in Nay Pyi Taw, was recently granted ISO accreditation, and there have been moves to improve capacity at laboratories in Yangon and Mandalay.

Those working to combat fake drugs say it’s a problem that will take a long time to resolve, but stress that a key element of the campaign will be to raise awareness about the issue among governments and the general public.

“It is still an issue that many people are not aware of all over the world,” said Ginolet. “We are trying to reach out as much as possible about the work we do and the effects that fake medicine can have.”

Myanmar’s Food and Drug Administration, the industry safety regulator, could not be reached for comment, despite many attempts.