A cluster of villages near Yangon has emerged as an elephant poaching hotspot, with some accusing local police of underreporting the problem.

AT 7am on November 7, 2016, U Soe Naing was woken by the overpowering stench of rotting flesh. It didn’t take long to find the source of the smell; the head of an elephant was resting on the bank of a creek that ran beside his house. He later found the body stuck on a tree stump about 400 metres further upstream. It appeared to have drifted downriver to Chaung Sauk village during the night, amid a heavy downpour.

“The body was badly deformed,” Soe Naing recalled in a recent interview. The carcass had no skin or flesh; like the head, the limbs had been severed.

For the residents of Chaung Sauk, near Okkan in Yangon Region’s Taikkyi Township, removing the elephant carcass proved problematic. One of them splashed it with petrol in an attempt to burn it, but the remains were too wet to catch alight. After three days, they managed to free it so it could continue further down the creek.

“We decided to push it downriver because no one in the village could bear the smell anymore,” said U Min Soe, a village elder.

The body continued down the creek, breaking into parts in the strong current. These sections were finally trapped in a water control gate in San village, in a neighbouring village tract.

Administrator U Tin Hla said the elephant’s remains were collected using an excavator and buried near the dam. By this time, the carcass had disintegrated even further. “The villagers tried to take it out with their hands, but the smell was too strong to even get close – there were maggots all over it,” he told Frontier.

Both Tin Hla and Min Soe said it was the first time they had seen an elephant carcass or evidence of poaching. But others say that poaching is widespread in Chaung Sauk village tract, at the southern edge of the Bago Yoma, or mountain range.

U Kyaw Naing Win, the administrator of Kyauk Pyin Thar village, told Frontier that “at least nine or 10” elephants were killed in the vicinity of Okkan during the past year. He said poachers moved into Chaung Sauk village tract over two years ago. Most of the killings occurred in Kyauk Pyin Thar and neighbouring Mau Khon village, which are the closest to the mountains and a forest reserve where many wild elephants live.

“I think the poachers started killing wild elephants around April 2015, although it could have been earlier. They use double-barrelled guns to shoot them,” he said. 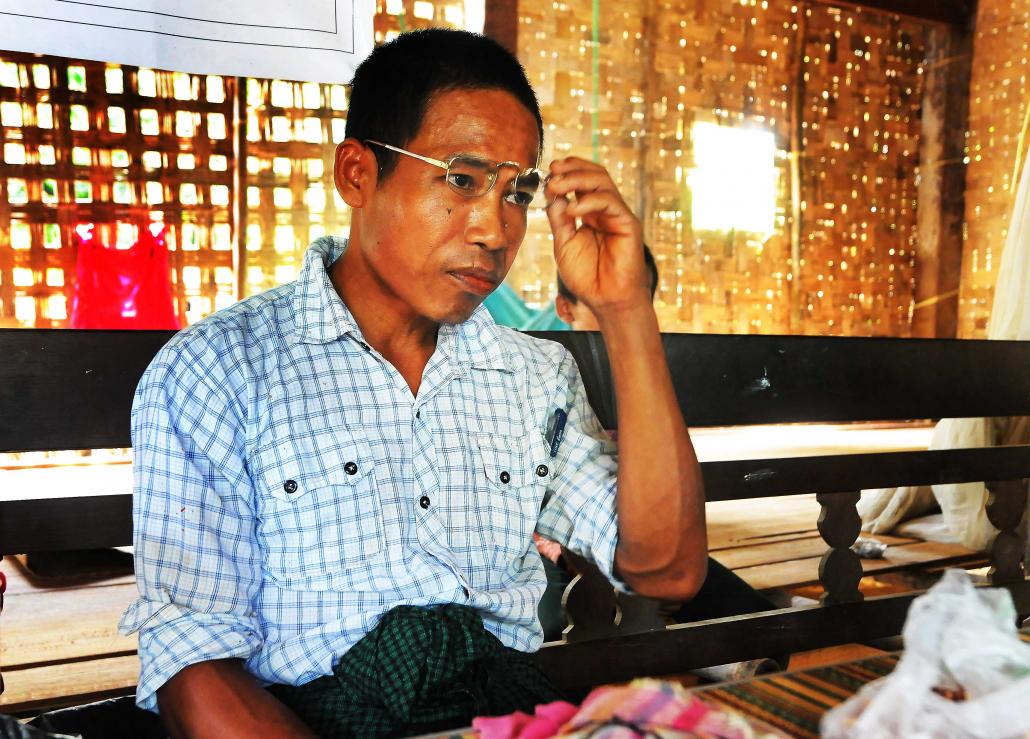 Kyauk Pyin Thar resident Daw Khin Lay Swe recounted seeing poachers skinning a wild elephant in a field on the outskirts of the village last year. “My husband asked me if I wanted to see an elephant being butchered. I followed him and I saw the poachers were skinning the elephant,” she told Frontier, putting down the cheroot she was smoking. “I saw they kept the skin, the trunk and the tusks. They chopped the flesh and gave it away to the bystanders.”

In June, the World Wildlife Fund warned that growing demand for elephant skin and other parts for use in traditional medicine was driving an increase in poaching, particularly in the Bago Yoma and Ayeyarwady Delta. So far in 2017 at least 20 elephant corpses have been found stripped of their skin at two sites that WWF monitors – more than the number of elephants usually killed in a whole year, it said.

WWF said around 110 elephants have been killed since 2013, mostly in the delta and Bago Yoma (this figure contrasts with the state-controlled Global New Light of Myanmar, which said on June 27 stating that 72 elephants had been killed by the poachers between 2010 and 2016). WWF warned that elephants could vanish from these key population areas within just one or two years. “In a country that has less than 2,000 wild Asian elephants, this is a frightening uptick that requires immediate action to ensure their survival,” the group said in a statement.

Noting that there were no anti-poaching patrols in the Bago Yoma and Ayeyarwady Delta, WWF said it was launching “an emergency action plan to train, equip, and deploy 10 anti-poaching teams to the most vulnerable areas, and implementing a thorough plan to stop the slaughter”.

Presently, enforcement of anti-poaching provisions of the Protection of Wildlife and Conservation of Natural Areas Law is the responsibility of the police and rangers from the Ministry of Natural Resources and Environmental Conservation.

Kyaw Naing Win, the Kyauk Pyin Thar administrator, said he wants to combat poaching because elephants “are a beauty of the jungle. We value them.” 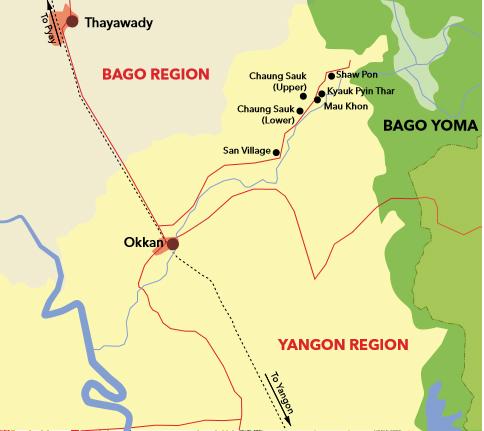 He’s been unhappy at the lack of support from Okkan police. He said the poachers moved openly through villages in the Chaung Sauk area and were known to residents. “I find it hard to believe that the police were not aware the movements of the elephant poachers in the villages for two years, particularly when there is a regular police informer in Mau Khon village,” he said.

Police Colonel Than Naing, the head of the Okkan Township police station, said there were just three reported cases of elephant poaching in the area last year. He grew defensive when asked whether more cases may have occurred but not been reported. “Well, I don’t know the exact figures since I was not involved in this [poaching].”

He seemed unhappy at the suggestion police were ignoring the problem and also denied the existence of a police informer in Mau Hkon village. “The police informers are just concerned citizens who respect the rule of law. We don’t have any particular informers,” he said.

Pol Col Than Naing said that 11 people had recently been arrested on suspicion of killing wild elephants, while seven more remained at large. They are facing charges under section 37 of the protection of wildlife law, which provides for a maximum seven-year prison term or fine for those found guilty of “killing, hunting, possessing, selling, transporting, wounding or exporting a completely protected wildlife species”.

But Kyaw Naing Win noted that the 11 people arrested were all residents of Kyauk Pyin Thar and Mau Khon who had assisted the poachers; the poachers had not been detained.

The residents were paid by the poachers to carry the elephant skins, tusks and trunk from the carcass to a designated spot for collection, he said.

One of those under arrest is the former administrator of Chaung Sauk village tract, who is accused of colluding with the poachers. His participation made it easier for the poachers to recruit young people to help them, Kyaw Naing Win said.

“Some of them were persuaded with incentives and some were forced to cooperate,” he added.

Kyaw Naing Win said some in the village also supported the poachers because they were frustrated or angry at the elephants; this includes farmers whose fields have been damaged by the animals or those who know someone that has been killed by a wild elephant.

U Than Htun owns 10 acres of farmland on the outskirts of Kyauk Pyin Thar. Three years ago, a herd of about 10 elephants destroyed 5.5 acres of his paddy. As he recounted this to Frontier, he pointed to elephant footprints in the mud that had been made the previous night. 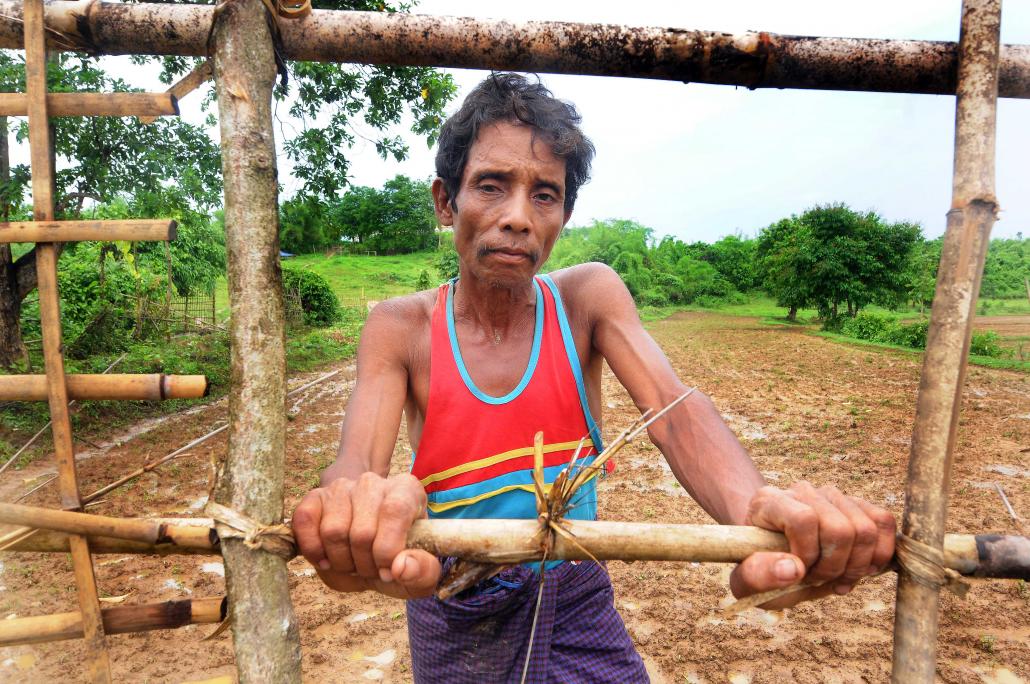 “There, the elephants came from that side of the jungle,” he said, pointing towards the undergrowth. They are most commonly encountered from September to November, when the paddy is nearly ready for harvest.

There’s little residents can do. Sometimes they set off fireworks, but the elephants soon get used to the loud noise.

“Since the elephants are regarded as a national treasure,” Than Htun said with a sigh, “we can’t do anything except try to shoo them off by clanging a metal board.”