Each morning, a medical team visits people in quarantine to collect swabs that will be tested for COVID-19. It’s hard, uncomfortable work that carries the constant risk of infection.

The day hasn’t started well for Dr Kyaw Thet Aung and his team from the Department of Medical Research.

It’s about 8am and they’ve just arrived at a hotel in Yangon to collect COVID-19 samples from people who are in quarantine.

Most hotels prepare for the team’s arrival by setting aside rooms for the staff to change and shower. They have rubbish bags at the ready to safely dispose of waste. They also make sure their guests are sent to be tested by the DMR team in the correct order: each test has already been designated to an individual, and the order of the tests is shared with the hotel in advance. 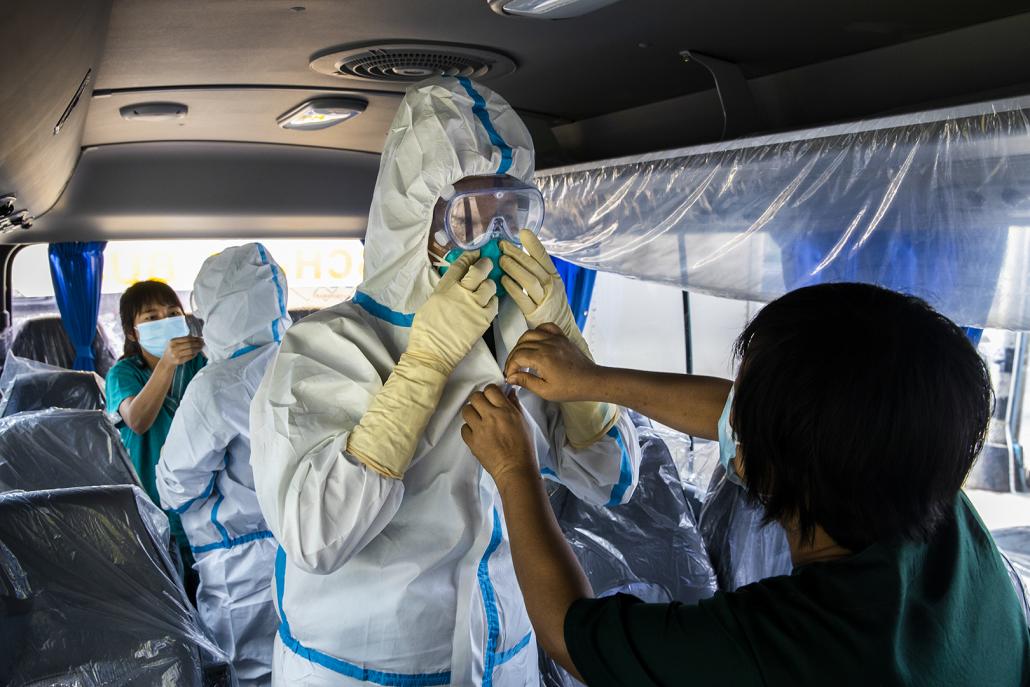 Medical workers put on personal protective equipment before testing for COVID-19 among guests at a “quarantine hotel” in Yangon May 22. (Hkun Lat | Frontier)

Unfortunately, that’s not the case today. With no rooms available, the medical workers change into their personal protective equipment awkwardly inside their van. The 48 guests who are to be tested begin arriving randomly, from elevators and stairways, and the DMR team then spends about an hour arranging them into the correct order.

“If the hotel doesn’t cooperate well, it just wastes our time,” says a visibly frustrated Kyaw Thet Aung, who is one of two supervisors on the testing team.

The team sets up their equipment on a table in the hotel’s basement carpark. Large fans are set up to cool the medical staff, who have to wear personal protective equipment suits under the sun, and to – hopefully – disperse any traces of COVID-19 that might be present in the air. 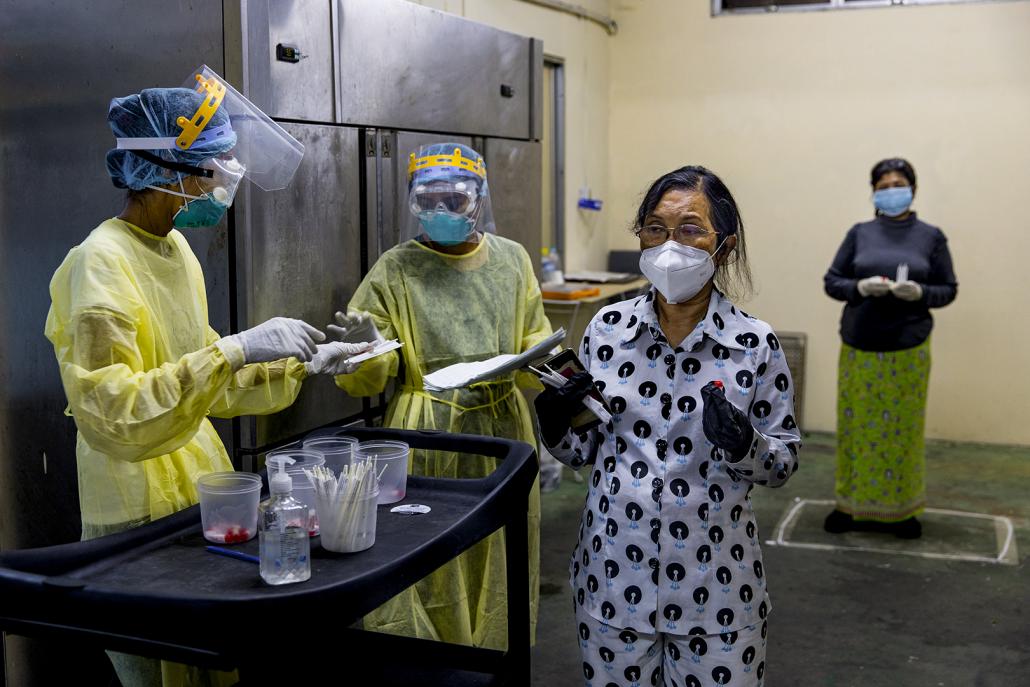 A woman, testing kit in hand, lines up to be tested for COVID-19 at a “quarantine hotel” in Yangon on May 22. (Hkun Lat | Frontier)

Finally, they are ready to begin. One by one the guests who are due to be swabbed are called over to the vehicle, which is a Daihatsu Hijet that has been modified to accommodate the personnel and equipment needed to conduct the testing. A worker in the car extends gloved hands through a clear glass window at the rear of the vehicle, and stick a swab deep inside the nose and mouth of the patient. Other medical staff then help to put the swab into a tube – officially referred to as a viral transport medium – that has been labelled with the name of the person being tested. The workers who collect samples every day are at the most risk of exposure to the virus. To protect themselves and other patients, the team changes their gloves and sprays disinfectant after each patient. 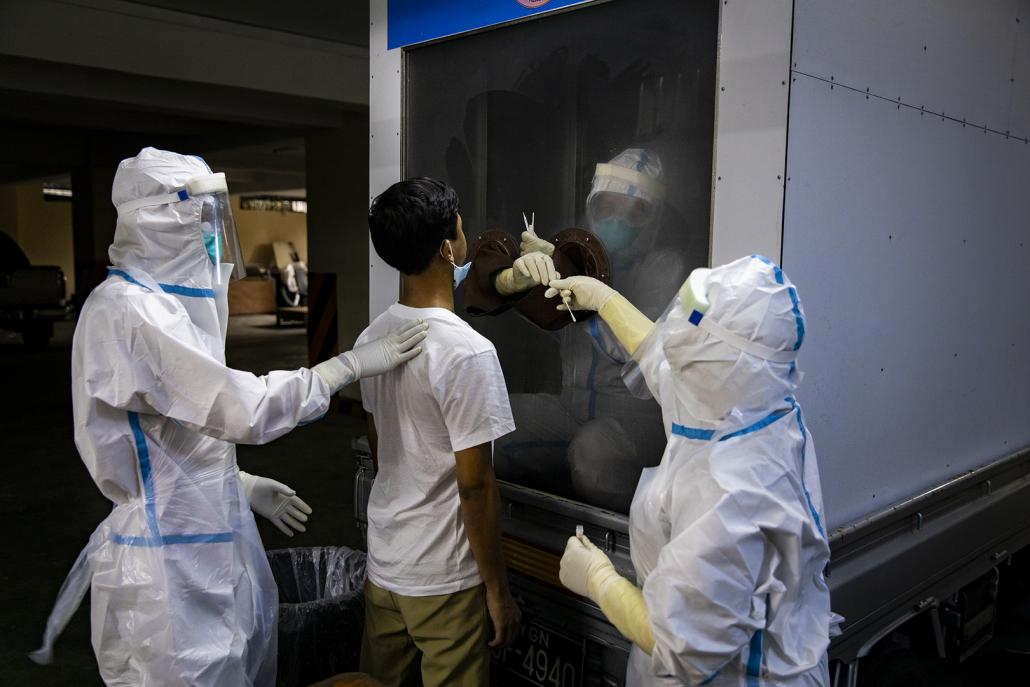 Medical workers swab a person on May 22. (Hkun Lat | Frontier)

Watching the team collect samples on May 22 underlined that the process of testing for COVID-19 doesn’t just happen in a laboratory. The samples need to be collected and transported, and handled carefully both to ensure their integrity and keep health workers safe. The process is labour intensive, uncomfortable for both patients and the medical staff sweltering in their PPE, and potentially dangerous if the swabs are not handled properly.

In the early stages of the pandemic, the National Health Laboratory conducted all tests, including the collection of samples. But as the number of tests being conducted increased, the Department of Medical Research was on April 24 tasked with responsibility for collecting samples at hospitals and quarantine facilities in Yangon. This has helped to reduce the burden on the NHL, which still tests samples sent from outside Yangon. 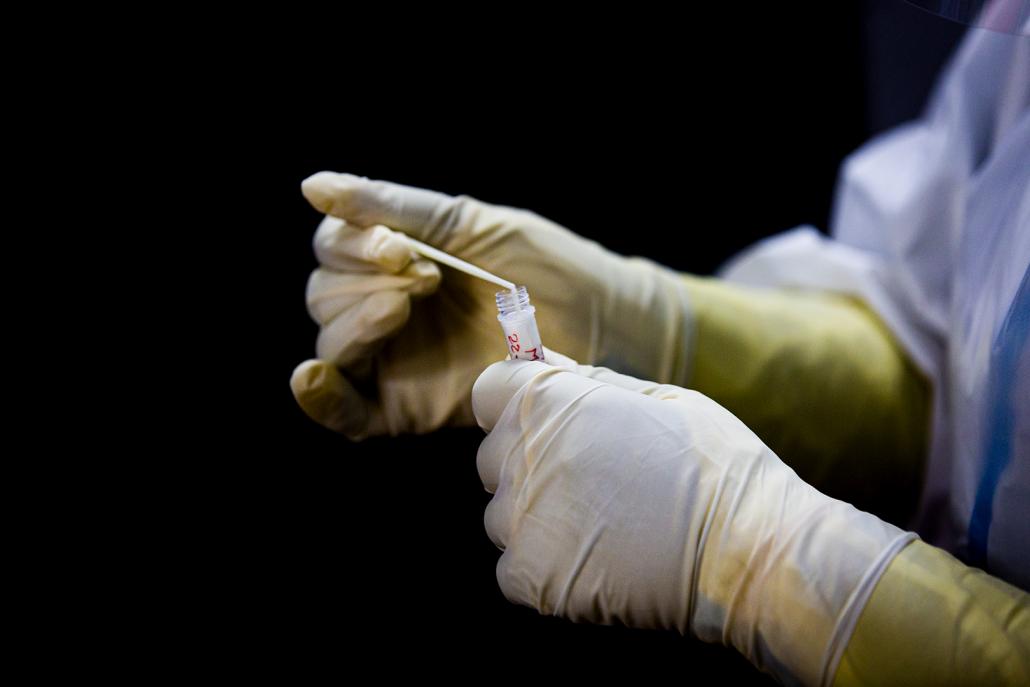 A medical worker places a sample into a viral transport medium tube on May 22. The workers who collect samples every day are at the most risk of exposure to the virus. (Hkun Lat | Frontier)

Each morning at 7am, the DMR team comprising two supervisors and six medical staff leave the department office in Ahlone Township and drive to hotels or facility quarantine centres assigned by the Yangon Region Public Health Department. Although there are two other testing teams, one from the Tatmadaw and the other from the Public Health Department, the DMR team tests the largest number of patients.

Most of those being tested have recently returned from abroad, and are undergoing mandatory 21-day facility quarantine. 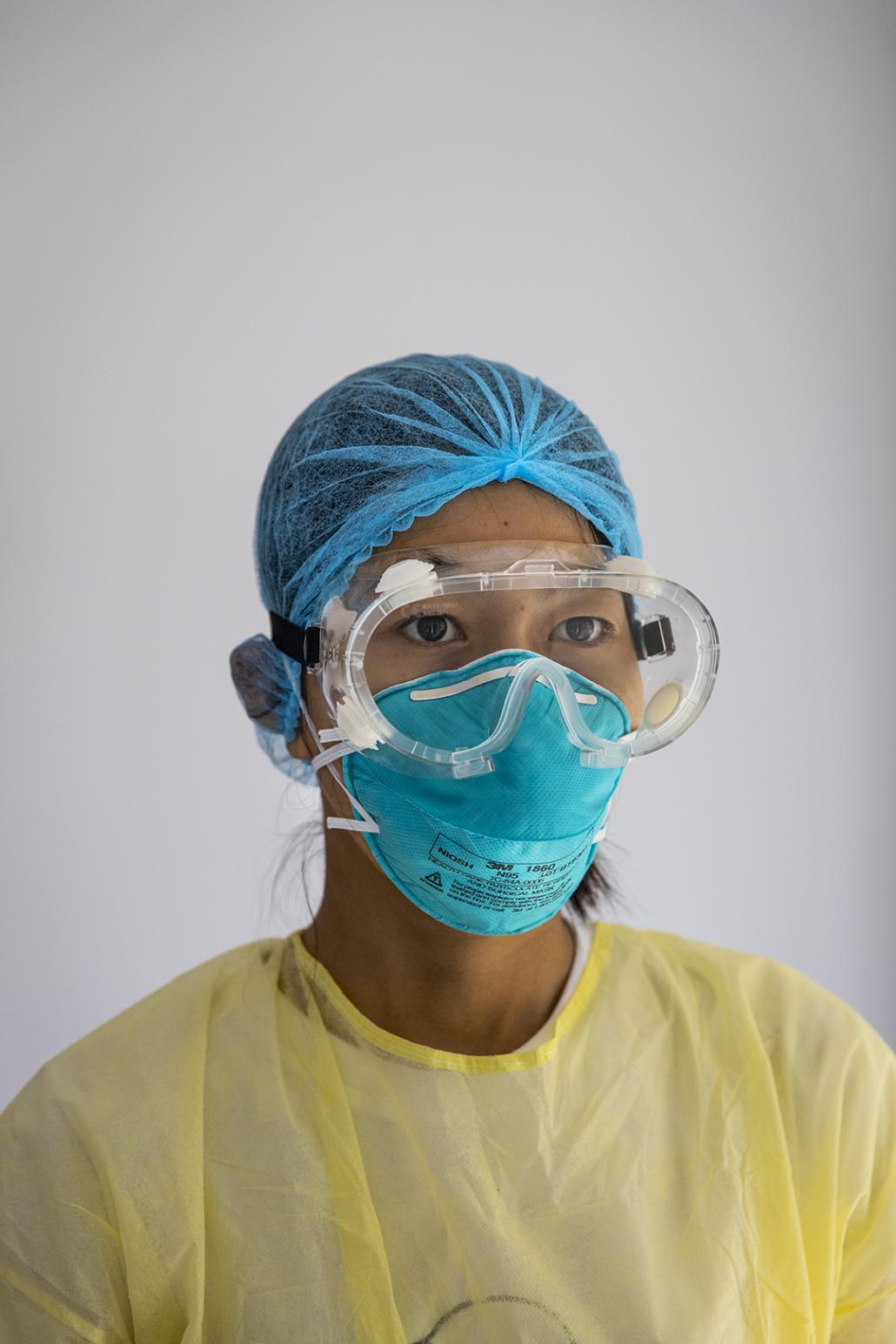 A medical worker in protective gear who has been assigned to stay at a “quarantine hotel” along with people who have returned from abroad. The day of the test was the first time she’d left the hotel in 11 days. (Hkun Lat | Frontier)

For those who can afford them, hotels are a popular alternative to the more spartan government facilities. Each “quarantine hotel” approved by the Public Health Department accepts between 30 and 100 guests, and charges an average of K35,000 a night for the three-week stay. The Public Health Department also assigns two healthcare workers to each hotel, where they must stay for 21 days without being able to go outside.

The DMR team usually visits two or three sites a day, collecting up to 200 samples, and wraps up its work in the afternoon. The team deposits the samples at the DMR lab for testing on an RT-PCR machine, which detects genetic material from the virus. 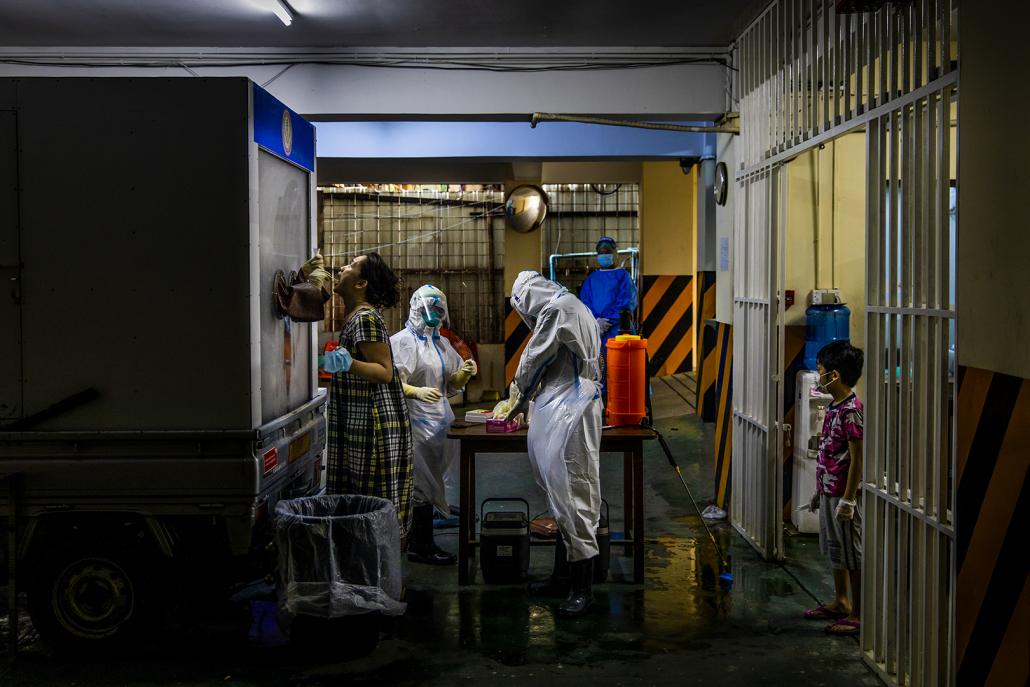 Since being assigned to collect samples in Yangon on April 24, the Department of Medical Research team has not taken a single day off. (Hkun Lat | Frontier)

“From the day we started testing, on April 24, we haven’t had a single day off yet,” says Dr Aung Pyae Phyo, who supervises the team together with Kyaw Thet Aung.

On that first day taking samples, they found several positive cases. “It was a scary moment for us,” Aung Pyae Phyo says. “When we experienced the virus in practice, it made us realise immediately that it was not far away.” 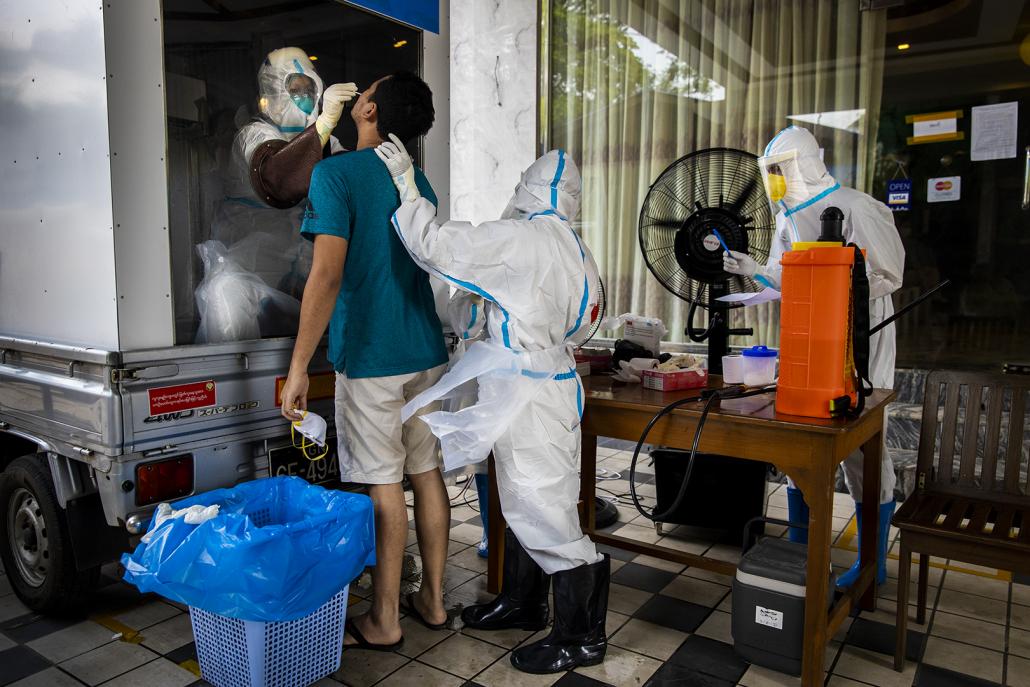 Members of the Department of Medical Research team have not returned home since they started testing for COVID-19 on April 24. (Hkun Lat | Frontier)

Since that day, neither Aung Pyae Phyo nor Kyaw Thet Aung have gone home to their families.

Similarly, for health worker U Aung Win Htun joining the testing team has meant not seeing his eight-month-old daughter. In normal times he works for two weeks and then returns to his family, but because of the testing workload he hasn’t been home in more than three weeks. “It’s been so long my baby must think I am a stranger,” he laughs. 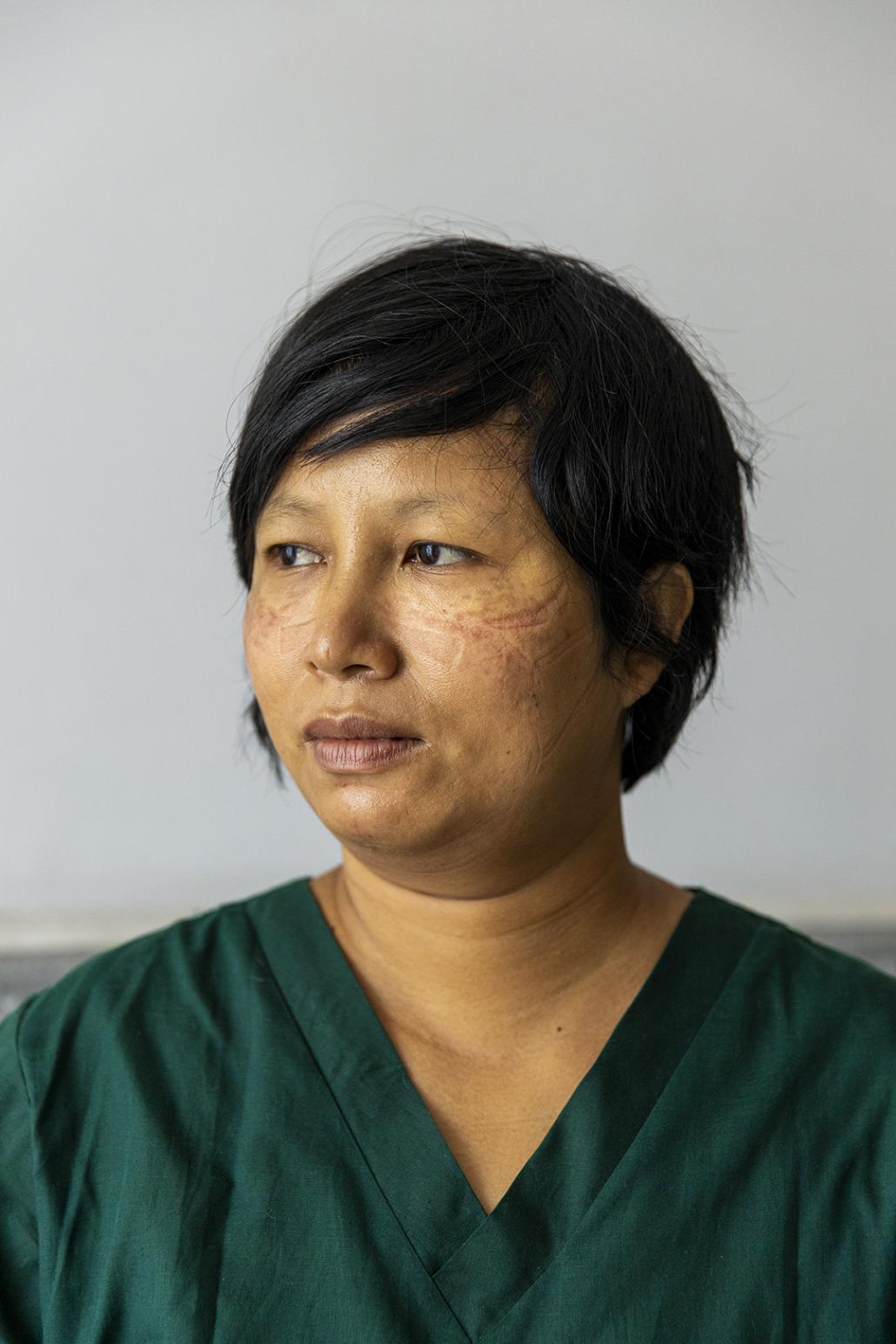 The team usually takes about two hours to collect samples from about 40 people, but the disorganised testing session at the hotel means the process drags on for another two hours, and the team is only able to move on at noon.

“We don’t want to stay inside the PPE for even five minutes more than necessary because it’s so hot,” Aung Win Htun says. 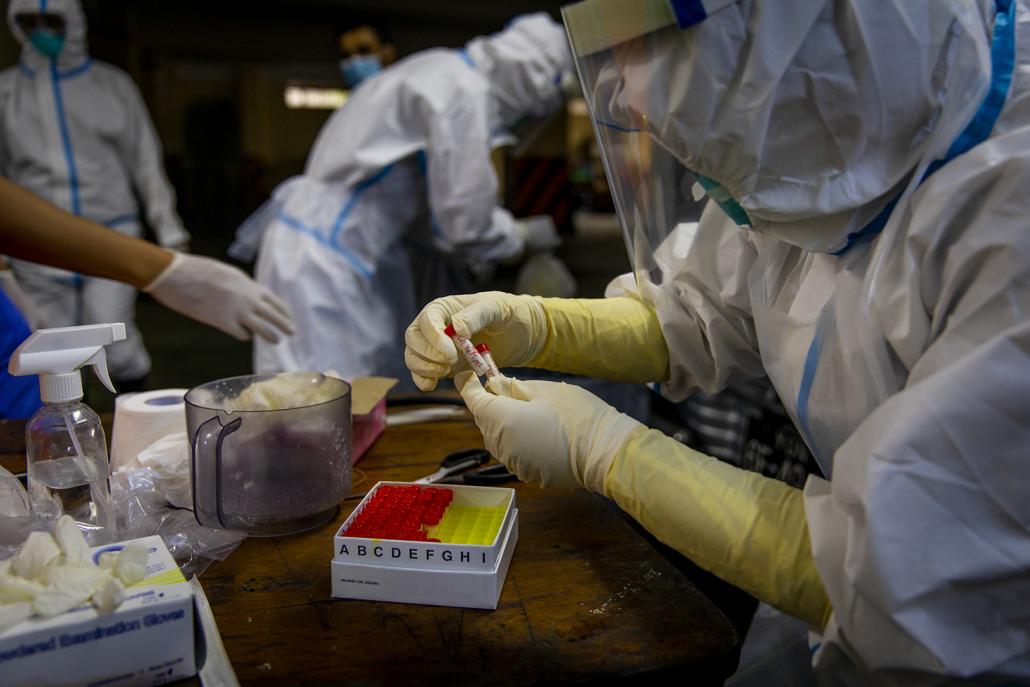 The viral transport medium tubes are placed in a box, wrapped in plastic and then placed in an ice chest to keep the samples at the required temperature. (Hkun Lat | Frontier)

The swab team packs the tubes with the swabs into a plastic box. This box is then wrapped in a plastic bag and put into an ice chest to keep the samples at the required temperature. All the PPE is then thrown away and the team showers to cool down and remove the sweat that has built up in the suits.

At their second hotel stop, though, the frustrations of the morning lift immediately.

The team are met by staff wearing their own PPE, who help to get the guests ready for testing. There are rooms for changing and showering and, after testing finishes, the hotel provides them with food and drink in recognition of their hard work. 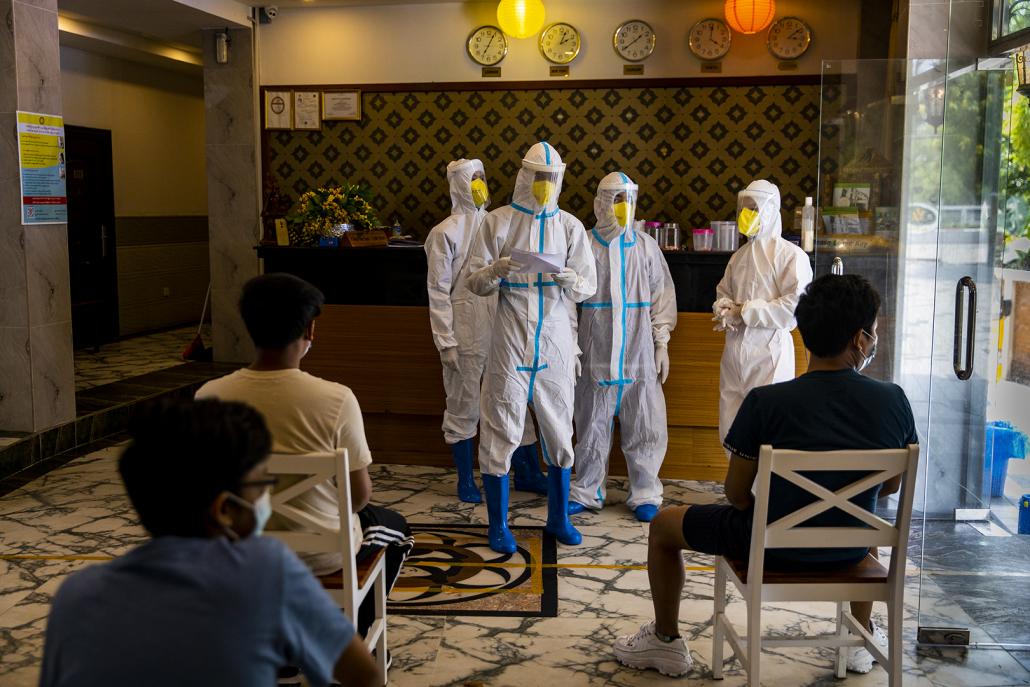 Volunteers and hotel workers check a list of names of people in quarantine who are to be tested for COVID-19 on May 22. (Hkun Lat | Frontier)

This helps to relieve some of the stress. But in the back of their minds – and despite the layers of PPE – there’s always a lingering concern that they might catch COVID-19.

“Although we’ve finished collecting all of our samples, I can’t relax yet – only when the results come back negative tomorrow will I be relieved,” says Aung Win Htun. “If there’s a positive case we won’t have to go to quarantine because we are wearing PPE. But anyway, the disease still scares me.”

TOP PHOTO: A PPE-clad medical worker waits behind protective glass to take samples from people in quarantine in Yangon that will later be tested for COVID-19. (Hkun Lat | Frontier)