The dice are loaded

Elected on a platform of transparency, the NLD’s plans for the presidency remain shrouded in secrecy.

All of a sudden, Myanmar’s much vaunted political transition is looking a little rough around the edges. With less than six weeks to go before the next government takes office, the tensions between the military and the National League for Democracy are self-evident, even if the provenance of this friction is less than clear. Outgoing President U Thein Sein appears to consider the current impasse serious enough to warrant a last minute cancellation of his attendance at an ASEAN summit in the United States, leaving him the only head of state from the regional bloc to forgo the meeting.

What we do know, despite the furtive nature of their negotiations, is that talks between the NLD and the military are centred on ending the constitutional prohibition on a Daw Aung San Suu Kyi presidency. To do so under the Constitution’s own amendment provisions would require more than 75 percent of all Union MPs — bearing in mind the military has an effective constitutional veto through its 25 percent allocation of parliamentary seats — and a national referendum in which more than half of all eligible voters approved of the change. It could take upwards of a year for any vote to be held. 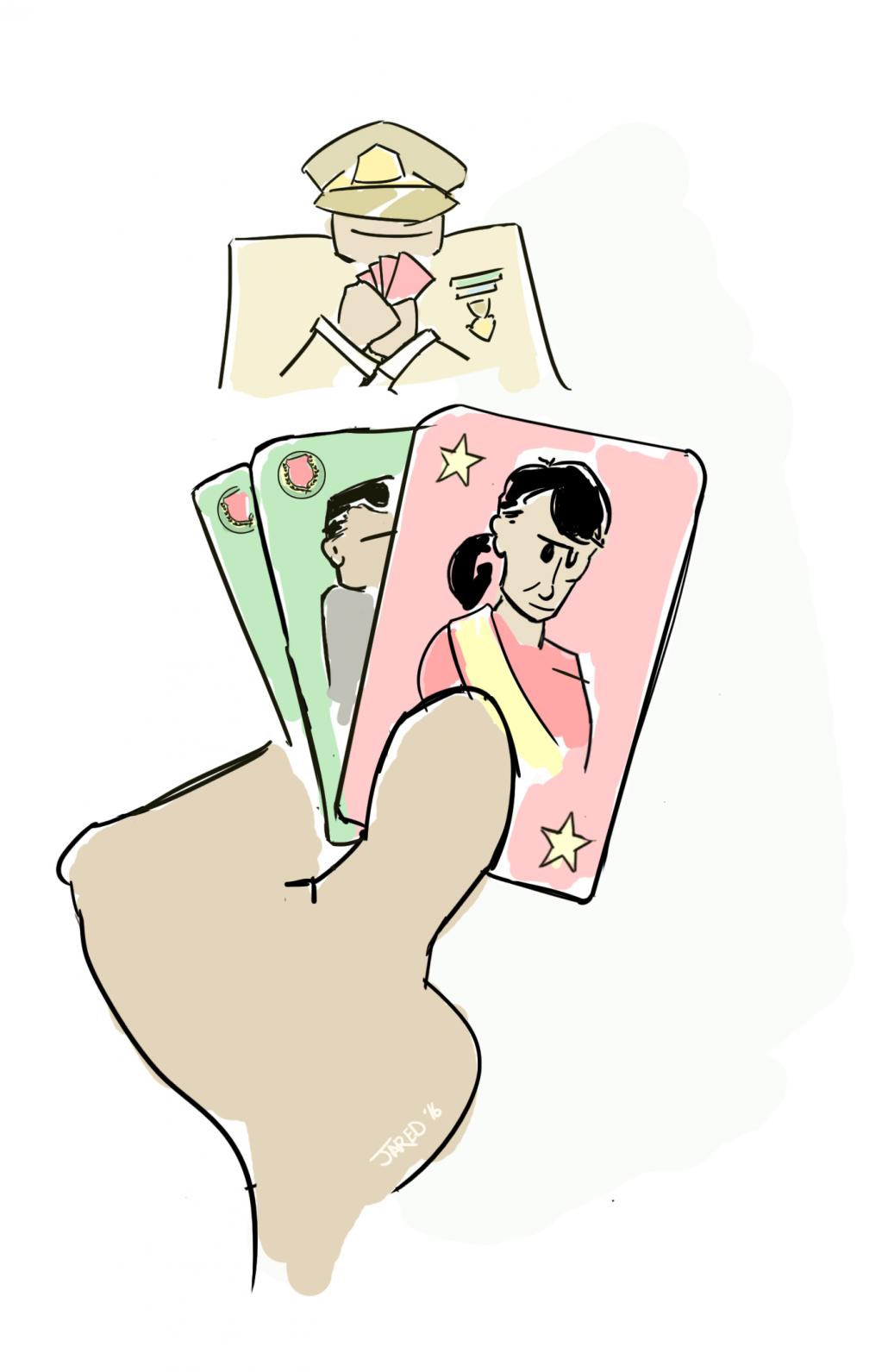 In lieu of a referendum vote, senior NLD figures have discussed the prospect of “suspending” Section 59(f), the clause of the Constitution that bars presidential candidates from having children with foreign citizenship. A partial suspension of the constitution has some precedent in the 1947 charter: such a move was made to allow Ne Win to head a caretaker government for 18 months in 1958. (He later seized power in 1962 and abolished the 1947 Consitution entirely.) For its part, the military carried an editorial in its house newspaper, Myawaddy, saying that Section 59(f) should never be changed, while U Thein Sein sent a letter to the Union parliament with repeated references to the need to abide by the terms of the military-drafted 2008 charter.

At this critical juncture, three questions arise. First, why has the NLD embarked upon a different strategy, following Suu Kyi’s pre-election pledge to install a president who would be ultimately accountable to her instead of seeking the position herself? The military’s relatively muted response to that announcement suggests that its leadership had less reservations about Suu Kyi assuming extra-constitutional authority in this manner.

Second, what concessions will the NLD be forced to offer in return? Various reports suggest that the presidentially-appointed state and region Chief Minister posts are in play. The Myanmar Times suggests that the party may be willing to accept, inter alia, the return of former general U Maung Maung Ohn to the top job in Rakhine State. The Rakhine National Party, which won a plurality in the state but is three members short of a majority, would justifiably be outraged that their preferred candidate was ignored.

Third, how would these negotiations affect the peace process? Some agreement on federal reform of the Constitution is utterly fundamental to securing a lasting peace in Myanmar. If the military agrees to waive sections of the charter in this instance, it is not hard to see the leaders of ethnic armed groups demanding a similar move, and resenting the military’s certain rejection.

Elected on a platform of transparency, the NLD’s plans remain shrouded in secrecy; as always, rumour and speculation have filled the void. A Suu Kyi presidency in April still seems implausible, but it is nonetheless a possibility being entertained by a number of usually sceptical observers. One thing we already know is that any resolution will ultimately be on the military’s terms. By the middle of next month, we will learn whether its pronouncements were non-negotiable instructions or their contribution to this game of political brinksmanship. Perhaps the NLD should hope for the former: this is the sort of game the house tends to win.