In World War I, Meiktila and Thayetmyo became the unlikely final resting places for hundreds of Ottoman Empire troops sent to Burma by the British after being captured during fighting in the Middle East.

IT’S A little-known fact that the British interned thousands of Turkish prisoners of war in Burma during World War I, and that hundreds of these citizens of the Ottoman Empire never returned home to the nation that in 1923 became the Republic of Turkey.

Their final resting place is one of two war cemeteries near the camps where they were sent following their capture in the Middle East after WWI began in 1914.

I first heard about the cemeteries over tea with a political activist in Meiktila last year as we discussed the communal violence that convulsed the dusty central Myanmar market town in March 2013.

He said a rumour had swept the Mandalay Region town ahead of the violence that the ruined cemetery was to be restored and a mosque built at the site.

I was curious to see the cemetery and a friend gave me a lift on his motorbike. The cemetery, on what residents say is military land, is not far from the centre of town and close to Meiktila Lake.

The cemetery was overgrown and it was difficult to tell where it began and ended, but we eventually found a few, damaged tombstones. We did not linger, as my friend was eager to leave an area where our presence might be regarded with suspicion.

The other Turkish war cemetery is on the bank of the Ayeyarwady River at Thayetmyo, in Magway Region’s Thayet Township. 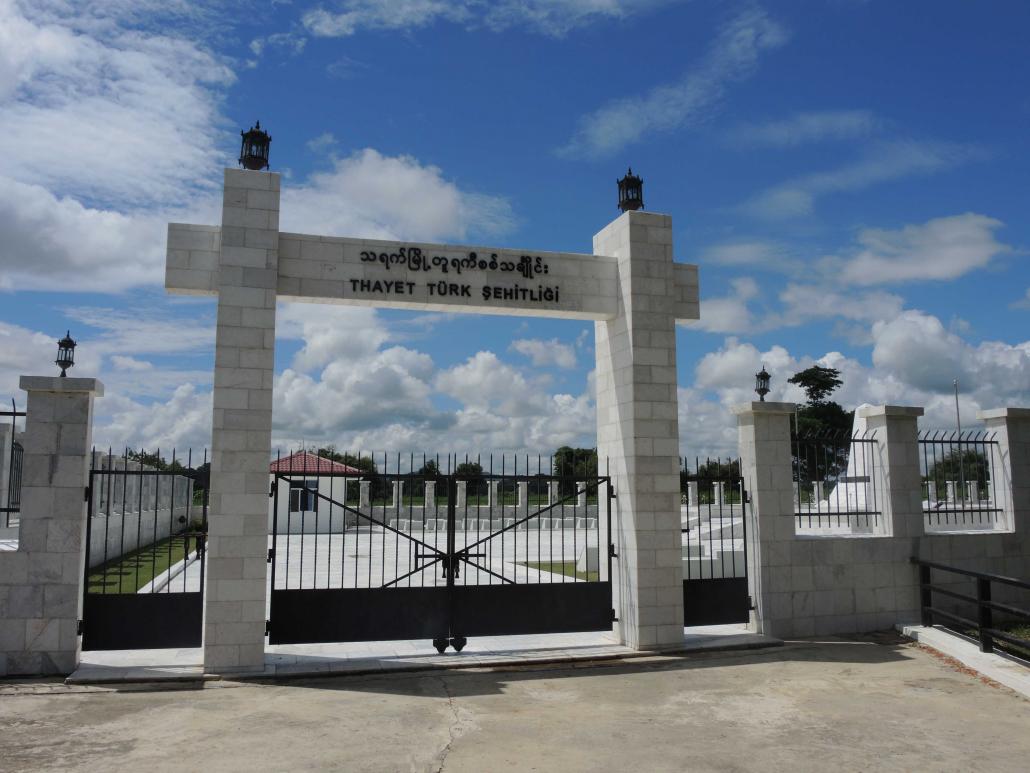 The camp at Thayetmyo housed 3,500 prisoners by 1917, when it was the largest prisoner of war camp in India and Burma. (James T Davies | Frontier)

Internment camps established by the British throughout India and Burma during WWI housed at least 12,000 POWs. Almost all of the prisoners interned in Burma, which remained a province of British India until 1937, were Ottoman Turks; up to 1,000 died in captivity of disease or other causes.

True to the rumour, plans to restore the cemeteries at Meiktila and Thayetmyo began in 2012 after relations between Turkey and Myanmar improved under the government of President U Thein Sein. Contrary to rumour, there is no indication that the plans involved building a mosque at either location.

The restoration of the cemetery at Thayetmyo has been completed, but work at Meiktila has apparently been put on hold. The upgrades were reportedly funded by the Turkish government, and in 2016 Myanmar state media reported that the Turkish embassy in Yangon had contracted a local company to undertake maintenance. The Turkish embassy did not respond to a request for comment.

Apart from Meiktila and Thayetmyo, there were smaller prison camps at Rangoon and Shwebo, in Sagaing Region about 112 kilometres (70 miles), north of Mandalay.
The Rangoon camp was a quarantine facility for arriving prisoners, most of whom began their long journeys to the camps by boat from Basra, Iraq, to either Karachi or Bombay, from where they travelled by train to Calcutta and then had another three days at sea to Rangoon. POWs destined for Thayetmyo were transported up the Ayeyarwady on barges towed by Irrawaddy Flotilla Company vessels, while those sent to Meiktila travelled by train.

Sick prisoners were sent to the Shwebo camp to benefit from its dry climate. It was “one of the best” in Burma, the Red Cross said in a 1917 report that is one of the few remaining sources of information about the prison camps.

A few weeks after leaving Meiktila I travelled to Thayetmyo (also known as Thayet). The road north to the cemetery runs beside the Ayeyarwady and is lined by the mango trees (thayet pin) that give the town its name.

The renovated cemetery is an impressive sight, but the gate was locked. The guards said they did not have the authority to admit foreigners, so we strolled the perimeter. A high fence surrounds immaculately tended lawns where white marble tombstones pay poignant tribute to those they honour. Turkish dignitaries are frequent visitors to the cemetery, located between farmers’ huts and fields where cattle graze. A recently resurfaced road lines the path to the cemetery.

The camp at Thayetmyo housed 3,500 prisoners by 1917 and was then the largest of any of the WWI POW camps in India and Burma.

Prisoners at Thayetmyo told the Red Cross they were treated well but lamented separation from their families and the loss of liberty and livelihoods, and complained of boredom. The prisoner’s general acceptance of their situation was characterised by the Red Cross as “Oriental fatalism”.

It is difficult to imagine such a rural location as the site of a POW camp about 100 years ago, much less one built to hold men from the other side of the world.

Prisoners at Thayetmyo spent their time raising chickens, playing cards or draughts, and arranging sporting competitions to keep fit and healthy. They also kept busy writing letters to send home; about 10,000 a month, the Red Cross report shows. Officers had their own mess on the riverbank where they enjoyed music, painting and billiards. They all probably enjoyed the abundance of mangoes. 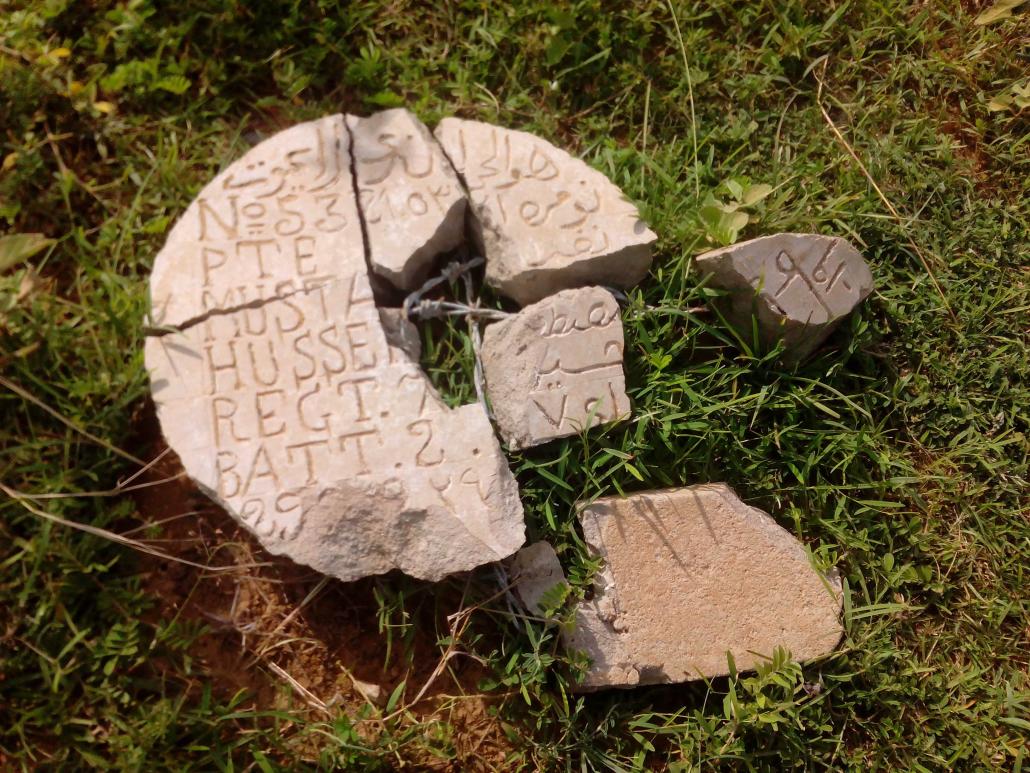 A broken headstone at the unrenovated cemetery in Meiktila. (James T Davies | Frontier)

The prisoners published a newsletter, but longed for Turkish books. Some sources say men from the camp were sent to Maymyo, now Pyin Oo Lwin, to help build the Kandawgyi Botanical Gardens, but this has not been confirmed. A request by the POWs to attend a mosque in Thayetmyo was denied by the British because, according to the Red Cross report, they were afraid it would inflame religious tensions.

Reading the report seemed to bring me full-circle to the communal violence in Meiktila in 2013 and the rumour that preceded it about restoring the cemetery.

I spoke to people in Meiktila who stressed that the rumours about the cemetery were due to a misunderstanding. This had exacerbated tension in the town between Buddhists and Muslims, which was already strained by the violence in Rakhine State.

At a time of growing Buddhist nationalism and anti-Muslim sentiment, issues unrelated to community relations had been reinterpreted and taken on a communal meaning.

“There are no Turkish Muslims here in Meiktila, but we were worried by the rumours about the new cemetery,” said a Muslim community leader who asked not to be named. He said he knew nothing about the cemetery restoration until he heard the rumours.

The history of the prison camps, and those who died while confined to them, deserves more attention and their restoration is an important step. Some history is already lost, as shown by the many tombs at Thayetmyo dedicated to “unknown martyrs”. 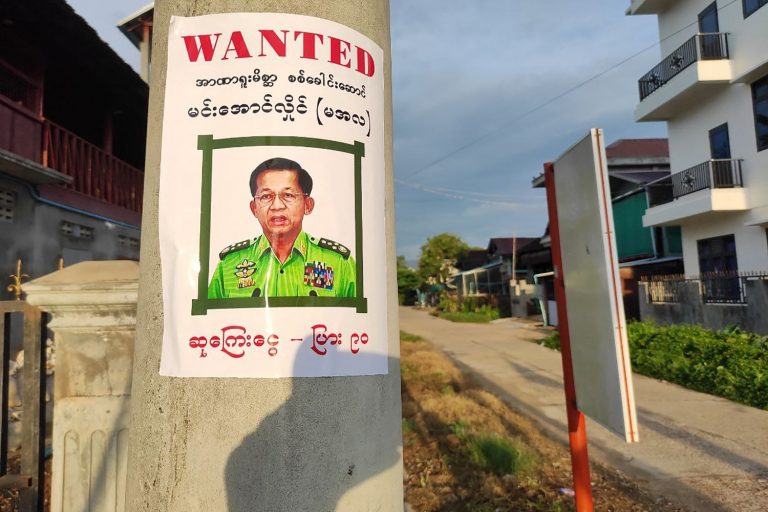