The birds and birdwatchers of Indawgyi Lake

Indawgyi Lake in Kachin State is a wintering season stop-over for thousands of migratory birds and is enchanting an increasing number of bird lovers.

“HERE, take it,” said the young woman on the cool, misty terrace of the Shwe Myit Zu Pagoda on Indawgyi Lake, in Kachin State’s Mohnyin Township. She held out a big bag of popcorn, as a mewling flock of seagulls swarmed around her.

A shopkeeper at Hopin town, about 30 kilometres away, Ma Hnin Hnin, 26, said she usually comes to the pagoda at this time every year just to feed the seagulls. “It’s a type of offering and the seagulls are not here every time I visit,” she said. “I love birds and I’m so fond of watching them.” 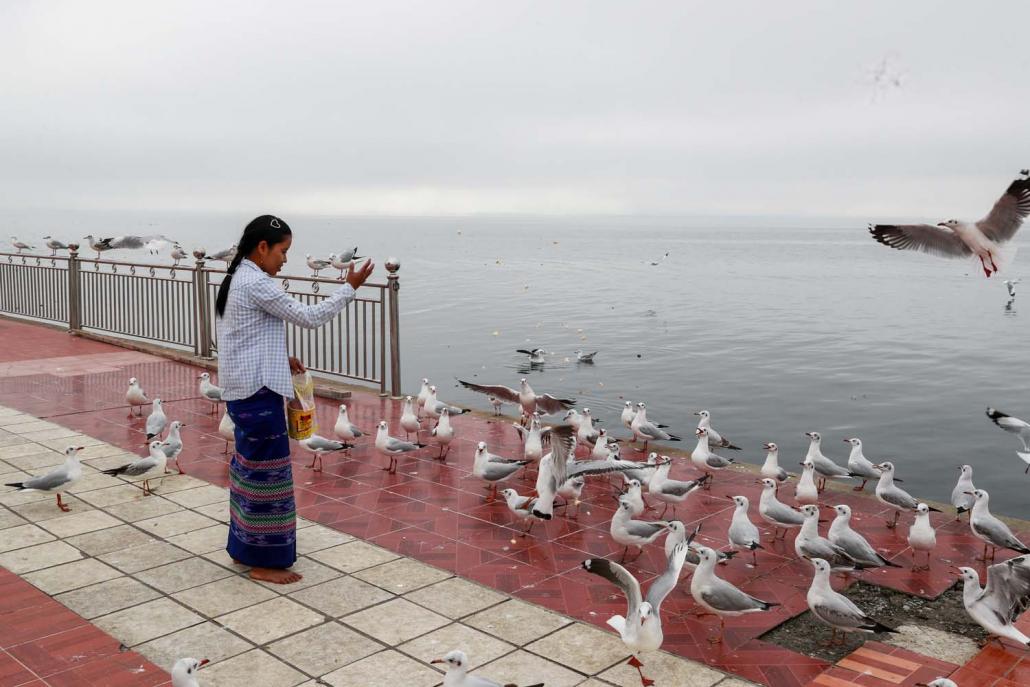 She is not alone. Indawgyi Lake is a paradise for bird lovers – and not just those fond of seagulls. More than 450 species of birds have been recorded at the lake, and up to 20,000 birds counted in a day.

The largest freshwater lake in Myanmar and one of the biggest in Southeast Asia is the centrepiece of the Indawgyi Lake Wildlife Sanctuary in Mohnyin Township. The area is largely untouched by tourism and visitors are rewarded by scenic views of nearby mountains and the sound of birdsong. The lake is also becoming an adventure tourism destination, with trekking, kayaking and cycling on offer, as well as bird-watching. 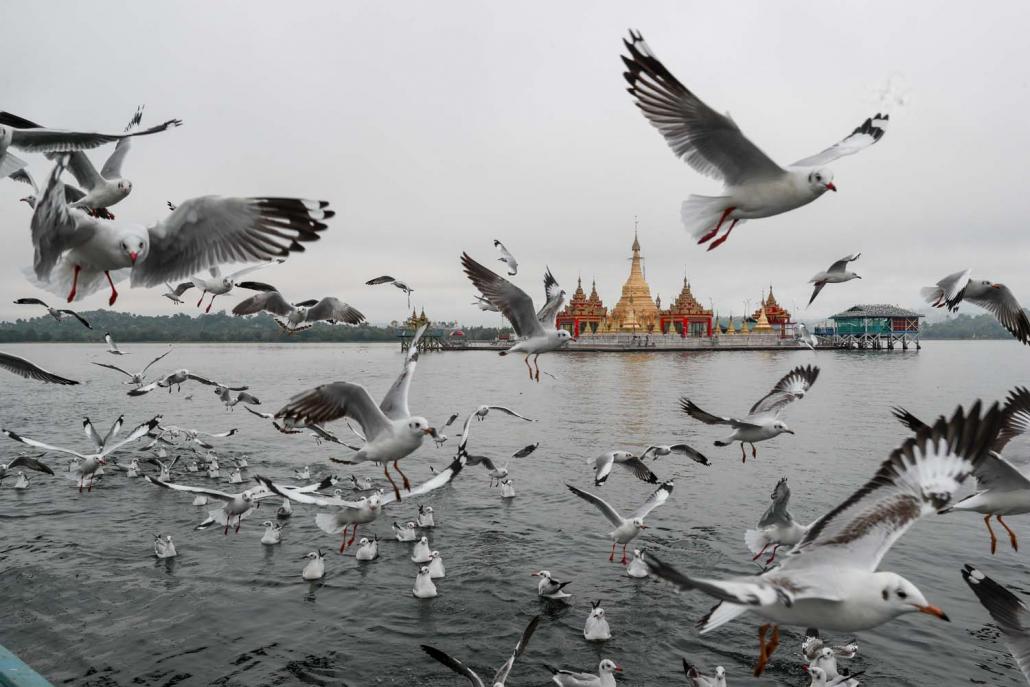 Some of these visitors are “twitchers”, as bird watchers are known, who come from around the world in increasing numbers to indulge their pastime at Indawgyi Lake. And no wonder: the lake is on one of our planet’s biggest bird migration routes, extending from Arctic Russia and North America, to the southern limits of Australia and New Zealand. 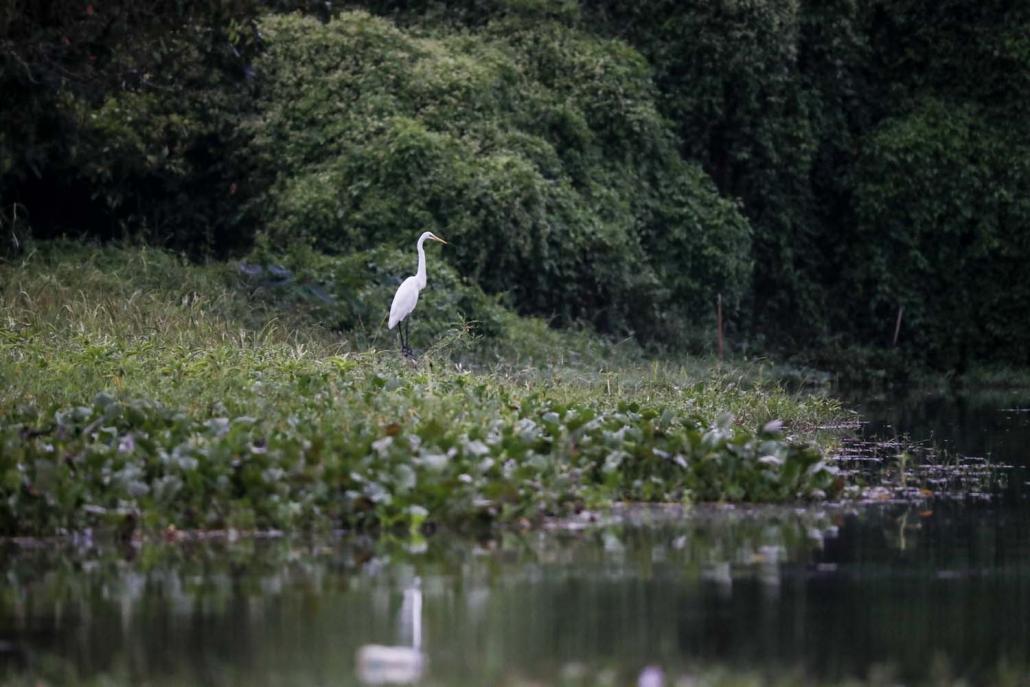 In February 2016, the lake was declared a Ramsar site, one of more than 2,230 wetland areas in 169 countries designated as being of international importance under the Ramsar Convention. In September 2017, it was designated a UNESCO Biosphere Reserve by the United Nations Educational Scientific and Cultural Organization.

“This is the only place [in Myanmar] where you can see so many different species of water bird,” said U Maung Win, an administrator at the Indawgyi Lake Wildlife Sanctuary. Rare and endangered species sighted at the lake include the Oriental darter (Anhinga melanogaster), Purple swamphen (Porphyrio porphyrio), White-rumped vulture (Gyps bengalensis), and Spot-billed pelican (Pelecanus philippensis). 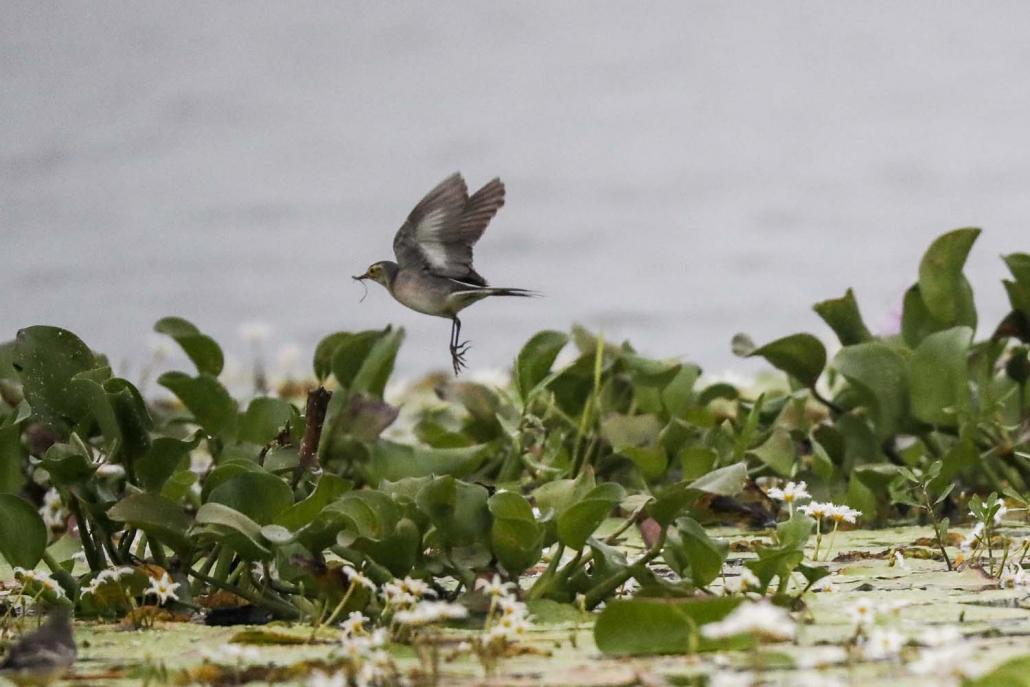 The best time for bird watching is during the peak of the wintering season from late January to February, but migratory birds can be found from November through to March. 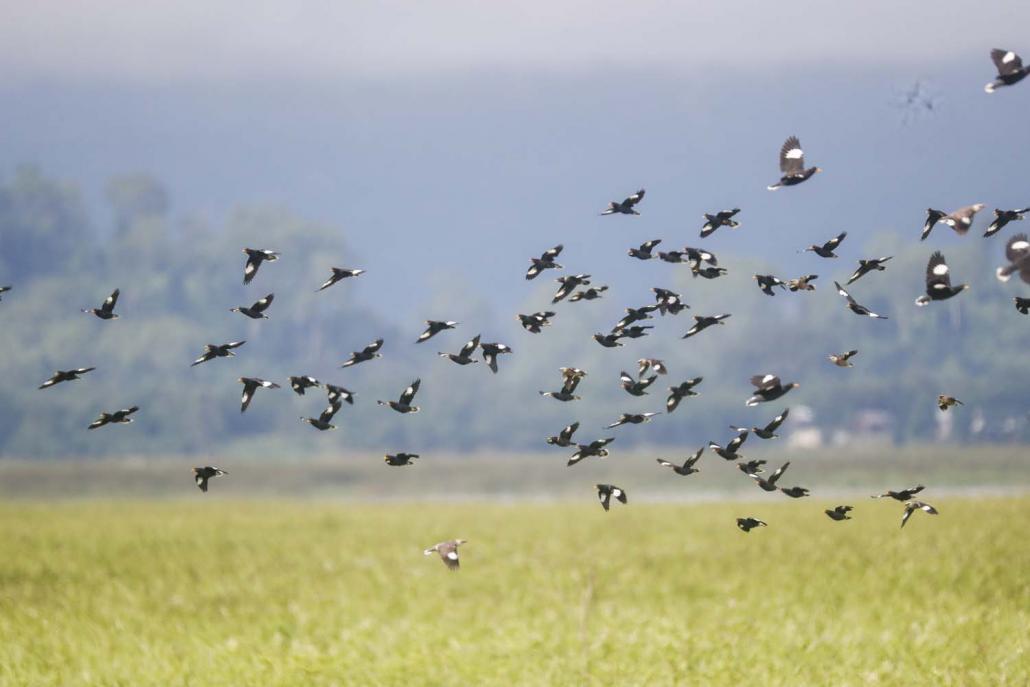 But since late 2017 the number of domestic visitors has roughly tripled, according to Ko Htun Htun Oo, 24, who has been a guide at the lake for about six years. He said this was mostly because some prominent travel bloggers had visited Indawgyi and promoted it to their readers, but also because of better road connections to Mandalay and Myitkyina.

Htun Htun Oo said a few foreign visitors behaved inappropriately in an effort to capture better photos of the birds. 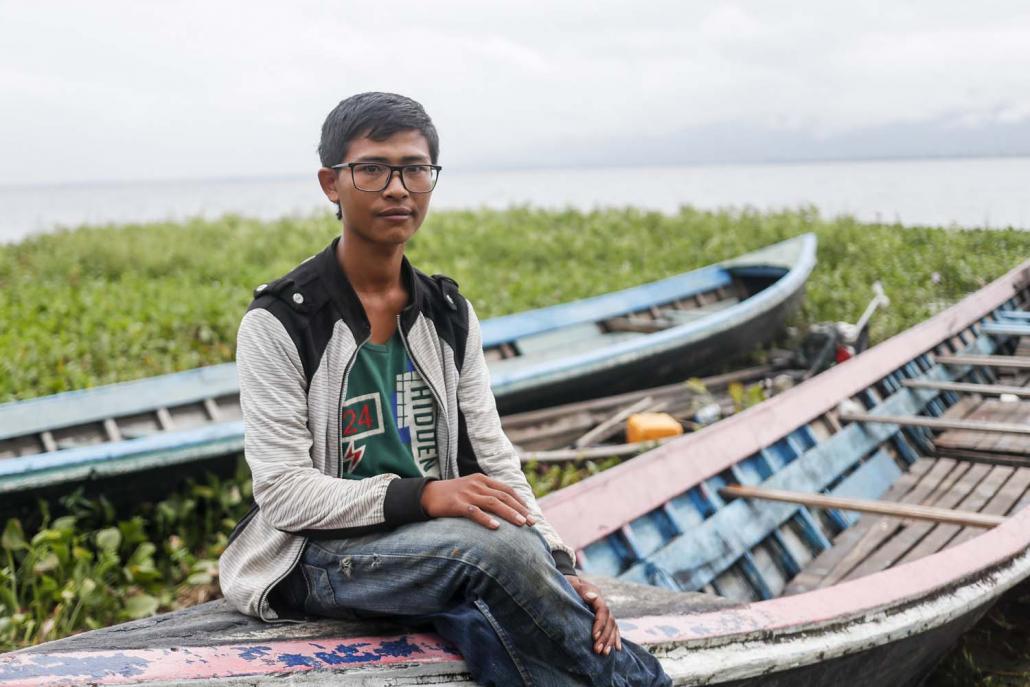 “When I am guiding tourists they want to take photos but they don’t know the nature of birds,” he told Frontier. “If they don’t spot any birds, they play recordings of birds to try to get them to leave their nests. The recordings are bad for the birds. Some birds come here to breed but when they hear the recordings, they become agitated and it disturbs their breeding cycle.”

Some local residents have been bad for the birds, too. When the number of migrating birds at the lake is at its highest, village children are known to hunt them with catapults. “It’s like their hobby; if they kill a bird they usually cook and eat it. The bird season is more than three months and a lot of birds are killed,” Htun Htun Oo said. 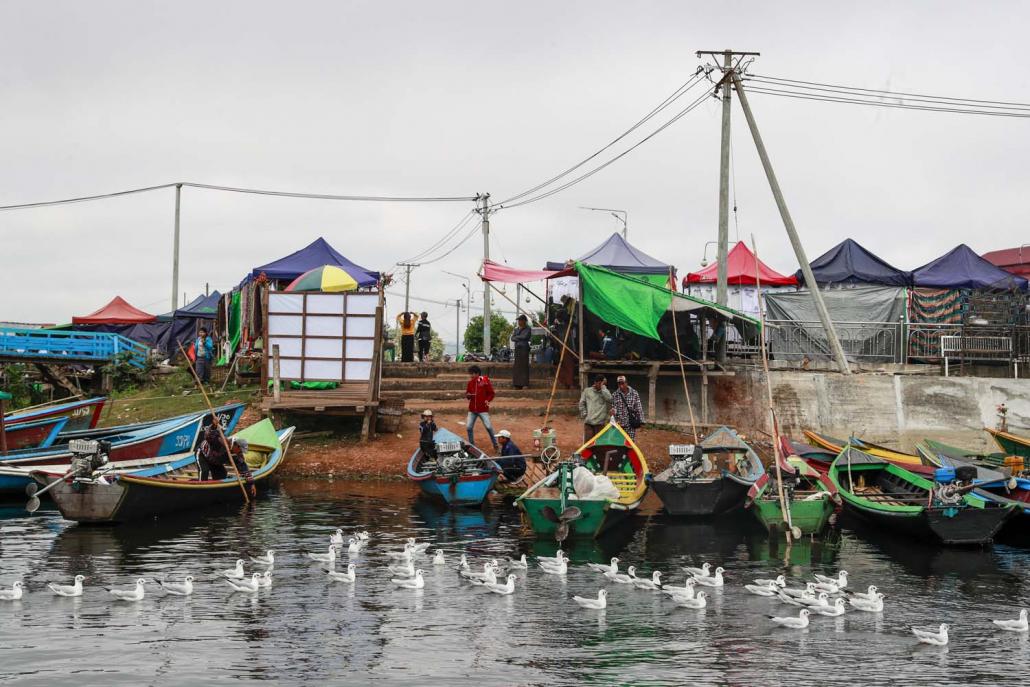 Inn Chit Thu has been working to raise awareness about nature and conservation with the support of British-based INGO Fauna and Flora International, which has been active at Indawgyi since 2008.

Inn Chit Thu has provided educational presentations and taught basic bird-watching techniques to students and teachers at primary and middle schools at some of the villages around the lake. 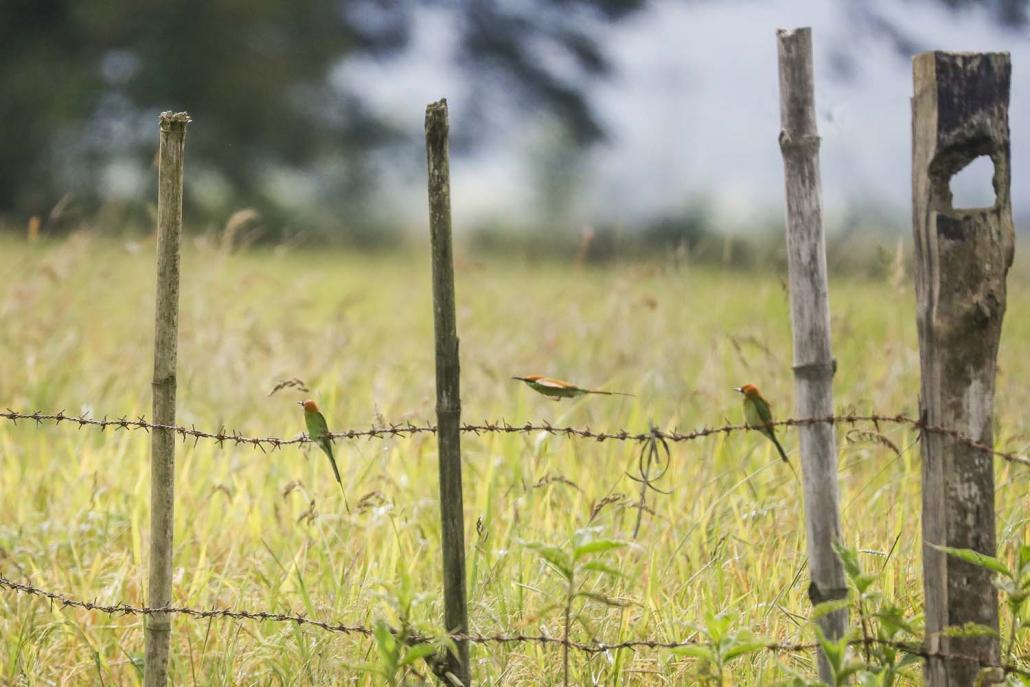 “We want them to understand that it’s better to love the birds and not kill them,” Inn Chit Thu member Ko Paw Lay told Frontier. “It’s like changing their hobby; if they enjoy observing nature they can become a bird guide, like me, and we can make money from it.”

More than six years ago, hunters from some of the villages around the lake were supplementing their income by using nets to snare rare species, such as Lesser whistling ducks (Dendrocygna javanica). 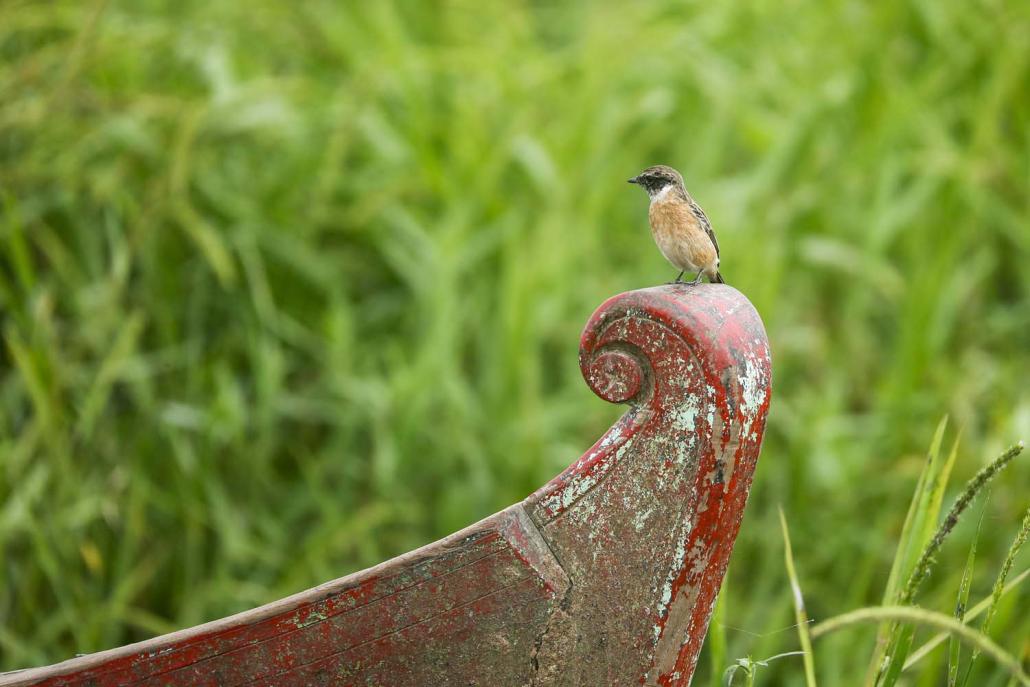 “Bird catching was at its worst then,” said Paw Lay, “but in 2014 most of the villagers attended bird-watching classes, which enabled them to appreciate the migrating birds as living creatures and realise they can make money as guides.”