BANGKOK — A Thai general, police officers and local politicians were among dozens jailed for human trafficking on Wednesday, many handed decades-long sentences, at a mass trial exposing official complicity in the grim trade in Rohingya and Bangladeshi migrants.

The junta launched a crackdown in May 2015 on a network of corrupt officials and gangmasters who made millions funnelling desperate migrants through southern Thailand and onto Malaysia, holding some for ransom in jungle camps.

It unspooled a crisis across Southeast Asia as traffickers abandoned their human cargo in the camps where hundreds died from starvation and malaria, and at sea in overcrowded boats which were then “ping ponged” between Thai, Malaysian and Indonesian waters.

The most senior government figure among the 62 people convicted on Wednesday was Lieutenant-General Manas Kongpan, who received 27 years for multiple human trafficking charges and other offences.

A judge at Bangkok Criminal Court said he was also guilty of complicity in a “transnational organised crime” network and “worked with others to facilitate human trafficking”.

It is extremely rare for senior military figures in Thailand to see the inside of a courtroom, let alone a jail.

Others received even more severe punishments. One Myanmar national who helped run the jungle camps got 94 years in jail, at least 17 others got terms more than seven decades long. Under Thai law, however, the maximum sentence a prisoner serves is 50 years.

Manas was a top figure in the security apparatus covering Thailand’s south – a key transit zone in a trafficking trail that stretched from Myanmar to Malaysia.

The court heard he received bank transfers from trafficking agents worth 14.8 million baht ($440,000).

But the police investigation found he also used his position to guide trafficking gangs around checkpoints after their arrival on remote beaches as they headed to the jungle camps.

In 2013 he was promoted to head the Internal Security Operations Command (ISOC) for the entire south. Current junta leader Prayut Chan-Ocha was army chief at the time.

Before the crackdown rights groups had long accused officials of ignoring – and even conducting – the trade in humans through Thailand’s southern provinces.

The trial revealed a lattice of military, police, local political and mafia figures acting as traffickers, agents and logistics men, all soaking up cash from some of Asia’s poorest migrants. 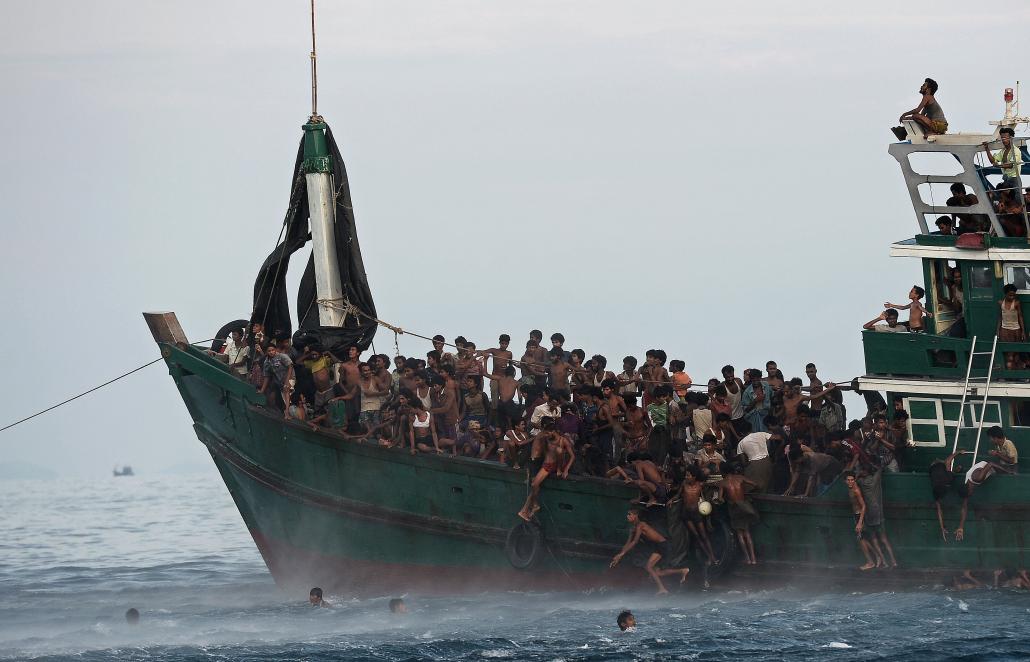 Rohingya migrants jump to collect food supplies dropped by a Thai army helicopter from a boat drifting in Thai waters off the southern island of Koh Lipe in the Andaman Sea in May 2015. (AFP)

Media were barred from the court itself, relying instead on an audio relay of the complex proceedings.

Judges placed heavy reporting restrictions on much of the testimony, citing national security concerns. But the case has still lifted the lid on the power networks dominating southern Thailand.

Police accused him of using private Andaman Sea islands, close to tourist spots such as Koh Lipe, to shift boatloads of migrants to the mainland, where they were packed into lorries and taken to the fetid camps straddling the Malaysia border.

He was found guilty of human trafficking and links to organised crime with judges giving him 75 years.

Throughout the marathon sentencing hearing dozens of people, including two police officers, were convicted of various offences, ranging from guarding the squalid migrant camps to trafficking and negligence.

Some 40 defendants were acquitted including an army captain and a senior police officer while one died awaiting trial.

The verdict is being closely-watched inside and outside Thailand.

The government is desperate to dispel the kingdom’s notorious reputation for human trafficking and close one of the darkest chapters in the country’s recent history.

“Manas alone will not make the entire military collapse,” he told reporters.

Critics say the case was prematurely concluded and describe a trial marred by witness intimidation, secret evidence hearings and restrictions on media reporting.

“We expect there are many more perpetrators out there,” Amy Smith, from Fortify Rights, told AFP.

“This is a big business with big money.” 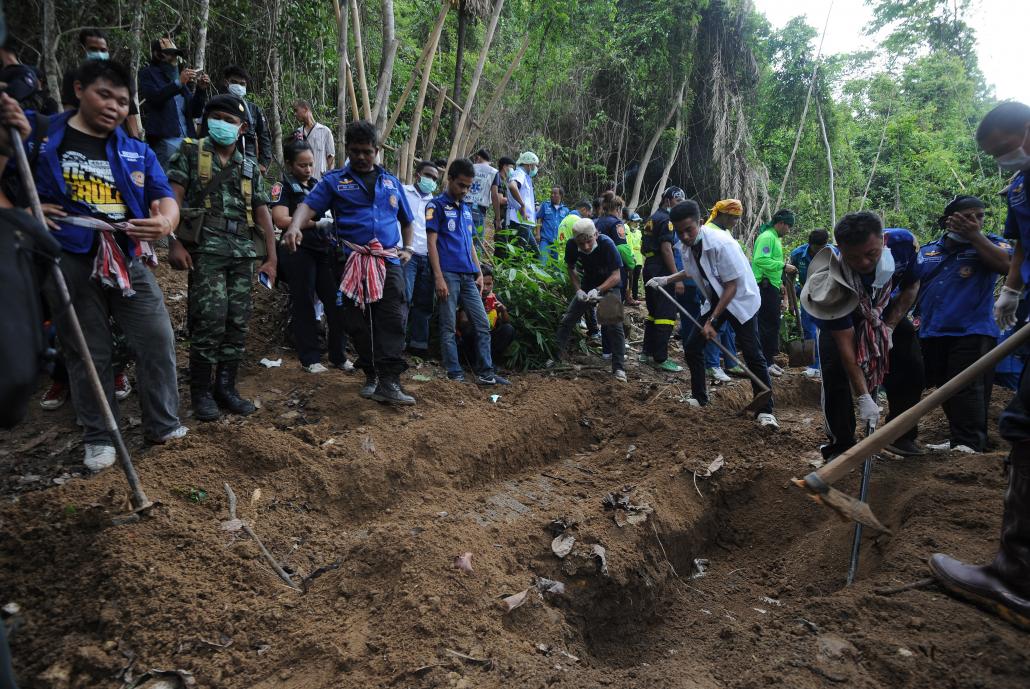 Rescue workers and forensic officials dig out the skeletons of human trafficking victims from shallow graves at an abandoned jungle camp in Thailand’s southern Songkhla province, May 2015. (AFP)

The senior policeman who initially headed the investigation, Major General Paween Pongsirin, fled Thailand under threats to his life.

Days before he left he told AFP the case had been pulled before it could delve further into the complicity of officials.

Stateless Rohingya Muslims have fled neighbouring Myanmar in their tens of thousands since sectarian violence flared in 2012.

They were joined by Bangladeshi economic migrants on a rickety boats southwards across the Andaman Sea, seeking work and sanctuary in Malaysia and Indonesia.

Thousands are believed to have died at sea, in a migrant flow that garnered few headlines until the trafficking crackdown in 2015.